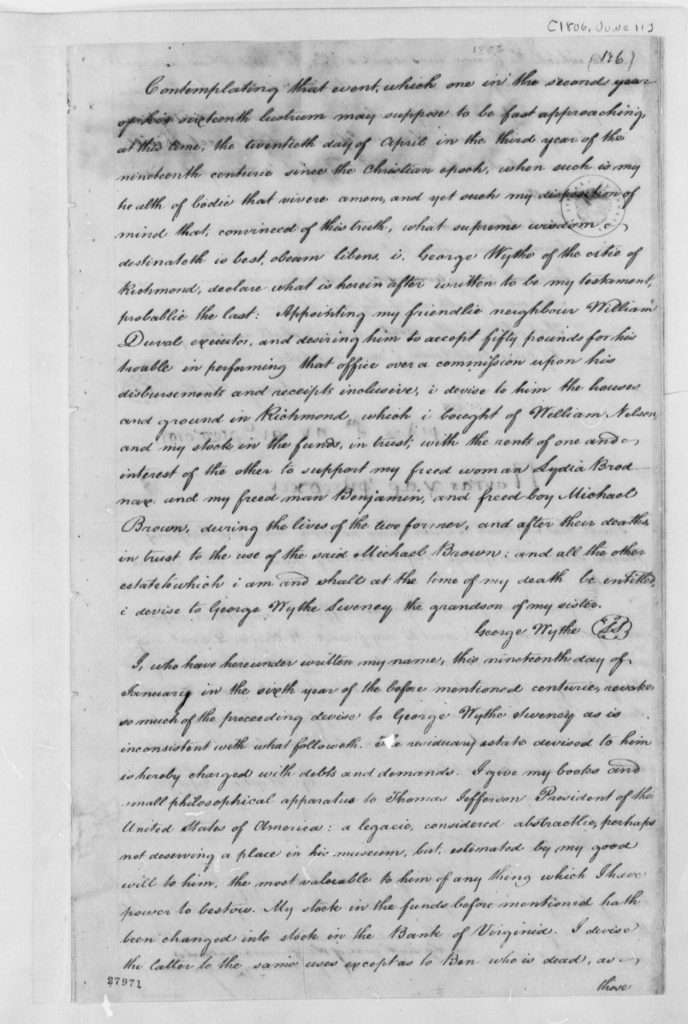 Contemplating that event, which one in the second year of his sixteenth lustrum may suppose to be fast approaching, at this time, the twentieth day of April in the third year of the nineteenth centurie since the Christian epoch, when such is my health of bodie that vivere amem, and yet, such my disposition of mind that, convinced of this truth, what supreme wisdom destinateth is best, obeam libens, i, George Wythe of the citie of Richmond, declare what is herein after written to be my testament, probablie the last: Appointing my friendlie neighbour William Duval executor, and desiring him to accept fifty pounds for his trouble in performing that office over a commission upon his disbursements and receipts inclusive, i devise to him the houses and ground in Richmond, which i bought of William Nelson, and my stock in the funds, in trust, with the rents of one and interest of the other to support my freed woman Lydia Brodnax, and my freed man Benjamin, and freed boy Michael Brown, during the lives of the two former, and after their deaths in trust to the use of the said Michael Brown; and all the other estate to which i am and shall at the time of my death be entitled i devise to George Wythe Sweney the grandson of my sister.

I, who have here under written my name, this nineteenth day of January in the sixth year of the before mentioned centurie, revoke so much of the preceding devise to George Wythe Sweney as is inconsistent with what followeth. The residuarie estate devised to him is hereby charged with debts and demands. I give my books and small philosophical apparatus to Thomas Jefferson President of the United States of America: a legacie considered abstractlie; perhaps not deserving a place in his museum, but, estimated by my good will to him, the most valuable to him of anything which I have power to bestow. My stock in the funds before mentioned hath been changed into stock in the Bank of Virginia. I devise the latter to the same uses except as to Ben who is dead, as 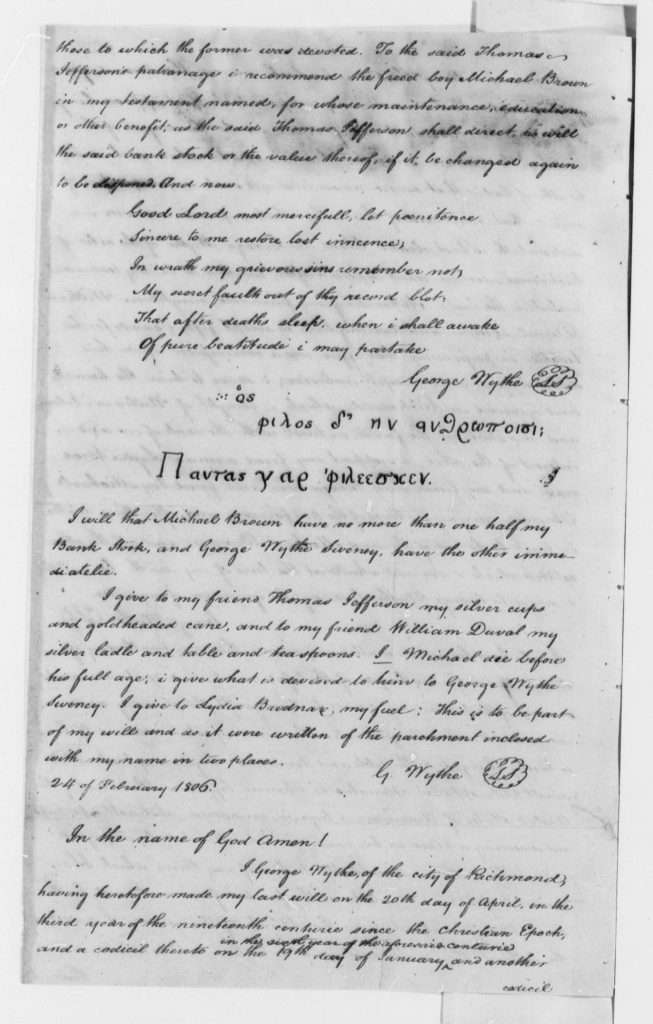 Sincere to me restore lost innocence;

In wrath my grievous sins remember not;

My secret faults out of thy record blot,

That after deaths sleep, when i shall awake

Of pure beatitude i may partake

I will that Michael Brown have no more than one half my Bank Stock, and George Wythe Sweney, have the other immediatelie.

I give to my friend Thomas Jefferson my silver cups and goldheaded cane, and to my friend William Duval my silver ladle and table and teaspoons. If Michael die before his full age, i give what is devised to him to George Wythe Sweney. I give to Lydia Brodnax my fuel: This is to be part of my will and as it were written of the parchment inclosed with my name in two places.

In the name of God Amen!

I, George Wythe, of the city of Richmond, having heretofore made my last will on the 20th day of April, in the third year of the nineteenth centurie since the Christian Epoch, and a codicil thereto on the 19th day of January in the sixth year of the aforesaid centurie and another 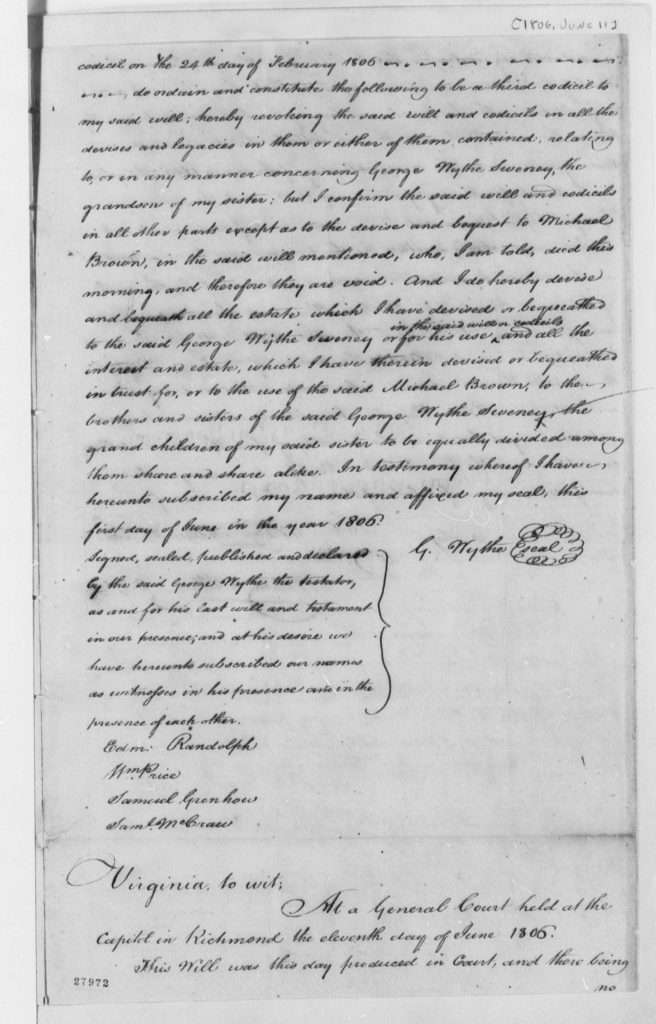 codicil on the 24th day of February 1806—do ordain and constitute the following to be a third codicil to my said will; hereby revoking the said will and codicils in all the devises and legacies in them or either of them contained, relating to, or in any manner concerning George Wythe Sweney, the grandson of my sister; but I confirm the said will and codicils in all other parts except as to the devise and bequest to Michael Brown, in the said will mentioned, who, I am told, died this morning, and therefore they are void. And I do hereby devise and bequeath all the estate which I have devised or bequeathed to the said George Wythe Sweney or for his use in the said will or codicils and all the interest and estate, which I have therein devised or bequeathed in trust for, or to the use of the said Michael Brown, to the brothers and sisters of the said George Wythe Sweney, the grand children of my said sister to be equally divided among them share and share alike. In testimony whereof I have hereunto subscribed my name and affixed my seal, this first day of June in the year 1806.

Signed, sealed, published and declared by the said George Wythe the testator, as and for his last will and testament in our presence; and at his desire we have hereunto subscribed our names as witnesses in his presence and in the presence of each other.

At a General Court held at the Capitol in Richmond the eleventh day of June 1806.

This Will was this day produced in Court, and there being 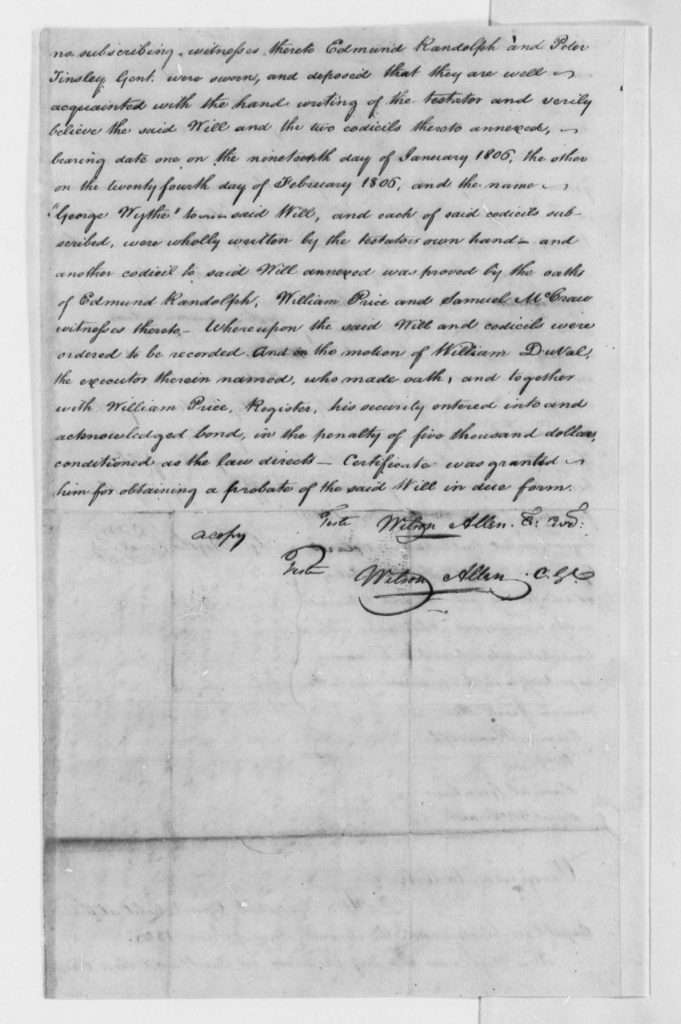 no subscribing witnesses thereto Edmund Randolph and Peter Tinsley Gent. were sworn, and deposed that they are well acquainted with the hand writing of the testator and verily believe the said Will and the two codicils thereto annexed,—bearing date one on the nineteenth day of January 1806, the other on the twenty fourth day of February 1806, and the name “George Wythe” to said Will, and each of said codicils subscribed, were wholly written by the testators own hand—and another codicil to said Will annexed was proved by the oaths of Edmund Randolph, William Price and Samuel McCraw witnesses thereto—Whereupon the said Will and codicils were ordered to be recorded. And on the motion of William Duval, the executor therein named, who made oath, and together with William Price, Register, his security entered into and acknowledged bond, in the penalty of five thousand dollars, conditioned as the law directs—Certificate was granted him for obtaining a probate of the said Will in due form.