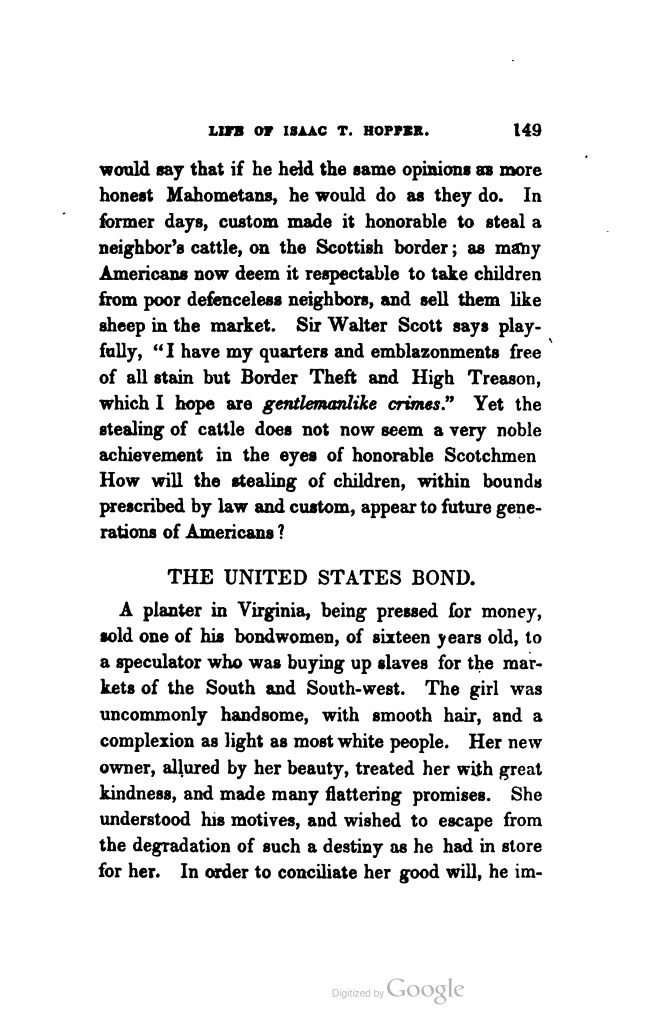 A planter in Virginia, being pressed for money, sold one of his bondwomen, of sixteen years old, to a speculator who was buying up slaves for the markets of the South and South-west. The girl was uncommonly handsome, with smooth hair, and a complexion as light as most white people. Her new owner, allured by her beauty, treated her with great kindness, and made many flattering promises. She understood his motives, and wished to escape from the degradation of such a destiny as he had in store for her. In order to conciliate her good will, he im- 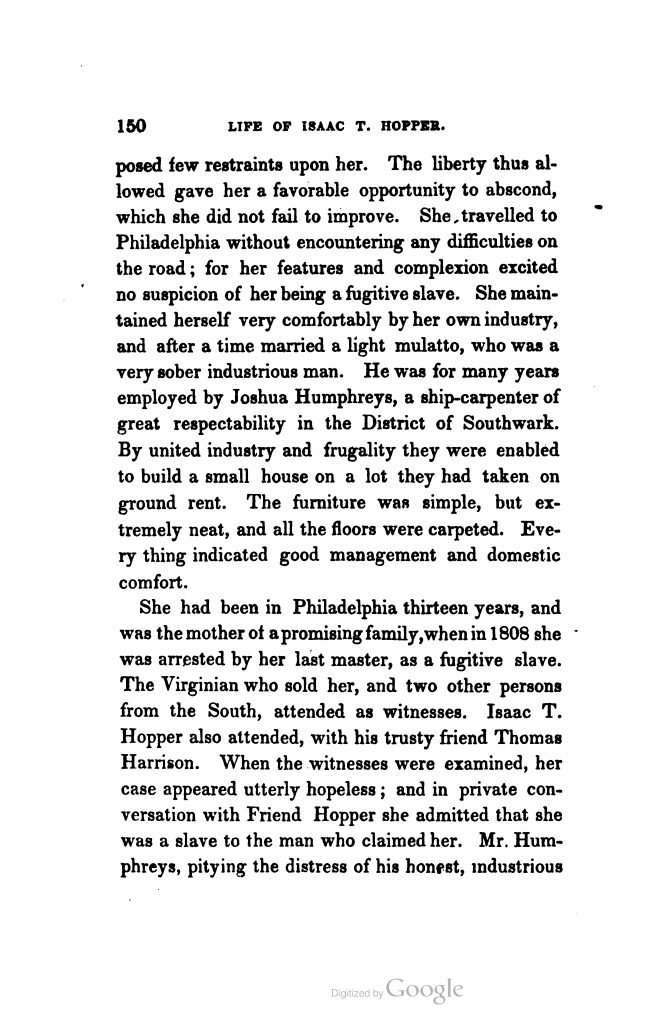 posed few restraints upon her. The liberty thus allowed gave her a favorable opportunity to abscond, which she did not fail to improve. She travelled to Philadelphia without encountering any difficulties on the road; for her features and complexion excited no suspicion of her being a fugitive slave. She maintained herself very comfortably by her own industry, and after a time married a light mulatto, who was a very sober industrious man. He was for many years employed by Joshua Humphreys, a ship-carpenter of great respectability in the District of Southwark. By united industry and frugality they were enabled to build a small house on a lot they had taken on ground rent. The furniture was simple, but extremely neat, and all the floors were carpeted. Every thing indicated good management and domestic comfort.

She had been in Philadelphia thirteen years, and was the mother of a promising family, when in 1808 she was arrested by her last master, as a fugitive slave. The Virginian who sold her, and two other persons from the South, attended as witnesses. Isaac T. Hopper also attended, with his trusty friend Thomas Harrison. When the witnesses were examined, her case appeared utterly hopeless; and in private conversation with Friend Hopper she admitted that she was a slave to the man who claimed her. Mr. Humphreys, pitying the distress of his honest, industrious 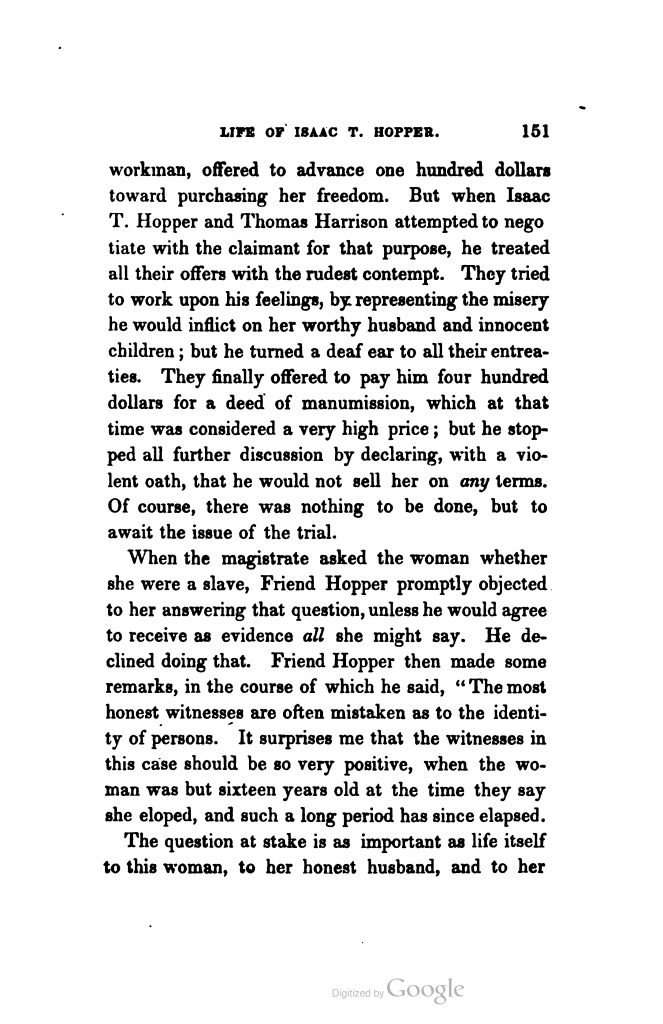 workman, offered to advance one hundred dollars toward purchasing her freedom. But when Isaac T. Hopper and Thomas Harrison attempted to negotiate with the claimant for that purpose, he treated all their offers with the rudest contempt. They tried to work upon his feelings, by representing the misery he would inflict on her worthy husband and innocent children; but he turned a deaf ear to all their entreaties. They finally offered to pay him four hundred dollars for a deed of manumission, which at that time was considered a very high price; but he stopped all further discussion by declaring, with a violent oath, that he would not sell her on any terms. Of course, there was nothing to be done, but to await the issue of the trial.

When the magistrate asked the woman whether she were a slave, Friend Hopper promptly objected to her answering that question, unless he would agree to receive as evidence all she might say. He declined doing that. Friend Hopper then made some remarks, in the course of which he said, “The most honest witnesses are often mistaken as to the identity of persons. It surprises me that the witnesses in this case should be so very positive, when the woman was but sixteen years old at the time they say she eloped, and such a long period has since elapsed.

[“]The question at stake is as important as life itself to this woman, to her honest husband, and to her 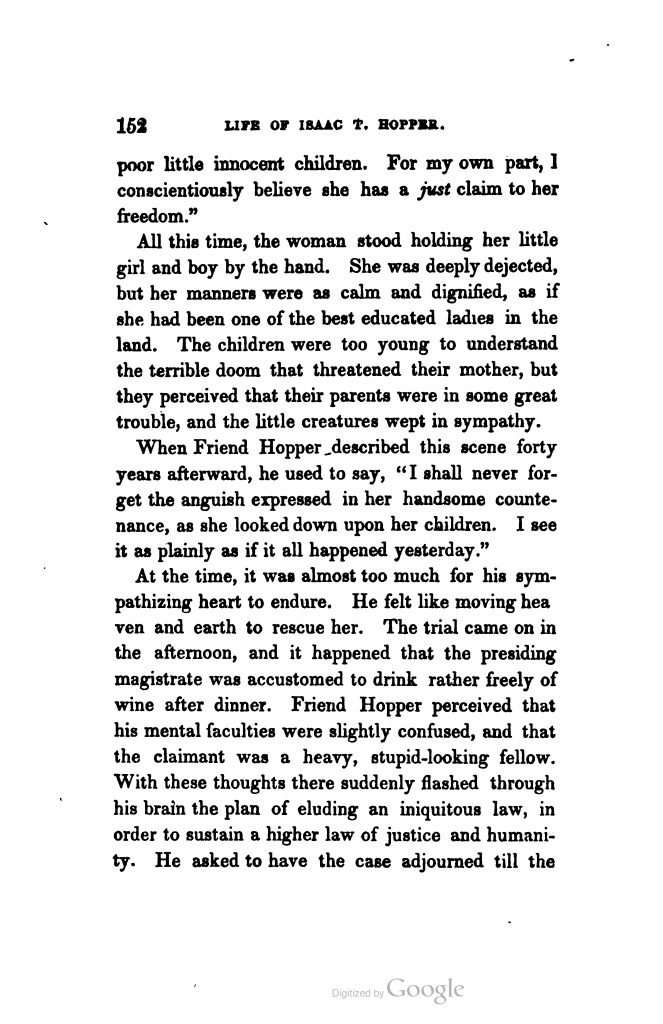 poor little innocent children. For my own part, 1 conscientiously believe she has a just claim to her freedom.”

All this time, the woman stood holding her little girl and boy by the hand. She was deeply dejected, but her manners were as calm and dignified, as if she had been one of the best educated ladies in the land. The children were too young to understand the terrible doom that threatened their mother, but they perceived that their parents were in some great trouble, and the little creatures wept in sympathy.

When Friend Hopper described this scene forty years afterward, he used to say, “I shall never forget the anguish expressed in her handsome countenance, as she looked down upon her children. I see it as plainly as if it all happened yesterday.”

At the time, it was almost too much for his sympathizing heart to endure. He felt like moving heaven and earth to rescue her. The trial came on in the afternoon, and it happened that the presiding magistrate was accustomed to drink rather freely of wine after dinner. Friend Hopper perceived that his mental faculties were slightly confused, and that the claimant was a heavy, stupid-looking fellow. With these thoughts there suddenly flashed through his brain the plan of eluding an iniquitous law, in order to sustain a higher law of justice and humanity. He asked to have the case adjourned till the 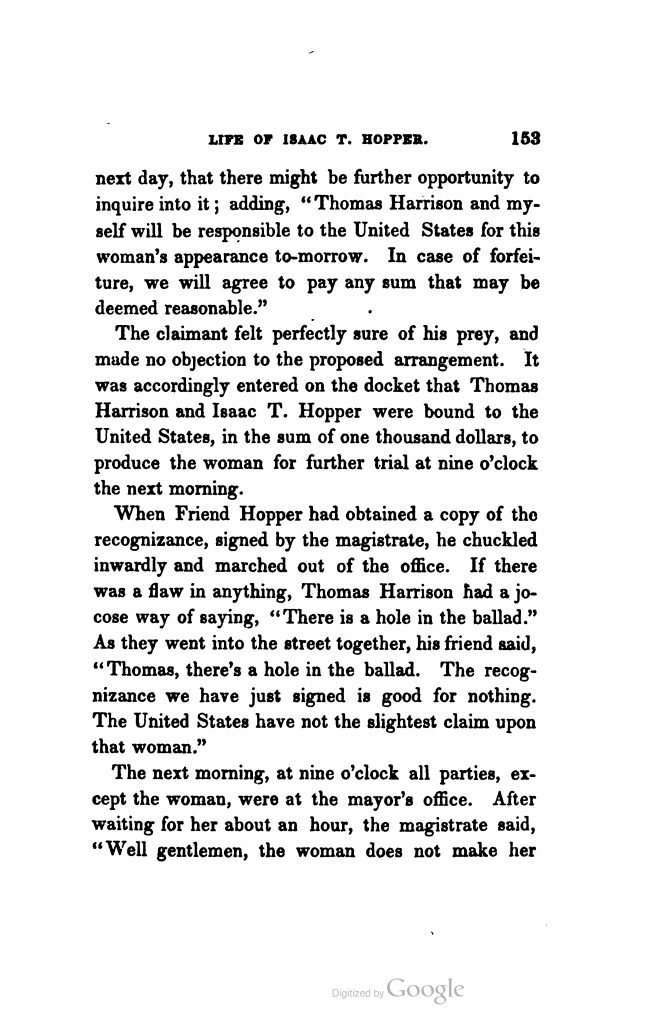 next day, that there might be further opportunity to inquire into it; adding, “Thomas Harrison and myself will be responsible to the United States for this woman’s appearance to-morrow. In case of forfeiture, we will agree to pay any sum that may be deemed reasonable.”

The claimant felt perfectly sure of his prey, and made no objection to the proposed arrangement. It was accordingly entered on the docket that Thomas Harrison and Isaac T. Hopper were bound to the United States, in the sum of one thousand dollars, to produce the woman for further trial at nine o’clock the next morning.

When Friend Hopper had obtained a copy of the recognizance, signed by the magistrate, he chuckled inwardly and marched out of the office. If there was a flaw in anything, Thomas Harrison had a jocose way of saying, “There is a hole in the ballad.” As they went into the street together, his friend said, “Thomas, there’s a hole in the ballad. The recognizance we have just signed is good for nothing. The United States have not the slightest claim upon that woman.”

The next morning, at nine o’clock all parties, except the woman, were at the mayor’s office. After waiting for her about an hour, the magistrate said, “Well gentlemen, the woman does not make her 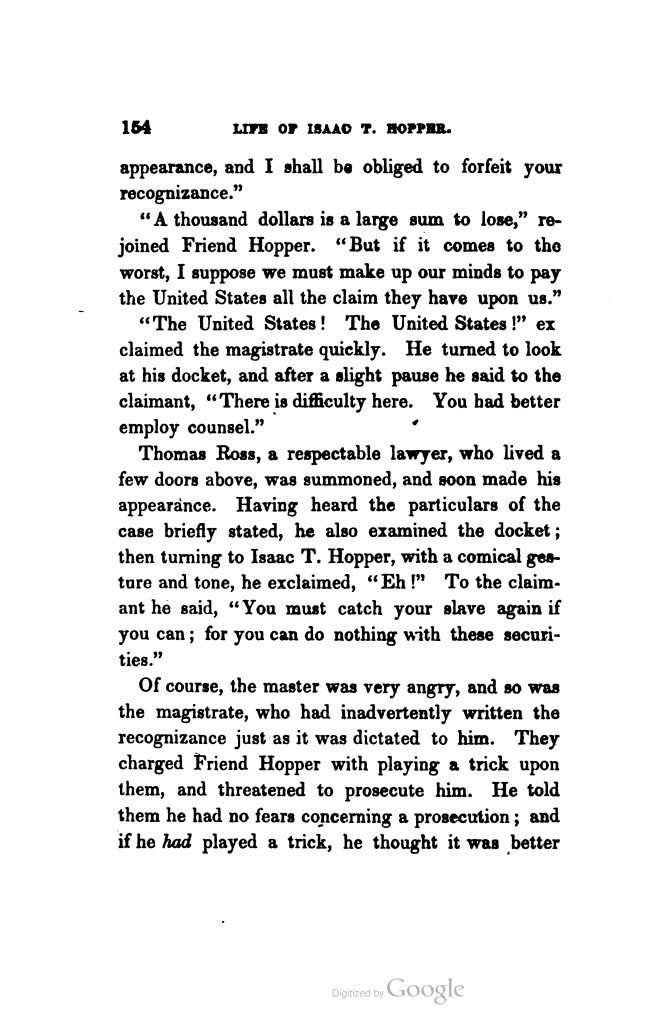 appearance, and I shall be obliged to forfeit your recognizance.”

“A thousand dollars is a large sum to lose,” rejoined Friend Hopper. “But if it comes to the worst, I suppose we must make up our minds to pay the United States all the claim they have upon us.”

“The United States! The United States!” exclaimed the magistrate quickly. He turned to look at his docket, and after a slight pause he said to the claimant, “There is difficulty here. You had better employ counsel.”

Thomas Ross, a respectable lawyer, who lived a few doors above, was summoned, and soon made his appearance. Having heard the particulars of the case briefly stated, he also examined the docket; then turning to Isaac T. Hopper, with a comical gesture and tone, he exclaimed, “Eh!” To the claimant he said, “You must catch your slave again if you can; for you can do nothing with these securities.”

Of course, the master was very angry, and so was the magistrate, who had inadvertently written the recognizance just as it was dictated to him. They charged Friend Hopper with playing a trick upon them, and threatened to prosecute him. He told them he had no fears concerning a prosecution; and if he had played a trick, he thought it was better 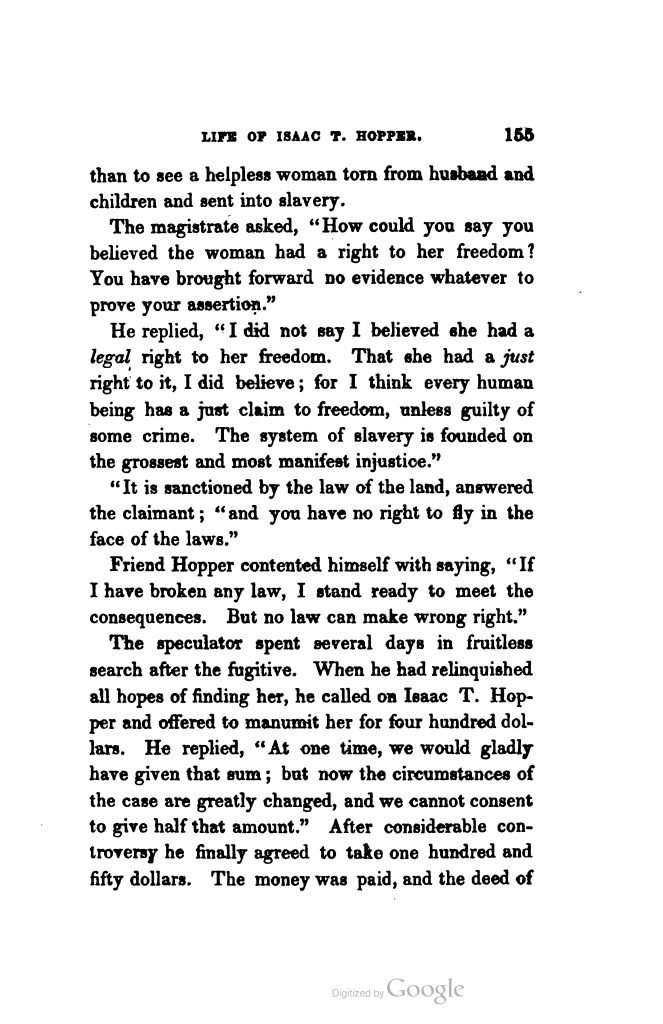 than to see a helpless woman torn from husband and children and sent into slavery.

The magistrate asked, “How could you say you believed the woman had a right to her freedom? You have brought forward no evidence whatever to prove your assertion.”

He replied, “I did not say I believed she had a legal right to her freedom. That she had a just right to it, I did believe; for I think every human being has a just claim to freedom, unless guilty of some crime. The system of slavery is founded on the grossest and most manifest injustice.”

“It is sanctioned by the law of the land,[“] answered the claimant; “and you have no right to fly in the face of the laws.”

Friend Hopper contented himself with saying, “If I have broken any law, I stand ready to meet the consequences. But no law can make wrong right.”

The speculator spent several days in fruitless search after the fugitive. When he had relinquished all hopes of finding her, he called on Isaac T. Hopper and offered to manumit her for four hundred dollars. He replied, “At one time, we would gladly have given that sum; but now the circumstances of the case are greatly changed, and we cannot consent to give half that amount.” After considerable controversy he finally agreed to take one hundred and fifty dollars. The money was paid, and the deed of 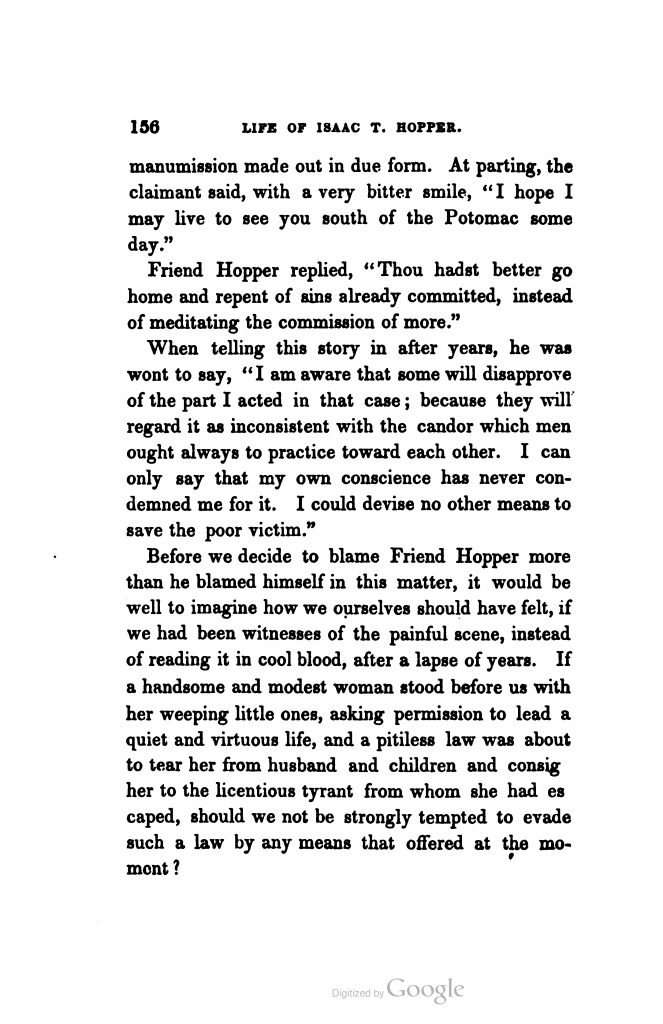 manumission made out in due form. At parting, the claimant said, with a very bitter smile, “I hope I may live to see you south of the Potomac some day.”

Friend Hopper replied, “Thou hadst better go home and repent of sins already committed, instead of meditating the commission of more.”

When telling this story in after years, he was wont to say, “I am aware that some will disapprove of the part I acted in that case; because they will regard it as inconsistent with the candor which men ought always to practice toward each other. I can only say that my own conscience has never condemned me for it. I could devise no other means to save the poor victim.”

Before we decide to blame Friend Hopper more than he blamed himself in this matter, it would be well to imagine how we ourselves should have felt, if we had been witnesses of the painful scene, instead of reading it in cool blood, after a lapse of years. If a handsome and modest woman stood before us with her weeping little ones, asking permission to lead a quiet and virtuous life, and a pitiless law was about to tear her from husband and children and consign[n] her to the licentious tyrant from whom she had escaped, should we not be strongly tempted to evade such a law by any means that offered at the moment? 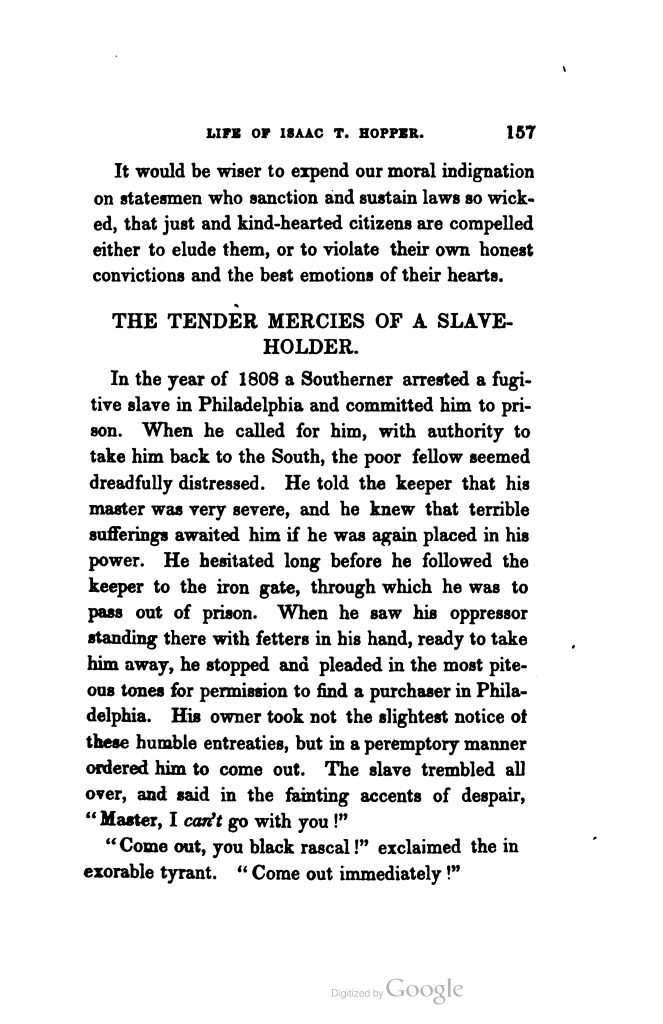 It would be wiser to expend our moral indignation on statesmen who sanction and sustain laws so wicked, that just and kind-hearted citizens are compelled either to elude them, or to violate their own honest convictions and the best emotions of their hearts.