Skip to content
Author: General AssemblyTranscription Source: William Waller Hening, ed., The Statutes at Large; Being a Collection of All the Laws of Virginia from the First Session of the Legislature, in the Year 1619 (New York: R. & W. & G. Bartow, 1823), 1:254–255.
FULL TEXT 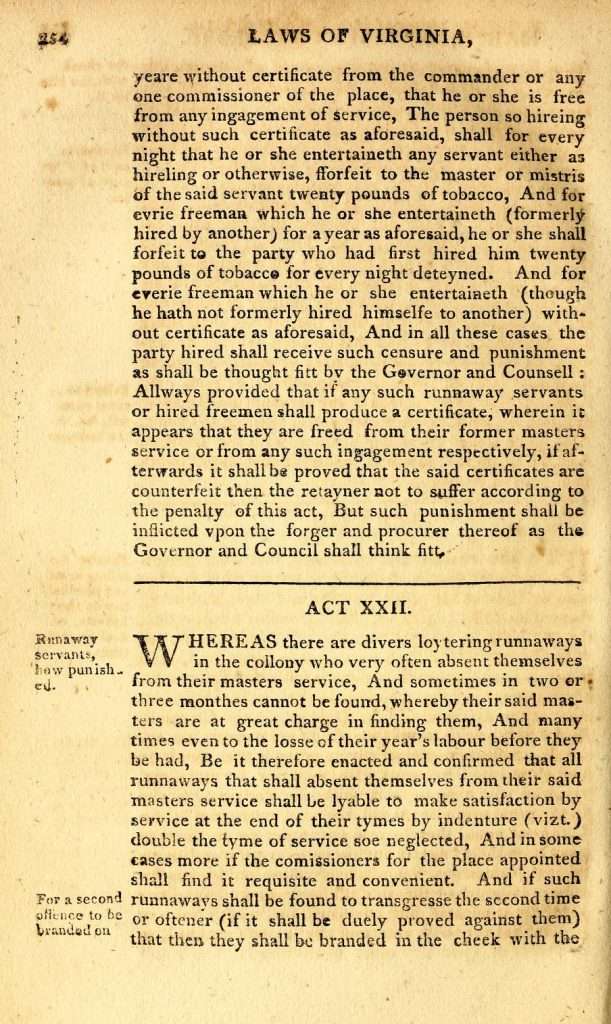 WHEREAS there are divers loytering runnaways in the collony who very often absent themselves from their masters service, And sometimes in two or three monthes cannot be found, whereby their said masters are at great charge in finding them, And many times even to the losse of their year’s labour before they be had, Be it therefore enacted and confirmed that all runaways that shall absent themselves from their said masters service shall be lyable to make satisfaction by service at the end of their tymes by indenture (vizt.) double the tyme of service soe neglected, And in some cases more if the comissioners for the place appointed shall find it requisite and convenient. And if such runnaways shall be found to transgresse the second time or oftener (if it shall be duely proved against them) that then they shall be branded in the cheek with the 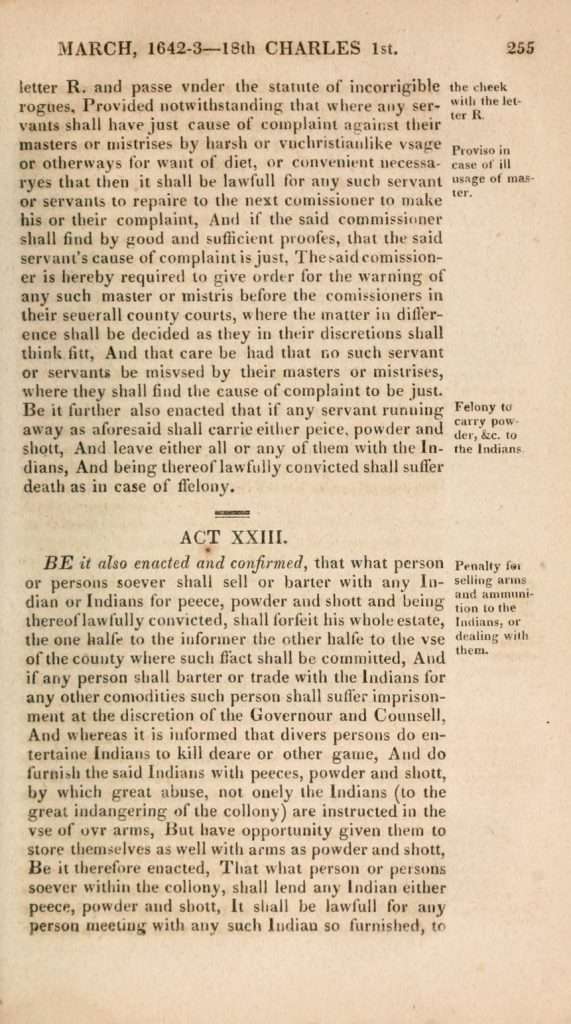 letter R. and passe under the statute of incorrigible rogues, Provided notwithstanding that where any servants shall have just cause of complaint against their masters or mistrises by harsh or unchristianlike usage or otherways for want of diet, or convenient necessaryes that then it shall be lawfull for any such servant or servants to repaire to the next comissioner to make his or their complaint, And if the said commissioner shall find by good and sufficient proofes, that the said servant’s cause of complaint is just, The said comissioner is hereby required to give order for the warning of any such master or mistris before the comissioners in their severall county courts, where the matter in difference shall be decided as they in their discretions shall think fitt, And that care be had that no such servant or servants be misused by their masters or mistrises, where they shall find the cause of complaint to be just. Be it further also enacted that if any servant running away as aforesaid shall carrie either peice, powder and shott, And leave either all or any of them with the Indians, And being thereof lawfully convicted shall suffer death as in case of ffelony.