Skip to content
Author: Harriet Beecher StoweTranscription Source: Uncle Tom’s Cabin; or, Life Among the Lowly with an Introduction Setting Forth the History of the Novel and A Key to Uncle Tom’s Cabin (Boston and New York: Houghton, Mifflin and Company, 1896), 2:301–303.
FULL TEXT 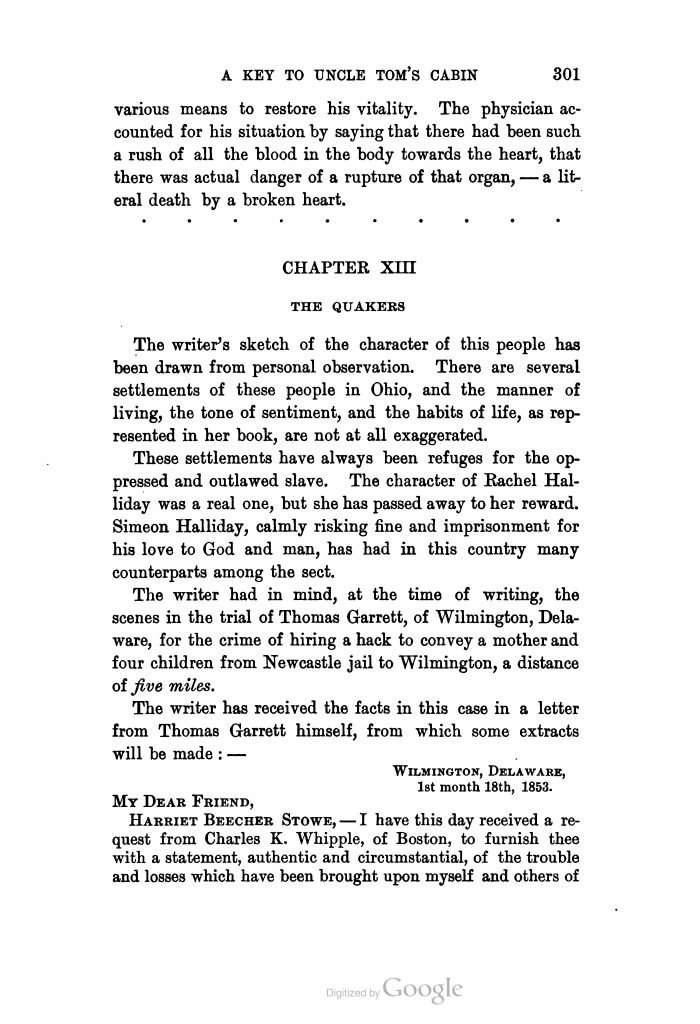 The writer’s sketch of the character of this people has been drawn from personal observation. There are several settlements of these people in Ohio, and the manner of living, the tone of sentiment, and the habits of life, as represented in her book, are not at all exaggerated.

These settlements have always been refuges for the oppressed and outlawed slave. The character of Rachel Halliday was a real one, but she has passed away to her reward. Simeon Halliday, calmly risking fine and imprisonment for his love to God and man, has had in this country many counterparts among the sect.

The writer had in mind, at the time of writing, the scenes in the trial of Thomas Garrett, of Wilmington, Delaware, for the crime of hiring a hack to convey a mother and four children from Newcastle jail to Wilmington, a distance of five miles.

The writer has received the facts in this case in a letter from Thomas Garrett himself, from which some extracts will be made : —

Harriet Beecher Stowe,—I have this day received a request from Charles K. Whipple, of Boston, to furnish thee with a statement, authentic and circumstantial, of the trouble and losses which have been brought upon myself and others of 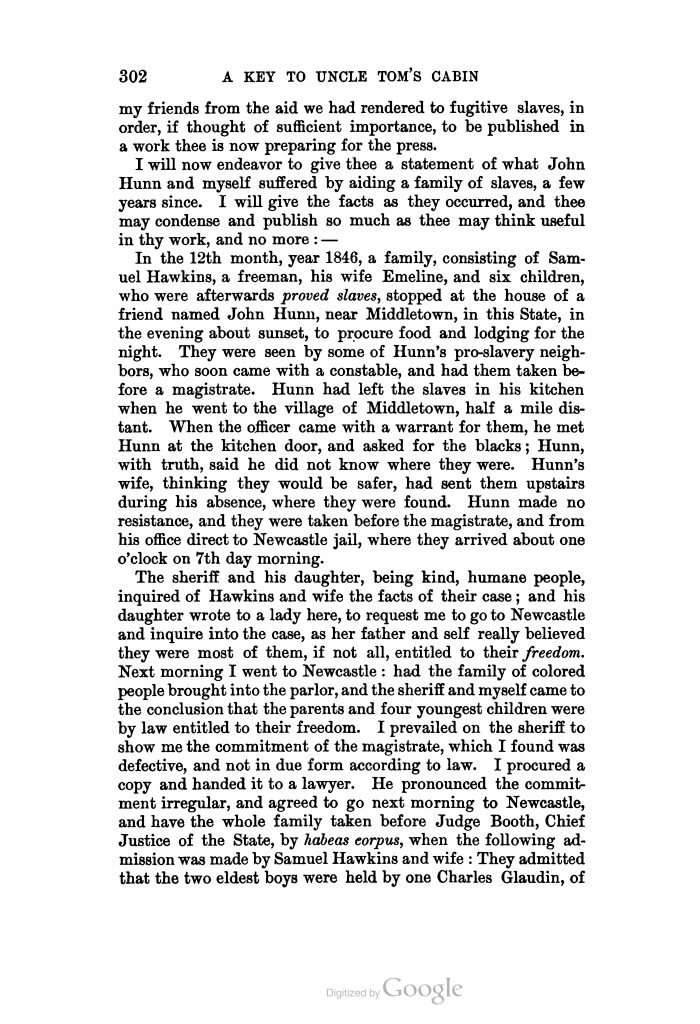 my friends from the aid we had rendered to fugitive slaves, in order, if thought of sufficient importance, to be published in a work thee is now preparing for the press.

I will now endeavor to give thee a statement of what John Hunn and myself suffered by aiding a family of slaves, a few years since. I will give the facts as they occurred, and thee may condense and publish so much as thee may think useful in thy work, and no more : —

In the 12th month, year 1846, a family, consisting of Samuel Hawkins, a freeman, his wife Emeline, and six children, who were afterwards proved slaves, stopped at the house of a friend named John Hunn, near Middletown, in this State, in the evening about sunset, to procure food and lodging for the night. They were seen by some of Hunn’s pro-slavery neighbors, who soon came with a constable, and had them taken before a magistrate. Hunn had left the slaves in his kitchen when he went to the village of Middletown, half a mile distant. When the officer came with a warrant for them, he met Hunn at the kitchen door, and asked for the blacks; Hunn, with truth, said he did not know where they were. Hunn’s wife, thinking they would be safer, had sent them upstairs during his absence, where they were found. Hunn made no resistance, and they were taken before the magistrate, and from his office direct to Newcastle jail, where they arrived about one o’clock on 7th day morning.

The sheriff and his daughter, being kind, humane people, inquired of Hawkins and wife the facts of their case; and his daughter wrote to a lady here, to request me to go to Newcastle and inquire into the case, as her father and self really believed they were most of them, if not all, entitled to their freedom. Next morning I went to Newcastle: had the family of colored people brought into the parlor, and the sheriff and myself came to the conclusion that the parents and four youngest children were by law entitled to their freedom. I prevailed on the sheriff to show me the commitment of the magistrate, which I found was defective, and not in due form according to law. I procured a copy and handed it to a lawyer. He pronounced the commitment irregular, and agreed to go next morning to Newcastle, and have the whole family taken before Judge [James] Booth [Jr.], Chief Justice of the State, by habeas corpus, when the following admission was made by Samuel Hawkins and wife : They admitted that the two eldest boys were held by one Charles Glaudin, of 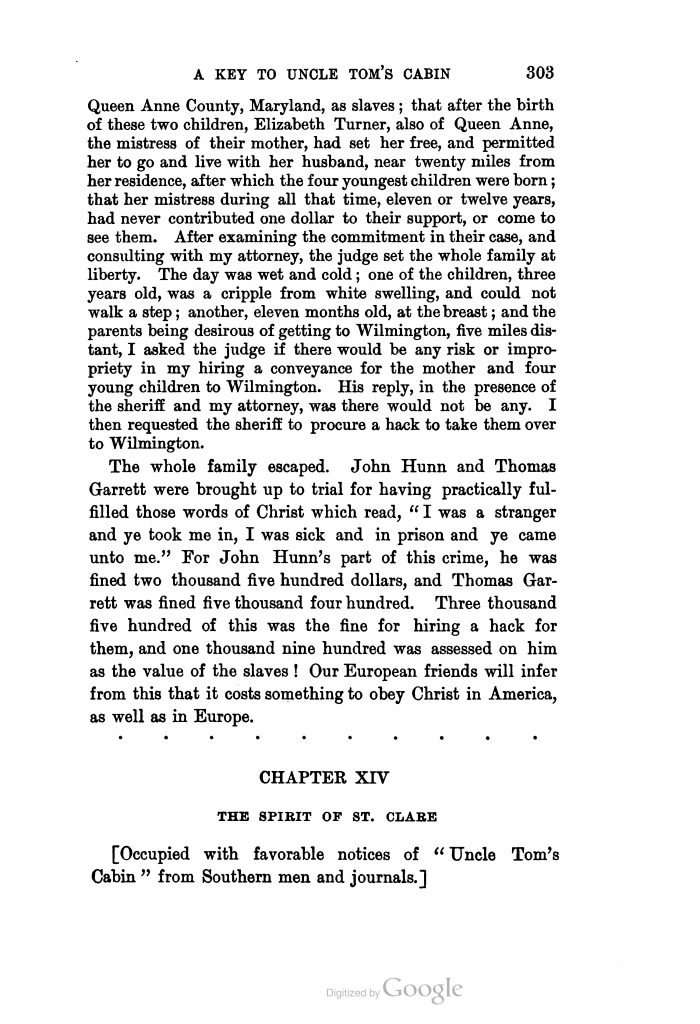 Queen Anne County, Maryland, as slaves; that after the birth of these two children, Elizabeth Turner, also of Queen Anne, the mistress of their mother, had set her free, and permitted her to go and live with her husband, near twenty miles from her residence, after which the four youngest children were born; that her mistress during all that time, eleven or twelve years, had never contributed one dollar to their support, or come to see them. After examining the commitment in their case, and consulting with my attorney, the judge set the whole family at liberty. The day was wet and cold; one of the children, three years old, was a cripple from white swelling, and could not walk a step; another, eleven months old, at the breast; and the parents being desirous of getting to Wilmington, five miles distant, I asked the judge if there would be any risk or impropriety in my hiring a conveyance for the mother and four young children to Wilmington. His reply, in the presence of the sheriff and my attorney, was there would not be any. I then requested the sheriff to procure a hack to take them over to Wilmington.

The whole family escaped. John Hunn and Thomas Garrett were brought up to trial for having practically fulfilled those words of Christ which read, “I was a stranger and ye took me in, I was sick and in prison and ye came unto me.” For John Hunn’s part of this crime, he was fined two thousand five hundred dollars, and Thomas Garrett was fined five thousand four hundred. Three thousand five hundred of this was the fine for hiring a hack for them, and one thousand nine hundred was assessed on him as the value of the slaves! Our European friends will infer from this that it costs something to obey Christ in America, as well as in Europe.