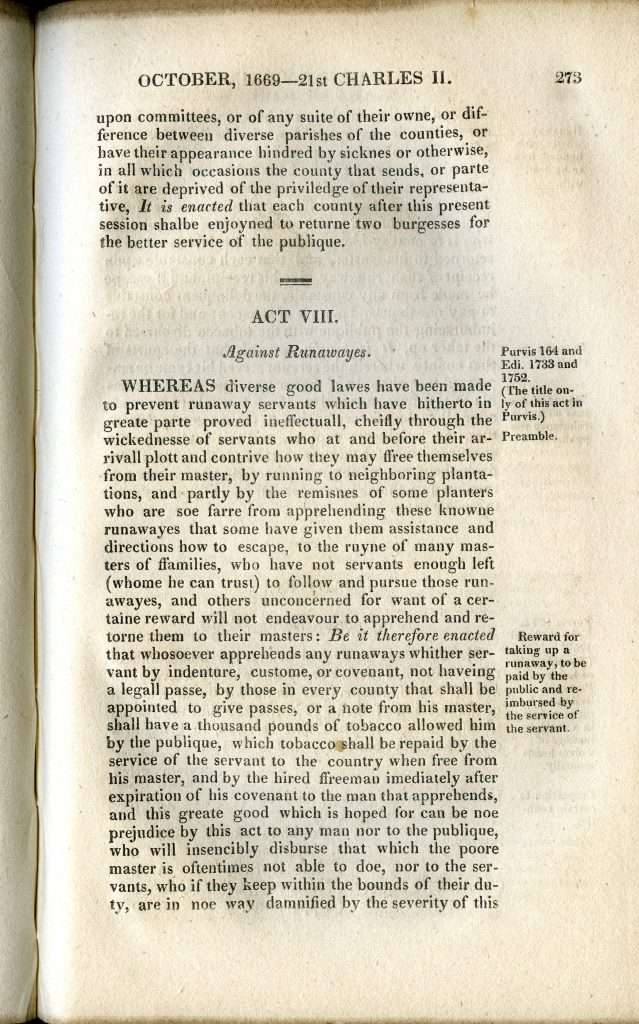 WHEREAS diverse good lawes have been made to prevent runaway servants which have hitherto in greate parte proved ineffectuall, cheifly through the wickednesse of servants who at and before their arrivall plott and contrive how they may ffree themselves from their master, by running to neighboring plantations, and partly by the remisnes of some planters who are soe farre from apprehending these knowne runawayes that some have given them assistance and directions how to escape, to the ruyne of many masters of ffamilies, who have not servants enough left (whome he can trust) to follow and pursue those runawayes, and others unconcerned for want of a certaine reward will not endeavour to apprehend and retorne them to their masters: Be it therefore enacted that whosoever apprehends any runaways whither servant by indenture, custome, or covenant, not haveing a legall passe, by those in every county that shall be appointed to give passes, or a note from his master, shall have a thousand pounds of tobacco allowed him by the publique, which tobacco shall be repaid by the service of the servant to the country when free from his master, and by the hired ffreeman imediately after expiration of his covenant to the man that apprehends, and this greate good which is hoped for can be noe prejudice by this act to any man nor to the publique, who will insencibly disburse that which the poore master is oftentimes not able to doe, nor to the servants, who if they keep within the bounds of their duty, are in noe way damnified by the severity of this 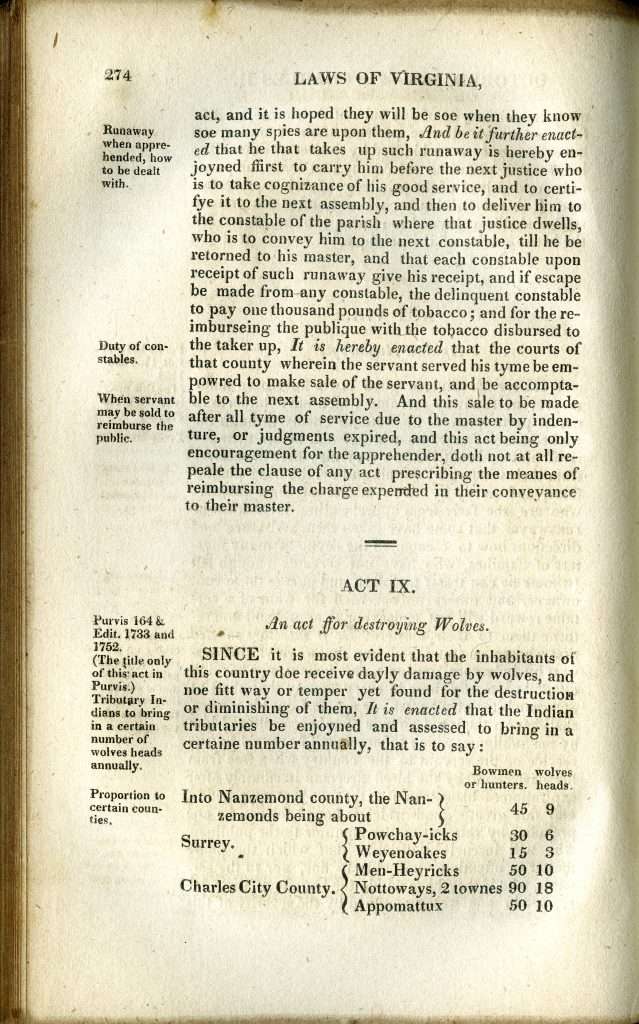 act, and it is hoped they will be soe when they know soe many spies are upon them, And be it further enacted that he that takes up such runaway is hereby enjoyned ffirst to carry him before the next justice who is to take cognizance of his good service, and to certifye it to the next assembly, and then to deliver him to the constable of the parish where that justice dwells, who is to convey him to the next constable, till he be returned to his master, and that each constable upon receipt of such runaway give his receipt, and if escape be made from any constable, the delinquent constable to pay one thousand pounds of tobacco; and for the reimburseing the publique with the tobacco disbursed to the taker up, It is hereby enacted that the courts of that county wherein the servant served his tyme be empowred to make sale of the servant, and be accomptable to the next assembly. And this sale to be made after all tyme of service due to the master by indenture, or judgments expired, and this act being only encouragement for the apprehender, doth not at all repeale the clause of any act prescribing the meanes of reimbursing the charge expended in their conveyance to their master.