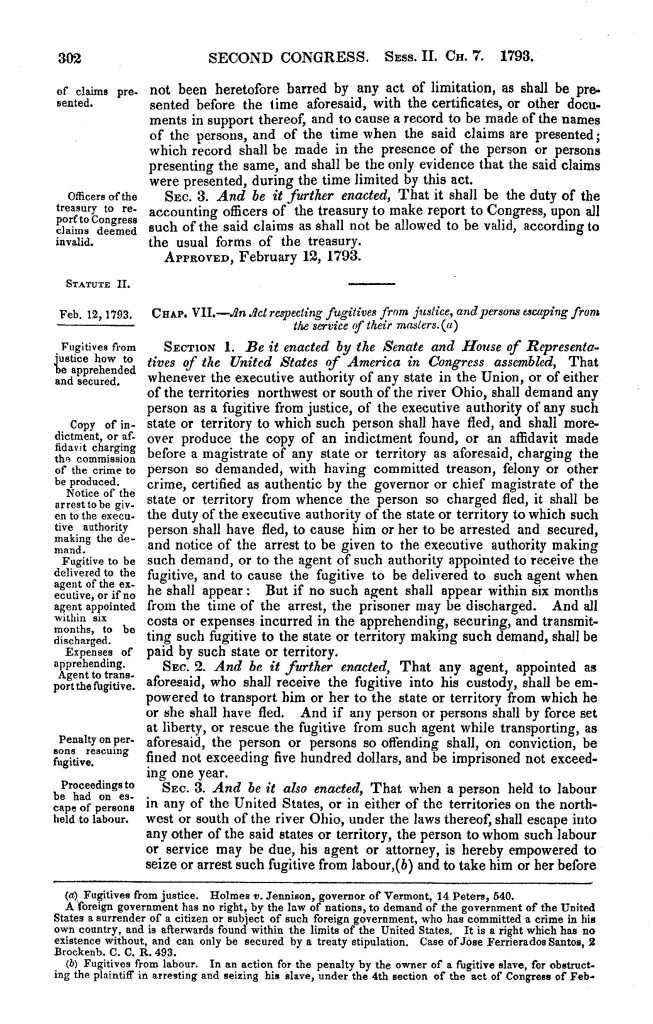 Sec. 2. And be it further enacted, That any agent, appointed as aforesaid, who shall receive the fugitive into his custody, shall be empowered to transport him or her to the state or territory from which he or she shall have fled. And if any person or persons shall by force set at liberty, or rescue the fugitive from such agent while transporting, as aforesaid, the person or persons so offending shall, on conviction, be fined not exceeding five hundred dollars, and be imprisoned not exceeding one year.

Sec. 3. And be it also enacted, That when a person held to labour in any of the United States, or in either of the territories on the northwest or south of the river Ohio, under the laws thereof, shall escape into any other of the said states or territory, the person to whom such labour or service may be due, his agent or attorney, is hereby empowered to seize or arrest such fugitives from labour, and to take him or her before 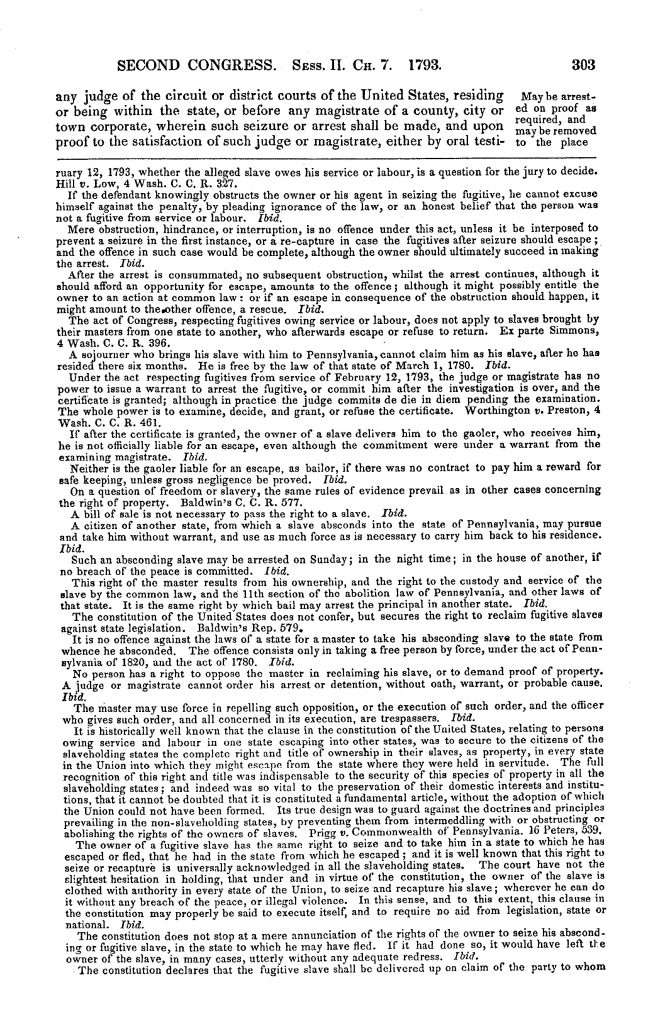 any judge of the circuit or district courts of the United States, residing or being within the state, or before any magistrate of a county, city or town corporate, wherein such seizure or arrest shall be made, and upon proof to the satisfaction of such judge or magistrate, either by oral testi- 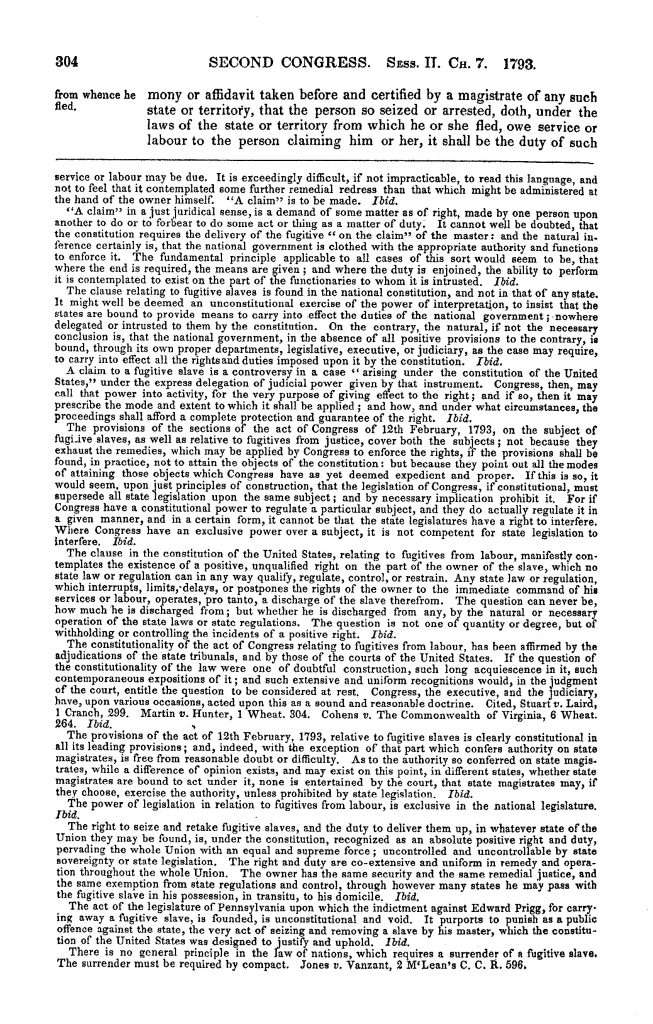 mony or affidavit taken before and certified by a magistrate of any such state or territory, that the person so seized or arrested, doth, under the laws of the state or territory from which he or she fled, owe service or labour to the person claiming him or her, it shall be the duty of such 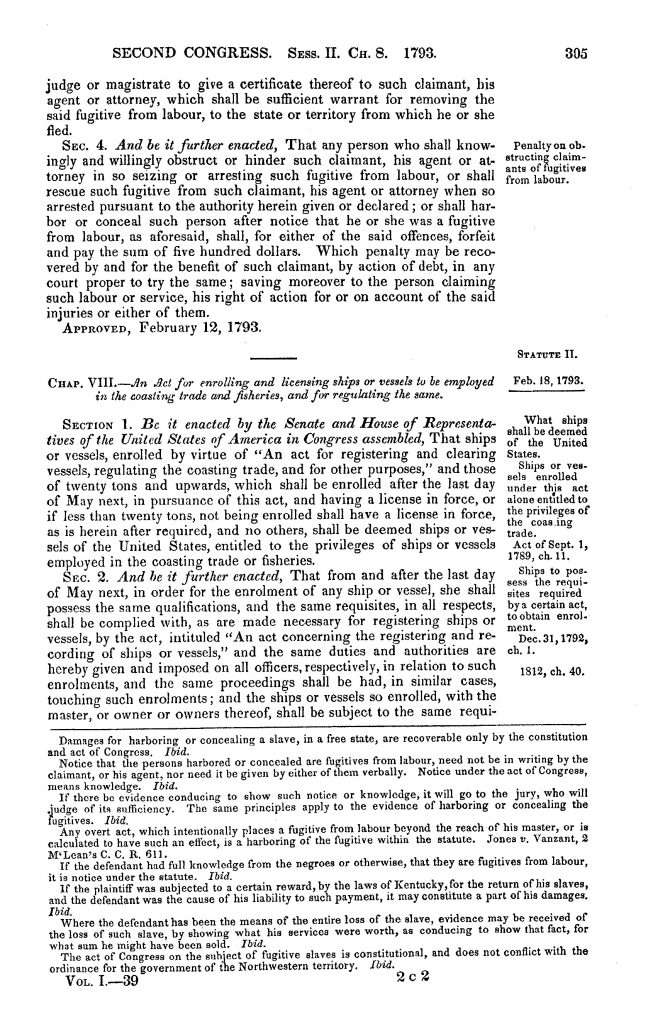 judge or magistrate to give a certificate thereof to such claimant, his agent or attorney, which shall be sufficient warrant for removing the said fugitive from labour, to the state or territory from which he or she fled.

Sec. 4. And be it further enacted, That any person who shall knowingly and willingly obstruct or hinder such claimant, his agent or attorney in so seizing or arresting such fugitive from labour, or shall rescue such fugitive from such claimant, his agent or attorney when so arrested pursuant to the authority herein given or declared; or shall harbor or conceal such person after notice that he or she was a fugitive from labour, as aforesaid, shall, for either of the said offences, forfeit and pay the sum of five hundred dollars. Which penalty may be recovered by and for the benefit of such claimant, by action of debt, in any court proper to try the same; saving moreover to the person claiming such labour or service, his right of action for or on account of the said injuries or either of them.

Commonwealth versus Camillus Griffith (1823) “An Act to amend, and supplementary to, the Act entitled ‘An Act respecting Fugitives from Justice, and Persons escaping from the Service of their Masters,’ approved February twelfth, one thousand seven hundred and ninety-three” (1850) Decision in the Trial of Anthony Burns (1854)