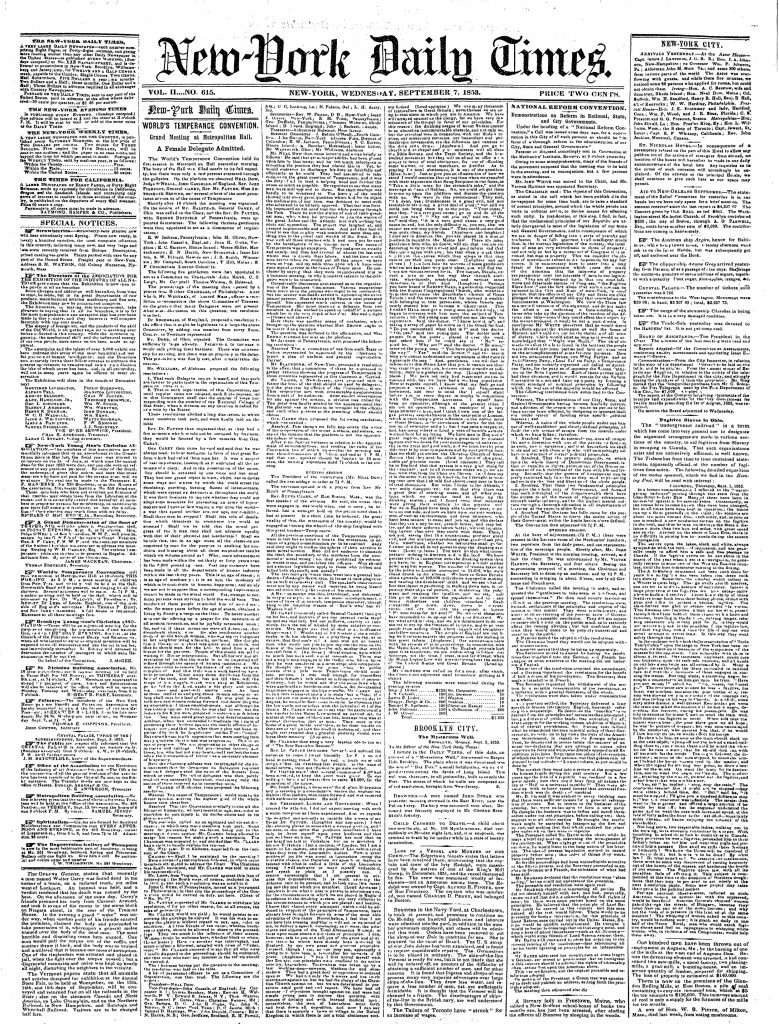 The “underground railroad” is a term which has come into very general use to designate the organized arrangements made in various sections of the country, to aid fugitives from Slavery in escaping to Canada. That such organizations exist and are extensively efficient, is well known. The Tribune has from time to time contained statements, apparently official, of the number of fugitives thus aided. The following detailed exposition of the modus operandi, which we find in the Evening Post, will be read with interest:

In a former communication I referred to the “underground railroad” passing through this state from the Ohio River to Lake Erie. Many of these have been in successful operation for several years. Occasionally, as the routes have become known they have been changed, but at all times have been kept in operation; the trains run upon them generally in the night; the stations are about ten miles distant from each other, and, as soon as one is reached a new conductor carries on the fugitive to the next, and thus he is taken through the State a distance of more than two hundred miles, with great speed and safety. Arrived on the shore of Lake Erie, there is no difficulty in passing him to Canada during the season of navigation.

The sailors upon the lakes, black and white, always sympathize with the victim of oppression, and are generally ready to afford him a safe and free passage to Canada. If the fugitive arrives on the lakeshore in the season of the year when there is no navigation, he generally remains on some one of the Western Reserve counties, until the boat commences running in the Spring.

The Anti-Slavery sentiment has been such there for years that no fugitive has been taken from there back into slavery. Sometimes the number which collect in a Winter is quite large. They generally arm themselves, and are sworn to die in defence of each other. Indeed a large proportion of the fugitives [garbled] escape carry a bowie knife and revolve. I once knew thirty of these fugitives come forth from their hiding places, armed with guns and rifles to protect a brother fugitive. The slave hunter was glad to escape without his victim. This Summer two fugitives, a man and his wife, passed through this state both of them armed with a knife and revolver, traveling in the daytime, defying danger, refusing assistance only as they paid for it, as they would not invoice any one in the penalties of the fugitive law, and deciding they would [take?] the life of any one who should attempt to arrest them. In this way they went safely through the State.

In the applause with which the representation of “Uncle Tom’s Cabin” upon the state in New York has been received, we have an illustration of the sympathies of the masses for the oppressed. This sympathy with them is almost universal. Our teamsters, engineers, conductors and brakemen upon our railroads, captains, and all hands on our lake steamboats are all actuated by it. Many a fugitive passes through the State concealed in railroad cars and with the connivance of those engaged in running the trains. Not long since, a trembling negro besought a conductor to let him get upon the train. “Have you any money?” asked he. “No, massa, but I must go.” The conductor saw at once he was a fugitive, his heart was touched, and soon the poor victim of oppression was stowed away in one corner of the baggage car, and was rolling on his way to Canada. At a dépot, some sixty miles distant, a well dressed Kentuckian got upon the train and asked the conductor if he had a negro, describing the fugitive, among his passengers. He was told the examine for himself, and on went the train with both master and fugitive on board. When told that the master was on board, the poor slave gave up all hope; he was the picture of despair; but was soon encouraged by the conductor, who assured him that, if he would follow his directions, he would effect his escape.

He then told him, as soon as the train should slack up at the next depot, to jump off and run behind a small building close by, and remain there until he heard the whistle for the cars to start; that he should then run with all his [garbled] for the woods. The negro followed the directions; as soon as the cars stopped, he concealed himself behind the house unperceived by the master; and when the signal for starting was given, he drew a beeline for the woods. On went the train for its destination, and on went the negro for Canada. The conductor, standing by the master, pointed at the fugitive, and asked him if that was not his slave.

“Yes, sir,” he replied; “stop, stop the train.” The conductor assured him it could not be stopped—they were already behind time, &c. “But,” said he, “it must be stopped; I’ll give you a hundred dollars to stop it;” but the conductor was inflexible. The master then went to the engineer and offered a large amount if he would let him off; but the engineer understood the game and on went the cars with increased speed, at the rate of forty miles the hour to the next depot, some thirty miles distant, all hands enjoying the torment of the slaveholder.

Not long since, two respectable ladies, walking out in the evening, were suddenly confronted by a negro. With trembling he asked them how he could cross to Canada. They perceived he was a fugitive, persuaded him to their father’s house and fed him and went that night and procured him a passage. How shall we stifle these feelings of humanity? We know the Union will be dissolved if we [garbled] do it; but how is it to be done? By what law? By what penalties? To preserve our institutions, there must be some way discovered of rooting humanity out of the hearts of the masses and hardening the hearts of our women. The Fugitive Slave law, with all is penalties, fails of enforcing it. The subject is commended at this time to the attention of Northern doughfaces, that they may be prepared to act wisely at the next dissolution panic. Some new project may raise their price in the political market.

Perhaps personal chastisement, inflict on such American women as sympathies with the oppressed, would be beneficial. Austrian Generals whipped women naked through the streets of Hungary, because they loved freedom and [garbled] the downtrodden; and why not the tools of oppressors in this land adopt the same measure? The whipping of women naked in this country, would be nothing new; it is practiced daily in one half of the Union. Surely, men who would catch fugitive slaves need feel no repugnance to whipping white women who, in violation of the Compromise [of 1850, which included the Fugitive Slave Act], would help them away.