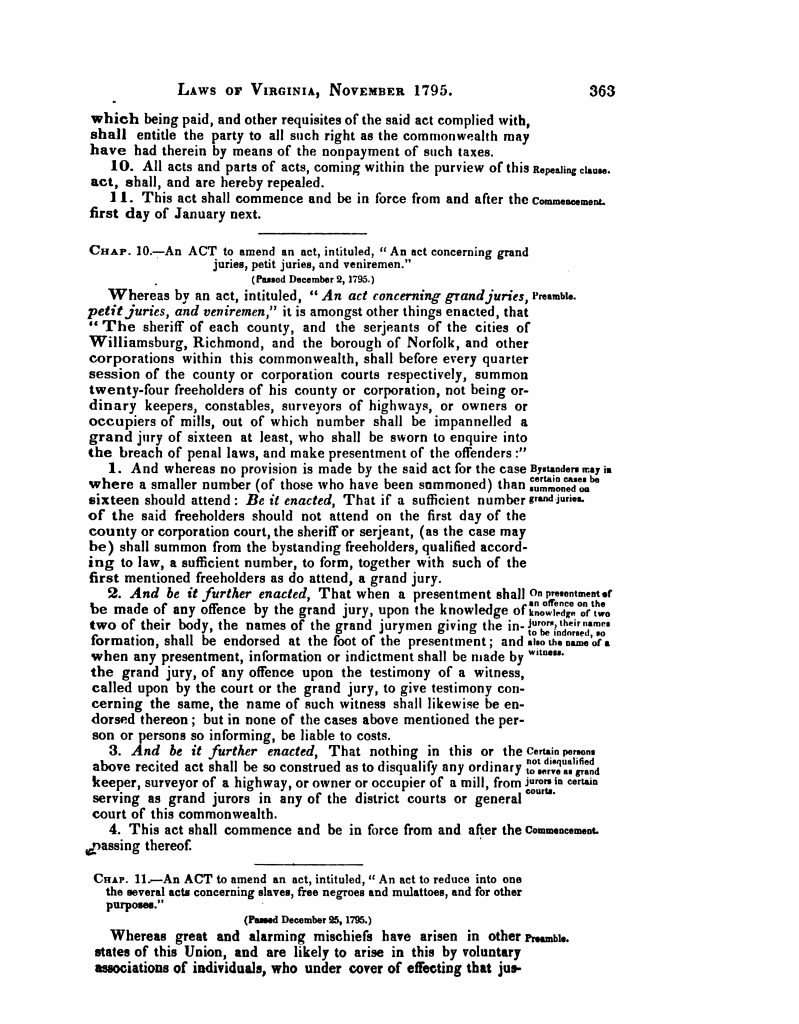 Chap. 10.—An ACT to amend an act, intituled, “An act to reduce into one the several acts concerning slaves, free negroes and mulattoes, and for other purposes”

Whereas great and alarming mischiefs have arisen in other states of the Union, and are likely to arise in this by voluntary associations of individuals, who under cover of effecting that jus- 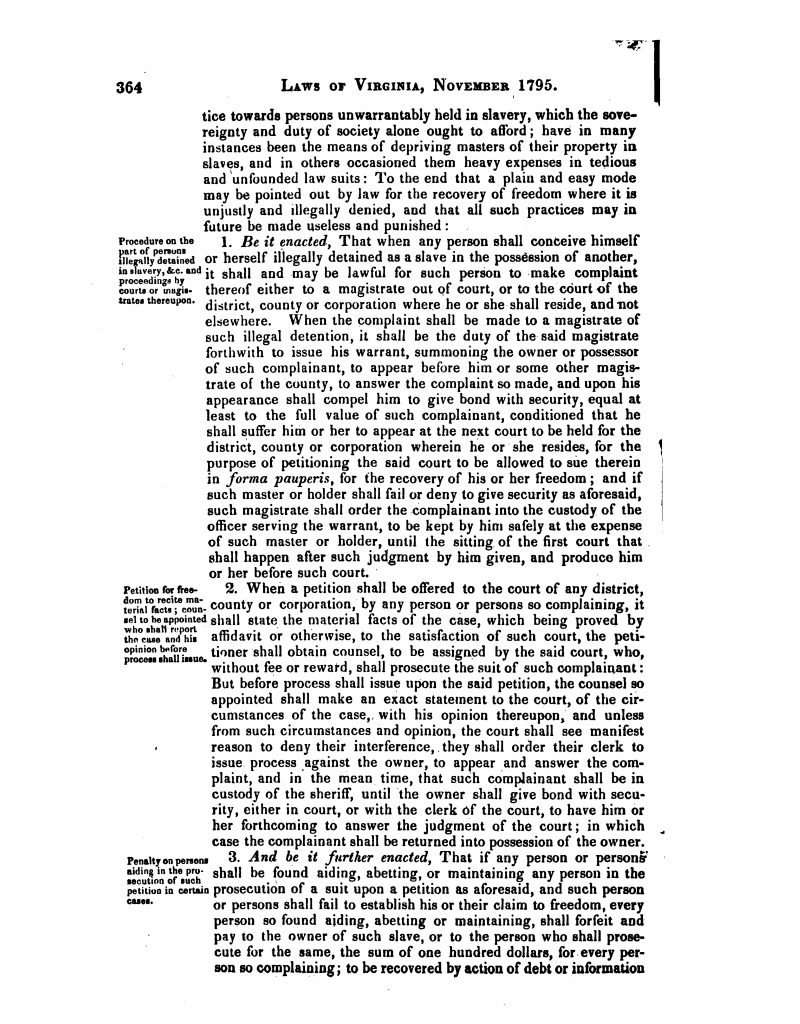 tice towards persons unwarrantably held in slavery, which the sovereignty and duty of society alone ought to afford; have in many instances been the means of depriving masters of their property in slaves, and in others occasioned them heavy expenses in tedious and unfounded law suits: To the end that a plan and easy mode may be pointed out by law for the recovery of freedom where it is unjustly and illegally denied, and that all such practices may in future be made useless and punished:

1. Be it enacted, That when any person shall conceive himself or herself illegally detained as a slave in the possession of another, it shall and may be lawful for such person to make complaint thereof either to a magistrate out of court, or to the court of the district, county or corporation where he or she shall reside, and not elsewhere. When the complaint shall be made to a magistrate of such illegal detention, it shall be the duty of the said magistrate forthwith to issue his warrant, summoning the owner or possessor of such complainant, to appear before him or some other magistrate of the county, to answer the complaint so made, and upon his appearance shall compel him to give bond with security, equal at least to the full value of such complainant, conditioned that he shall suffer him or her to appear at the next court to be held for the district, county or corporation wherein he or she resides, for the purpose of petitioning the said court to be allowed to sue therein in forma pauperis, for the recovery of his or her freedom; and if such master or holder shall fail or deny to give security as aforesaid, such magistrate shall order the complainant into the custody of the officer serving the warrant, to be kept by him safely at the expense of such master or holder, until the sitting of the first court that shall happen after such judgment by him given, and produce him or her before such court.

2. When a petition shall be offered to the court of any district, county or corporation, by any person or persons so complaining, it shall state the material facts of the case, which being proved by affidavit or otherwise, to the satisfaction of such court, the petitioner shall obtain counsel, to be assigned by the said court, who, without fee or reward, shall prosecute the suit of such complainant: But before process shall issue upon the said petition, the counsel so appointed shall make an exact statement to the court, of the circumstances of the case, with his opinion thereupon, and unless from such circumstances and opinion, the court shall see manifest reason to deny their interference, they shall order their clerk to issue process against the owner, to appear and answer the complaint, and in the mean time, that such complainant shall be in custody of the sheriff, until the owner shall give bond with security, either in court, or with the clerk of the court, to have him or her forthcoming to answer the judgment of the court; in which case the complainant shall be returned into possession of the owner.

3. And be it further enacted, That if any person or persons shall be found aiding, abetting, or maintaining any person in the prosecution of a suit upon a petition as aforesaid, and such person or persons shall fail to establish his or her claim to freedom, every person so found aiding, abetting or maintaining, shall forfeit and pay to the owner of such slave, or to the person who shall prosecute for the same, the sum of one hundred dollars, for every person so complaining; to be recovered by action of debt or information 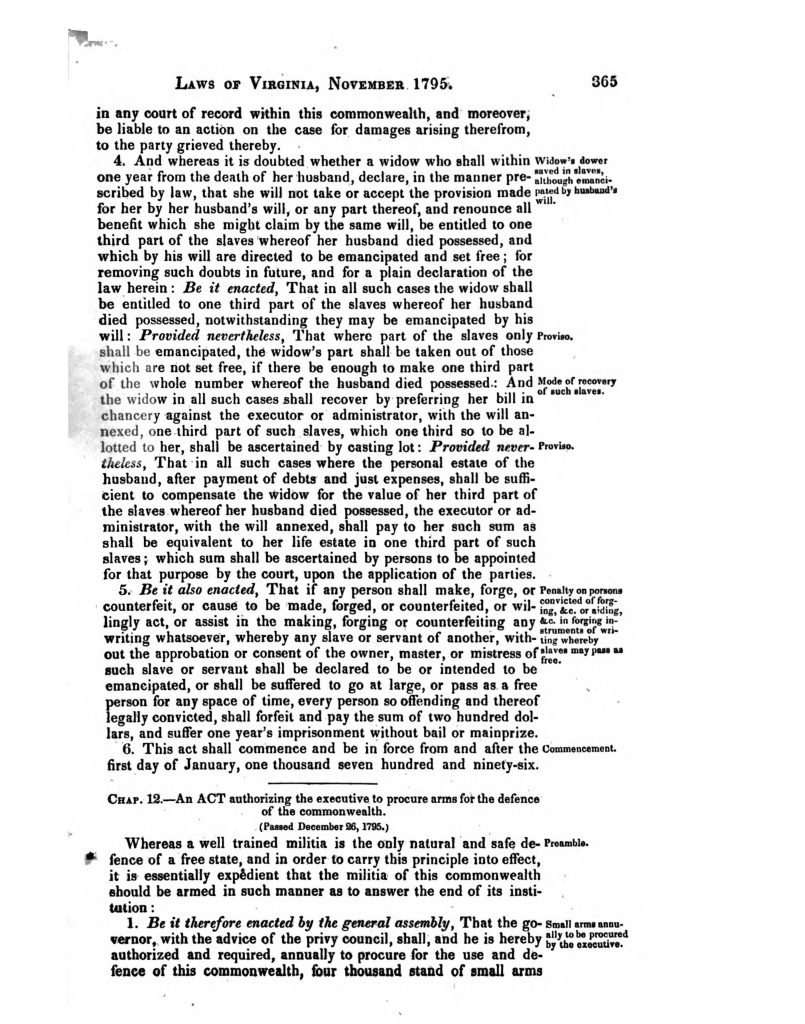 in any court of record within this commonwealth, and moreover, be liable to an action on the case for damages arising therefrom, to the part grieved hereby.

5. Be it also enacted, That if any person shall make, forge, or counterfeit, or cause to be made, forged, or counterfeited, or willingly act, or assist in the making, forging or counterfeiting any writing whatsoever, whereby any slave or servant of another, without the approbation or consent of the owner, master, or mistress of such slave or servant shall be declared to be or intended to be emancipated, or shall be suffered to go at large, or pass as a free person for any space of time, every person so offending and thereof legally convicted, shall forfeit and pay the sum of two hundred dollars, and suffer one year’s imprisonment without bail or mainprize.

6. This act shall commence and be in force from and after the first day of January, one thousand seven hundred and ninety-six.