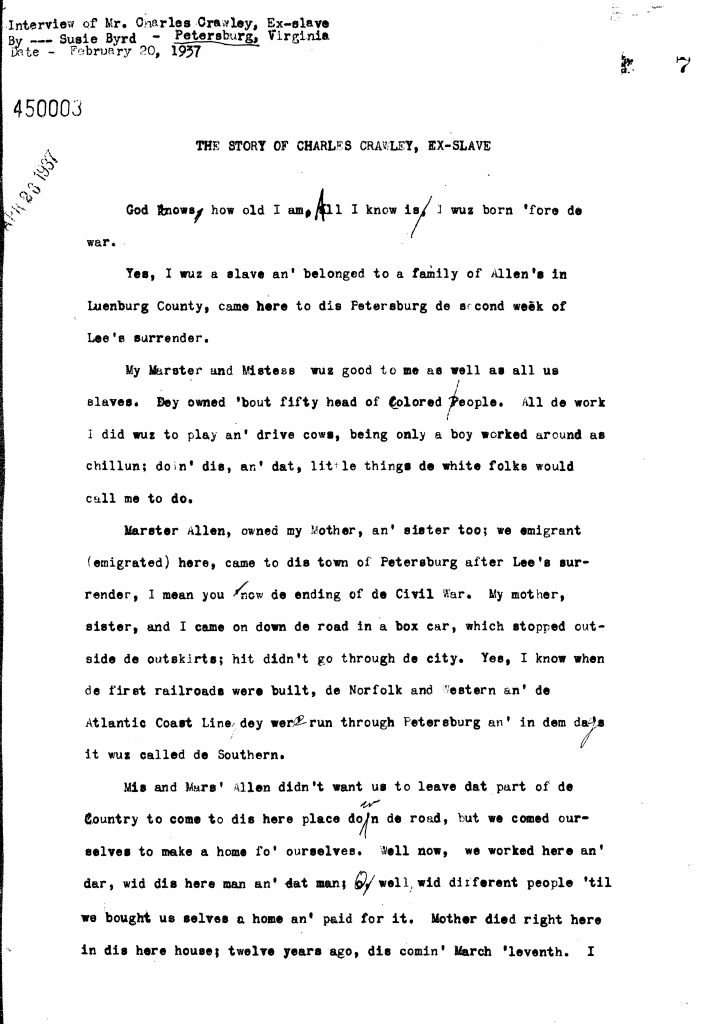 THE STORY OF CHARLES CRAWLEY, EX-SLAVE

God knows how old I am. All I know is I wuz born ‘fore de war.

Yes, I wuz a slave an’ belonged to a family of Allen’s in Luenburg County, came here to dis Petersburg de second week of Lee’s surrender.

My Marster and Mistess wuz good to me as well as all us slaves. Dey owned ’bout fifty head of Colored people. All de work I did wuz to play an’ drive cows, being only a boy worked around as chillun; doin’ dis, an’ dat, little things de white folks would call me to do.

Marster Allen, owned my Mother, an’ sister too; we emigrant (emigrated) here, came to dis town of Petersburg after Lee’s surrender, I mean you now de ending of de Civil War. My mother, sister, and I came on down de road in a box car, which stopped outside de outskirts; hit didn’t go through de city. Yes, I know when de first railroads were built, de Norfolk and Western an’ de Atlantic Coast Line dey wer run through Petersburg an’ in dem days it wuz called de Southern.

Mis and Mars’ Allen didn’t wan us to leave dat part of de Country to come to dis here place down de road, but we comed ourselves to make a home fo’ ourselves. Well now, we worked here an’ dar, wid dis here man an’ dat man; O well, wid different people ’til we bought us selves a home an’ paid for it. Mother died right here in dis here house; twelve years ago, dis comin’ March ‘leventh. I 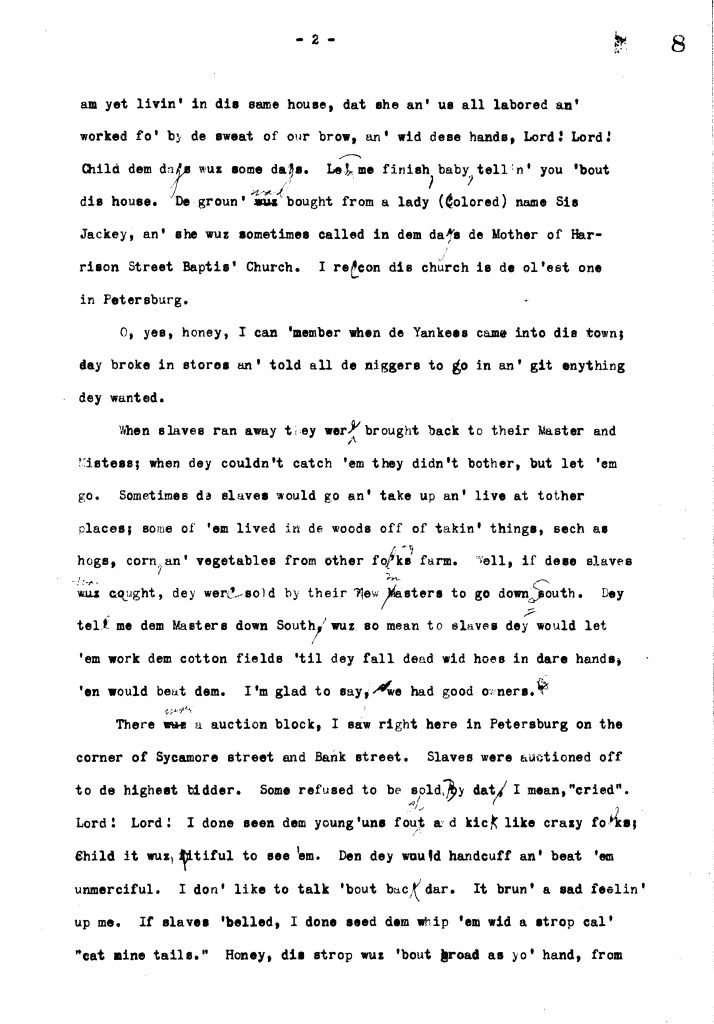 am yet livin’ in dis same house, dat she an’ us all labored an’ worked fo’ by de sweat of our brow, an’ wid dese hands, Lord! Lord! Child dem days wuz some days. Le’me finish, baby, tellin’ you ’bout dis house. De groun’ was bought from a lady (Colored) name Sis Jackey, an’ she wuz sometimes called in dem days de Mother of Harrison Street Baptis’ Church. I reccon dis church is de ol’est one in Petersburg.

O, yes, honey, I can ‘member when de Yankees came into dis town; day broke in stores an’ told all de niggers to go in an’ git anything dey wanted.

When slaves ran away they were brought back to their Master and Mistess; when dey couldn’t catch ’em they didn’t bother, but let ’em go. Sometimes de slaves would go an’ take up an’ live at tother places; some of ’em lived in de woods off of takin’ things, sech as hogs, corn, an’ vegetables from other folks farm. Well, if dese slaves was caught, dey were sold by their new masters to go down South. Dey tell me dem Masters down South wuz so mean to slaves dey would let ’em work dem cotton fields ’til dey fall dead wid hoes in dare hands, ‘en would beat dem. I’m glad to say, we had good owners.

There was a auction block, I saw right here in Petersburg on the corner of Sycamore street and Bank street. Slaves were auctioned off to de highest bidder. Some refused to be sold. By dat I mean, “cried”. Lord! Lord! I done seen dem young’uns fought and kick like crazy folks; Child it wuz pitiful to see ’em. Den dey would handcuff an’ beat ’em unmerciful. I don’ like to talk ’bout back dar. It brun’ a sad feelin’ up me. If slaves ‘belled, I done seed dem whip ’em wid a strop cal’ “cat nine tails.” Honey, dis strop wuz ’bout broad as yo’ hand, from 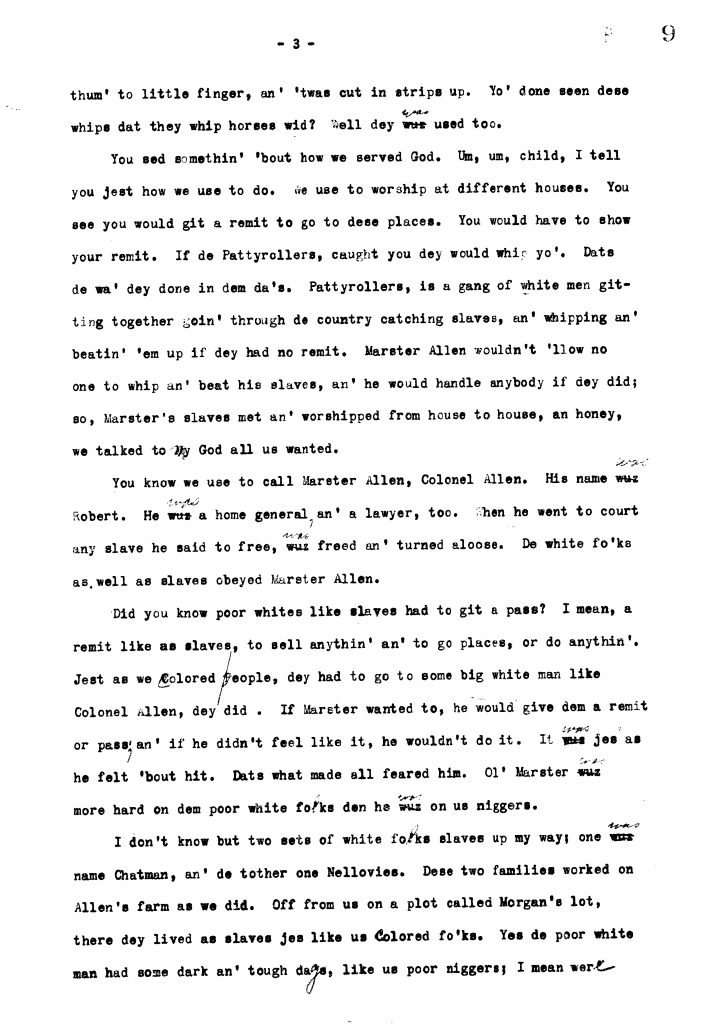 thum’ to little finger, an’ ’twas cut in strips up. Yo’ done seen dese whips dat they whip horses wid? Well dey was used too.

You sed somethin’ ’bout how we served God. Um, um, child, I tell you jest how we use to do. We use to worship at different houses. You see you would git a remit to go to dese places. You would have to show your remit. If de Pattyrollers, caught you dey would whip yo’. Dats de wa’ dey done in dem da’s. Pattyrollers, is a gang of white men gitting together goin’ through de country catching slaves, an’ whipping an’ beatin’ ’em up if dey had no remit. Marster Allen wouldn’t ‘llow no one to whip an’ beat his slaves, an’ he would handle anybody if dey did; so, Marster’s slaves met an’ worshipped from house to house, an honey, we talked to God all us wanted.

You know we use to call Marster Allen, Colonel Allen. His name was Robert. He was a home general, an’ a lawyer, too. When he went to court any slave he said to free, was freed an’ turned aloose. De white fo’ks as well as slaves obeyed Marster Allen.

Did you know poor whites like slaves had to git a pass? I mean, a remit like us slaves, to sell anythin’ an’ to go places, or do anythin’. Jest as we Colored people, dey had to go to some big white man like Colonel Allen, dey did. If Marster wanted to, he would give dem a remit or pass, an’ if he didn’t feel like it, he wouldn’t do it. It was jes as he felt ’bout hit. Dats what made all feared him. Ol’ Marster was more hard on dem poor white folks den he was on us niggers.

I don’t know but two sets of white folks slaves up my way; one was name Chatman, an’ de tother one Nellovies. Dese two families worked on Allen’s farm as we did. Off from us on a plot called Morgan’s lot, there dey lived as slaves jes like us Colored fo’ks. Yes de poor white man had some dark an’ tough days, like us poor niggers; I mean were 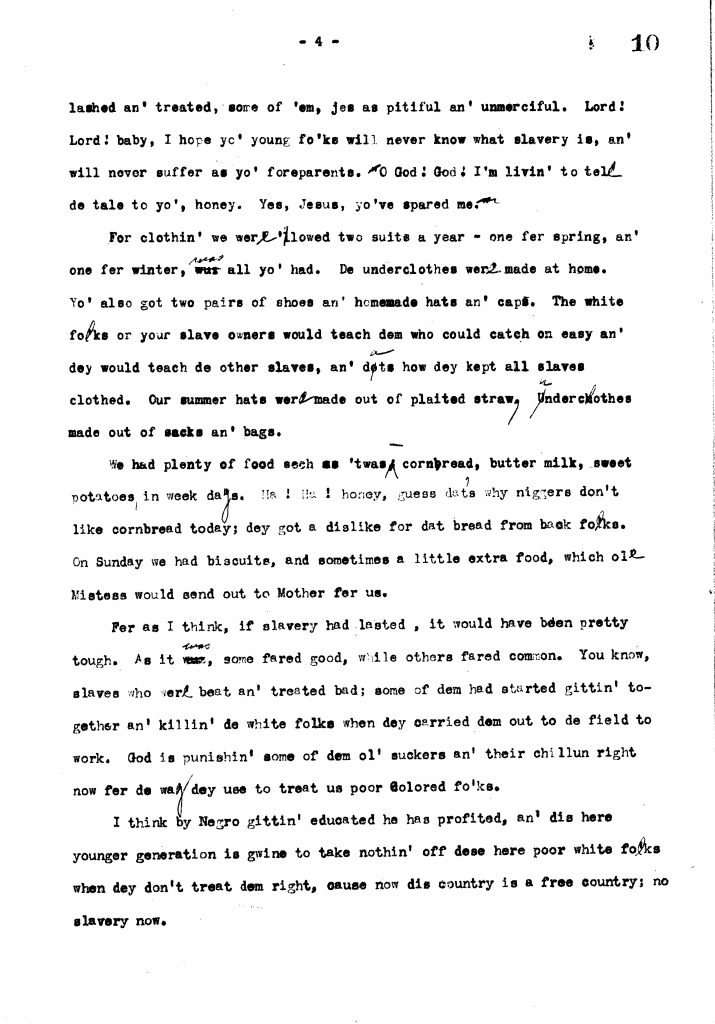 lashed an’ treated, some of ’em, jes as pitiful an’ unmerciful. Lord! Lord! baby, I hope yo’ young fo’ks will never know what slavery is, an’ will never suffer as yo’ foreparents. O God! God! I’m livin’ to tell de tale to yo’, honey. Yes, Jesus, yo’ve spared me.

For clothin’ we were ‘lowed two suits a year—one fer spring, an’ one fer winter, was all yo’ had. De underclothes were made at home. Yo’ also got two pairs of shoes an’ homemade hats an’ caps. The white folks or your slave owners would teach dem who could catch on easy an’ dey would teach de other slaves, an’ dats how dey kept all slaves clothed. Our summer hats were made out of plaited straw, underclothes made out of sacks an’ bags.

We had plenty of food each as ’twas cornbread, butter milk, sweet potatoes, in week days. Ha! Ha! honey, guess dat’s why niggers don’t like cornbread today; dey got a dislike for dat bread from back folks. On Sunday we had biscuits, and sometimes a little extra food, which ole Mistess would send out to Mother for us.

Fer as I think, if slavery had lasted, it would have been pretty tough. As it was, some fared good, while others fared common. You know, slaves who were beat an’ treated bad; some of dem had started gittin’ together an’ killin’ de white folks when dey carried dem out to de field to work. God is punishin’ some of dem ol’ suckers an’ their chillun right now fer de way dey use to treat us poor Colored folks.

I think by Negro gittin’ educated he has profited, an’ dis here younger generation is gwine to take nothin’ off dese here poor white folks when dey don’t treat dem right, cause now dis country is a free country; no slavery now.