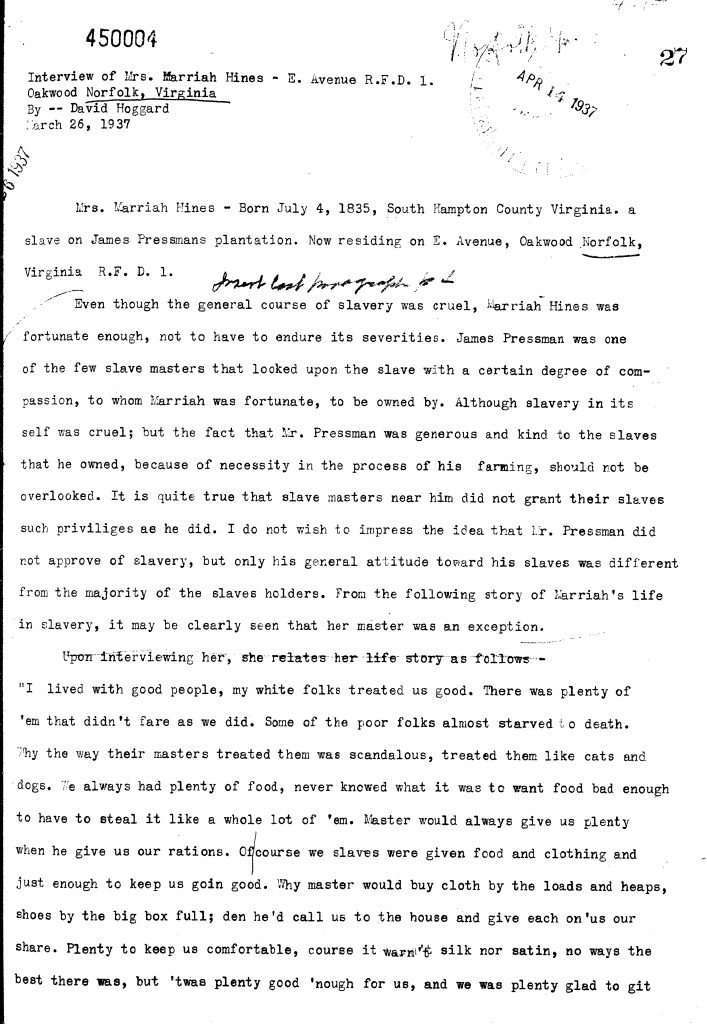 Marriah is about four feet and a half tall and weighs about one hundred pounds. She has a pretty head of white hair covering her round brown face. Her memory of her mother and father is very vague, due to their death when she was young. She is able to dress herself practically without help, and to get about from place to place alone, enjoying talking about religion and what she hears about the world of today.

Even though the general course of slavery was cruel, Marriah Hines was fortunate enough, not to have to endure its severities. James Pressman was one of the few slave masters that looked upon the slave with a certain degree of compassion, to whom Marriah was fortunate, to be owned by. Although slavery in its self was cruel; but the fact that Mr. Pressman was generous and kind to the slaves that he owned, because of necessity in the process of his farming, should not be overlooked. It is quite true that slave masters near him did not grant their slaves such priviliges as he did. I do not wish to impress the idea that Mr. Pressman did not approve of slavery, but only his general attitude toward his slaves was different from the majority of the slaves holders. From the following story of Marriah’s life in slavery, it may be clearly seen that her master was an exception.

Upon interviewing her, she relates her life story as follows—

“I lived with good people, my white folks treated us good. There was plenty of ’em that didn’t fare as we did. Some of the poor folks almost starved to death. Why the way their masters treated them was scandalous, treated them like cats and dogs. We always had plenty of food, never knowed what it was to want food bad enough to have to steal it like a whole lot of ’em. Master would always give us plenty when he give us our rations. Of course we slaves were given food and clothing and just enough to keep us goin good. Why master would buy cloth by the loads and heaps, shoes by the big box full; den he’d call us to the house and give each on ‘us our share. Plenty to keep us comfortable, course it warn’t silk nor satin, no ways the best there was, but ’twas plenty good ‘nough for us, and we was plenty glad to git 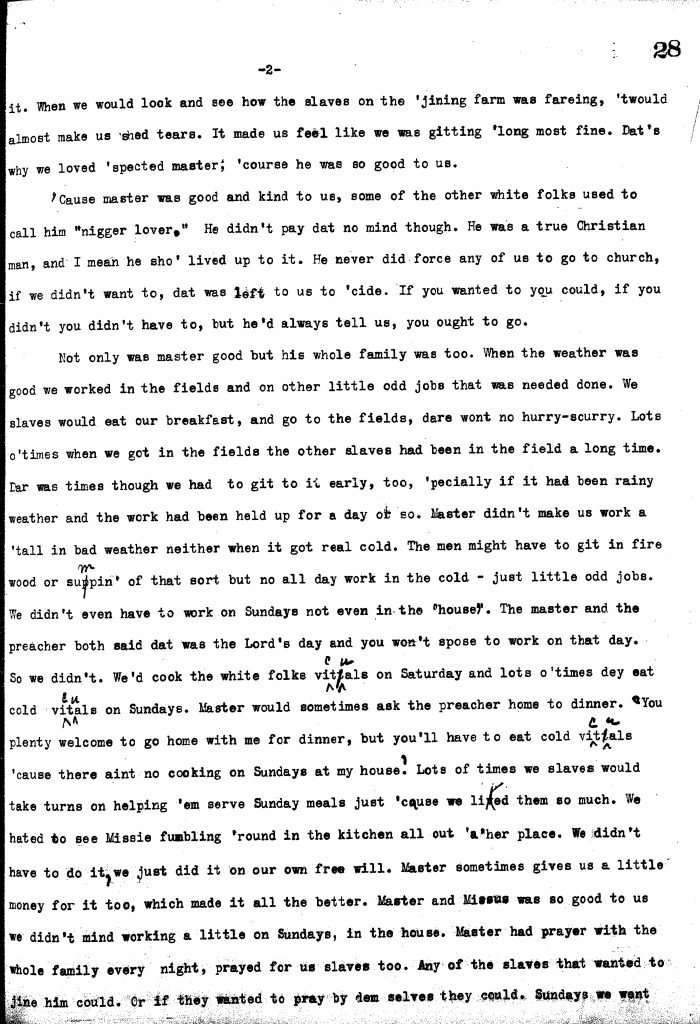 it. When we would look and see how the slaves on the ‘jining farm was fareing, ‘twould almost make us shed tears. It made us feel like we was gitting ‘long most fine. Dat’s why we loved ‘spected master, ‘course he was so good to us.

‘Cause master was good and kind to us, some of the other white folks used to call him “nigger lover.” He didn’t pay dat no mind though. He was a true Christian man, and I mean he sho’ lived up to it. He never did force any of us to go to church, if we didn’t want to, dat was left to us to ‘cide. If you wanted to you could, if you didn’t you didn’t have to, but he’d always tell us, you ought to go.

Not only was master good but his whole family was too. When the weather was good we worked in the fields and on other little odd jobs that was needed done. We slaves would eat our breakfast, and go to the fields, dare wont no hurry-scurry. Lots o’ times when we got in the fields the other slaves had been in the field a long time. Dar was times though we had to git to it early, too, ‘pecially if it had been rainy weather and the work had been held up for a day or so. Master didn’t make us work a ‘tall in bad weather neither when it got real cold. The men might have to git in fire wood or sumpin’ of that sort but no all day work in the cold—just little odd jobs. We didn’t even have to work on Sundays not even in the “house”. The master and the preacher both said dat was the Lord’s day and you won’t spose to work on that day. So we didn’t. We’d cook the white folks victuals on Saturday and lots o’ times dey eat cold victuals on Sundays. Master would sometimes ask the preacher home to dinner. ‘You plenty welcome to go home with me for dinner, but you’ll have to eat cold victuals ’cause there aint no cooking on Sundays at my house.’ Lots of times we slaves would take turns on helping ’em serve Sunday meals just ’cause we liked them so much. We hated to see Missie fumbling ’round the kitchen all out ‘a ‘her place. We didn’t have to do it, we just did it on our own free will. Master sometimes gives us a little money for it too, which made it all the better. Master and Missus was so good to us we didn’t mind working a little on Sundays, in the house. Master had prayer with the whole family every night, prayed for us slaves too. Any of the slaves that wanted to jine him could. Or if they wanted to pray by dem selves they could. Sundays we went 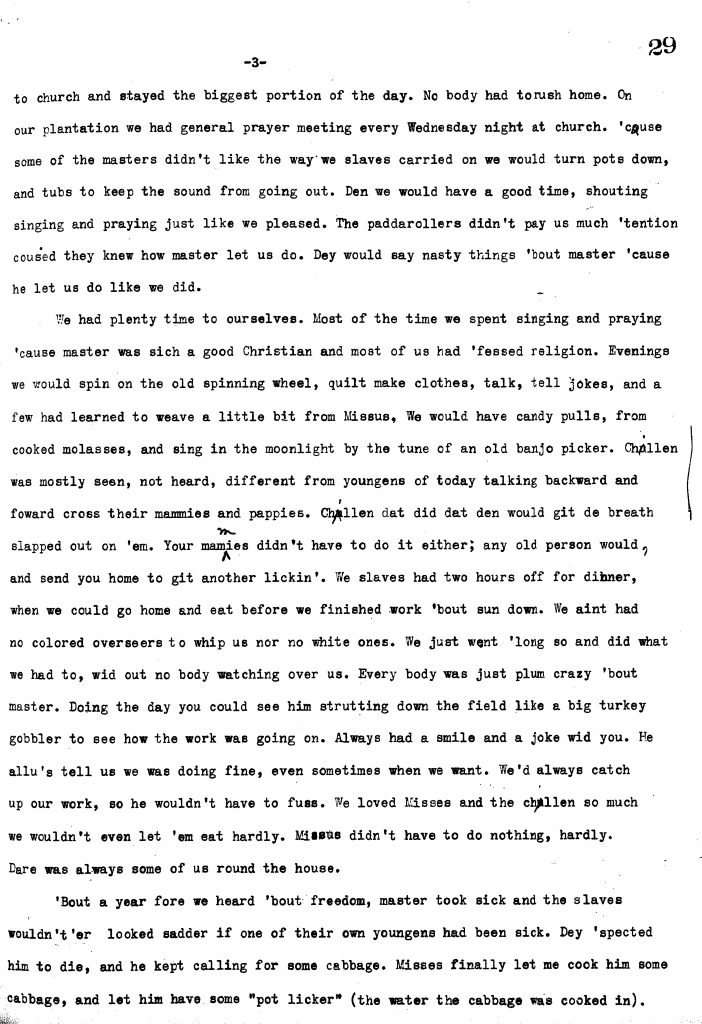 to church and stayed the biggest portion of the day. No body had to rush home. On our plantation we had general prayer meeting every Wednesday night at church. ’cause some of the masters didn’t like the way we slaves carried on we would turn pots down, and tubs to keep the sound from going out. Den we would have a good time, shouting singing and praying just like we pleased. The paddarollers didn’t pay us much ‘tention coused they knew how master let us do. Dey would say nasty things ’bout master ’cause he let us do like we did.

We had plenty time to ourselves. Most of the time we spent singing and praying ’cause master was sich a good Christian and most of us had ‘fessed religion. Evenings we would spin on the old spinning wheel, quilt make clothes, talk, tell jokes, and a few had learned to weave a little bit from Missus, We could have candy pulls, from cooked molasses, and sing in the moonlight by the tune of an old banjo picker. Chillen was mostly seen, not heard, different from youngens of today talking backward and forward cross their mammies and pappies. Chillen dat did dat den would git de breath slapped out on ’em. Your mammies didn’t have to do it either; any old person would, and send you home to git another lickin’. We slaves had two hours off for dinner, when we could go home and eat before we finished work ’bout sun down. We aint had no colored overseers to whip us nor no white ones. We just went ‘long so and did what we had to, wid out no body watching over us. Every body was just plum crazy ’bout master. Doing the day you could see him strutting down the field like a big turkey gobbler to see how the work was going on. Always had a smile and a joke wid you. He allu’s tell us we was doing fine, even sometimes when we want. We’d always catch up our work, so he wouldn’t have to fuss. We loved Misses and the chillen so much we wouldn’t even let ’em eat hardly. Missus didn’t have to do nothing, hardly. Dare was always some of us round the house.

‘Bout a year fore we heard ’bout freedom, master took sick and the slaves wouldn’t’er looked sadder if one of their own youngens had been sick. Dey ‘spected him to die, and he kept calling for some cabbage. Misses finally let me cook him some cabbage, and let him have some “pot licker” (the water the cabbage was cooked in). 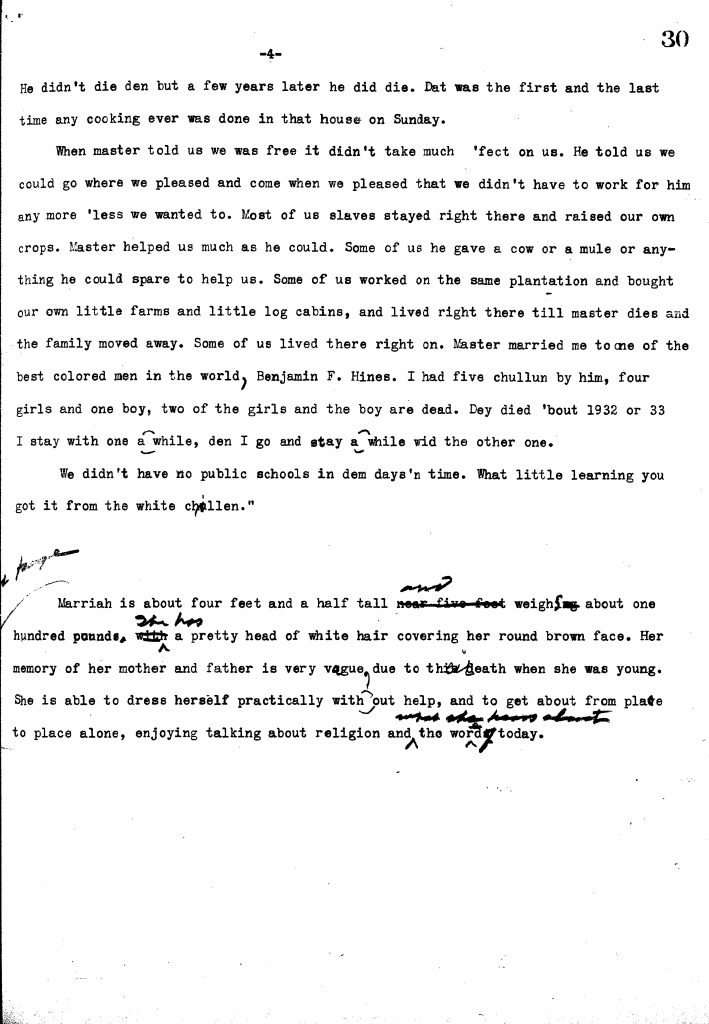 He didn’t die den but a few years later he did die. Dat was the first and the last time any cooking ever was done in that house on Sunday.

When master told us we was free it didn’t take much ‘fect on us. He told us we could go where we pleased and come when we pleased that we didn’t have to work for him any more ‘less we wanted to. Most of us slaves stayed right there and raised our own crops. Master helped us much as he could. Some of us he gave a cow or a mule or anything he could spare to help us. Some of us worked on the same plantation and bought our own little farms and little log cabins, and lived right there till master dies and the family moved away. Some of us lived there right on. Master married me to one of the best colored men in the world, Benjamin F. Hines. I had five chullun by him, four girls and one boy, two of the girls and the boy are dead. Dey died ’bout 1932 or 33 I stay with one awhile, den I go and stay awhile wid the other one.

We didn’t have no public schools in dem days’n time. What little learning you got it from the white chillen.”

RELATED CONTENT
Categories:
Type:
MAP
TIMELINE
March 27, 1937
Marriah Hines, a former slave, tells interviewer David Hoggard about life on the plantation of James Pressman. She contrasts their relatively kind treatment with that of slaves on other plantations.
FURTHER READING