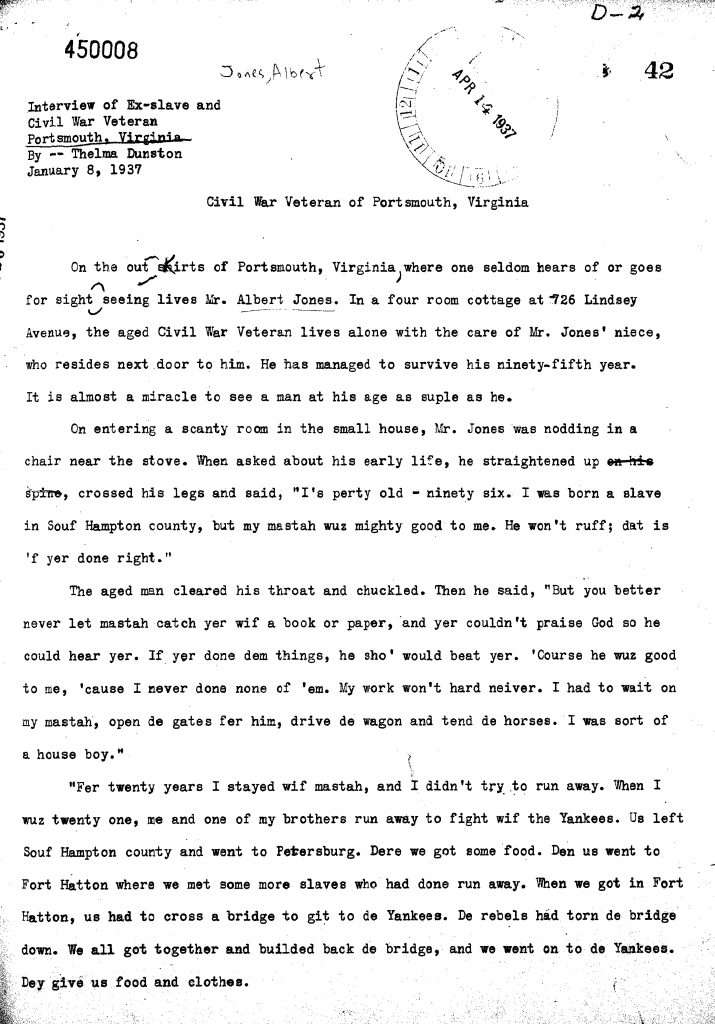 On the outskirts of Portsmouth, Virginia, where one seldom hears of or goes for sightseeing lives Mr. Albert Jones. In a four room cottage at 726 Lindsey Avenue, the aged Civil War Veteran lives alone with the care of Mr. Jones’ niece, who resides next door to him. He has managed to survive his ninety-fifth year. It is almost a miracle to see a man at his age as suple as he.

On entering a scanty room in the small house, Mr. Jones was nodding in a chair near the stove. When asked about his early life, he straightened up, crossed his legs and said, “I’s perty old—ninety six. I was born a slave in Souf Hampton county, but my mastah wuz mighty good to me. He won’t ruff; dat is ‘f yer done right.”

The aged man cleared his throat and chuckled. Then he said, “But you better never let mastah catch yer wif a book or paper, and yer couldn’t praise God so he could hear yer. If yer done dem things, he sho’ would beat yer. ‘Course he wuz good to me, ’cause I never done none of ’em. My work won’t hard neiver. I had to wait on my mastah, open de gates fer him, drive de wagon and tend de horses. I was sort of a house boy.”

“Fer twenty years I stayed wif mastah, and I didn’t try to run away. When I wuz twenty one, me and one of my brothers run away to fight wif the Yankees. Us left Souf Hampton county and went to Petersburg. Dere we got some food. Den us went to Fort Hatton where we met some more slaves who had done run away. When we got in Fort Hatton, us had to cross a bridge to git to de Yankees. De rebels had torn de bridge down. We all got together and builded back de bridge, and we went on to de Yankees. Dey give us food and clothes. 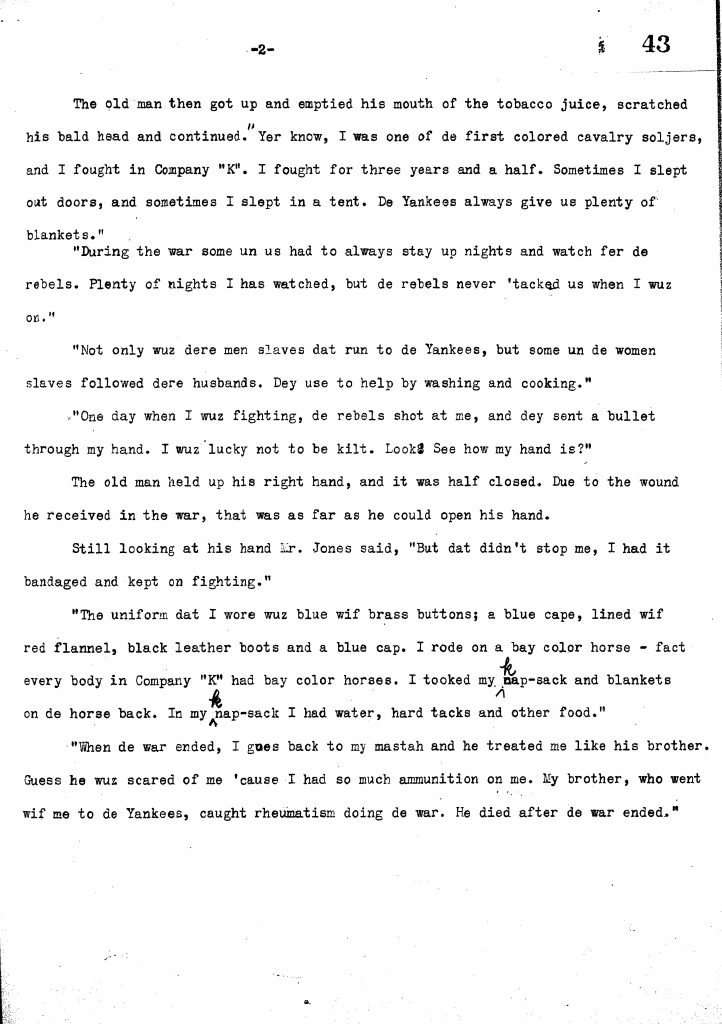 The old man then got up and emptied his mouth of the tobacco juice, scratched his bald head and continued. “Yer know, I was one of de first colored cavalry soljers, and I fought in Company “k”. I fought for three years and a half. Sometimes I slept out doors, and sometimes I slept in a tent. De Yankees always give us plenty of blankets.”

“During the war some un us had to always stay up nights and watch fer de rebels. Plenty of nights I has watched, but de rebels never ‘tacked us when I wuz on.”

“Not only wuz dere men slaves dat run to de Yankees, but some un de women slaves followed dere husbands. Dey use to help by washing and cooking.”

“One day when I wuz fighting, de rebels shot at me, and dey sent a bullet through my hand. I wuz lucky not to be kilt. Look! See how my hand is?”

The old man held up his right hand, and it was half closed. Due to the wound he received in the war, that was as far as he could open his hand.

Still looking at his hand Mr. Jones said, “But dat didn’t stop me, I had it bandaged and kept on fighting.”

“The uniform dat I wore wuz blue wif brass buttons; a blue cape, lined wif red flannel, black leather boots and a blue cap. I rode on a bay color horse – fact every body in Company “K” had bay color horses. I tooked my knap-sack and blankets on de horse back. In my knap-sack I had water, hard tacks and other food.”

“When de war ended, I goes back to my mastah and he treated me like his brother. Guess he wuz scared of me ’cause I had so much ammunition on me. My brother, who went wif me to de Yankees, caught rheumatism doing de war. He died after de war ended.”

RELATED CONTENT
Categories:
Type:
MAP
TIMELINE
January 8, 1937
Albert Jones, a former slave, tells interviewer Thelma Dunston about his experiences as a slave and about running away to join the Union Army during the Civil War.
FURTHER READING