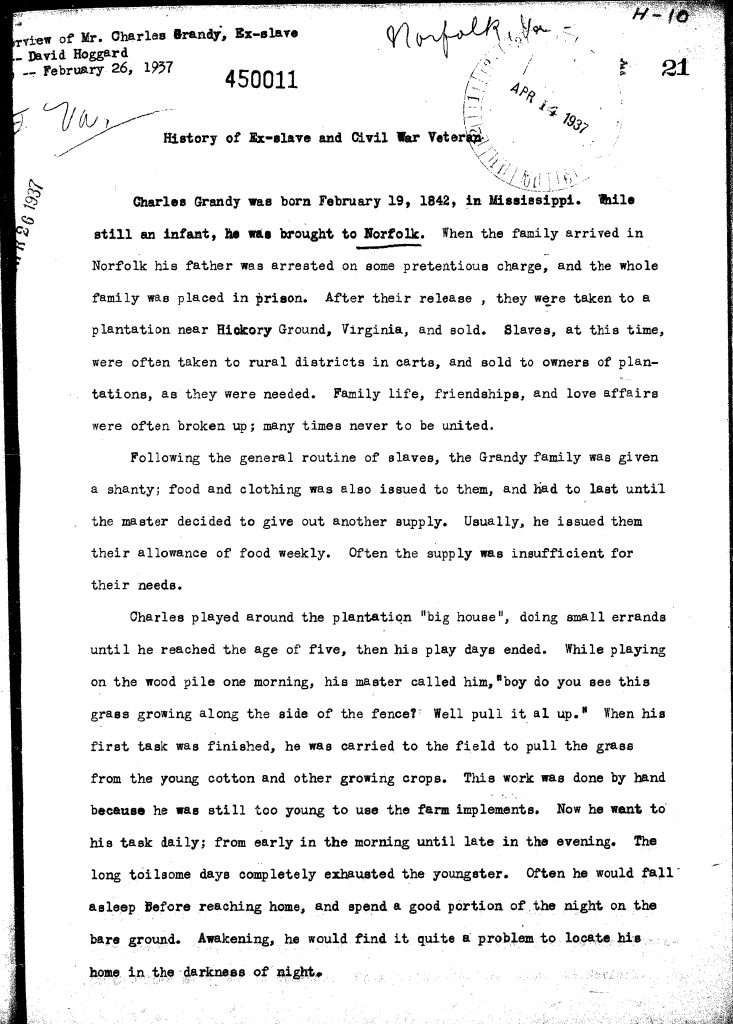 Charles Grandy was born on February 19, 1842, in Mississippi. While still an infant, he was brought to Norfolk. When the family arrived in Norfolk his father was arrested on some pretentious charge, and the whole family was placed in prison. After their release, they were taken to a plantation near Hickory Ground, Virginia, and sold. Slaves, at this time, were often taken to rural districts in carts, and sold to owners of plantations, as they were needed. Family life, friendships, and love affairs were often broken up; many times never to be united.

Following the general routine of slaves, the Grandy family was given a shanty; food and clothing was also issued to them, and had to last until the master decided to give out another supply. Usually, he issued them their allowance of food weekly. Often the supply was insufficient for their needs.

Charles played around the plantation “big house”, doing small errands until he reached the age of five, then his play days ended. While playing on the wood pile one morning, his master called him, “boy do you see this grass growing along the side of the fence? Well pull it al up.” When his first task was finished, he was carried to the field to pull the grass from the young cotton and other growing crops. This work was done by hand because he was still too young to use the farm implements. Now he went to his task daily; from early in the morning until late in the evening. The long toilsome days completely exhausted the youngster. Often he would fall asleep before reaching home, and spend a good portion of the night on the bare ground. Awakening, he would find it quite a problem to locate his home in the darkness of night. 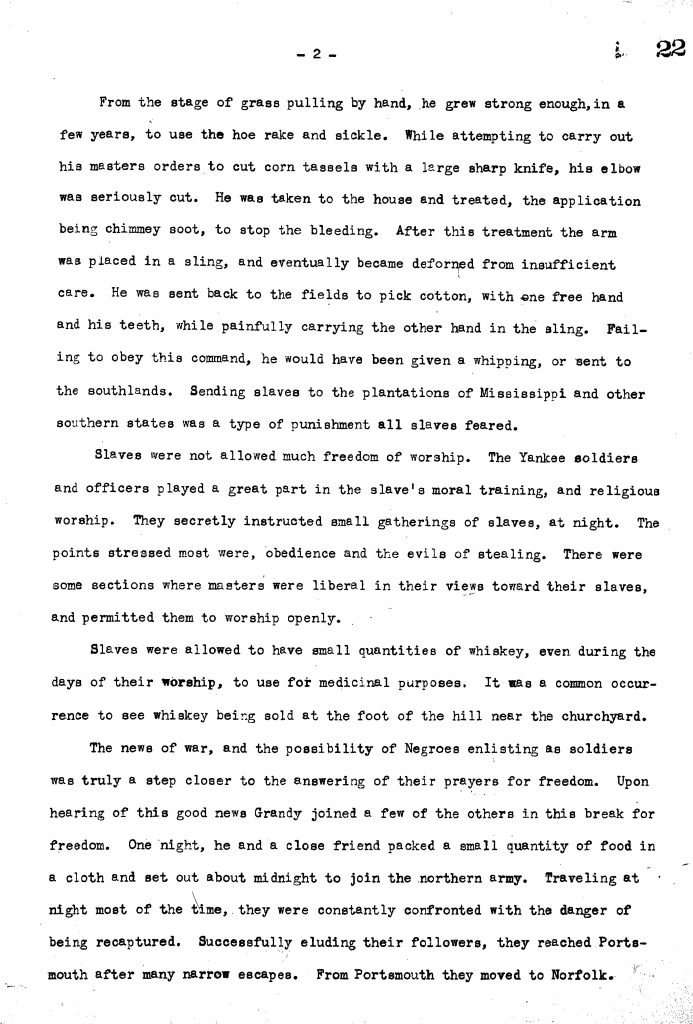 From the stage of grass pulling by hand, he grew strong enough, in a few years, to use the hoe rake and sickle. While attempting to carry out his masters orders to cut corn tassels with a large sharp knife, his elbow was seriously cut. He was taken to the house and treated, the application being chimmey soot, to stop the bleeding. After this treatment the arm was placed in a sling, and eventually became deformed from insufficient care. He was sent back to the fields to pick cotton, with one free hand and his teeth, while painfully carrying the other in the sling. Failing to obey this command, he would have been given a whipping, or sent to the southlands. Sending slaves to the plantations of Mississippi and other southern states was a type of punishment all slaves feared.

Slaves were not allowed much freedom of worship. The Yankee soldiers and officers played a great part in the slave’s moral training, and religious worship. They secretly instructed small gatherings of slaves, at night. The points stressed most were, obedience and the evils of stealing. There were some sections where masters were liberal in their views toward their slaves, and permitted them to worship openly.

Slaves were allowed to have small quantities of whiskey, even during the days of their worship, to use for medicinal purposes. It was a common occurrence to see whiskey being sold at the foot of the hill near the churchyard.

The news of war, and the possibility of Negroes enlisting as soldiers was truly a step closer to the answering of their prayers for freedom. Upon hearing of this good news Grandy joined a few of the others in this break for freedom. One night, he and a close friend packed a small quantity of food in a cloth and set out about midnight to join the northern army. Traveling at night most of the time, they were constantly confronted with the danger of being recaptured. Successfully eluding their followers, they reached Portsmouth after many narrow escapes. From Portsmouth they moved to Norfolk. 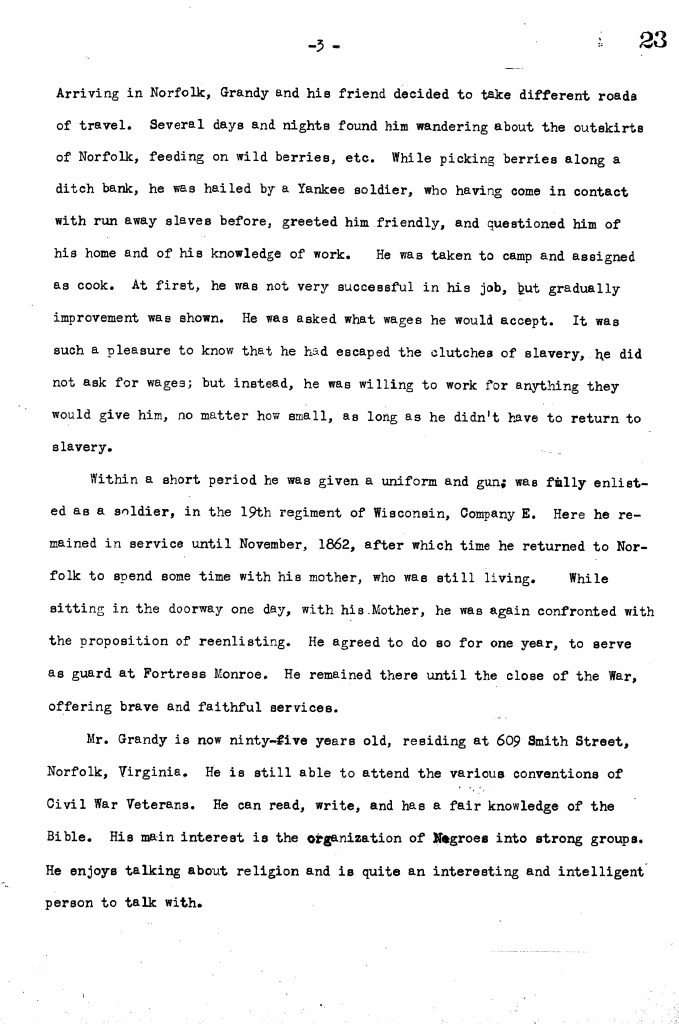 Arriving in Norfolk, Grandy and his friend decided to take different roads of travel. Several days and nights found him wandering about the outskirts of Norfolk, feeding on wild berries, etc. While picking berries along a ditch bank, he was hailed by a Yankee soldier, who having come in contact with run away slaves before, greeted him friendly, and questioned him of his home and of his knowledge of work. He was taken to camp and assigned as cook. At first, he was not very successful in his job, but gradually improvement was shown. He was asked what wages he would accept. It was such a pleasure to know that he had escaped the clutches of slavery, he did not ask for wages; but instead, he was willing to work for anything they would give him, no matter how small, as long as he didn’t have to return to slavery.

Within a short period he was given a uniform and gun; was fully enlisted as a soldier, in the 19th regiment of Wisconsin, Company E. Here he remained in service until November, 1862, after which time he returned to Norfolk to spend some time with his mother, who was still living. While sitting in the doorway one day, with his Mother, he was again confronted with the proposition of reenlisting. He agreed to do so for one year, to serve as guard at Fortress Monroe. He remained there until the close of he War, offering brave and faithful services.

Mr. Grandy is now ninty-five years old, residing at 609 Smith Street, Norfolk, Virginia. He is still able to attend the various conventions of Civil War Veterans. He can read, write, and has a fair knowledge of the Bible. His main interest is the organization of Negroes into strong groups. He enjoys talking about religion and is quite an interesting and intelligent person to talk with.