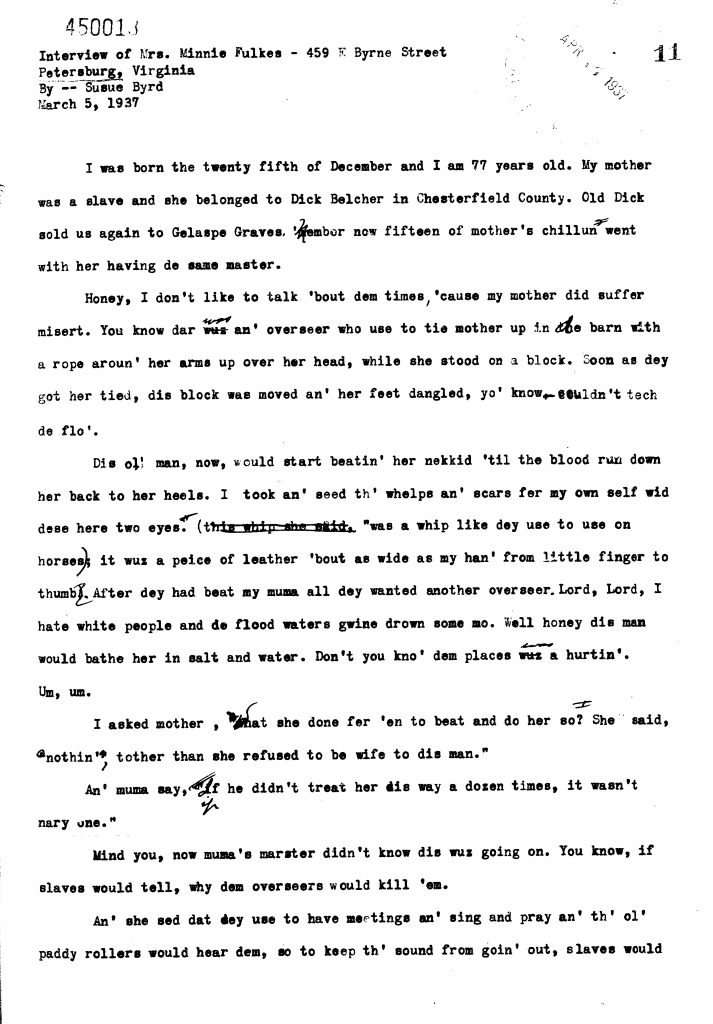 I was born the twenty fifth of December and I am 77 years old. My mother was a slave and she belonged to Dick Belcher in Chesterfield County. Old Dick sold us again to Gelaspe Graves. ‘Member now fifteen of mother’s chillun went with her having de same master.

Honey, I don’t like to talk ’bout dem times, ’cause my mother did suffer misert. You know dar was an’ overseer who use to tie mother up in de barn with a rope aroun’ her arms up over her head, while she stood on a block. Soon as dey got her tied, dis block was moved an’ her feet dangled, yo’ know—couldn’t tech de flo’.

Dis ol’ man, now, would start beatin’ her nekkid ’til the blood run down her back to her heels. I took an’ seed th’ whelps an’ scars fer my own self wid dese here two eyes. (“was a whip like dey use to use on horses); it wuz a peice of leather ’bout as wide as my han’ from little finger to thumb. After dey had beat my muma all dey wanted another overseer. Lord, Lord, I hate white people and de flood waters gwine drown some mo. Well honey dis man would bathe her in salt and water. Don’t you kno’ dem places was a hurtin’. Um, um.

I asked mother, “what she done fer ‘en to beat and do her so? She said, nothin, tother than she refused to be wife to dis man.”

An’ muma say, “if he didn’t treat her dis way a dozen times, it wasn’t nary one.”

Mind you, now muma’s marster didn’t know dis wuz going on. You know, if slaves would tell, why dem overseers would kill ’em.

An’ she sed dat dey use to have meetings an’ sing and pray an’ th’ ol’ paddy rollers would hear dem, so to keep th’ sound from goin’ out, slaves would 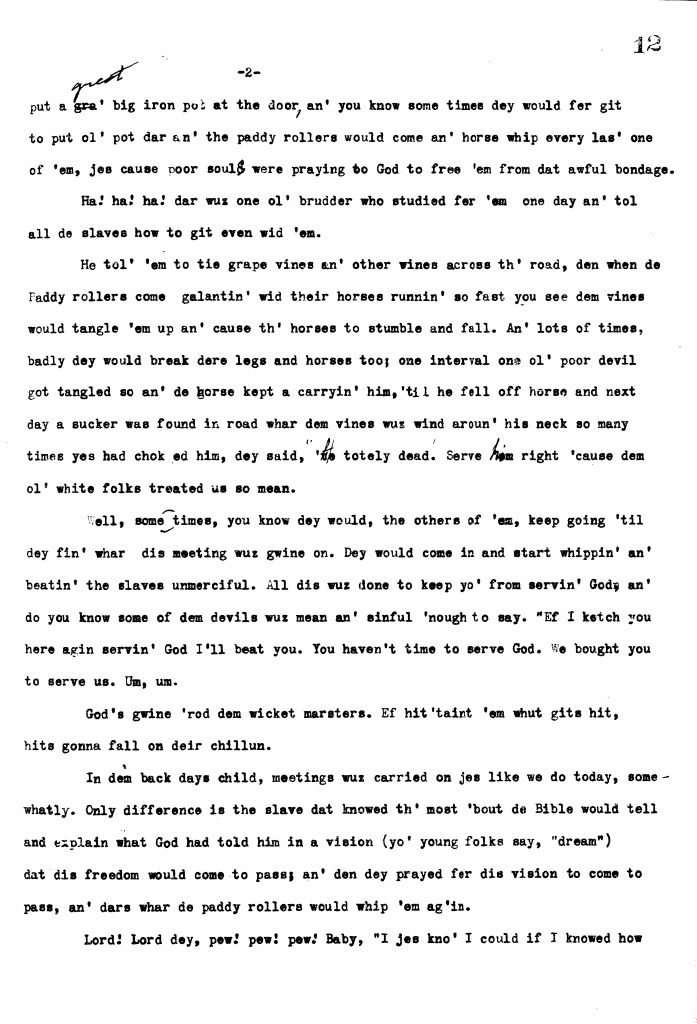 put a great big iron pot at the door, an’ you know some times dey would fer git to put ol’ pot dar an’ the paddy rollers would come an’ horse whip every las’ one of ’em, jes cause poor souls were praying to God to free ’em from dat awful bondage.

Ha! ha! ha! dar wuz one ol’ brudder who studied fer ’em one day an’ tol all de slaves how to git even wid ’em.

He tol’ ’em to tie grape vines an’ other vines across th’ road, den when de Paddy rollers come galantin’ wid their horses runnin’ so fast you see dem vines would tangle ’em up an’ cause th’ horses to stumble and fall. An’ lots of times, badly dey would break dere legs and horses too; one interval one ol’ poor devil got tangled so an’ de horse kept a carryin’ him, ’til he fell off horse and next day a sucker was found in road whar dem vines wuz wind aroun’ his neck so many times yes had choked him, dey said, “He totely dead.” Serve him right ’cause dem ol’ white folks treated us so mean.

Well sometimes, you know dey would, the others of ’em, keep going ’til dey fin’ whar dis meeting wuz gwine on. Dey would come in and start whippin’ an’ beatin’ the slaves unmerciful. All dis wuz done to keep yo’ from servin’ God an’ do you know some of dem devils wuz mean an’ sinful ‘nough to say. “Ef I ketch you here agin servin’ God I’ll beat you. You haven’t time to serve God. We bought you to serve us. Um, um.

In dem back days child, meetings wuz carried on jes like we do today, somewhatly. Only difference is the slave dat knowed th’ most ’bout de Bible would tell and explain what God had told him in a vision (yo’ young folks say, “dream”) dat dis freedom would come to pass; an’ den dey prayed fer dis vision to come to pass, an’ dars whar de paddy rollers would whip ’em ag’in. 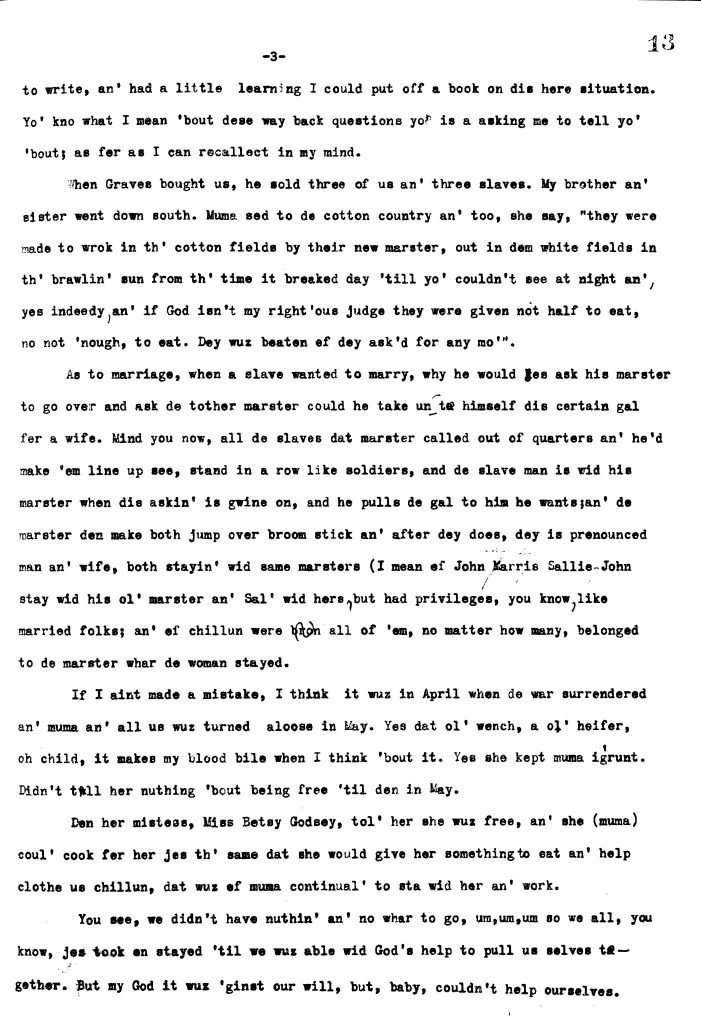 to write, an’ had a little learning I could put off a book on dis here situation. Yo’ kno what I mean ’bout dese way back questions yo’ is a asking me to tell yo’ ’bout; as fer as I can recallect in my mind.

When Graves bought us, he sold three of us an’ three slaves. My brother an’ sister went down south. Muma sed to de cotton country an’ too, she say, “they were made to work in th’ cotton fields by their new marster, out in dem white fields in th’ brawlin’ sun from th’ time it breaked day ’till yo’ couldn’t see at night an’, yes indeedy, an’ if God isn’t my right’ous judge they were given not half to eat, no not ‘nough, to eat. Dey wuz beaten ef dey ask’d for any mo'”.

As to marriage, when a slave wanted to marry, why he would jes ask his marster to go over and ask de tother marster could he take unto himself dis certain gal fer a wife. Mind you now, all de slaves dat marster called out of quarters an’ he’d make ’em line up see, stand in a row like soldiers, and de slave man is wid his marster when dis askin’ is gwine on, and he pulls de gal to him he wants; an’ de marster den make both jump over broom stick an’ after dey does, dey is pronounced man an’ wife, both stayin’ wid same marsters (I mean of John Harris Sallie John stay wid his ol’ marster an’ Sal’ wid hers, but had privileges, you know, like married folks; an’ ef chillun were born all of ’em, no matter how many, belonged to de marster whar de woman stayed.

If I aint made a mistake, I think it wuz in April when de war surrendered an’ muma an’ all us wuz turned aloose in May. Yes dat ol’ wench, a ol’ heifer, oh child, it makes my blood bile when I think ’bout it. Yes she kept muma ig’runt. Didn’t tell her nuthing ’bout being free ’til den in May.

Den her mistess, Miss Betsey Godsey, tol’ her she wuz free, an’ she (muma) coul’ cook fer her jes th’ same dat she would give her something to eat an’ help clothe us chillun, dat wuz of muma continual’ to sta wid her an’ work.

You see, we didn’t have nuthin’ an’ no whar to go, um, um, um so we all, you know, jes took en stayed ’til we wuz able wid God’s help to pull us selves together. But my God it wuz ‘ginst our will, but, baby, couldn’t help ourselves. 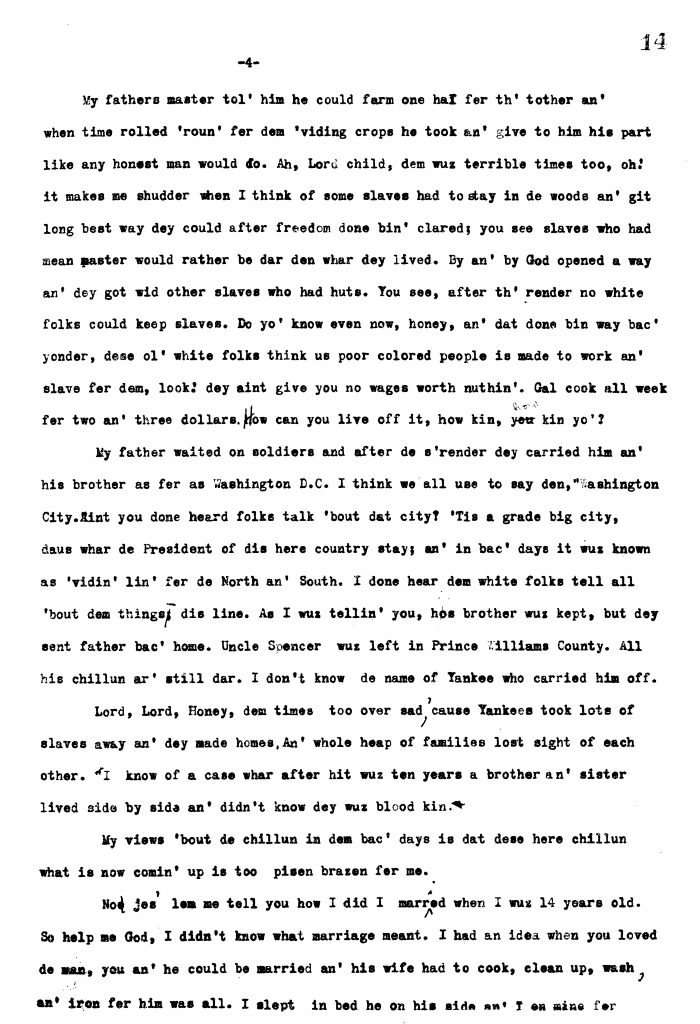 My fathers master tol’ him he could farm one hal fer th’ tother an’ when time rolled ‘roun, fer dem ‘viding crops he took an’ give to him his part like any honest man would do. Ah, Lord child, dem wuz terrible times too, oh! it makes me shudder when I think of some slaves had to stay in de woods an’ git long best way dey could after freedom done bin’ clared; you see slaves who had mean master would rather be dar den whar dey lived. By an’ by God opened a way an’ dey got wid other slaves who had huts. You see, after th’ render no white folks could keep slaves. Do yo’ know even now, honey, an’ dat done bin way bac’ yonder, dese ol’ white folks think us poor colored people is made to work an’ slave fer dem, look! dey aint give you no wages worth nuthin’. Gal cook all week fer two an’ three dollars. How can you live off it, how kin, how kin yo’?

My father waited on soldiers and after de s’render dey carried him an’ his brother as fer as Washington D.C. I think we all use to say den, “Washington City. Aint you done heard folks talk ’bout dat city? ‘Tis a grade big city, daus whar de President of dis here country stay; an’ in bac’ days it wuz known as ‘vidin’ lin’ fer de North an’ South. I done hear dem white folks tell all ’bout dem things dis line. As I wuz tellin’ you, his brother wuz kept, but dey sent father bac’ home. Uncle Spencer wuz left in Prince Williams County. All his chillun ar’ still dar. I don’t know de name of Yankee who carried him off.

Lord, Lord, Honey, dem times too over sad, ’cause Yankees took lots of slaves away an’ dey made homes, An’ whole heap of families lost sight of each other. I know of a case whar afer hit wuz ten years a brother an’ sister lived side by side an’ didn’t know dey wuz blood kin.

My views ’bout de chillun in dem bac’ days is dat dese here chillun what is now comin’ up is too pisen brazen fer me.

No jes’ lem me tell you how I did I married when I wuz 14 years old. So help me God, I didn’t know what marriage meant. I had no idea when you loved de man, you an’ he could be married an’ his wife had to cook, clean up, wash, an’ iron for him was all. I slept in bed he on his side an’ I on mine fer 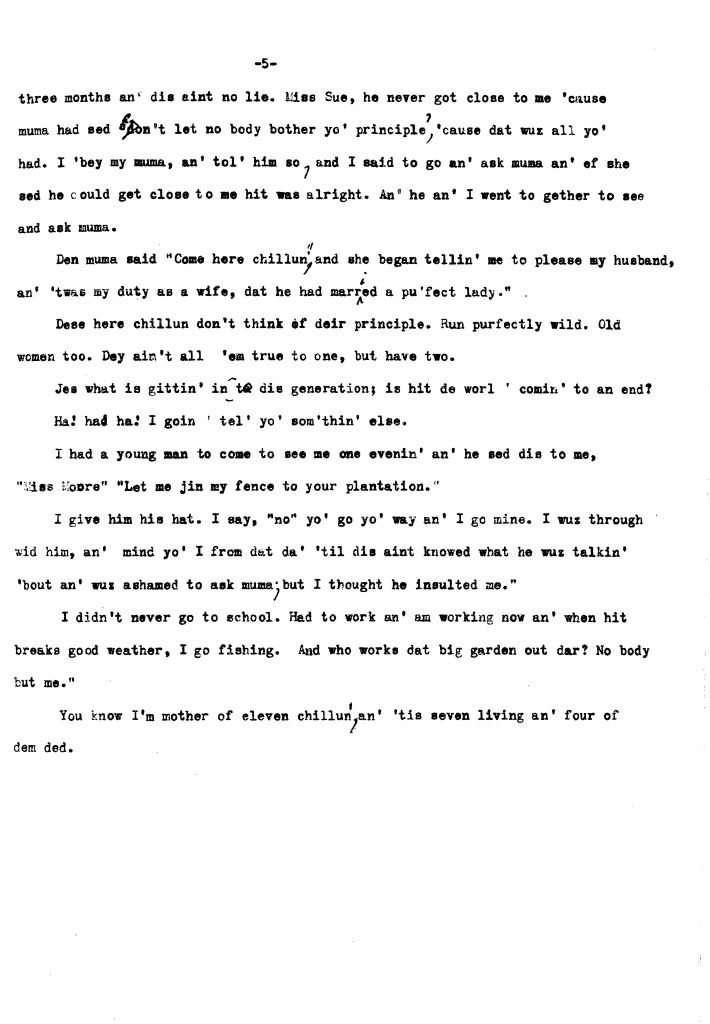 three months an’ dis aint no lie. Miss Sue, he never got close to me ’cause muma had sed ‘Don’t let no body bother yo’ principle’, ’cause dat wuz all yo’ had. I ‘bey my muma, an’ tol’ him so, and I said to go an’ ask muma an’ ef she sed he could get close to me hit was alright. An’ he an’ I went to gether to see and ask muma.

Den muma said “Come here chillun”, and she began tellin’ me to please my husband, an’ ’twas my duty as a wife, dat he had married a pu’fect lady.”

Jes what is gittin’ into dis generation; is hit de worl’ comin’ to an end?

I had a young man to come to see me one evenin’ an’ he sed dis to me, “Miss Moore” “Let me jin my fence to your plantation.”

I didn’t never go to school. Had to work an’ am working now an’ when hit breaks good weather, I go fishing. And who works dat big garden out dar? No body but me.”

You know I’m mother of eleven chillun’, an’ ’tis seven living an’ four of dem ded.

RELATED CONTENT
Categories:
Type:
MAP
TIMELINE
March 5, 1937
Minnie Fulkes, a former slave, recounts her life to Susie Byrd. She tells about the horrific beatings her mother received, slave marriages, and her own marriage at a young age.
FURTHER READING