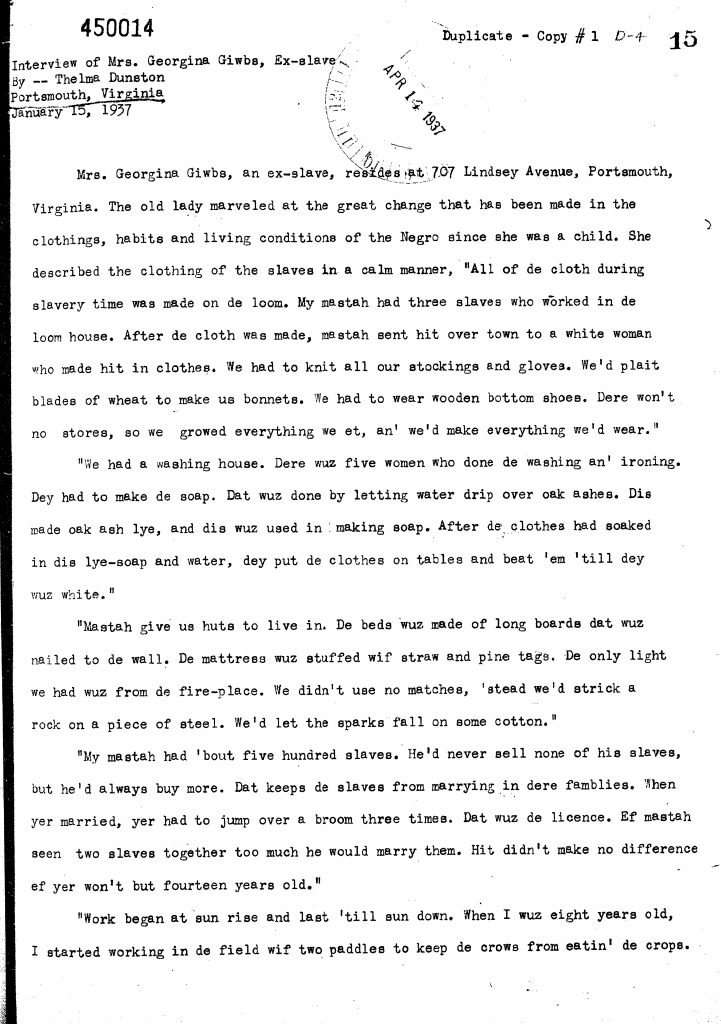 Mrs. Georgina Giwbs, an ex-slave, resides at 707 Lindsey Avenue, Portsmouth, Virginia. The old lady marveled at the great change that has been made in the clothings, habits and living conditions of the Negro since she was a child. She described the clothing of the slaves in a calm manner, “All of de cloth during slavery time was made on de loom. My mastah had three slaves who worked in de loom house. After de cloth was made, mastah sent hit over town to a white woman who made hit in clothes. We had to knit all our stockings and gloves. We’d plait blades of wheat to make us bonnets. We had to wear wooden bottom shoes. Dere won’t no stores, so we growed everything we et, an’ we’d make everything we’d wear.”

“Mastah give us huts to live in. De beds wuz made of long boards dat wuz nailed to de wall. De mattress wuz stuffed wif straw and pine tags. De only light we had wuz from de fire-place. We didn’t use no matches, ‘stead we’d strick a rock on a piece of steel. We’d let the sparks fall on some cotton.”

“My mastah had ’bout five hundred slaves. He’d never sell none of his slaves, but he’d always buy more. Dat keeps de slaves from marrying in dere famblies. When yer married, yer had to jump over a broom three times. Dat wuz de licence. Ef mastah seen two slaves together too much he would marry them. Hit didn’t make no difference ef yer won’t but fourteen years old.”

“Work began at sun rise and last ’till sun down. When I wuz eight years old, I started working in de field wif two paddles to keep de crows from eatin’ de crops. 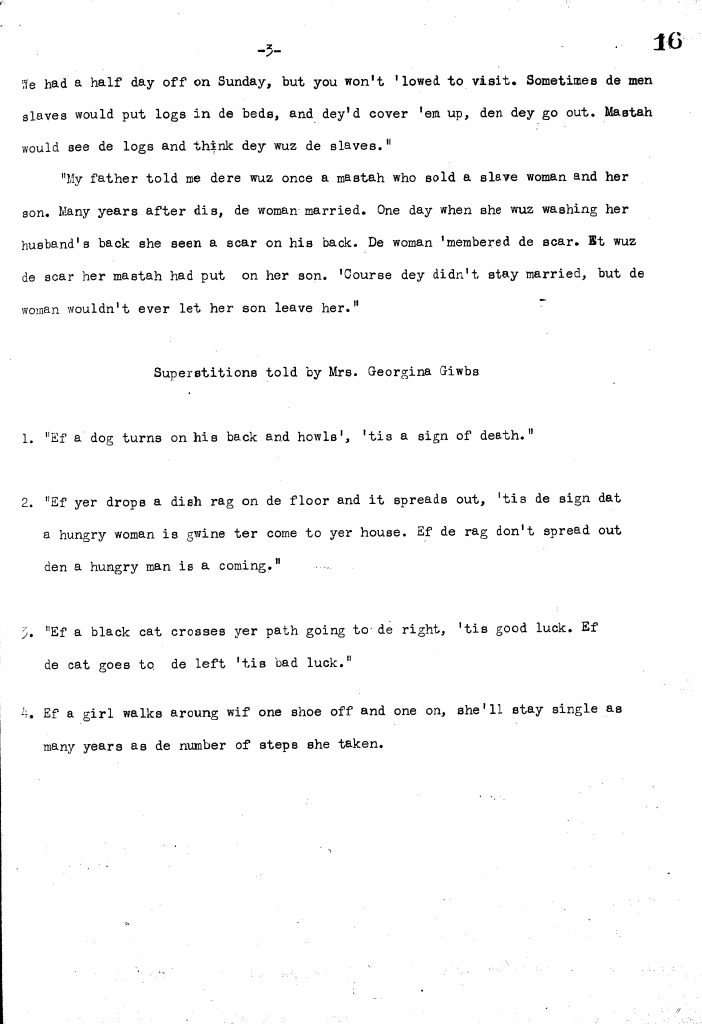 We had a half day off on Sunday, but you won’t ‘lowed to visit. Sometimes de men slaves would put logs in de beds, and dey’d cover ’em up, den dey go out. Mastah would see de logs and think dey wuz de slaves.”

“My father told me dere wuz once a mastah who sold a slave woman and her son. Many years after dis, de woman married. One day when she wuz washing her husband’s back she seen a scar on his back. De woman ‘membered de scar. Et wuz de scar her mastah had put on her son. ‘Course dey didn’t stay married, but de woman wouldn’t ever let her son leave her.”

2. “Ef yer drops a dish rag on de floor and it spreads out, ’tis de sign dat a hungry woman is gwine ter come to yer house. Ef de rag don’t spread out den a hungry man is a coming.”

4. Ef a girl walks aroung wif one shoe off and one on, she’ll stay single as many years as de number of steps she taken.