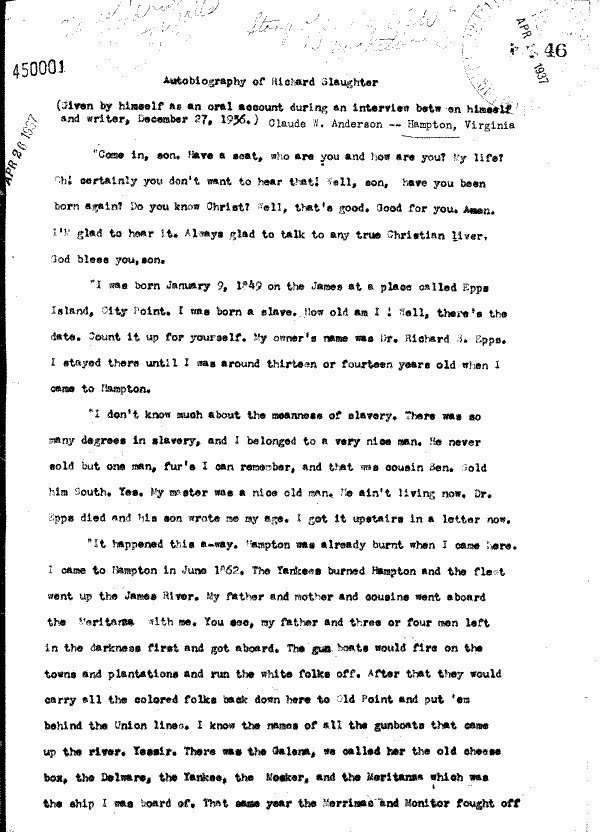 (Given by himself as an oral account during an interview between himself and writer, December 27, 1936.) Claude W. AndersonHampton, Virginia

“Come in, son. Have a seat, who are you and how are you? My life? Oh! certainly you don’t want to hear that! Well, son, have you been born again? Do you know Christ? Well, that’s good. Good for you. Amen. I’m glad to hear it. Always glad to talk to any true Christian liver. God bless you, son.

“I was born January 9, 1849 on the James at a place called Epps Island, City Point. I was born a slave. How old am I! Well, there’s the date. Count it up for yourself. My owner’s name was Dr. Richard B. Epps. I stayed there until I was around thirteen or fourteen years old when I came to Hampton.

“I don’t know much about the meanness of slavery. There was so many degrees in slavery, and I belonged to a very nice man. He never sold but one man, fur’s I can remember, and that was cousin Ben. Sold him South. Yes. My master was a nice old man. He ain’t living now. Dr. Epps died and his son wrote me my age. I got it upstairs in a letter now.

“It happened this a-way. Hampton was already burnt when I came here. I came to Hampton in June 1862. The Yankees burned Hampton and the fleet went up the James River. My father and mother and cousins went aboard the Meritana with me. You see, my father and three or four men left in the darkness first and got aboard. The gun boats would fire on the towns and plantations and run the white folks off. After that they would carry all the colored folks back down here to Old Point and put ’em behind the Union lines. I know the names of all the gunboats that came up the river. Yessir. There was the Galena, we called her the old cheese box, the Delware, the Yankee, the Mosker, and the Meritana which was the ship I was board of. That same year the Merrimac and Monitor fought off 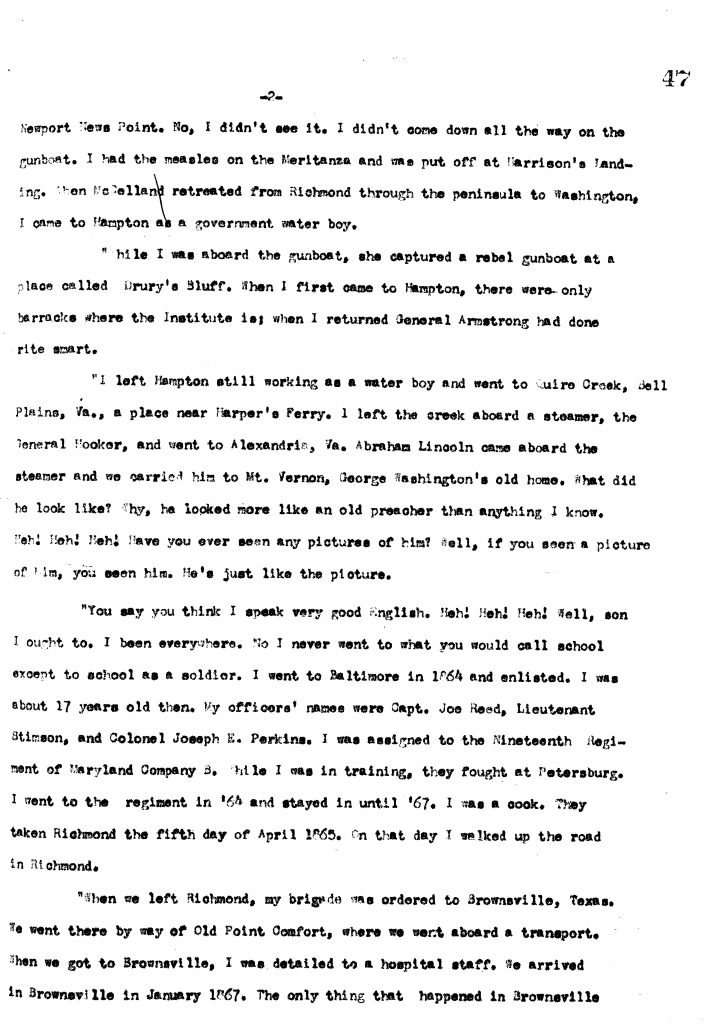 Newport News Point. No, I didn’t see it. I didn’t come down all the way on the gunboat. I had the measles on the Meritanza and was put off at Harrison’s landing. When McCellan retreated from Richmond through the peninsula to Washington, I came to Hampton as a government water boy.

“While I was aboard the gunboat, she captured a rebel gunboat at a place called Drury’s Bluff. When I first came to Hampton, there were only barracks where the Institute is; when I returned General Armstrong had done rite smart.

“I left Hampton still working as a water boy and went to Quire Creek, Bell Plains, Va., a place near Harper’s Ferry. I left the creek aboard a steamer, the General Hooker, and went to Alexandria, Va. Abraham Lincoln came aboard the steamer and we carried him to Mt. Vernon, George Washington‘s old home. What did he look like? Why, he looked more like an old preacher than anything I know. Heh! Heh! Heh! Have you ever seen any pictures of him? Well, if you seen a picture of him, you seen him. He’s just like the picture.

“You say you think I speak very good English. Heh! Heh! Heh! Well, son I ought to. I been everywhere. No I never went to what you would call school except to school as a soldier. I went to Baltimore in 1864 and enlisted. I was about 17 years old then. My officers’ names were Capt. Joe Reed, Lieutenant Stimson, and Colonel Joseph E. Perkins. I was assigned to the Nineteenth Regiment of Maryland Company B. While I was in training, they fought at Petersburg. I went to the regiment in ’64 and stayed in until ’67. I was a cook. They taken Richmond the fifth day of April 1865. On that day I walked up the road in Richmond. 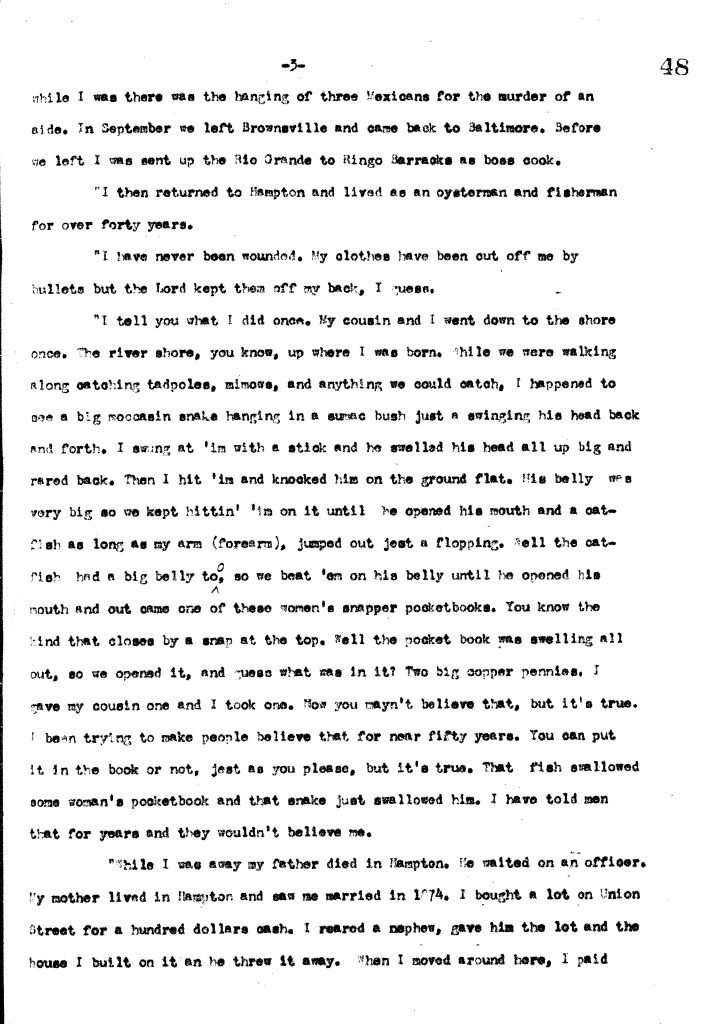 while I was there was the hanging of three Mexicans for the murder of an aide. In September we left Brownsville and came back to Baltimore. Before we left I was sent up the Rio Grande to Ringo Barracks as boss cook.

“I then returned to Hampton and lived as an oysterman and fisherman for over forty years.

“I have never been wounded. My clothes have been cut off me by bullets but the Lord kept them off my back, I guess.

“I tell you what I did once. My cousin and I went down to the shore once. The river shore, you know, up where I was born. While we were walking along catching tadpoles, mimows, and anything we could catch, I happened to see a big moccasin snake hanging in a sumac bush just a swinging his head back and forth. I swung at ‘im with a stick and he swelled his head all up big and rared back. Then I hit ‘im and knocked him on the ground flat. His belly was very big so we kept hittin’ ‘im on it until he opened his mouth and a catfish as long as my arm (forearm), jumped out jest a flopping. Well the catfish had a big belly too, so we beat ’em on his belly until he opened his mouth and out came one of these women’s snapper pocketbooks. You know the kind that closes by a snap at the top. Well the pocket book was swelling all out, so we opened it, and guess what was in it? Two big copper pennies. I gave my cousin one and I took one. Now you mayn’t believe that, but it’s true. I been trying to make people believe that for near fifty years. You can put it in the book or not, jest as you please, but it’s true. That fish swallowed some woman’s pocketbook and that snake just swallowed him. I have told men that for years and they wouldn’t believe me.

“While I was away my father died in Hampton. He waited on an officer. My mother lived in Hampton and saw me married in 1874. I bought a lot on Union Street for a hundred dollars cash. I reared a nephew, gave him the lot and the house I built on it an he threw it away. When I moved around here, I paid 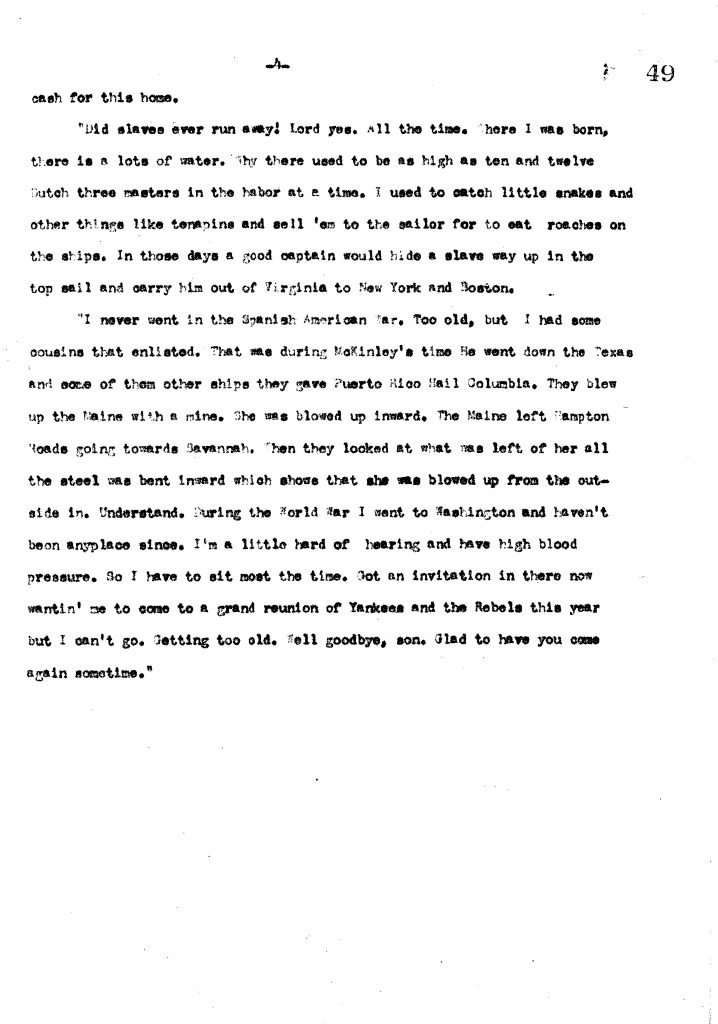 cash for this house.

“Did slaves ever run away! Lord yes. All the time. Where I was born there is a lots of water. Why there used to be as high as ten and twelve Dutch three masters in the harbor at a time. I used to catch little snakes and other things like terrapins and sell ’em to the sailor for to eat roaches on the ships. In those days a good captain would hide a slave way up in the top sail and carry him out of Virginia to New York and Boston.

“I never went in the Spanish American War. Too old, but I had some cousins that enlisted. That was during McKinley’s time He went down the Texas and some of them other ships they gave Puerto Rico Hail Columbia. They blew up the Maine with a mine. She was blowed up inward. The Maine left Hampton Roads going towards Savannah. When they looked at what was left of her all the steel was bent inward which shows that she was blowed up from the outside in. Understand. During the World War I was sent to Washington and haven’t been anyplace since. I’m a little hard of hearing and have high blood pressure. So I have to sit most the time. Got an invitation in there now wantin’ me to come to a grand reunion of Yankees and the Rebels this year but I can’t go. Getting too old. Well goodbye, son. Glad to have you come again sometime.”