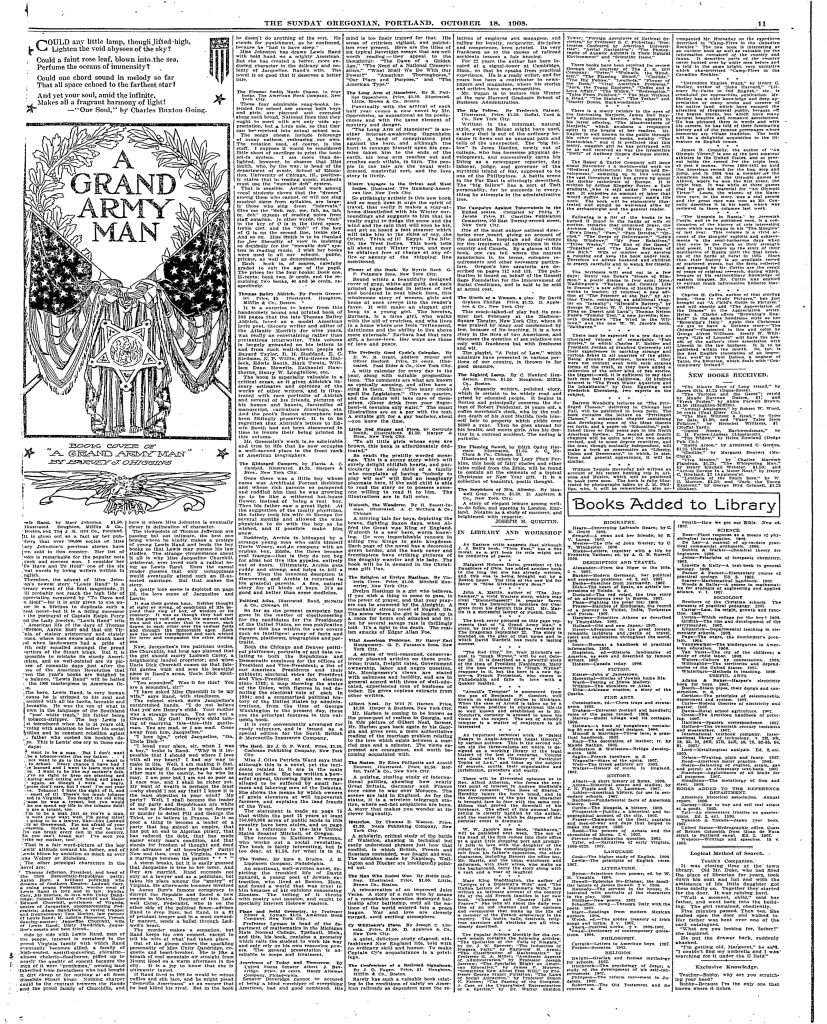 It is given out as a fact by her publishers that over 700,000 copies of miss Mary Johnston’s previous stories have been sold in this country. Her list of books is remarkable for the popular note struck and success won. I consider her “To Have and To Hold” one of the six great novels by living writers written in English.

Therefore, the advent of Miss Johnston’s newest story “Lewis Rand” is a literary event of the first magnitude. It will probably not reach the high tide of appreciation measured by “To Have and To Hold”—for it is only given to one author in a lifetime to duplicate such a great novel—but it is a fitting successor to the portrayal of Captain Ralph Percy and the Lady Jocelyn. “Lewis Rand” tells of American life of the days of Thomas Jefferson, Aaron Burr and that old Virginia of stately aristocracy and stately homes, where men swore and drank hard and when landowners had a pride of birth only equalled amongst the proud courtiers of the Stuart kings. But it is impossible to mistake its sturdy Americanism, and so well-painted are its pictures of romantic days just after the close of the American Revolution that when the year’s books are weighed in the balance, “Lewis Rand” will be hailed as the 1908 masterpiece in American fiction.

The hero, Lewis Rand, is very human because he is stripped to his soul and presented with all his faults, loveable and unloveable. He was the son of what is known in the language of the Southland as “poo’ white trash,” his father being a tobacco-stripper. The boy Lewis is first introduced when he is 14 years old, churning with ambition to better his social position and in constant rebellion against a father who curbed his bookish desires. This is Lewis’ one cry in those early days:

I want to be a man. But I don’t want to be a tobacco-roller like my father … I do not want to go to the fields. I want to go to school. Every chance I have had I have learned and I want to learn more and more. I want to be like my mother’s folk. You’ve no right to keep me planting and suckering and cutting and firing and planting again, as though I were a negro. Negroes don’t care, but I care! I’m not your slave. Tobacco! I hate the sight of it, and the smell of it! There’s too much tobacco raised in Virginia. You fought the old King because he was a tyrant, but you would make me spend my life in the tobacco field! You are a tyrant, too.

I’m to be a man just as you’re a man. You went your way; well, I’m going mine! I’m going to be a lawyer, like—like Ludwell Cary at Greenwood. I’m not afraid of your horsewhip. Strike, and be d—d to you! You can break every colt in the country, but you can’t break me! I’ve seen you strike my mother, too!

That is a fair word-picture of the boy Lewis’ attitude toward his father, and of Lewis bitten by ambition as much as ever was Wolsey or Richelieu.

The other principal characters in the novel are:

Side by side with Lewis Rand, man of the people, interest is sustained in the proud Virginia family with which Rand eventually becomes allied, a family of high-souled, nostril-quivering, chivalric—almost choleric—Southerns, piffed up to nearly the quality of conceit because the men of it were “gentlemen,” owning land inherited from forefathers who had bought it dirt cheap or for nothing at all from dissolute Stuart kings. Nothing sharper could be the contrast between the Rands and the proud family of Churchills, and here is where Miss Johnston is unusually clever in delineation of character.

The viewpoints of Thomas Jefferson are passing but not intimate, the best one being where he kindly makes a protege of young Lewis Rand and lends the boy books so that Lewis may pursue his law studies. The strange circumstance about it all is why Miss Jacqueline Churchill, aristocrat, ever loved such a radical being as Lewis Rand. Even the casual reader guesses that only unhappiness would eventually attend such an ill-assorted marriage. But that makes the story.

A pretty love scene is depicted on page 136, the love scene of Jacqueline and Lewis:

It was their golden hour. Neither thought of right or wrong, of conditions of life beyond their ring of box, of wisdom or its contrary. It was as though they had met in the great void of space, the marvel called man and the wonder that is woman, each drawn to each other over the endless fields and through the immovable ages. Each saw the other transfigured and each wished for lover and companion the other shining one.

Now, Jacqueline’s two patrician uncles, the Churchills, had long ago planned that the girl should marry Ludwell Cary, a neighboring landed proprietor; and when Uncle Dick Churchill comes up that fateful garden walk and sees his beautiful niece in Rand’s arms, Uncle Dick splutters out:

“You scoundrel. Was it for this? You are a scoundrel, sir!”

“I have asked Miss Churchill to be my wife,” says Rand, with steadiness.

The colonel struck down Jacqueline’s outstretched hands. “I do not believe that you are Henry’s child. You mother was a strange woman. You are not a Churchill. My God! Henry’s child talking of marrying this—this—this gentleman. You are mad, or I am mad. Come away from him, Jacqueline.”

“I loved your niece, sir, when I was a boy,” broke in Rand. “Why is it impossible that I should wed where I love with all my heart? I had my way to make in life. Well, I am making it fast. I am making it faster perhaps than any other man in the county, be he who he may. I am poor but I am not so poor as I once was, and I shall be richer yet. My want of wealth is perhaps the least—why should I not say that? I know it is the least objection in your mind? My party? Well, I shall become the leader of my party and Republicans are white as well as Federalists. It is not forgery or murder to detest Pitt and George the Third, or to believe in France. Is it so poor a thing to become a leader of a party that has gained an empire, that has put an end to Algerian piracy, that has reduced the debt, that has made easier every man’s condition, and that stands for freedom of thought and deed and advance of all knowledge? Party! Now and then, even in Virginia, there is a marriage between the parties * * *”

A storm breaks, but it is easily guessed that Jacqueline is true to her lover. And they are married. Rand succeeds not only as a lawyer and as a politician, but takes his place among the “gentry” of Virginia. He afterwards becomes involved in Aaron Burr’s famous conspiracy to disrupt the Republic and found a new empire in Mexico. Hearing of this, Ludwell Cary, a Federalist, who is on the other side of the political fence—advices Rand to drop Burr, but Rand, in a fit of petulant temper and in a most cowardly manner, sends a bullet through Ludwell’s heart.

The murder makes a sensation, but Rand keeps his own counsel, except to tell his wife of what had taken place.

Out of the gloom shines the sparkling personality of Miss Unity Dandridge, coquette and heart-breaker. She is like a breath of cool mountain air straight from Mount Hood on a warm afternoon in the city. It is a joy to know that she is ultimately tamed.

If Rand lived in 1908 he would be minus ruffles and silk lace, and he might plead “dementia Americana” as an excuse that he had killed his rival. But in the book he doesn’t do anything of the sort. He stands for punishment, as he confessed, because he “had to have sleep.”

Miss Johnston has drawn Lewis Rand with bold hand, as a mighty American. But she has created a better, more enduring character in the delicacy and nobility of Jacqueline, Rand’s wife. The novel is so good that it deserves a better title.