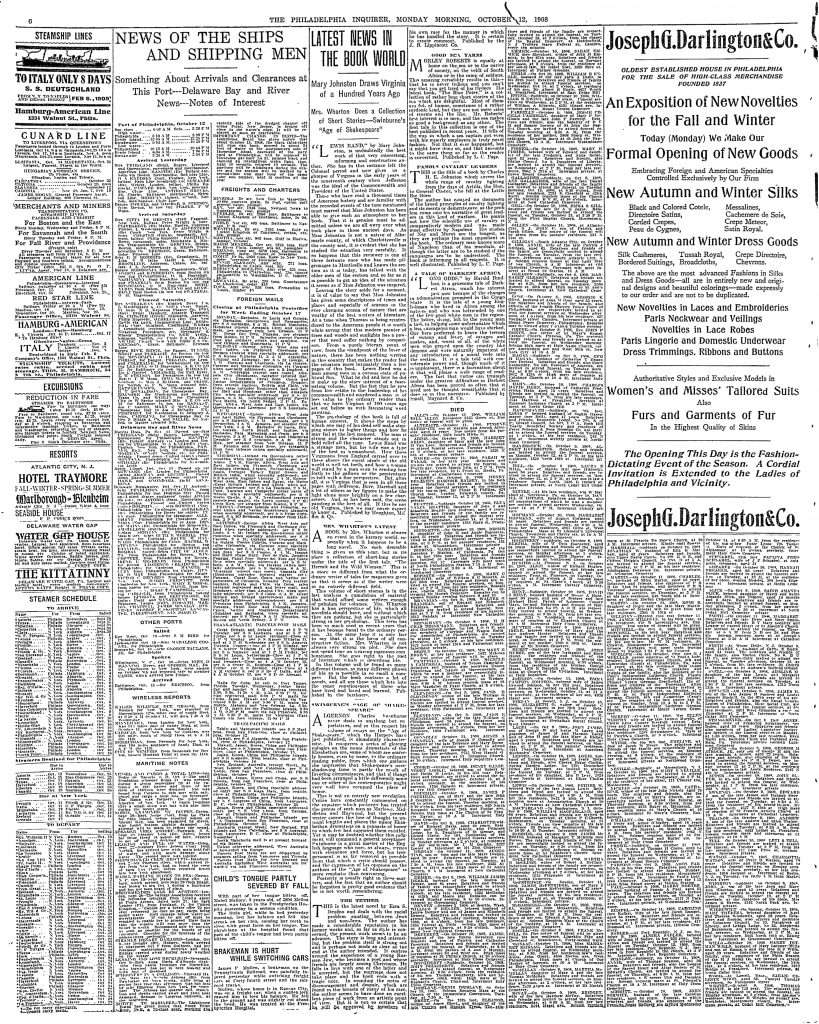 “LEWIS RAND,” by Mary Johnston, is undoubtedly the best work of that very interesting, informing and constructive author. She has in this instance left the Colonial period and now gives us a glimpse of Virginia in the early years of the nineteenth century when Jefferson was the ideal of the Commonwealth and President of the United States.

Those who have read a thousand times of American history and are familiar with the recorded events of the time mentioned must marvel that Miss Johnston has been able to give such an atmosphere to her book. That it is genuine must be admitted unless we are all awry over what took place in those ancient days. As Miss Johnston is not a native of Albemarle county, of which Charlottesville is the county seat, it is evident that she has studied the situation very carefully. It so happens that this reviewer is one of those fortunate ones who has made pilgrimages to Monticello and knows the section as it is today, has talked with the older men of the section and so far as it is possible to get an idea of the situation it seems as if Miss Johnston was inspired.

Leaving the story aside for a moment, it is of value to say that Miss Johnston has given some descriptions of times and places and especially of seasons in the ever changing arcana of nature that are worthy of the best writers of literature. At a time when Thoreau is being reintroduced to the American people it is worth while saying that this modern painter of trees and woods and sunlights has a power that need suffer nothing by comparison. From a purely literary point of view, from the standpoint of the lover of nature, there has been nothing written in this country that makes the reader feel the situation more intimately than a few pages of this book. Lewis Rand was a man among men in a curious state of political flux. What he did and how he did it make up the story interest of a fascinating volume. But the fact that he rose from low estate to the leadership of his commonwealth and murdered a man is of less value to the ordinary reader than that we have Virginia of 100 years ago set out before us with fascinating word painting.

The psychology of this book is full of human interest. It shows the steps by which one may of his dead self make stepping stones to higher things and how he may fail at the last moment. The man is strong and the character stands out in bold relief all the time. Lewis Rand was a strange man, but his wife was a type of the best in womanhood. How those Virginians from England carried over to these shores the social ideals of the old world is well set forth, and how a woman will stand by a man even to sending him forth to the gallows or the penitentiary is told with a fine perspective. But, after all, it is Virginia that is seen in all these pages with Jefferson, Burr, Marshall and a lot of others as lay figures to make the light shine more brightly on a few characters. And, as has been said, the scene painting is the best of all. If this be not old Virginia, then we may never expect to know. Published by Houghton, Mifflin & Co.