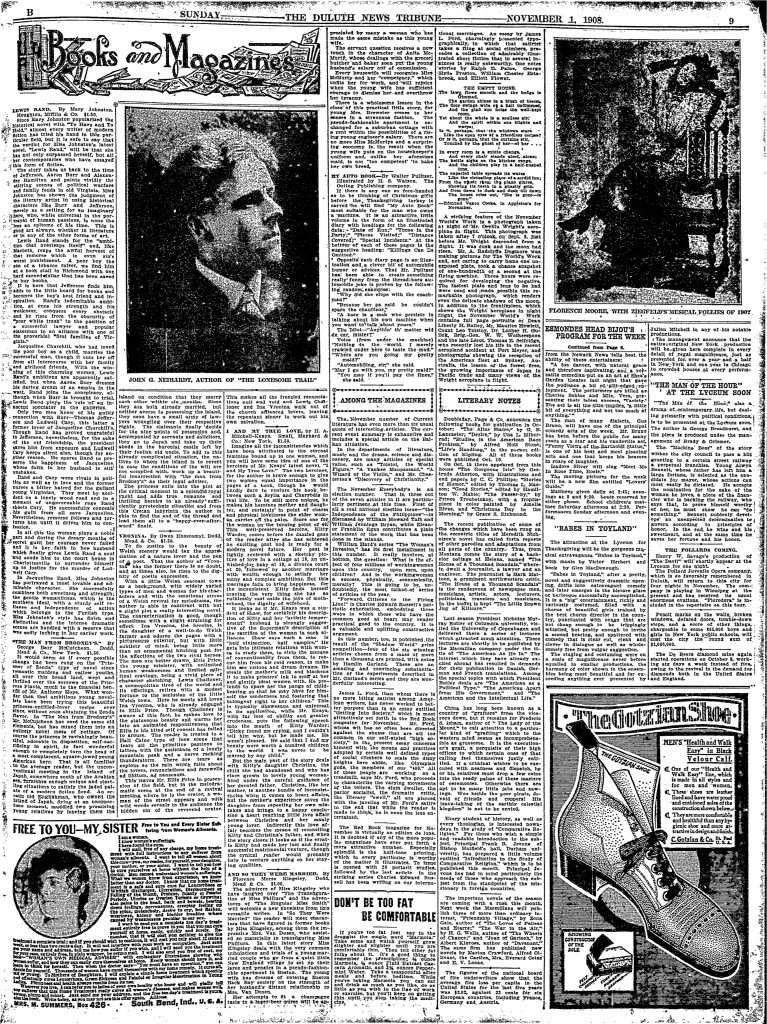 Since Mary Johnston popularized the historical novel with “To Have and To Hold,” almost every writer of modern fiction has tried his hand in this particular field, but it is safe to say that the verdict for Miss Johnston’s latest novel, “Lewis Rand,” will be that she has not only surpassed herself, but all her contemporaries who have essayed this form of fiction.

The story takes us back to the time of Jefferson, Aaron Burr and Alexander Hamilton and paints vividly the stirring scenes of political warfare and family feuds in old Virginia. Miss Johnston has shown the judgment of the literary artist in using historical characters like Burr and Jefferson, merely as a setting for an imaginary hero who, while universal in the portrayal of human passions, is none the less an epitome of his time. This is good art always, whether in literature or in any of the other forms of art.

Lewis Rand stands for the “ambition that overleaps itself” and, like Macbeth, reaps the awful harvest of that remorse which is even sin’s worst punishment. A poor boy the son of a tobacco raiser, we find him at a book stall in Richmond with one hard earned dollar that has been saved to buy books.

It is here that Jefferson finds him, adds to the little hoard for books and becomes the boy’s best friend and inspiration. Rand’s indomitable ambition, at once his strength and his weakness, conquers every obstacle and he rises from the obscurity of “poor white trash” to the position of a successful lawyer and popular statesman to an alliance with one of the proverbial “first families of Virginia.”

Jacqueline Churchill, who had loved the poor boy as a child, marries the successful man, though it cuts her off from all intercourse with her family and girlhood friends. With the winning of this charming woman, Lewis Rand’s ambitions are apparently satisfied, but when Aaron Burr dreams his daring dream of an empire in the west, Rand joins the conspiracy, although when Burr is brought to trial, Lewis Rand plays the role of an innocent spectator in the galleries.

Only two men knew of his guilty connection with Burr—Thomas Jefferson and Ludwell Cary, this latter a former lover of Jacqueline Churchill’s. Though Rand has proved ungrateful to Jefferson, nevertheless, for the sake of the old friendship, the president saves him from exposure and Ludwell Cary keeps silent also, though for another reason. He spares Rand to preserve the happiness of Jacqueline, whose faith in her husband is still unshaken.

Rand and Cary were rivals in politics as well as in love and the former nurses a bitter hatred for the gallant young Virginian. They meet by accident on a lonely wood road and in a moment of ungovernable rage Rand shoots Cary. He successfully conceals his guilt from all save Jacqueline. Nevertheless, remorse follows and tortures him until it drives him to confession.

In all this the woman plays a noble part and during the dreary months of secret guilt her courage never failed and it is her faith in her husband which finally gives Lewis Rand a soul and sends him to the court house in Charlottesville to surrender himself up to justice for the murder of Ludwell Cary.

In Jacqueline Rand, Miss Johnston has portrayed a most lovable and admirable character. She successfully combines both sweetness and strength; the gentle womanliness, which is the southern ideal, with a sturdy self reliance and independence of action which belongs to the Puritan type. Miss Johnston’s style has finish and distinction and the intense dramatic scenes are handled with a reserve that was sadly lacking in her earlier work.