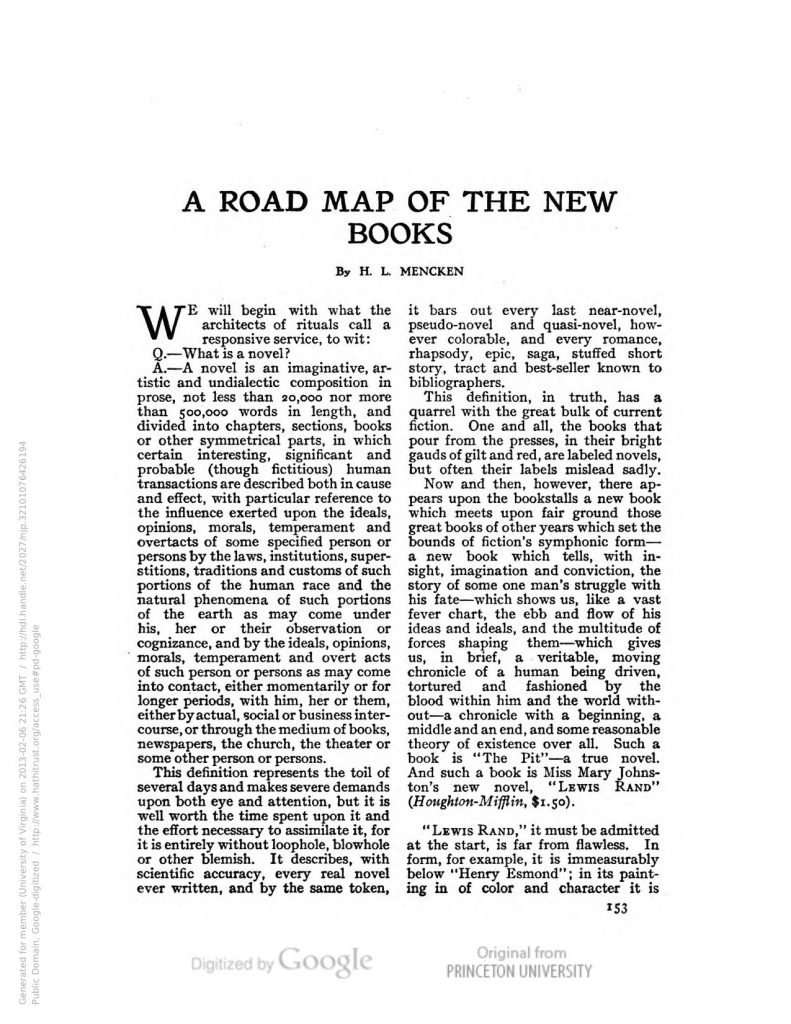 We will begin with what the architects of rituals call a responsive service, to wit:

A.—A novel is an imaginative, artistic and undialectic composition in prose, not less that 20,00 nor more than 500,000 words in length, and divided into chapters, sections, books or other symmetrical parts, in which certain interesting, significant and probable (though fictitious) human transactions are described both in cause and effect, with particular reference to the influence exerted upon the ideals, opinions, morals, temperament and overt acts of some specified person or persons by the laws, institutions, superstitions, traditions and customs of such portions of the human race and the natural phenomena of such portions of the earth as may come under his, her or their observation or cognizance, and by the ideals, opinions, morals, temperament and overt acts of such person or persons as may come into contact, either momentarily or for longer periods, with him, her or them, either by actual, social or business intercourse, or through the medium of books, newspapers, the church, the theater or some other person or persons.

The definition represents the toil of several days and makes severe demands upon both eye and attention, but it is well worth the time spent upon it and the effort necessary to assimilate it, for it is entirely without loophole, blowhole or other blemish. It describes, with scientific accuracy, ever real novel ever written, and by the same token, it bars out every last near-novel, pseudo-novel and quasi-novel, however colorable, and every romance, rhapsody, epic, saga, stuffed short story, tract and best-seller known to bibliographers.

This definition, in truth, has a quarrel with the great bulk of current fiction. One and all, the books that pour from the presses, in their bright gauds of gilt and red, are labeled novels, but often their labels mislead sadly.

Now and then, however, there appears upon the bookstalls a new book which meets upon fair ground those great books of other years which set the bounds of fiction’s symphonic form—a new book which tells, with insight, imagination and conviction, the story of some one man’s struggle with his fate—which shows us, like a vast fever chart, the ebb and flow of his ideas and ideals, and the multitude of forces shaping them—which gives us, in brief, a veritable, moving chronicle of a human being driven, tortured and fashioned by the blood within him and the world without—a chronicle with a beginning, a middle and an end, and some reasonable theory of existence over all. Such a book is “The Pit”—a true novel. And such a book is Miss Mary Johnston’s new novel, “Lewis Rand” (Houghton-Mifflin, $1.50).

“Lewis Rand,” it must be admitted at the start, is far from flawless. In form, for example, it is immeasurably below “Henry Esmond”; in its painting in of color and character it is 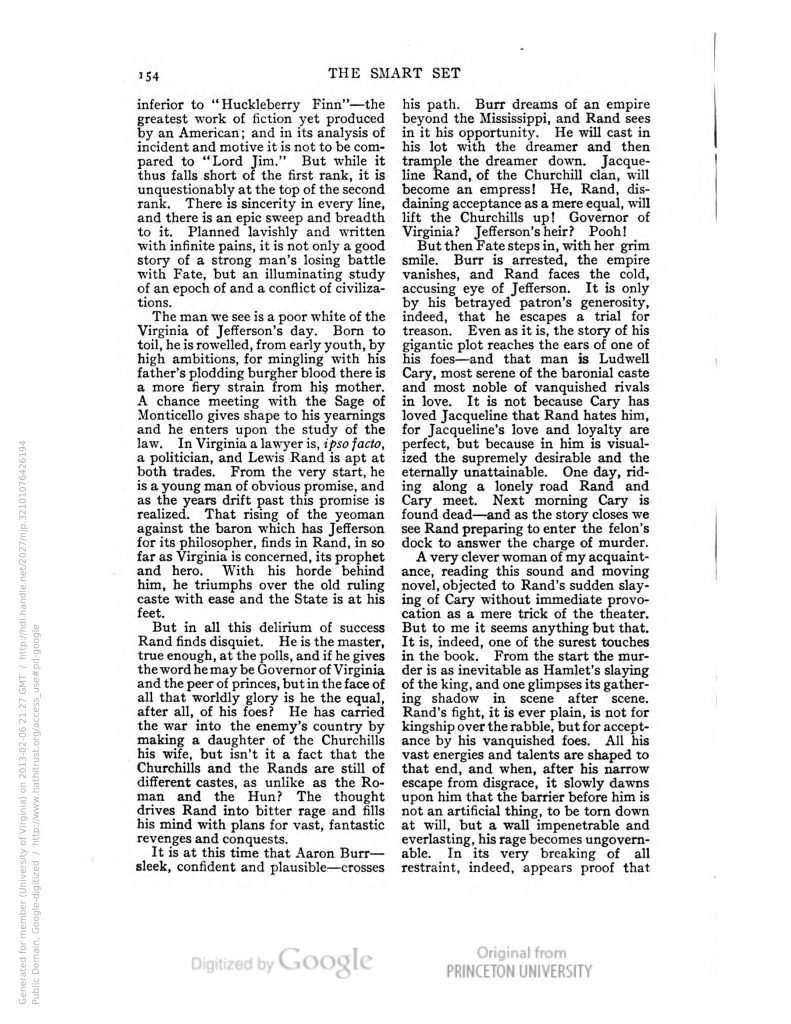 inferior to “Huckleberry Finn”—the greatest work of fiction yet produced by an American; and in its analysis of incident and motive it is not to be compared to “Lord Jim.” But while it thus falls short of the first rank, it is unquestionably at the top of the second rank. There is sincerity in every line, and there is an epic sweep and breadth to it. Planned lavishly and written with infinite pain, it is not only a good story of a strong man’s losing battle with Fate, but an illuminating study of an epoch and a conflict of civilizations.

The man we see is a poor white of the Virginia of Jefferson‘s day. Born to toil, he is rowelled, from early youth, by high ambitions, for mingling with his father’s plodding burgher blood there is a more fiery strain from his mother. A chance meeting with the Sage of Monticello gives shape to his yearnings and he enters upon the study of the law. In Virginia a lawyer is, ipso facto, a politician, and Lewis Rand is apt at both trades. From the very start, he is a young man of obvious promise, and as the years drift past this promise is realized. That rising of the yeoman against the baron which has Jefferson for its philosopher, finds in Rand, in so far as Virginia is concerned, its prophet and hero. With his horde behind him, he triumphs over the old ruling caste with ease and the State is at his feet.

But in all this delirium of success Rand finds disquiet. He is the master, true enough, at the polls, and if he gives the word he may be Governor of Virginia and the peer of princes, but in the face of all that worldly glory is he the equal, after all, of his foes? He has carried the war into the enemy’s country by making a daughter of the Churchills his wife, but isn’t it a fact that the Churchills and the Rands are still of different castes, as unlike as the Roman and the Hun? The thought drives Rand into bitter rage and fills his mind with plans for vast, fantastic revenges and conquests.

It is at this time that Aaron Burr—sleek, confident and plausible—crosses his path. Burr dreams of an empire beyond the Mississippi, and Rand sees in it his opportunity. He will cast in his lot with the dreamer and then trample the dreamer down. Jacqueline Rand, of the Churchill clan, will become an empress! He, Rand, disdaining acceptances as a mere equal, will lift the Churchills up! Governor of Virginia? Jefferson’s heir? Pooh!

But then Fate steps in, with her grim smile. Burr is arrested, the empire vanishes, and Rand faces the cold, accusing eye of Jefferson. It is only by his betrayed patron’s generosity, indeed, that he escapes a trial for treason. Even as it is, the story of his gigantic plot reaches the ears of one of his foes—and that man is Ludwell Cary, most serene of the baronial caste and most noble of vanquished rivals in love. It is not because Cary has loved Jacqueline that Rand hates him, for Jacqueline’s love and loyalty are perfect, but because in him is visualized the supremely desirable and the eternally unattainable. One day, riding along a lonely road, Rand and Cary meet. Next morning Cary is found dead—and as the story closes we see Rand preparing to enter the felon’s dock to answer the charge of murder.

A very clever woman of my acquaintance, reading this sound and moving novel, objected to Rand’s sudden slaying of Cary without immediate provocation as a mere trick of the theater. But to me it seems anything but that. It is, indeed, one of the surest touches in the book. From the start the murder is as inevitable as Hamlet’s slaying of the king, and one glimpses its gathering shadow in scene after scene. Rand’s fight, it is ever plain, is not for kingship over the rabble, but for acceptance by his vanquished foes. All his vast energies and talents are shaped to that end, and when, after his narrow escape from disgrace, it slowly dawns upon him that the barrier before him is not an artificial thing, to be torn down at will, but a wall impenetrable and everlasting, his rage becomes ungovernable. In its very breaking of all restraint, indeed, appears proof that 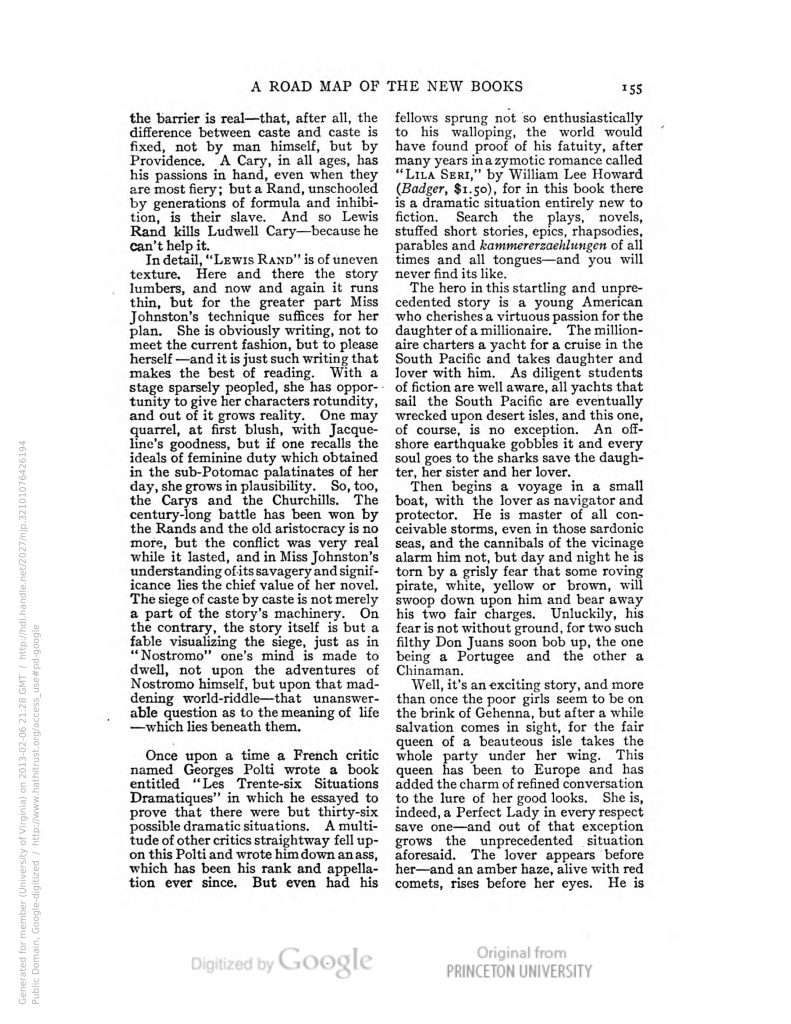 the barrier is real—that, after all, the difference between caste and caste is fixed, not by man himself, but by Providence. A Cary, in all ages, has his passions in hand, even when they are most fiery; but a Rand, unschooled by generations of formula and inhibition, is their slave. And so Lewis Rand kills Ludwell Cary—because he can’t help it.

In detail, “Lewis Rand” is of uneven texture. Here and there the story lumbers, and now and again it runs thin, but for the greater part Miss Johnston’s technique suffices for her plan. She is obviously writing, not to meet the current fashion, but to please herself—and it is just such writing that makes the best reading. With a stage sparsely peopled, she has the opportunity to give her characters rotundity, and out of it grows reality. One may quarrel, at first blush, with Jacqueline’s goodness, but if one recalls the ideals of feminine duty which obtained in the sub-Potomac palatinates of her day, she grows in plausibility. So, too, the Carys and the Churchills. The century-long battle has been won by the Rands and the old aristocracy is no more, but the conflict was very real while it lasted, and in Miss Johnston’s understanding of its savagery and significance lies the chief value of her novel. The siege of caste by caste is not merely a part of the story’s machinery. On the contrary, the story itself is but a fable visualizing the siege, just as in “Nostromo” one’s mind is made to dwell, not upon the adventures of Nostromo himself, but upon that maddening world-riddle—that unanswerable question as to the meaning of life—which lies beneath them.