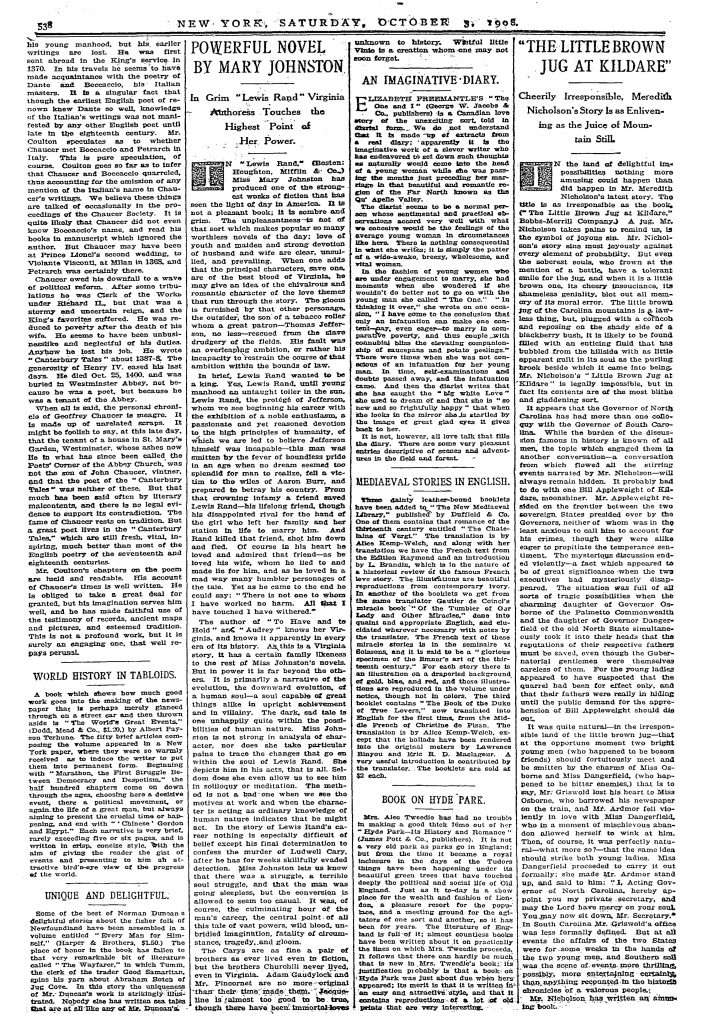 In “Lewis Rand,” (Boston: Houghton, Mifflin & Co.) Miss Mary Johnston has produced one of the strongest works of fiction that has seen the light of day in America. It is not a pleasant book; it is sombre and grim. The unpleasantness is not of that sort which makes popular so many worthless novels of the day: love of youth and maiden and strong devotion of husband and wife are clear, unsullied, and prevailing. When one adds that the principal characters, save one, are of the best blood of Virginia, he may give an idea of the chivalrous and romantic character of the love themes that run through the story. The gloom is furnished by that other personage, the outsider, the son of a tobacco roller whom a great patron—Thomas Jefferson, no less—rescued from the slave drudgery of the fields. His fault was an overleaping ambition, or rather his incapacity to restrain the course of that ambition within the bounds of law.

In brief, Lewis Rand wanted to be a king. Yes, Lewis Rand, until young manhood an untaught toiler in the sun, Lewis Rand, the protégé of Jefferson, whom we see beginning his career with the exhibition of a noble enthusiasm, a passionate and yet reasoned devotion to the high principles of humanity, of which we are led to believe Jefferson himself was incapable—this man was smitten by the fever of boundless pride in an age when no dream seemed too splendid for man to realize, fell a victim to the wiles of Aaron Burr, and prepared to betray his country. From that crowning infamy a friend saved Lewis Rand—his lifelong friend, though his disappointed rival for the hand of the girl who left her family and her station in life to marry him. And Rand killed that friend, shot him down and fled. Of course in his heart and loved and admired that friend—as he loved his wife, whom he lied to and made lie for him, and as he loved in a mad way many humbler personages of the tale. Yet as he came to the end he could say: “There is not one to whom I have worked no harm. All that I have touched I have withered.”

The author of “To Have and to Hold” and “Audrey” knows her Virginia, and knows it apparently in every era of its history. As this is a Virginia story, it has a certain family likeness to the rest of Miss Johnston’s novels. But in power it is far beyond the others. It is primarily a narrative of the evolution, the downward evolution, of a human soul—a soul capable of great things alike in upright achievement and in villainy. The dark, sad tale is one unhappily quite within the possibilities of human nature. Miss Johnston is not strong in analysis of character, nor does she take particular pains to trace the changes that go on within the soul of Lewis Rand. She depicts him in his acts, that is all. Seldom does she even allow us to see him in soliloquy or meditation. The method is not a bad one when we see the motives at work and when the character is acting as ordinary knowledge of human nature indicates that he might act. In the story of Lewis Rand’s career nothing is especially difficult of belief except his final determination to confess the murder of Ludwell Cary, after he has for weeks skillfully evaded detection. Miss Johnston lets us know that there was a struggle, and that the man was going sleepless, but the conversion is allowed to seem too casual. It was, of course, the culminating hour of the man’s career, the central point of all this tale of vast powers, wild blood, unbridled imagination, fatality of circumstance, tragedy, and gloom.

The Carys are as fine a pair of brothers as ever lived even in fiction, but the brothers Churchill never lived, even in Virginia. Adam Gaudylock and Mr. Pincornet are no more original than their time made them. Jacqualine is almost too good to be true, though there have been immortal loves unknown to history. Wistful little Vinie is a creation whom one may not soon forget.