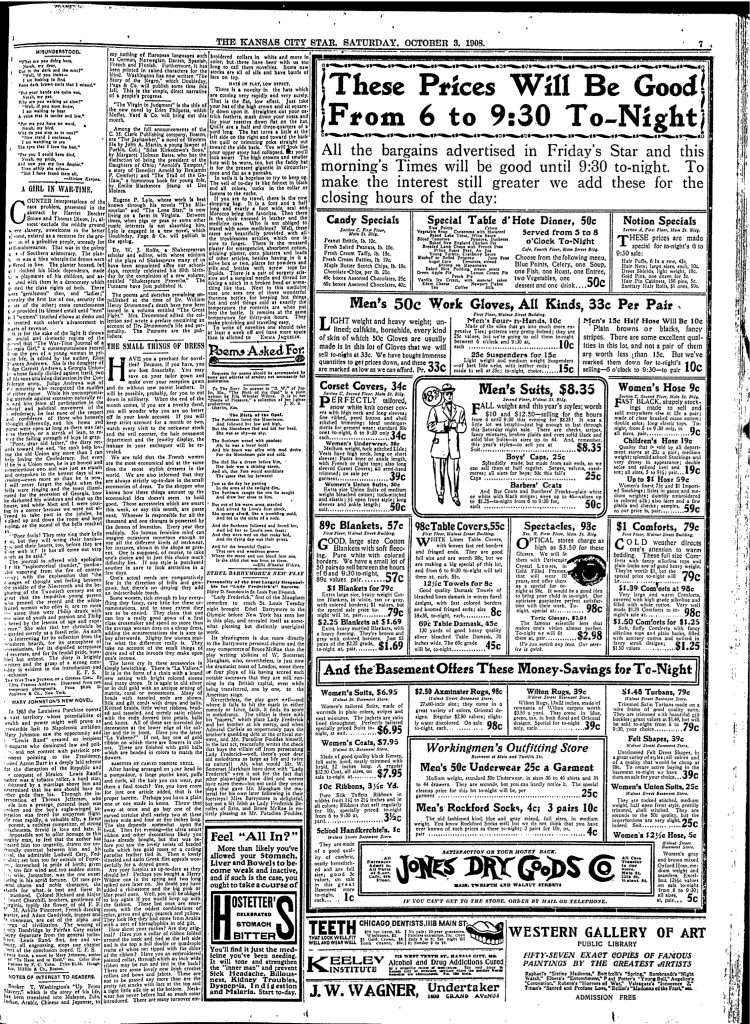 In 1803 the Louisiana Purchase opened a vast territory whose potentialities of wealth and power might well prove an irresistible bait to Napoleonic ambition. Mary Johnston saw the opportunity and in “Lewis Rand” created an incipient Bonaparte who dominated law and politics, and not content with patriotic pre-[garbled] pointing to the Presidency, joined Aaron Burr in a deeply laid scheme for the disruption of the Republic and the conquest of Mexico. Lewis Rand’s father was a tobacco roller, a hard man, embittered by a marriage above him and determined that his son should have no other gods than his. Through the intervention of Thomas Jefferson, who made him a protege, parental leash was broken and the boy’s eagle-winged aspiration was freed for empyrean flight. He rose rapidly, a valuable ally, a fierce opponent, a ruthless competitor, of strong attachments, fervid in love and hate. It is impossible not to offer homage to this mighty man, to feel that the author has treated him too ungently, drawn too unfriendly contrast between him and his rival, the admirable Ludwell Cary, Federalist; set him too far outside of Fontenoy, intrenched in pride of birth; given him too fair wind and too sudden storm. His wife, Jacqueline, was the one sweet spring in his acrid fortune. Of rare personal charm and noble character, she stands for what is best and finest in womanhood. Colonel Richard and Major Edward Churchill, brothers, gentlemen of Virginia, typify the flower of old F. F. V. M. Achille Pincornet, French dancing master, and Adam Gaudylock, trapper and frontiersman, are out of the alpha and omega of civilization. The wooing of Unity Dandridge by Fairfax Cary makes happy departure from the general turbulence. Lewis Rand, flint, fire and velocity, all engrossing, stops one chapter short of the conclusion hoped. E. F. S.