Typical of serials, To Have and to Hold is a novel rich in incident. Its fictional hero, Captain Ralph Percy, is one of the original settlers at Jamestown and a survivor of the Starving Time. His cousin, George Percy, led the colony during that deadly winter of 1609–1610, but bears scant mention in the novel. Instead, the action opens several years later, in 1621, when a shipload of women has arrived in the colony, available to be purchased as wives for 120 pounds of tobacco. On the suggestion of his friend John Rolfe, Percy decides to purchase a “maid.” After saving a woman from harassing suitors, he discovers she is not, in fact, the penniless Puritan she had claimed to be. He marries her anyway, and soon learns more: she is Lady Jocelyn Leigh, ward of the king and the promised bride of Lord Carnal. Rather than marry him, she has fled to Virginia.

Johnston, writing from Percy’s point of view, portrays Jocelyn in epic terms: “As I gazed with all my eyes, I found more than grace and beauty in that wonderful face,—found pride, wit, fire, determination, finally shame and anger.” Lord Carnal, as his name unsubtly suggests, represents a threatening and dishonorable sexuality: “The bravado with which he spoke, the insolence of his bold glance and curled lip, the arrogance with which he flaunted that King’s favor which should be a brand more infamous than the hangman’s, his beauty, the pomp of his dress,—all were alike hateful.”

Percy and Lord Carnal agree to duel to the death, but are stopped by order of the deputy governor, George Yeardley, who has sought advice from the Virginia Company of London on whether the “king’s favorite” has the right to summarily remove two colonists. Weeks later, after Lord Carnal attempts to poison his rival and Percy narrowly thwarts an attack by the Paspahegh Indians, word arrives that Lord Carnal is in the right. Percy flees, along with his trusty mate, the minister Jeremy Sparrow; Lady Jocelyn; his former indentured servant, Diccon; and Lord Carnal, whom they have taken prisoner.

In an unlikely twist, and only after surviving a shipwreck, the group joins a band of pirates, and Percy becomes their captain. They raid Spanish shipping in the Caribbean until they are captured by a Virginia Company ship. A trial at sea convinces the Englishmen of Percy’s virtue, but when they return to Jamestown, Percy is tricked and captured again by Lord Carnal, who this time has sought allies among the Paspaheghs. Percy has long fought the Indians and finds them, and their paramount chief, Opechancanough, to be deceitful in their dealings with the English. When Sparrow describes Opechancanough’s features as being “of a nobler cast,” Percy replies: “And his heart is of a darker … It is a strange and subtle savage.”

Sparrow argues that the Indians are sincere, that they do not, as Percy insists, wear a “mask.” “Believe it or not, it is so,” Percy warns his friend. “That dark, cold, still face is a mask, and that simple-seeming amazement at horses and armor, guns and blue beads, is a mask. It is in my mind that some fair day, the mask will be dropped.”

In a flourish of action, Percy, with the help of Pocahontas‘s brother Nantauquas and his pet panther, escapes the clutches of Lord Carnal. Percy then meets Opechancanough, who promises fidelity but secretly plans violence. Even Nantauquas turns on the Englishmen, telling Percy, “This is the red man’s land … When you first came we thought you were gods; but you have not done like the great white God who, you say, loves you so. You are wiser and stronger than we, but your strength and wisdom help us not: they press us down from men to children; they are weights upon the head and shoulders of a babe to keep him under stature.”

Percy is able to warn the colonists at Jamestown in time to repel Opechancanough’s attack, and he eventually reunites with Jocelyn, who proclaims, “My head may lie upon thy breast, but my heart lies at thy feet.”

In a review of To Have and to Hold that ran in its April 1900 issue, the Virginia Magazine of History and Biography praised Johnston’s command of her subject matter: “There are chapters in her book which would form admirable school reading for classes in Virginia history.” Indeed, Johnston’s novel, as with her debut, Prisoners of Hope (1898), suggests a deep reading of the colony’s early history.

In addition to Rolfe and Opechancanough, many historical figures, not all of them well known, are referenced by the novel: Sir Edwin Sandys, treasurer of the Virginia Company; his brother, George Sandys; John Pory, the colony’s secretary; William Peirce (spelled Pierce in Johnston’s book), who met the first ships containing Africans in 1619; Governor Sir Francis Wyatt; Sir Thomas Dale, whose strict Lawes Divine Morall and Martiall (1612) are fondly recalled by Percy; the “fierce, unscrupulous” Samuel Argall; John Smith, who “ever held the savages … in a most deep distrust”; Pocahontas, with “her wistful eyes and braided hair and finger on her lips”; and her father, the “wise” Powhatan, embittered by being made to kneel by Englishmen.

Women did arrive by the boatload in Virginia—the Virginia Company sent ninety in 1620 and fifty-seven in 1621—and were sold as wives for 120 pounds of tobacco, or six times the cost of a male indentured servant. After marriage, they most often worked in the fields alongside their husbands, white and black indentured servants, and slaves. In the novel, Percy owns an enslaved woman named Angela, and, indeed, the colony’s 1624 muster lists a woman named Angelo (sometimes Angela) belonging to William Peirce. She was said to have arrived with the first Africans in 1619. Johnston portrays her as speaking in a soft “half English, half Spanish,” a nod, perhaps, to the fact that many of these first African slaves were Christians who had at least partially assimilated to European culture.

Johnston’s account of early Jamestown overplays the period’s romance and underplays the colonists’ sheer struggle to survive. (Between 1619 and 1621, 3,000 of the 4,270 English colonists died, mostly of disease. Only 347 died in Opechancanough’s attack.) And while the author pays attention to the details of Virginia Indian culture—for instance, referencing the god Okee, who “brooded over this place, and he might be angry”—she nevertheless stereotypes the Indians as deceitful and barbarous. Her characterization of Opechancanough takes its tone from Edward Waterhouse’s official report of the 1622 attack, which describes the Indian leader and his warriors as “treacherous,” “divellish,” and “perfidious and inhumane.”A brief mention of the baptized Indian Chanco, or Chauco, who warned the Jamestown settlers of Opechancanough’s attack, implies that, from the novel’s point of view, Indians can only be trusted once they have accepted Christianity.

For these reasons, many historians in the twenty-first century might find troubling the claim, made in a biographical sketch of Johnston published in 1942, that “a whole generation formed its picture of the early days in Virginia” from To Have and to Hold.

Upon its release in March 1900, Johnston’s novel was praised by critics and the reading public alike. The Atlantic Monthly had published the adventures of Ralph Percy and Lady Jocelyn as a serial from June 1899 until March 1900, to much excitement; the book sold 111,000 copies during its first three weeks in stores. The New York Times wrote that the novel “justifies the most favorable expectation,” especially in Johnston’s “repeated choice of the better part of fiction, that of describing real men and women, not puppets.” The Times also noted the tale’s “wonderful pirate episode.” The Virginia Magazine of History and Biography called To Have and to Hold “the most stirring and interesting Virginia historical novel ever written,” but complained, “the buccaneer episode is out of place and rather disfigures the book.”

The Chicago Tribune wrote that the purchase of wives “is scarcely a theme for idyllic treatment, yet Miss Johnston has made these opening incidents of her story both delightfully human and irresistibly interesting.” While complimenting the author’s “grace of style,” the Tribune noted that Johnston “has little humor and she has not yet learned the novelist’s power of concentrating different lines of action upon a dramatic climax.”

Few twenty-first-century critics study Johnston’s writing; among those who do, C. Ronald Cella finds that To Have and to Hold is not among her best novels. In contrast to the New York Times, he argues that her characters are puppets, “the typical idealizations of the Romance of Adventure, but without the depth of analysis or complexity of romance at its best.” In fact, he notes that Johnston referred to them in her private writing as “puppets,” explaining that in To Have and to Hold she prioritized the evocation of time and place more than character development. And while Johnston does not tackle difficult moral or political issues, Cella writes that that the novel’s many and often-improbable incidents cohere around “the larger issue of the survival of the colony.”

Regardless of its merits as literature, To Have and to Hold was a popular sensation. The poet Wallace Stevens admitted in a letter to his future wife of staying up to read the book “until half-past three in the morning.” Journalists and readers debated the locations of sites associated with the book. Fawning profiles appeared in the Times and the Washington Post, although Johnston, who was shy, refused to speak on the record to reporters. In June 1900, the Post published a note on how the book, after just six months, had become ensconced in the popular culture. Its title, for instance, was regularly referenced by cartoonists and advertising copywriters. According to the paper, “It is related that a child entered the Providence Library a few days ago and asked for a book for her mother, preferably ‘that novel of Mary Johnston’s called ‘To Get and to Keep.'” 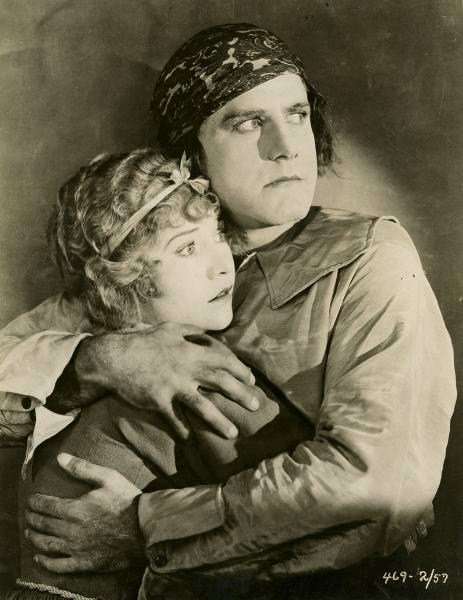 Publicity Still from To Have and to Hold

The New York Times printed a letter, also in June, suggesting an unseemly similarity between To Have and to Hold and another historical romance of Virginia, The Head of a Hundred (1897) by Maud Wilder Goodwin; in a letter to her publisher, Johnston denied she had borrowed her plot from Goodwin. In 1901, E. F. Boddington adapted Johnston’s novel into a poorly received play of the same name, directed by Charles Frohman. Two silent films followed: one released in 1916, starring Wallace Reid and Mae Murray, and directed by George Melford; and one released in 1922, starring Bert Lytell and Betty Compson, and directed by George Fitzmaurice. A third film version, shot in Virginia and the Cayman Islands, was produced in 2012 but never released.

Johnston, meanwhile, earned nearly $50,000 in sales of To Have and to Hold during its first year of publication and more than $70,000 total. She used these profits to fund her writing career, building an estate in Bath County and writing twenty-one more novels. Although several of them, even according to modern-day critics, were quite good, none approached the success of To Have and to Hold.