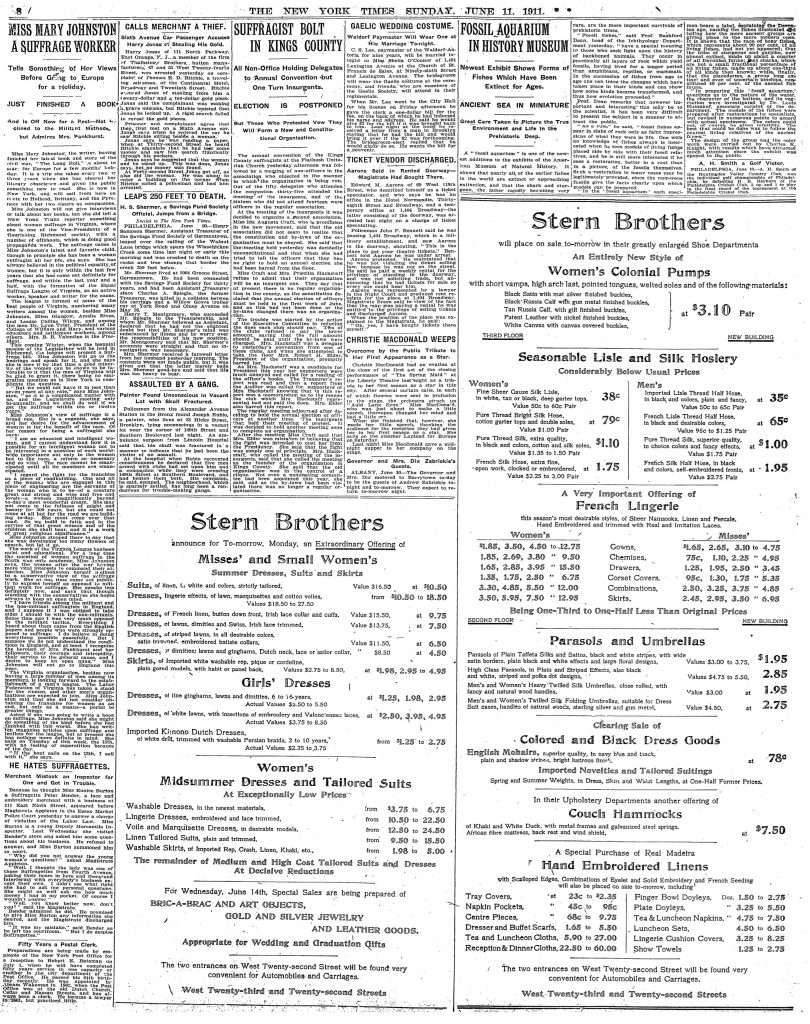 Miss Mary Johnston: A Suffrage Worker
Tells Something of Her Views Before Going to Europe for a Holiday
Just Finished a Book
And Is Off Now for a Rest—Not Inclined to the Militant Methods, but Admires Mrs. Pankhurst.

Miss Mary Johnston, the writer, having finished her latest book, “The Long Roll,” is about to start for Europe for a few months’ holiday. It is a trip she takes every two or three years when she has cleared her literary conscience and given the public something new to read. She is now in New York, and will sail from here en route to Holland, Brittany, and the Pyrenees with her two sisters as companions.

Miss Johnston will not give interviews or talk about her books, but she did tell a New York Times reporter something about woman suffrage in Virginia, where she is one of the Vice-Presidents of a flourishing Richmond society, with a good number of offshoots, which is doing good propaganda work. The suffrage cause is Miss Johnston’s latest and favorite child, though in principle she has been a woman suffragist all her life, she says. She has always believed in the political equality of women, but it is only within the last few years that she has come out definitely for suffrage, and within the last year and a half, with the formation of the Equal Suffrage League of Virginia, as an active worker, speaker and writer for the cause.

The league is formed of some of the best people of Virginia, numbering many writers among the women, besides Miss Johnston, Ellen Glasgow, Amelie Rives, and Louise Collins Wilcox, and among the men Dr. Lyon Tyler, President of the College of William and Mary, and various educators and settlement workers, among others. Mrs. B. B. Valentine is the President.

This coming Winter, when the biennial session of the Legislature will be held in Richmond, the league will present a Suffrage bill. Miss Johnston will go to the hearings and speak for it, and she says she is sure if by that time a good minority of women can be shown to be favorable to it that the men of Virginia will be glad to grant it, there being no emigration question as in New York to complicate the question.

“But we could not have it in less than seven years at any rate,” says Miss Johnston, “as it is a complicated matter with us, and the Legislature meeting only bi-annually, and we shall do well if we get the suffrage within ten or twelve years.”

Miss Johnston’s view of suffrage is a broad one. She is a eugenist, she says, and her desire for the advancement of women is for the benefit of the race. Of her reason for begin a suffragist she says:

“I am an educated and intelligent woman, and I cannot understand how it is possible for an intelligent woman not to be interested in a question of such worldwide importance not only to the women but to the race, a reform so necessary and so vital. The race cannot be emancipated until all its members are emancipated.

“I regard the fight for the franchise as a piece of roadbuilding. One and all of the women who are engaged in this piece of engineering are the servants of the woman who is to be—of a creature great and strong and wise and free and lovely—a woman magnificently beyond to-day’s most wonderful dream. She may not come in the fullness of might and beauty for 500 years, but she could not come at all but for the road we are building to-day. She must come over that road. So we build in faith and in the service of that great woman and of the children she shall bear, and it is a work of great religious significance.”

Miss Johnston stopped there to say that she was developing too many flowers of speech, but let it go.

The work of the Virginia League has been quiet and educational. For a long time the question of woman suffrage in the South was only academic, Miss Johnston says, the women after the war having more vital interests to command their attention. Miss Johnston herself inclines to a conservative view of the suffrage work. She at one time came out publicly to express herself as opposed to militant work for suffrage. She speaks less definitely now, and says that though standing with the conservatives she hopes always to keep an open mind.

“I have friends among the militant and the non-militant suffragists in England, and I suppose if I was obliged to take sides I should be with the non-militants. Some time ago I was very much opposed to the militant tactics. Everything I heard about them came from the English papers and people who were strongly opposed to suffrage. I do believe in doing everything possible peacefully. But I suppose we do not understand the conditions in England, and at least I recognize the heroism of Mrs. Pankhurst and her followers, their courage and intrepidity, their service to the general cause, and I desire to keep an open mind.” Miss Johnston will not go to England this year.

The Virginia organization, besides now having a large number of men among its members, is looking forward to the establishment of a men’s league. The Labor Federation of Virginia has taken a stand for the women, and other men’s organizations are expected to join. Miss Johnston said that she did not consider obtaining the franchise for women as an end, but only as a means—a portal to greater things.

Asked if she was going to write a book on suffrage, Miss Johnston said she might do something of the kind before she had finished with this world. She has written magazine articles upon suffrage and leaflets for the league, but at present she has nothing more definite in mind. She sails on Tuesday of this week, the 13th, with no feeling of superstition because of the day.