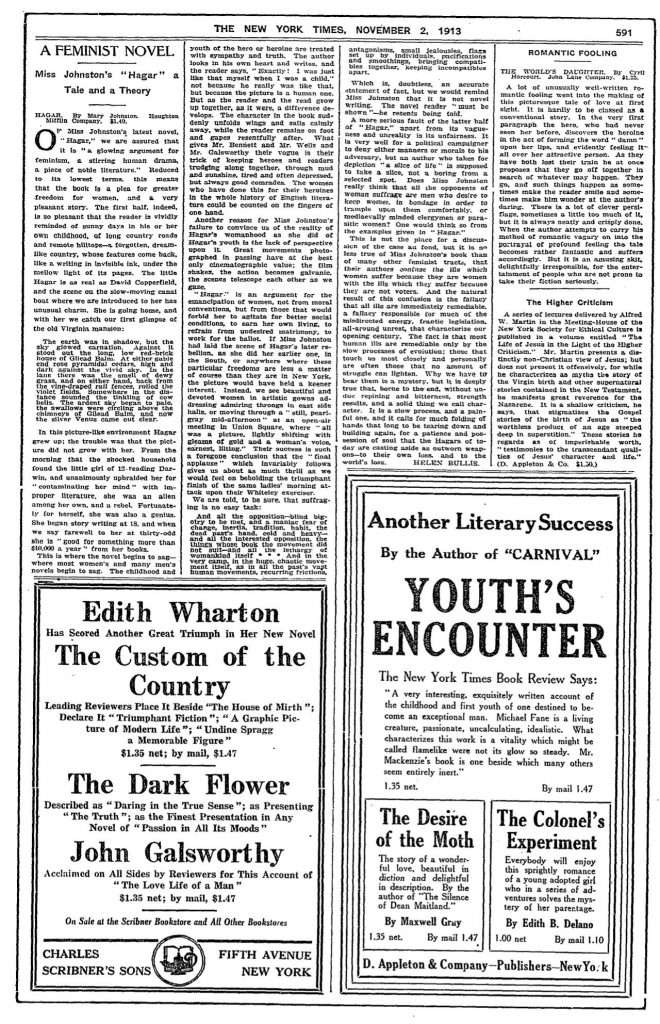 Of Miss Johnston’s latest novel, “Hagar,” we are assured that it is “a glowing argument for feminism, a stirring human drama, a piece of noble literature.” Reduced to its lowest terms, this means that the book is a plea for greater freedom for women, and a very pleasant story. The first half, indeed, is so pleasant that the reader is vividly reminded of sunny days in his or her own childhood, of long country roads and remote hilltops—a forgotten, dreamlike country, whose features come back, like a writing in invisible ink, under the mellow light of its pages. The little Hagar is as real as David Copperfield, and the scene on the slow-moving canal boat where we are introduced to her has unusual charm. She is going home, and with her we catch our first glimpse of the old Virginia mansion:

The earth was in shadow, but the sky glowed carnation. Against it stood out the long, low red-brick house of Gilead Balm. At either gable end rose pyramidal cedars, high and dark against the vivid sky. In the lane there was the smell of dewy grass, and on either hand, back from the vine-draped rail fences, rolled the violet fields. Somewhere in the distance sounded the tinkling of cow bells. The ardent sky began to pale, the swallows were circling above the chimneys of Gilead Balm, and now the silver Venus came out clear.

In this picture-like environment Hagar grew up; the trouble was that the picture did not grow with her. From the morning that the shocked household found the little girl of 12 reading Darwin, and unanimously upbraided her for “contaminating her mind” with improper literature, she was an alien among her own, and a rebel. Fortunately for herself, she was also a genius. She began story writing at 13, and when we say farewell to her at thirty-odd she is “good for something more than $10,000 a year” from her books.

This is where the novel begins to sag—where most women’s and many men’s novels begin to sag. The childhood and youth of the hero or heroine are treated with sympathy and truth. The author looks in his own heart and writes, and the readers says, “Exactly! I was just like that myself when I was a child,” not because he really was like that, but because the picture is a human one. But as the reader and the read grow up together, as it were, a difference develops. The character in the book suddenly unfolds wings and sails calmly away, while the reader remains on foot and gapes resentfully after. What gives Mr. [Arnold] Bennett and Mr. [H. G.] Wells and Mr. [John] Galsworthy their vogue is their trick of keeping heroes and readers trudging along together, through mud and sunshine, tired and often depressed, but always comrades. The women who have done this for their heroines in the whole history of English literature could be counted on the fingers of one hand.

Another reason for Miss Johnston’s failure to convince us of the reality of Hagar’s womanhood as she did of Hagar’s youth is the lack of perspective upon it. Great movements photographed in passing have at the best only cinematographic value; the film shakes, the action becomes galvanic, the scenes telescope each other as we gaze.

“Hagar” is an argument for the emancipation of women, not from moral conventions, but from those that would forbid her to agitate for better social conditions, to earn her own living, to refrain from undesired matrimony, to work for the ballot. If Miss Johnston had laid the scene of Hagar’s later rebellion, as she did her earlier one, in the South, or anywhere where these particular freedoms are less a matter of course than they are in New York, the picture would have held a keener interest. Instead, we see beautiful and devoted women in artistic gowns addressing admiring throngs in east side halls, or moving through a “still, pearl-gray mid-afternoon” at an open-air meeting in Union Square, where “all was a picture, lightly shifting with gleams of gold and a woman’s voice, earnest, lilting.” Their success is such a foregone conclusion that the “final applause” which invariably follows gives us about as much thrill as we would feel on beholding the triumphant finish of the same ladies’ morning attack upon their Whitely exerciser.

We are told, to be sure, that suffraging is no easy task:

And all the opposition—blind bigotry to be met, and a maniac fear of change, inertia, tradition, habit, the dead past’s hand, cold and heavy—and all the interested opposition, the things whose book the movement did not suit—and all the lethargy of womankind itself * * * And in the very camp, in the huge, chaotic movement itself, as in all the past’s vast human movements, recurring frictions, antagonisms, small jealousies, flags set up by individuals, pacifications and smoothings, bringing compatibles together, keeping incompatibles apart.

Which is, doubtless, an accurate statement of fact, but we would remind Miss Johnston that it is not novel writing. The novel reader “must be shown”—he resents being told.

A more serious fault of the latter half of “Hagar,” apart from its vagueness and unreality is its unfairness. It is very well for a political campaigner to deny either manners or morals to his adversary, but an author who takes for depiction “a slice of life” is supposed to take a slice, not a boring from a selected spot. Does Miss Johnston really think that all the opponents of woman suffrage are men who desire to keep women in bondage in order to trample upon them comfortably, or mediaevally minded clergymen or parasitic women? One would think so from the examples given in “Hagar.”

This is not the place for a discussion of the case au fond, but it is no less true of Miss Johnston’s book than of many other feminist tracts, that their authors confuse the ills which women suffer because they are women with the ills which they suffer because they are not voters. And the natural result of this confusion is the fallacy that all ills are immediately remediable, a fallacy responsible for much of the misdirected energy, frantic legislation, all-around unrest, that characterize our opening century. The fact is that most human ills are remediable only by the slow processes of evolution; those that touch us most closely and personally are often those that no amount of struggle can lighten. Why we have to bear them is a mystery, but it is deeply true that, borne to the end, without undue repining and bitterness, strength results, and a solid thing we call character. It is a slow process, and a painful one, and it calls for much folding of hands that long to be tearing down and building again, for a patience and possession of soul that the Hagars of today are casting aside as outworn weapons—to their own loss, and to the world’s loss.