Founding of the League 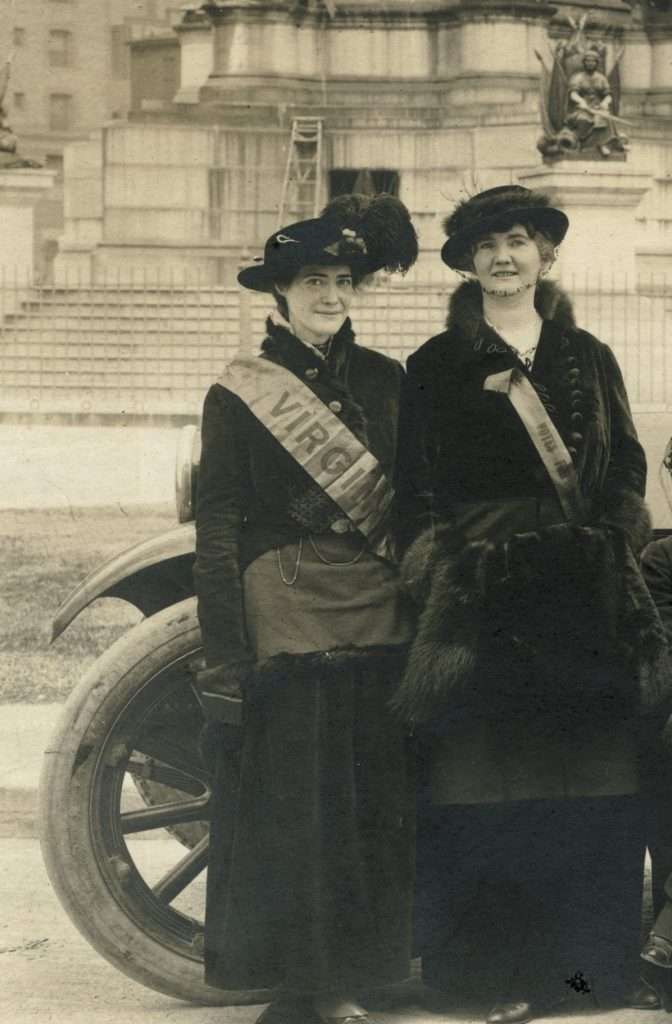 The Equal Suffrage League of Virginia was founded in November 1909, when a small group of women, the artist Adèle Clark among them, gathered at the Richmond home of Anne Clay Crenshaw to discuss the establishment of a statewide suffrage organization. Women wanted the vote, Clark later recalled, so they could work more effectively for the passage of health, education, and child labor laws. The league elected Lila Meade Valentine as its president and included writers Ellen Glasgow and Mary Johnston, artist Nora Houston, and physician Dr. Kate Waller Barrett among its members.

Through canvassing, distributing leaflets, and public speaking, the Equal Suffrage League intended to educate Virginia’s citizens and legislators and win their support for woman suffrage. Nearly 120 members joined during the league’s first year. By 1911, the state headquarters for the Equal Suffrage League had been established in Richmond; the following year, the league opened an office at 802 East Broad Street, conveniently located near Capitol Square.

At this first meeting of the Equal Suffrage League, Adèle Clark was elected recording secretary. Her first paying job in Richmond—as a stenographer for the Chamber of Commerce—provided useful experience. She enlisted her mother and sister for the cause, helped direct legislative initiatives, designed and drew postcards, organized suffrage rallies, and went on speaking tours that assisted in establishing new league chapters throughout the state. In 1912, Clark waged a war of words with antisuffragist Molly Elliot Seawell in various Richmond newspapers.

That same year, Clark worked crowds wherever she found them. At the state fair she helped to organize the showing of a suffrage film and distributed buttons and yellow “Votes for Women” flags. She also participated in street meetings in Capitol Square and on street corners, coaxing crowds to come hear the suffragists speak by standing up her easel and grabbing her paintbrushes. “It reached the point,” she remembered, “where I couldn’t see a fireplug without beginning ‘Ladies and gentlemen.'” Beginning in 1914, the group published its own monthly newspaper, the Virginia Suffrage News, and author Mary Johnston visited women’s colleges to rally faculty and students to the cause. A group of Richmond businessmen formed the Men’s Equal Suffrage League of Virginia; suffragists began distributing literature and visiting schools, fairs, and union meetings; and soon local suffrage leagues sprang up across the state.

Battle for Suffrage in Virginia 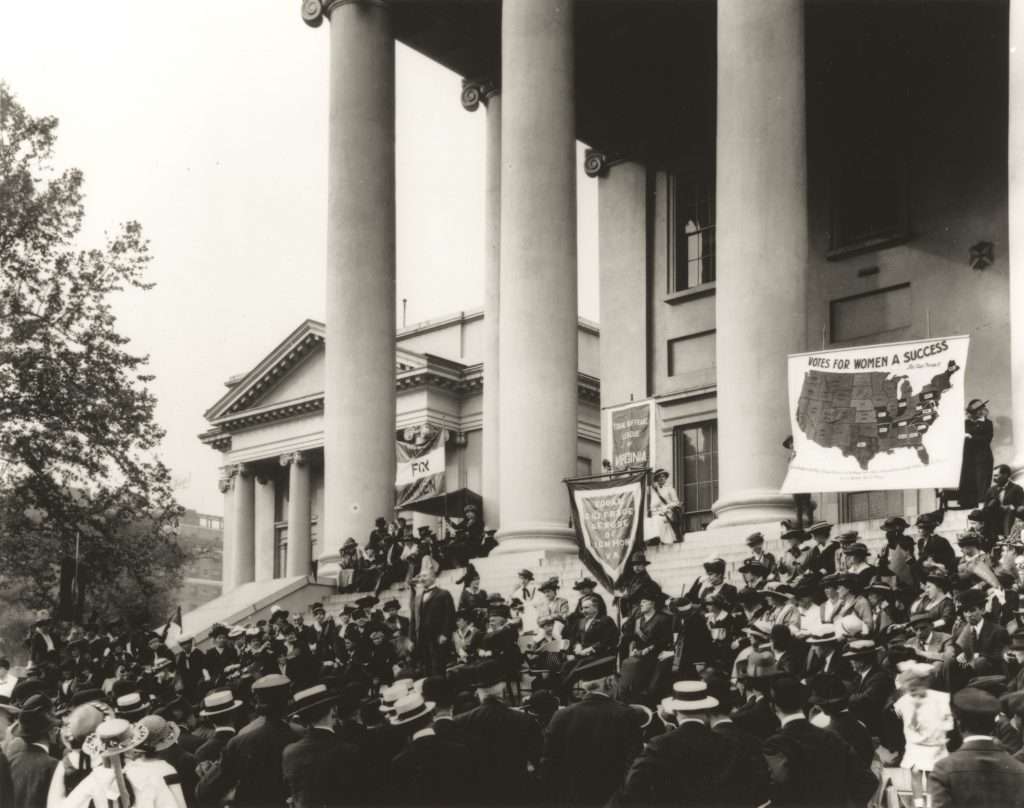 Under the leadership of the president Lila Meade Valentine, the league joined with the National American Woman Suffrage Association. In 1914, the Equal Suffrage League reported 45 local chapters; by 1916 that number had grown to 115, including 23 organized in that year alone, and almost every town in Virginia with more than 2,500 residents had a suffrage league. The Randolph-Macon Woman’s College Equal Suffrage League had 150 members by 1914. By 1919, after ten years of recruitment, membership had reached 30,000, making it most likely the largest state association in the South. The league had also secured endorsements from the State Teachers’ Association and the State Federation of Women’s Clubs. The Equal Suffrage League’s strategy focused on winning support in the General Assembly for a voting-rights amendment to the state constitution. Some suffragists, like Norfolk’s Pauline Adams, grew impatient with the painstaking approach and broke ranks, joining the more militant Congressional Union (later the National Woman’s Party), then pressuring Congress and U.S. president Woodrow Wilson to enact a federal suffrage amendment.

Questions about race complicated the campaign for suffrage in Virginia. The Virginia Association Opposed to Woman Suffrage vigorously attacked the Equal Suffrage League’s campaign. Organized in 1912 when woman suffrage first came before the General Assembly, these antisuffragists promoted the idea that giving women the right to vote would encourage black women to vote and therefore endanger whites’ control at the polls, which would lead to the demise of white supremacy. The Equal Suffrage League initially responded by ignoring the claim, believing the assertion to be bogus. According to historian Suzanne Lebsock, “In its original form this was a strictly defensive argument that rendered no judgment on the justice of white supremacy itself.” 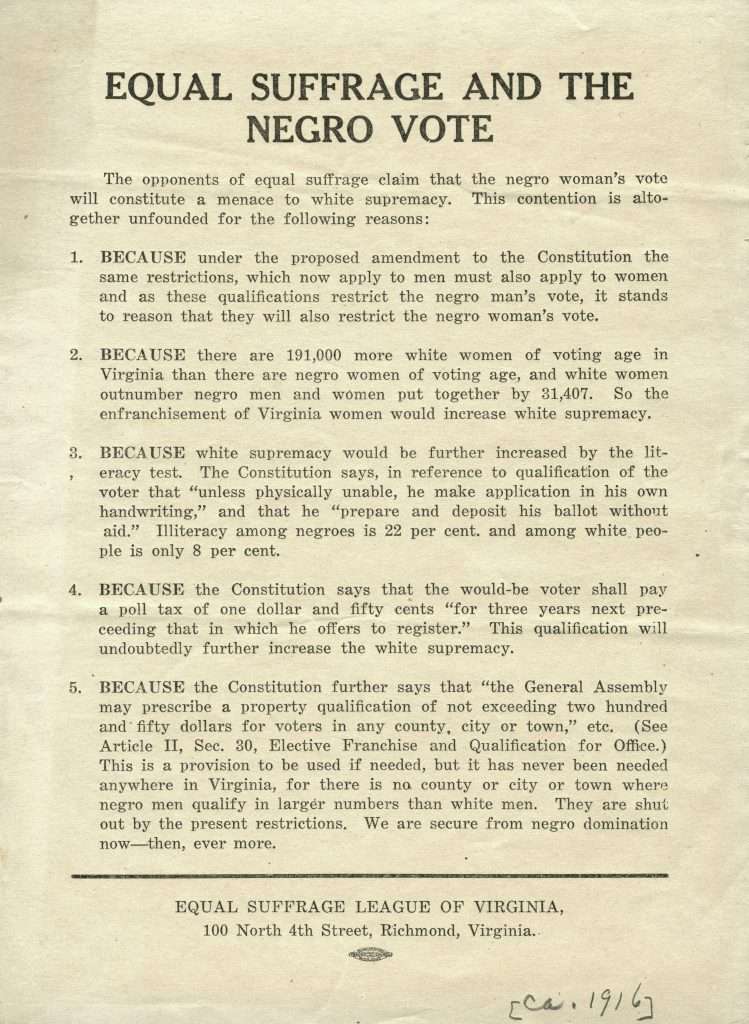 Equal Suffrage and the Negro Vote

By the last two years of the campaign, however, the rhetoric of antisuffragists became more odious and more effective, and the Equal Suffrage League countered by denying the accusations. The group’s 1916 pamphlet “Equal Suffrage and the Negro Vote” stated that “the enfranchisement of Virginia women would increase white supremacy” and “We are secure from negro domination now—then, even more.” The Equal Suffrage League thus perpetuated the white supremacy argument and consequently sanctioned the silencing of black women in the public debate. As Lila Meade Valentine explained in a private letter: “I believe that all women, white or black, who meet the qualifications for suffrage in any State should have that right, but in working to secure that right, we should exercise common sense, and not complicate our efforts and add difficulties of the task by injecting elements of discord. As you know, the negro is the one remaining argument against suffrage in the Southern States.” She justified her rationale accordingly: “This is not a matter of principle but of expediency.” 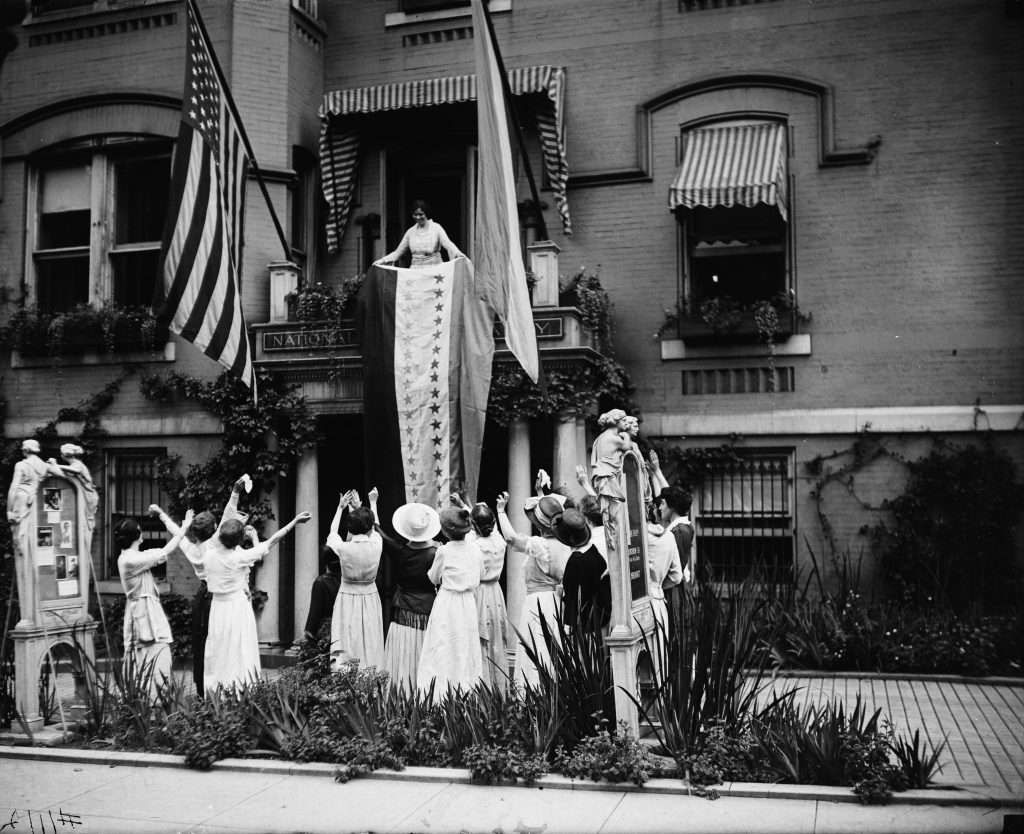 Despite the fact that the Equal Suffrage League was one of the most vital suffrage organizations in the South, woman suffrage resolutions were defeated in the Virginia legislature three times between 1912 and 1916. When Congress passed the Nineteenth Amendment to the U.S. Constitution in June 1919, the Equal Suffrage League fought hard for ratification. Virginia politicians did not relent, however, and Virginia was one of the nine southern states that refused to grant the vote to women. The suffrage amendment failed by large majorities in both houses. (On February 6, 1920, after more than twelve hours of debate, the Senate of Virginia voted to reject the Nineteenth Amendment, 24 to 10; six days later, the House voted 62 to 22 against ratification.) The measure passed in thirty-six other states, however. Virginia women at last won the right to vote in August 1920, when the Nineteenth Amendment became law, and they exercised that right soon after, in the November elections. The General Assembly stubbornly withheld its ratification until 1952.

Challenges Black Women Faced in Registering and Voting in 1920
Within a few weeks of the national victory in 1920, the Equal Suffrage League disbanded. Its successor, the Virginia League of Women Voters, began work shortly afterward to make the new vote an informed one. The league sponsored registration drives, voter education programs, and lobbying efforts on behalf of social welfare issues. Virginia women were given only one month to register to vote in the November elections, prompting the Richmond Times-Dispatch to complain in advance about the inevitable confusion and congestion at the polls. By early in October 1920, more than 13,000 Richmond women had registered to vote in the November presidential election—10,645 white and 2,410 black women. Clearly women were not to be discouraged by long lines and disgruntled clerks. On Election Day, the newspaper ran an advertisement for a sale at a downtown department store on “coats for the kiddies,” with an invitation to stop by “When Mother and Father Go Voting Today.”

The campaign for the vote may have faltered in Virginia, but the suffrage movement did not. While the Equal Suffrage League ultimately failed to win the vote, it secured bills concerning juvenile delinquency and child neglect, and helped defeat legislation to lower standards for milk and increase the working hours of women and children in factories. The work of suffrage ultimately extended the role of women to encompass the world of politics and progressive reform, and opened a new chapter in Virginia history.