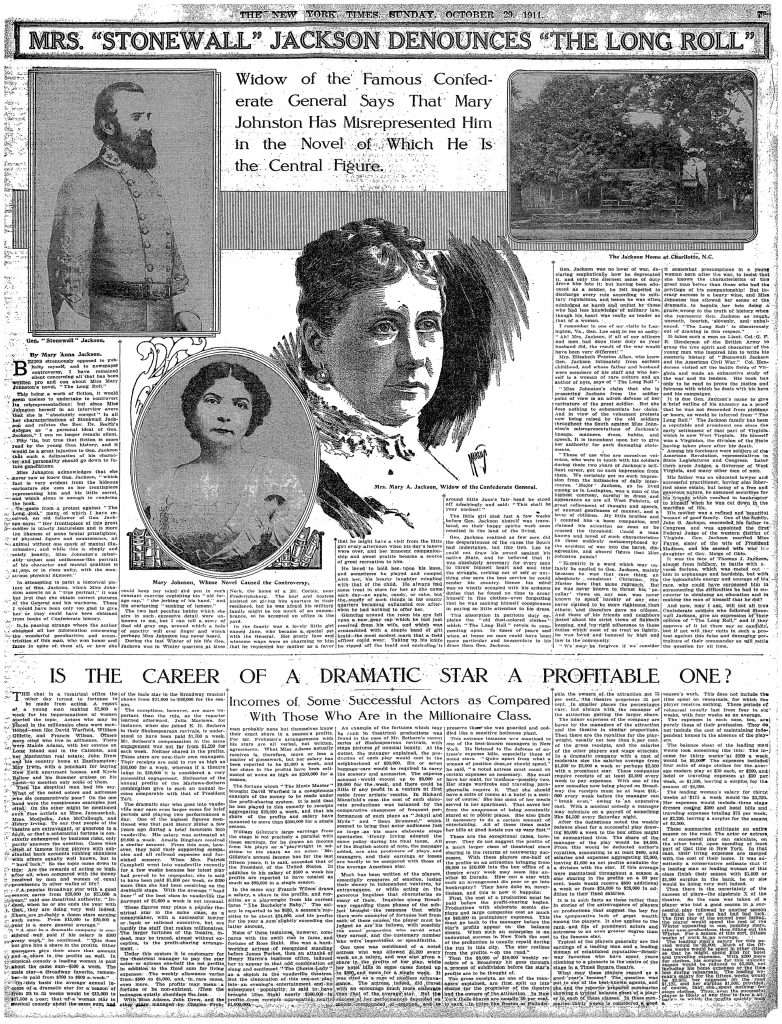 Widow of the Famous Confederate General Says that Mary Johnston Has Misrepresented Him in the Novel of Which He Is the Central Figure.

Being strenuously opposed to publicity myself, and to newspaper controversy, I have remained silent concerning all that has been written pro and con about Miss Mary Johnston’s novel, “The Long Roll.”

This being a work of fiction, it would seem useless to undertake to controvert its misrepresentations; but since Miss Johnston herself in an interview avers that she is “absolutely correct” in all her characterizations of Stonewall Jackson and refutes the Rev. Dr. Smith’s defense as “a personal ideal of Gen. Jackson,” I can no longer remain silent.

Pity ’tis, but true that fiction is more read by the young than history, and it would be a great injustice to Gen. Jackson that such a delineation of his character and personality should go down to future generations.

Miss Johnston acknowledges that she never saw or knew Gen. Jackson, “which fact is very evident from the hideous caricature she uses as her frontispiece representing him and his little sorrel, and which alone is enough to condemn the book.

To quote from a protest against “The Long Roll,” many of which I have received, an old follower of Gen. Jackson says: “Her frontispiece of this great soldier is utterly featureless and is more the likeness of some brutal prizefighter, of physical figure and countenance, all animal without one spark of mental illumination; and while this is simply and solely beastly, Miss Johnston’s miserable unjust and unlikeness-like portrait of his character and mental qualities is at one, or in close unity, with the monstrous physical likeness.”

In attempting to pain a historical picture of Gen. Jackson, which Miss Johnston asserts as a “true portrait,” it was but just that she obtain correct pictures of the General and his warhorse. These I would have been only too glad to give her or they could have been obtained from books of Confederate history.

It is passing strange where the author obtained all her information concerning the wonderful peculiarities and eccentricities of this man, who won honor and fame in spite of them all, or how she could keep her mind and pen in such constant exercise exploiting his “old forage cap,” “the jerking of his hand,” and his everlasting “sucking of lemons.”

The two last peculiar habits which she airs in such excessive detail were unknown to me, but I can tell a story of that old gray cap, around which a halo of sanctity will linger and which perhaps Miss Johnston has never heard.

During the last Winter of his life Gen. Jackson was in Winter quarters at Moss Neck, the home of a Mr. [James Parke] Corbin, near Fredericksburg. The host and hostess insisted on giving him quarters in their residence, but he was afraid his military family might be too much of an encumbrance, so he accepted an office in the yard.

In the family was a lovely little girl named Jane, who became a special pet with the General. Her pretty face and winsome ways were so charming to him that he requested her mother as a favor that he might have a visit from the little girl every afternoon when his day’s labors were over, and her innocent companionship and sweet prattle became a source of great recreation to him.

He loved to hold her upon his knee, and sometimes he played and romped with her, his hearty laughter mingling with that of the child. He always had some treat in store for her as she came each day—an apple, candy, or cake, but the supply of such things in his scanty quarters become exhausted one afternoon he had nothing to offer her.

Glancing around the room his eye fell upon a new gray cap which he had just received from his wife, and which was ornamented with a simple band of gild braid—the most modest mark that a field officer could wear. Taking up his knife he ripped off the braid and encircling it around little Jane’s fair head he stood off admiringly and said: “This shall be your coronet!”

The little girl died just a few weeks before Gen. Jackson himself was translated, so their happy spirits were soon reunited in the land of the living.

Gen. Jackson realized as few men did the desperateness of the cause the South had undertaken, but like Gen. Lee he could not draw his sword against his native State, and he believed that it was absolutely necessary for every man to throw himself heart and soul into the struggle, recking not of self or anything else save the best service he could render his country. Hence his mind was so wholly occupied with his arduous duties that he found no time to array himself in fine clothes—even forgetting that he was making himself conspicuous in paying so little attention to his dress.

This absorption in patriotic duty explains the “old dust-colored clothes” which “The Long Roll” revels in commenting upon. In times of peace and when at home no man could have been more particular and immaculate in his dress than Gen. Jackson.

Gen. Jackson was no lover of war, declaring emphatically how he deprecated it, and only the sternest sense of duty drove him into it; but having been educated as a soldier, he felt impelled to discharge every rule according to military regulations, and hence he was often misjudged as harsh and unjust by those who had less knowledge of military law, though his heart was really as tender as that of a woman.

I remember in one of my visits to Lexington, Va., Gen. Lee said to me so sadly: “Ah! Mrs. Jackson, if all of our officers and men had done their duty as your husband did, the result of the war would have been very different!”

Mrs. Elizabeth Preston Allan, who knew Gen. Jackson intimately from earliest childhood, and whose father and husband were members of his staff and who herself is a woman of rare culture and an author of note, says of “The Long Roll”:

“Miss Johnston’s claim that she is presenting Jackson from the soldier point of view is an adroit defense of her caricature of the great soldier. But she does nothing to substantiate her claim. And in view of the vehement protests now being raised by the old soldiers throughout the South against Miss Johnston’s misrepresentations of Jackson’s lineage, manners, dress, habits, and speech, it is incumbent upon her to give her authority for such damaging statements.

“Those of use who are ourselves veterans, who were in touch with his soldiers during those two years of Jackson’s brilliant career, got no such impression from them. We certainly got no such impression from the intimacies of daily intercourse. ‘Major’ Jackson, as he lived among us in Lexington, was a man of the highest courtesy, careful in dress and appearance as are all West Pointers, of great refinement of thought and speech, of unusual gentleness of manner, and a lover of children. My little brother and I counted him a boon companion, and claimed his attention as soon as he crossed the threshold. Could a man known and loved of such characteristics as these suddenly metamorphosed by the accident of war into the harsh, disagreeable, and absurd figure that Miss Johnston paints?

“Eccentric is a word which may unfairly be applied to Gen. Jackson, mainly because he was that rare thing, an absolutely consistent Christian. His Master bore that same reproach. But he was never known to thrust his ‘peculiar’ views on any one, was never known to speak harshly of any one; never claimed to be more righteous than others; and therefore gave no offense. And those of his friends and neighbors jested about his strict views of Sabbath keeping, and his rigid adherence to those duties which most of us treat so lightly, he was loved and honored by high and low in the community.

“We may be forgive if we consider it somewhat presumptuous in a young woman born after the war, to insist that she knows the characteristics of this great man better than those who had the privilege of his companionship! But literary success is a heavy wine, and Miss Johnston has allowed her sense of the dramatic to beguile her into doing a grave wrong to the truth of history when she represents Gen. Jackson as rough, uncouth, boorish, slovenly, and unbalanced. ‘The Long Roll’ is disastrously out of drawing in this respect.”

It takes such a man as Lieut. Col. G. F. R. Henderson of the British Army to grasp the true spirit and character of the young man who inspired him to write his master history of “Stonewall Jackson and the American Civil War.” Col. Henderson visited all the battle fields of Virginia and made an exhaustive study of the war and its leaders. His book has only to be read to prove the justice and fairness with which he deals with his hero and his campaigns.

It is due Gen. Jackson’s name to give a brief outline of his ancestry as a proof that he was not descended from plebians or boors, as would be inferred from “The Long Roll.” The Jackson family has been a reputable and prominent one since the early settlement of that part of Virginia which is now West Virginia. He himself was a Virginian, the division of the State having taken place after his death.

Among his forebears were soldiers of the American Revolution, representatives in State Legislatures and Congress. Later there arose Judges, a Governor of West Virginia, and many other men of note.

His father was an educated lawyer and successful practitioner, having also inherited some estate, but being of a free and generous nature, he assumed securities for his friends which resulted in bankruptcy to himself when he was cut down in the meridian of life.

His mother was a refined and beautiful woman of good family. One of the family, John G. Jackson, succeeded his father in Congress, and was appointed the first Federal Judge of the western district of Virginia. Gen. Jackson married Miss [Mary “Polly”] Payne, sister of the wife of President Madison, and his second wife was the daughter of Gov. [Return J.] Meigs of Ohio.

It was the fate of Thomas J. Jackson, almost from infancy, to battle with adverse fortune, which was meted out to him in orphanage and hardship, but with the indomitable energy and courage of his race, who could have surpassed him in surmounting the difficulties he had to encounter in obtaining an education and in making the man of himself that he did?

And now, may I ask, will not all true Confederate soldiers who followed Stonewall Jackson, give an expression of their opinion of “The Long Roll,” and if they approve of it let them say so candidly, but if not will they unite in such a protest against this false and damaging portraiture of their commander as will settle the question for all time.