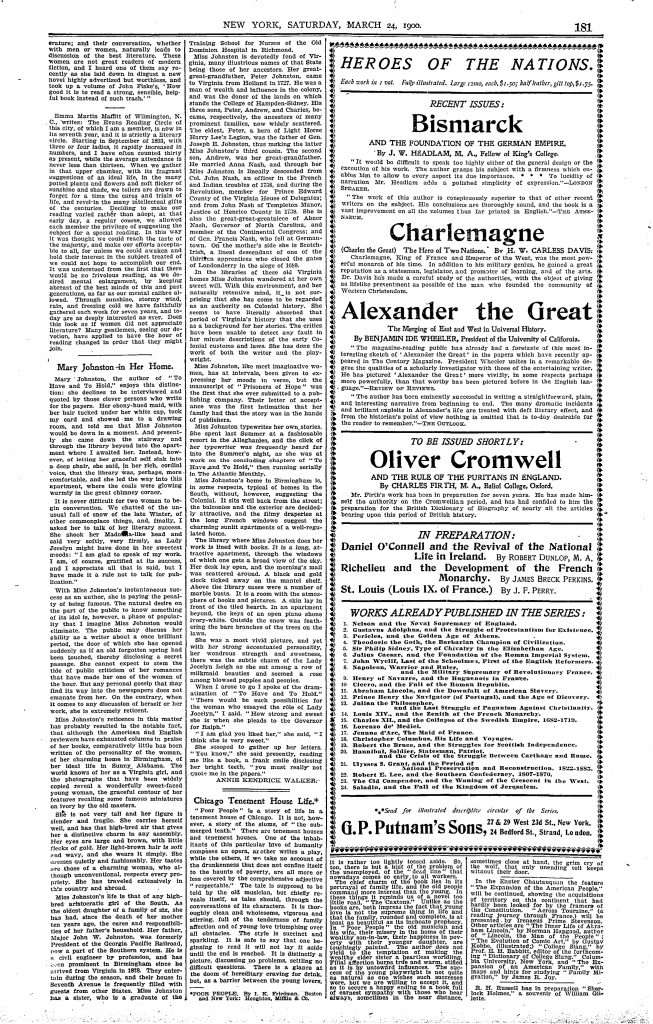 Mary Johnston, the author of “To Have and To Hold,” enjoys this distinction: she declines to be interviewed and quoted by those clever persons who write for the papers. Her ebony-hued maid, with her hair tucked under her white cap, took my card and showed me to a drawing room, and told me that Miss Johnston would be down in a moment. And presently she came down the stairway and through the library beyond into the apartment where I awaited her. Instead, however, of letting her graceful self sink into a deep chair, she said, in her rich, cordial voice, that the library was, perhaps, more comfortable, and she led the way into this apartment, where the coals were glowing warmly in the great chimney corner.

It is never difficult for two women to begin conversation. We chatted of the unusual fall of snow of the later Winter, of other commonplace things, and, finally, I asked her to talk of her literary success. She shook her Madonna-like head and said very softly, very firmly, as Lady Jocelyn might have done in her sweetest moods: “I am glad to speak of my work. I am, of course, gratified at its success, and I appreciate all that is said, but I have made it a rule not to talk for publication.”

With Miss Johnston’s instantaneous success as an author, she is paying the penalty of being famous. The natural desire on the part of the public to know something of its idol is, however, a phase of popularity that I imagine Miss Johnston would eliminate. The public may discuss her ability as a write about a once brilliant period, the door of which she has opened suddenly as if an old forgotten spring had been touched, thereby disclosing a secret passage. She cannot expect to stem the tide of public criticism of her romances that have made her one of the women of the hour. But any personal gossip that may find its way into the newspapers does not emanate from her. On the contrary, when it comes to any discussion of herself or her work, she is extremely reticent.

Miss Johnston’s reticence in this matter has probably resulted in the notable fact, that although the American and English reviewers have exhausted columns in praise of her books, comparatively little has been written of the personality of the woman, of her charming home in Birmingham, of her ideal life in Sunny Alabama. The world knows of her as a Virginia girl, and the photographs that have been widely copied reveal a wonderfully sweet-faced young woman, the graceful contour of her features recalling some famous miniatures on ivory by the old masters.

She is not very tall and her figure is slender and fragile. She carries herself well, and has that high-bred air that gives her a distinctive charm in any assembly. Her eyes are large and brown, with little flecks of gold. Her light-brown hair is soft and wavy, and she wears it simply. She dresses quietly and fashionably. Her tastes are those of a charming woman, who although unconventional, respects every propriety. She has traveled extensively in this country and abroad.

Miss Johnston’s life is that of any high-bred aristocratic girl of the South. As the oldest daughter of a family of six, she has had, since the death of her mother ten years ago, the cares and responsibilities of her father’s household. Her father, Major John W. Johnston, was formerly President of the Georgia Pacific Railroad, now a part of the Southern system. He is a civil engineer by profession, and has been prominent in Birmingham since he arrived from Virginia in 1878. They entertain during the season, and their house in Seventh Avenue is frequently filled with guests from other States. Miss Johnston has a sister, who is a graduate of the Training School for Nurses of the Old Dominion Hospital in Richmond.

Miss Johnston is devotedly fond of Virginia, may illustrious names of that State being those of her ancestors. Her great-great-grandfather, Peter Johnston, came to Virginia from Holland in 1727. He was a man of wealth and influence in the colony, and was the donor of the lands on which stands the College of Hampden-Sidney. His three sons, Peter Andrew, and Charles, became, respectively, the ancestors of many prominent families, now widely scattered. The eldest, Peter, a hero of Light Horse Harry Lee‘s Legion, was the father of Gen. Joseph E. Johnston, thus making the latter Miss Johnston’s third cousin. The second son, Andrew, was her great-grandfather. He married Anna Nash, and through her Miss Johnston is lineally descended from Col. John Nash, an officer in the French and Indian troubles of 1758, and during the Revolution, member for Prince Edward County of the Virginia House of Delegates; and from John Nash of Templeton Manor, Justice of Henrico County in 1738. She is also the great-great-greatniece of Abner Nash, Governor of North Carolina, and member of the Continental Congress; and of Gen. Francis Nash, who fell at Germantown. On the mother’s side she is Scotch-Irish, a lineal descendant of one of the thirteen apprentices who closed the gates of Londonderry in the siege of 1680.

In the libraries of these old Virginia homes Miss Johnston wandered at her own sweet will. With this environment, and her naturally retentive mind, it is not surprising that she has come to be regarded as an authority on Colonial history. She seems to have literally absorbed that period of Virginia’s history that she uses as a background for her stories. The critics have been unable to detect any fault in her minute descriptions of the early Colonial customs and laws. She has done the work of both the writer and the playwright.

Miss Johnston, like most imaginative women, has at intervals, been given to expressing her moods in verse, but the manuscript of “Prisoners of Hope” was the first that she ever submitted to a publishing company. Their letter of acceptance was the first intimation that her family had that the story was in the hands of publishers.

Miss Johnston typewrites her own stories. She spent last Summer at a fashionable resort in the Alleghanies, and the click of her typewriter was frequently heard far in to the Summer’s night, as she was at work on the concluding chapters of “To Have and To Hold,” then running serially in The Atlantic Monthly.

Miss Johnston’s home in Birmingham is, in some respects, typical of homes in the South, without, however, suggesting the Colonial. It sits well back from the street; the balconies and the exterior are decidedly attractive, and the filmy draperies at the long French windows suggest the charming sunlit apartments of a well-regulated home.

The library where Miss Johnston does her work is lined with books. It is a long, attractive apartment, through the windows of which one gets a broad view of the sky. Her desk lay open, and the morning’s mail was scattered around. A black and gold clock ticked away on the mantel shelf. Above the library cases were a number of marble busts. It is a room with the atmosphere of books and pictures. A skin lay in front of the tiled hearth. In an apartment beyond, the keys of an open piano shone ivory-white. Outside the snow was feathering the bare branches of the trees on the lawn.

She was a most vivid picture, and yet with her strong accentuated personality, her wondrous strength and sweetness, there was the subtle charm of the Lady Jocelyn Leigh as she sat among a row of milkmaid beauties and seemed a rose among blowsed poppies and peonies.

When I arose to go I spoke of the dramatization of “To Have and To Hold.” “There would be such possibilities for the woman who essayed the role of Lady Jocelyn,” I said. “How strong and sweet she is when she pleads to the Governor for Ralph.”

She stooped to gather up her letters. “You know,” she said presently, reading me like a book, a frank smile disclosing her bright teeth, “you must really not quote me in the papers.”