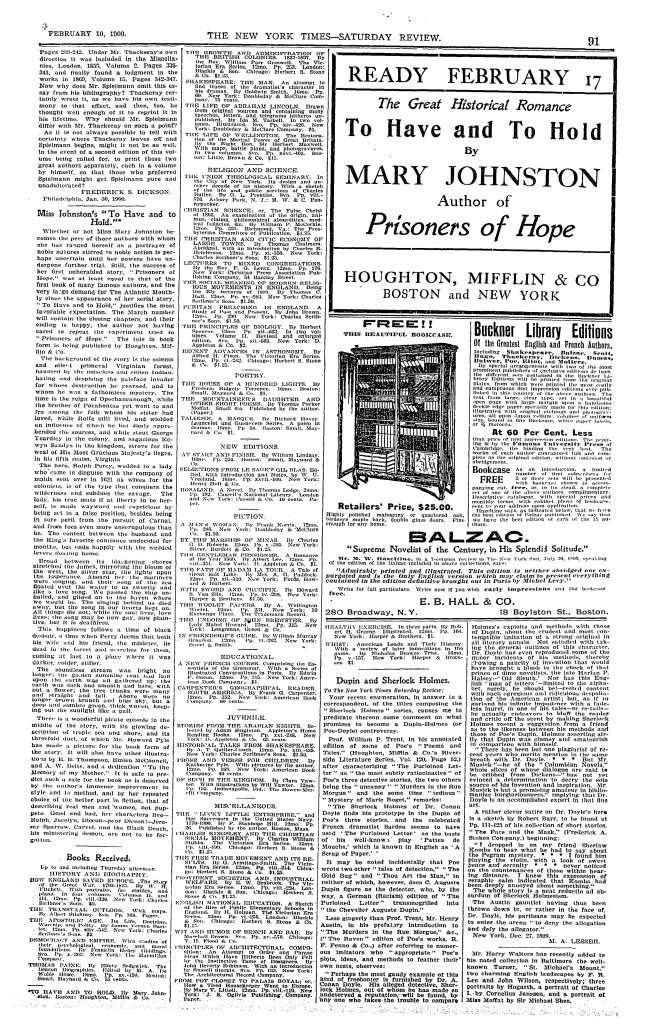 Whether or not Miss Mary Johnston becomes the peer of those authors with whom she has ranged herself as a portrayer of noble natures stirred to noble action is perhaps uncertain until her powers have undergone further trial. Still, the success of her first unheralded story, “Prisoners of Hope,” was at least equal to that of the first book of many famous authors, and the very large demand for The Atlantic Monthly since the appearance of her serial story, “To Have and to Hold,” justifies the most favorable expectation. The March number will contain the closing chapters, and their ending is happy, the author not having cared to repeat the experiment tried in “Prisoners of Hope.” The tale in book form is being published by Houghton, Mifflin & Co.

The background of the story is the solemn and silent primeval Virginian forest, haunted by the noiseless and sullen Indian, hating and despising the paleface invader for whose destruction he yearned, and to whom he was a fathomless mystery. The time is the reign of Opechancanough, while the brother of Pocahontas yet went to and fro among the folk whom his sister had loved, while Rolfe still lived, and wielded an influence of which he but dimly apprehended the sources, and while stout George Yeardley in the colony, and sagacious Edwyn Sandys in the kingdom, strove for the weal of His Most Gracious Majesty’s lieges, in his fifth realm, Virginia.

The hero, Ralph Percy, wedded to a lady who came in disguise with the company of maids sent over in 1621 as wives for the colonists, is of the type that conquers the wilderness and subdues the savage. The lady, his true mate if at liberty to be herself, is made wayward and capricious by being set in a false position, besides being in sore peril from the pursuit of Carnal, and from foes even more unscrupulous than he. The contest between the husband and the King’s favorite continues undecided for months, but ends happily with the wedded lovers floating home.

Broad between its blackening shores stretched the James, mirroring the bloom of the west, the silver star, the lights upon the Esperance. Aboard her the mariners were singing, and their song of the sea floated over the water to us sweetly and like a love song. We passed the ship un-hailed, and glided on to the haven where we would be. The singing behind us died away, but the song in our hearts kept on. All things die not; while the soul lives, love lives; the song may be now gay, now plaintive, but it is deathless.

This happiness follows a time of black despair, a time when Percy deems that both his wife and his friend, the minister, lie dead in the forest and searches for them, coming at last to a place where it was darker, colder, stiller.

The soundless stream was bright no longer; the golden sunshine that had lain upon the earth was all gathered up; the earth was dark and smooth and bare, with not a flower; the tree trunks were many and straight and tall. Above were no longer brown branch and blue sky, but a deep and sombre green, thick woven, keeping out the sunlight like a pall.

There is a wonderful pirate episode in the middle of the story, with its glowing description of the tropic sea and shore, and its threefold duel, of which Mr. Howard Pyle has made a picture for the book form of the story. It will also have other illustrations by E. B. Thompson, Emlen McConnell, and A. W. Belts, and a dedication “To the Memory of my Mother.” It is safe to predict such a sale for the book as is deserved by the author’s immense improvement in style and in method, and by her repeated choice of the better part in fiction, that of describing real men and women, not puppets. Good and bad, her characters live—Ralph, Jocelyn, Diccon—poor Diccon!—Jeremy Sparrow, Carvel, and the Black Death, his ministering demon, are not to be forgotten.