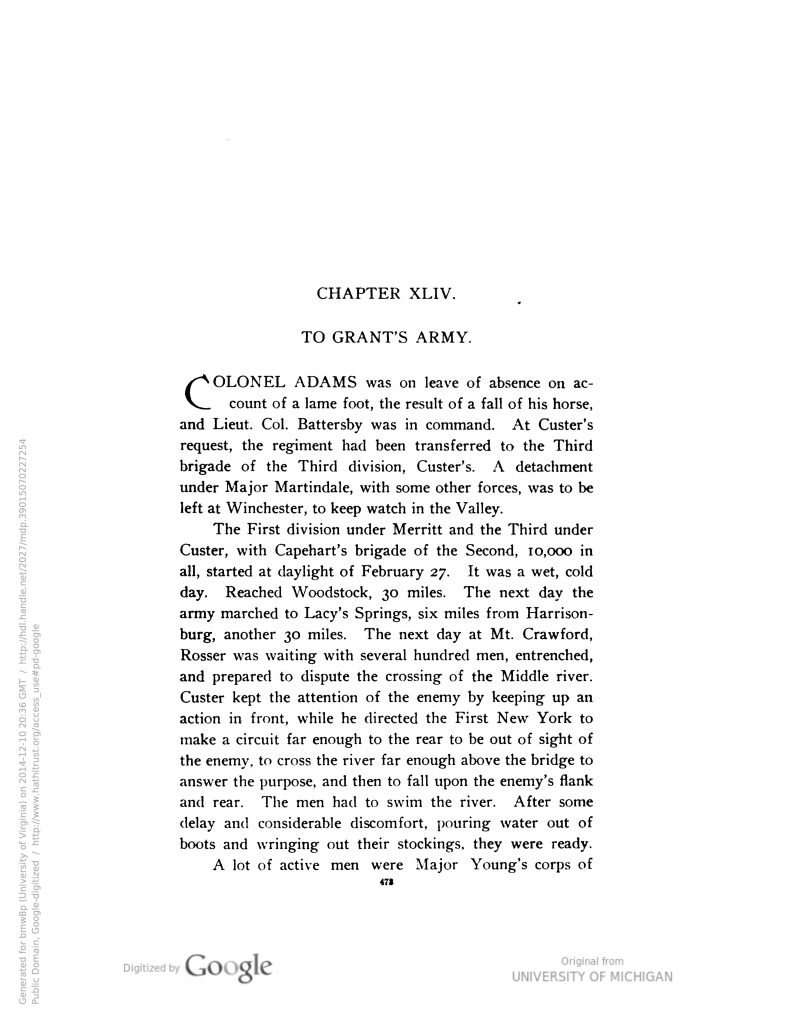 COLONEL ADAMS was on leave of absence on account of a lame foot, the result of a fall of his horse, and Lieut. Col. Battersby was in command. At [Union general George Armstrong] Custer's request, the regiment had been transferred to the Third brigade of the Third division, Custer's. A detachment under Major Martindale, with some other forces, was to be left at Winchester, to keep watch in the [Shenandoah] Valley.

The First division under Merritt and the Third under Custer, with Capehart's brigade of the Second, 10,000 in all, started at daylight of February 27. It was a wet, cold day. Reached Woodstock, 30 miles. The next day the army marched to Lacy's Springs, six miles from Harrisonburg, another 30 miles. The next day at Mt. Crawford, [Confederate general Thomas L.] Rosser was waiting with several hundred men, entrenched, and prepared to dispute the crossing of the Middle river. Custer kept the attention of the enemy by keeping up an action in front, while he directed the First New York to make a circuit far enough to the rear to be out of sight of the enemy, to cross the river far enough above the bridge to answer the purpose, and then to fall upon the enemy's flank and rear. The men had to swim the river. After some delay and considerable discomfort, pouring water out of boots and wringing out their stockings, they were ready. A lot of active men were Major Young's corps of 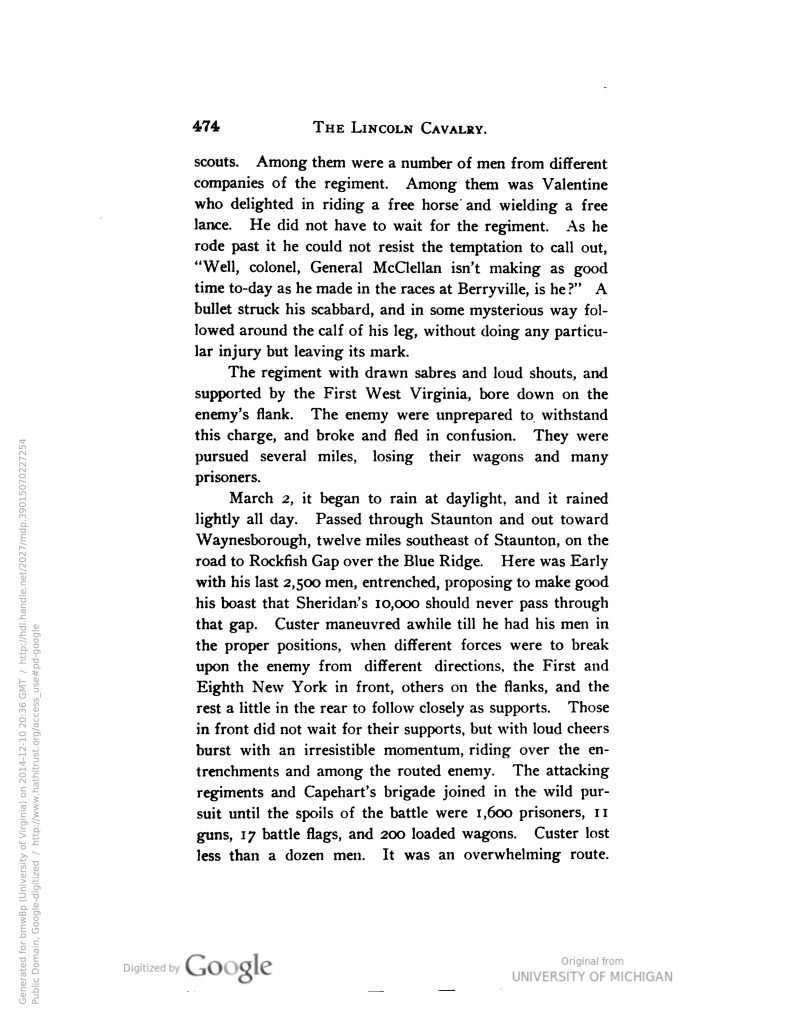 scouts. Among them were a number of men from different companies of the regiment. Among them was Valentine who delighted in riding a free horse and wielding a free lance. He did not have to wait for the regiment. As he rode past it he could not resist the temptation to call out, "Well, colonel, General McClellan isn't making as good time to-day as he made in the races at Berryville, is he?" A bullet struck his scabbard, and in some mysterious way followed around the calf of his leg, without doing any particular injury but leaving its mark.

The regiment with drawn sabres and loud shouts, and supported by the First West Virginia, bore down on the enemy's flank. The enemy were unprepared to withstand this charge, and broke and fled in confusion. They were pursued several miles, losing their wagons and many prisoners.

March 2, it began to rain at daylight, and it rained lightly all day. Passed through Staunton and out toward Waynesborough, twelve miles southeast of Staunton, on the road to Rockfish Gap over the Blue Ridge. Here was [Confederate general Jubal A.] Early with his last 2,500 men, entrenched, proposing to make good his boast that [Union general Philip H.] Sheridan's 10,000 should never pass through that gap. Custer maneuvred awhile till he had his men in the proper positions, when different forces were to break upon the enemy from different directions, the First and Eighth New York in front, others on the flanks, and the rest a little in the rear to follow closely as supports. Those in front did not wait for their supports, but with loud cheers burst with an irresistible momentum, riding over the entrenchments and among the routed enemy. The attacking regiments and Capehart's brigade joined in the wild pursuit until the spoils of the battle were 1,600 prisoners, 11 guns, 17 battle flags, and 200 loaded wagons. Custer lost less than a dozen men. It was an overwhelming route. 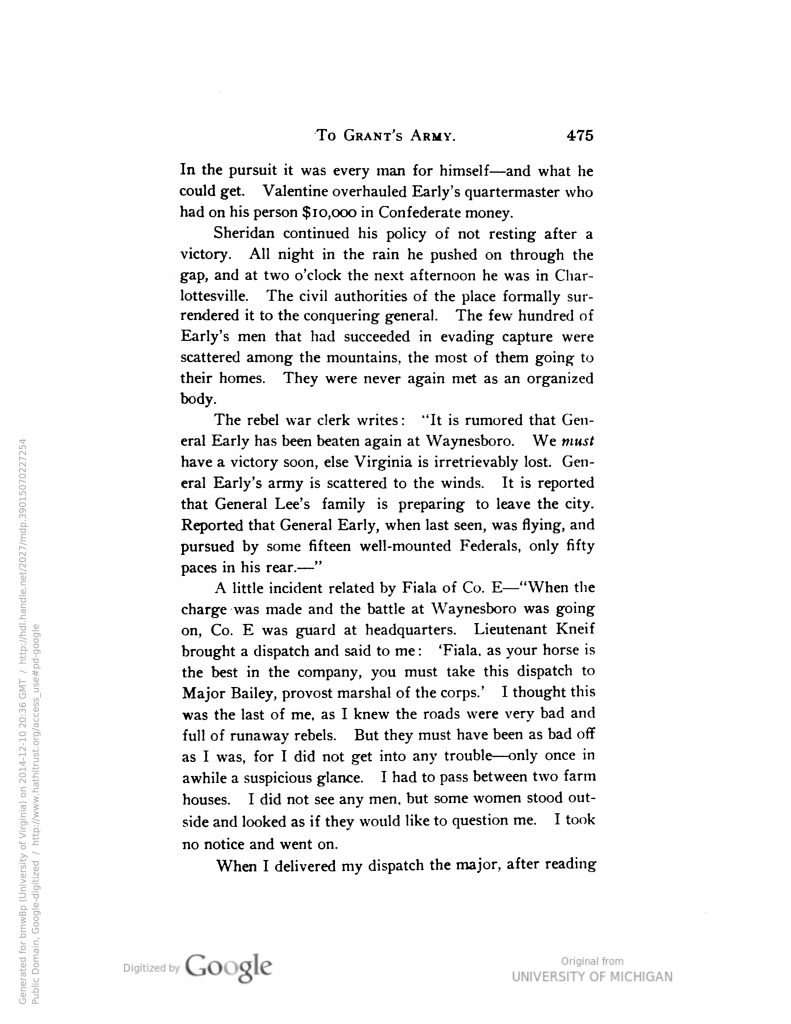 In the pursuit it was every man for himself—and what he could get. Valentine overhauled Early's quartermaster who had on his person $10,000 in Confederate money.

Sheridan continued his policy of not resting after a victory. All night in the rain he pushed on through the gap, and at two o'clock the next afternoon he was in Charlottesville. The civil authorities of the place formally surrendered it to the conquering general. The few hundred of Early's men that had succeeded in evading capture were scattered among the mountains, the most of them going to their homes. They were never again met as an organized body.

A little incident related by Fiala of Co. E—"When the charge was made and the battle at Waynesboro was going on, Co. E was guard at headquarters. Lieutenant Kneif brought a dispatch and said to me: 'Fiala, as your horse is the best in the company, you must take this dispatch to Major Bailey, provost marshal of the corps.' I thought this was the last of me, as I knew the roads were very bad and full of runaway rebels. But they must have been as bad off as I was, for I did not get into any trouble—only once in awhile a suspicious glance. I had to pass between two farm houses. I did not see any men, but some women stood outside and looked as if they would like to question me. I took no notice and went on.

When I delivered my dispatch the major, after reading 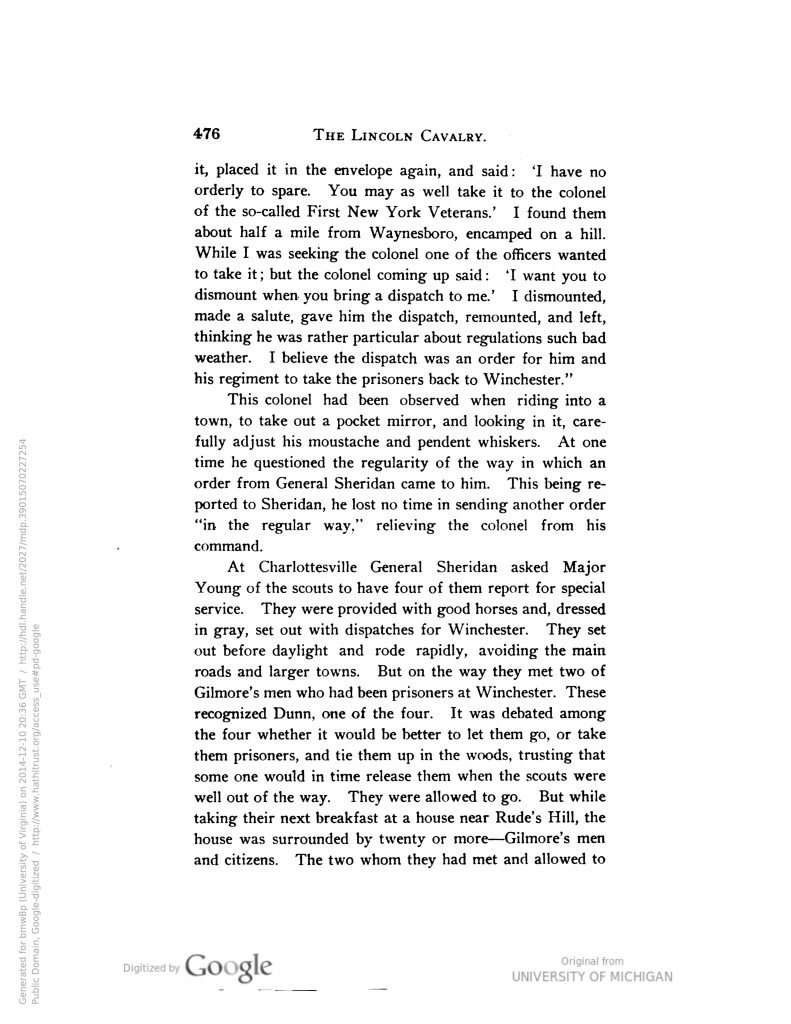 it, placed it in the envelope again, and said: 'I have no orderly to spare. You may as well take it to the colonel of the so-called First New York Veterans.' I found them about half a mile from Waynesboro, encamped on a hill. While I was seeking the colonel one of the officers wanted to take it; but the colonel coming up said: 'I want you to dismount when you bring a dispatch to me.' I dismounted, made a salute, gave him the dispatch, remounted, and left, thinking he was rather particular about regulations such bad weather. I believe the dispatch was an order for him and his regiment to take the prisoners back to Winchester."

This colonel had been observed when riding into a town, to take out a pocket mirror, and looking in it, carefully adjust his moustache and pendent whiskers. At one time he questioned the regularity of the way in which an order from General Sheridan came to him. This being reported to Sheridan, he lost no time in sending another order "in the regular way," relieving the colonel from his command.

At Charlottesville General Sheridan asked Major Young of the scouts to have four of them report for special service. They were provided with good horses and, dressed in gray, set out with dispatches for Winchester. They set out before daylight and rode rapidly, avoiding the main roads and larger towns. But on the way they met two of Gilmore's men who had been prisoners at Winchester. These recognized Dunn, one of the four. It was debated among the four whether it would be better to let them go, or take them prisoners, and tie them up in the woods, trusting that some one would in time release them when the scouts were well out of the way. They were allowed to go. But while taking their next breakfast at a house near Rude's Hill, the house was surrounded by twenty or more—Gilmore's men and citizens. The two whom they had met and allowed to 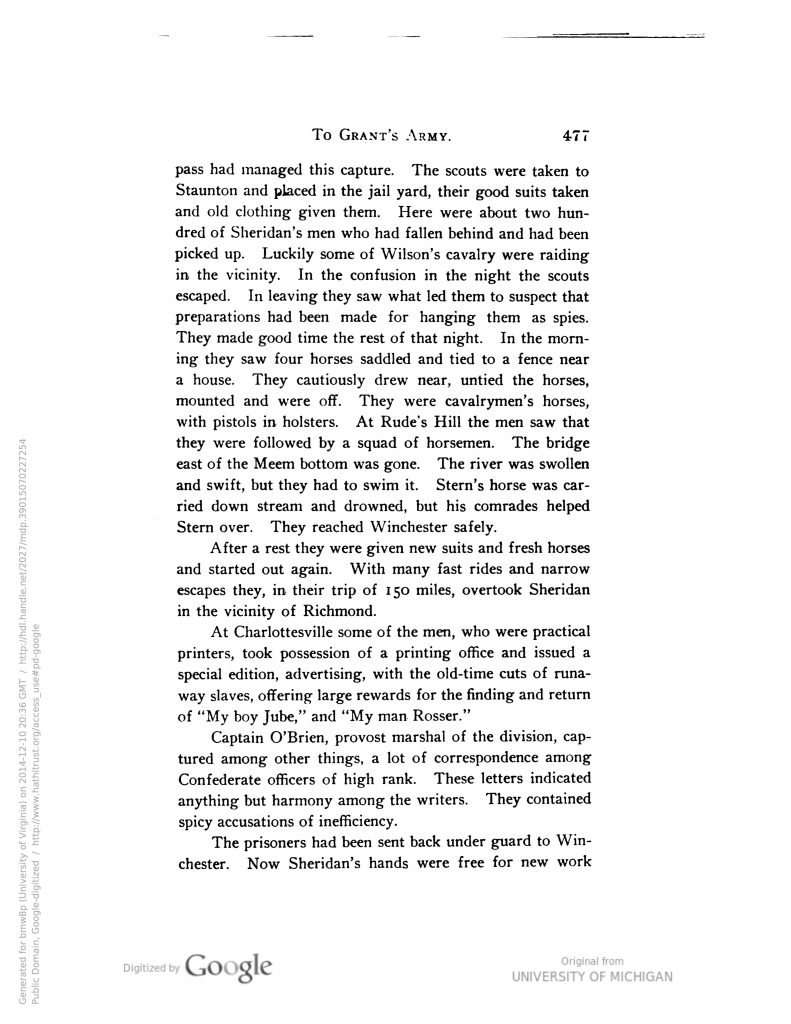 pass had managed this capture. The scouts were taken to Staunton and placed in the jail yard, their good suits taken and old clothing given them. Here were about two hundred of Sheridan's men who had fallen behind and had been picked up. Luckily some of Wilson's cavalry were raiding in the vicinity. In the confusion in the night the scouts escaped. In leaving they saw what led them to suspect that preparations had been made for hanging them as spies. They made good time the rest of that night. In the morning they saw four horses saddled and tied to a fence near a house. They cautiously drew near, untied the horses, mounted and were off. They were cavalrymen's horses, with pistols in holsters. At Rude's Hill the men saw that they were followed by a squad of horsemen. The bridge east of the Meem bottom was gone. The river was swollen and swift, but they had to swim it. Stern's horse was carried down stream and drowned, but his comrades helped Stern over. They reached Winchester safely.

After a rest they were given new suits and fresh horses and started out again. With many fast rides and narrow escapes they, in their trip of 150 miles, overtook Sheridan in the vicinity of Richmond.

At Charlottesville some of the men, who were practical printers, took possession of a printing office and issued a special edition, advertising, with the old-time cuts of runaway slaves, offering large rewards for the finding and return of "My boy Jube," and "My man Rosser" [i.e., Confederate generals Jubal Early and Thomas Rosser].

Captain O'Brien, provost marshal of the division, captured among other things, a lot of correspondence among Confederate officers of high rank. These letters indicated anything but harmony among the writers. They contained spicy accusations of inefficiency.

The prisoners had been sent back under guard to Winchester. Now Sheridan's hands were free for new work 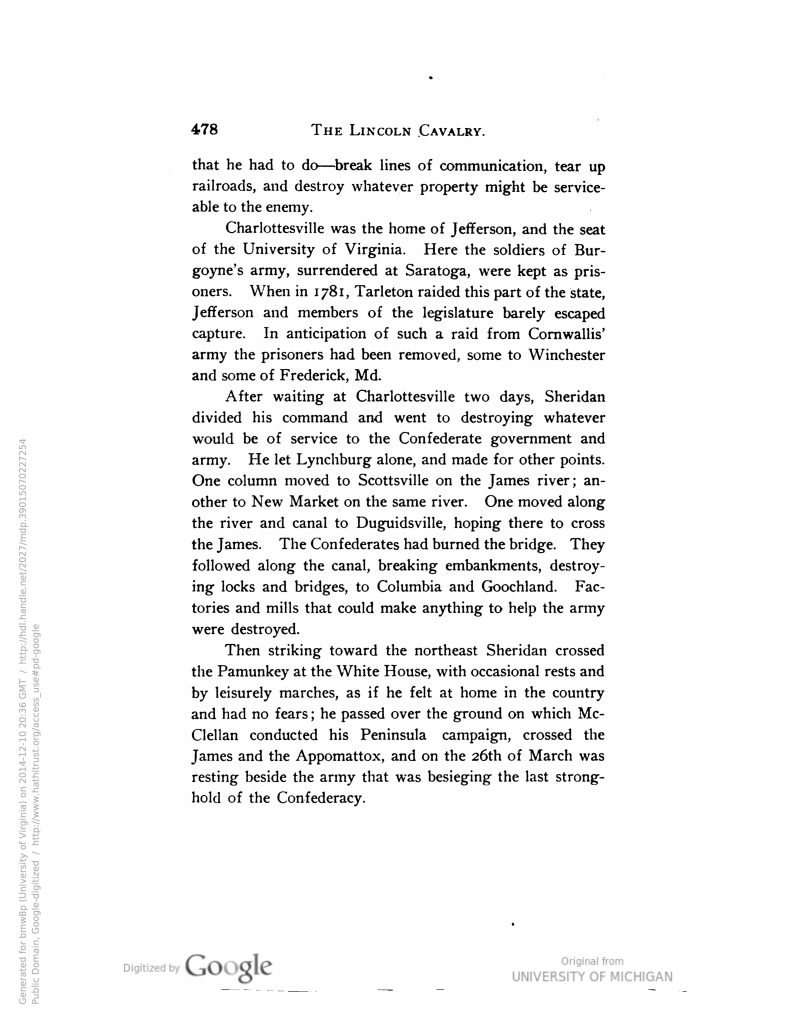 that he had to do—break lines of communication, tear up railroads, and destroy whatever property might be serviceable to the enemy.

Charlottesville was the home of [Thomas] Jefferson, and the seat of the University of Virginia. Here the soldiers of [John] Burgoyne's army, surrendered at Saratoga, were kept as prisoners. When in 1781, [Sir Banastre] Tarleton raided this part of the state, Jefferson and members of the legislature barely escaped capture. In anticipation of such a raid from [Lord] Cornwallis' army the prisoners had been removed, some to Winchester and some of Frederick, Md.

After waiting at Charlottesville two days, Sheridan divided his command and went to destroying whatever would be of service to the Confederate government and army. He let Lynchburg alone, and made for other points. One column moved to Scottsville on the James river; another to NewMarket on the same river. One moved along the river and canal to Duguidsville, hoping there to cross the James. The Confederates had burned the bridge. They followed along the canal, breaking embankments, destroying locks and bridges, to Columbia and Goochland. Factories and mills that could make anything to help the army were destroyed.

Then striking toward the northeast Sheridan crossed the Pamunkey at the White House, with occasional rests and by leisurely marches, as if he felt at home in the country and had no fears; he passed over the ground on which McClellan conducted his Peninsula campaign, crossed the James and the Appomattox, and on the 26th of March was resting beside the army that was besieging the last stronghold of the Confederacy.