A city settled by Quakers on land opened up by the French and Indian War (1755–1763), Lynchburg had a population in 1860 of 6,853, including 3,802 free whites, 357 free blacks, and 2,694 enslaved African Americans. A leading center for the manufacture and sale of plug, or chewing, tobacco, Lynchburg enjoyed wealth, national prestige, and an abiding appreciation for industrial enterprise. Indeed, the community’s economic orientation inspired one visitor to comment that Lynchburg had “more the appearance of a Yankee town than any other in Virginia.” Appearances can be deceptive, however. Lynchburg’s tobacco “factories,” for instance, were typically Southern in that they used only rudimentary technology and depended on enslaved labor for most of the work. In addition, factory owners and other civic leaders modeled themselves not after the industrial managers of the North but after planter patriarchs of the countryside, treating both enslaved workers and less wealthy local citizens accordingly.

If Lynchburg did not operate in the image of the “Yankee” North, it was nevertheless dependent on it for trade. For this reason, most of the city’s white residents were decidedly Unionist and skeptical that secession would be in their best economic interests. In this respect, they were like much of Virginia, whose secession convention for months stubbornly delayed taking action. After the firing on Fort Sumter in April 1861 and U.S. president Abraham Lincoln’s call for 75,000 volunteers to put down the rebellion, however, the delegates in Richmond finally voted to leave the Union. The following month, Lynchburg unanimously voiced its approval in a statewide referendum. 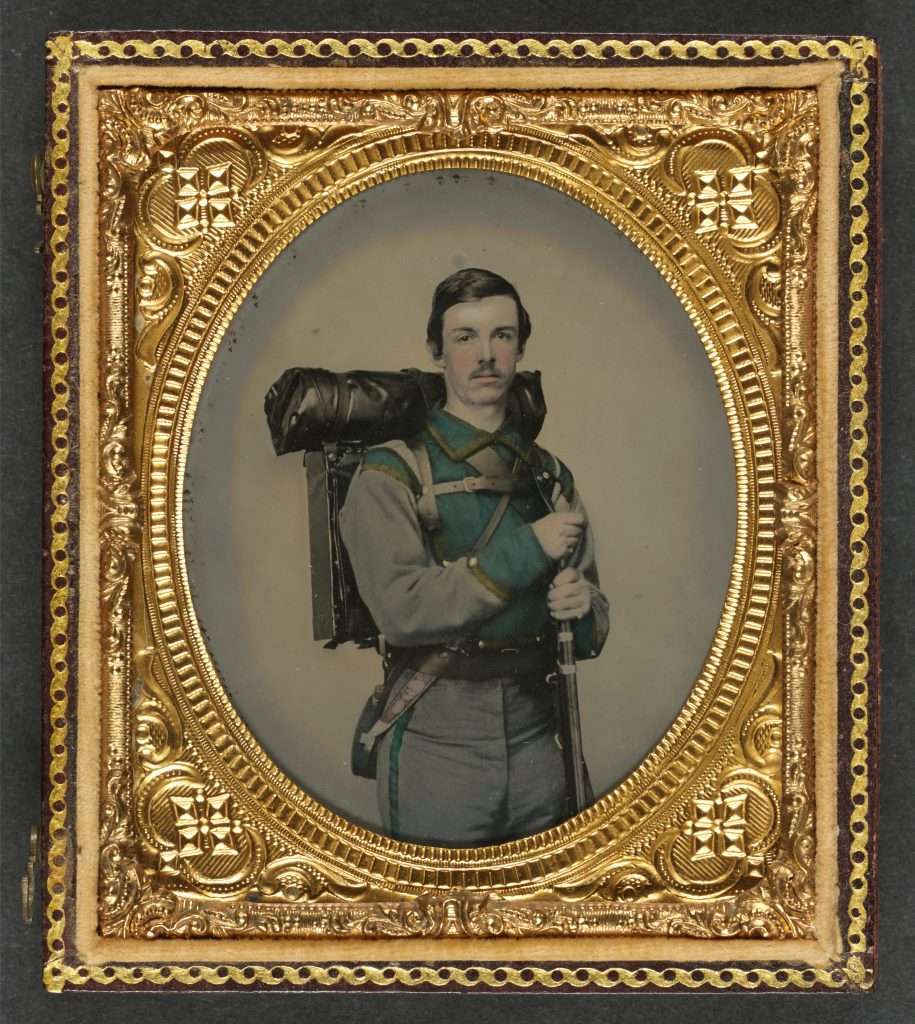 During the early months of the war, the city’s men joined the Confederate army or the newly formed Home Guard, while its women created a variety of support organizations, most notably the Ladies’ Relief Society and the Ladies’ Relief Hospital. The latter became one of the largest women-run hospitals in the Confederacy, a place where Lynchburg’s most prominent women assumed the role of matrons and supervised a legion of hired nurses and slaves. The Confederate military, meanwhile, quickly realized that Lynchburg’s location—close to major theaters of battle but still out of harm’s way—and access to major transportation routes made it an ideal spot for hospitals and supplies. Eventually, however, the city’s strategic usefulness became a burden, severely taxing its resources and leading to controversy, conflict, and disillusionment.

The Long Years of War 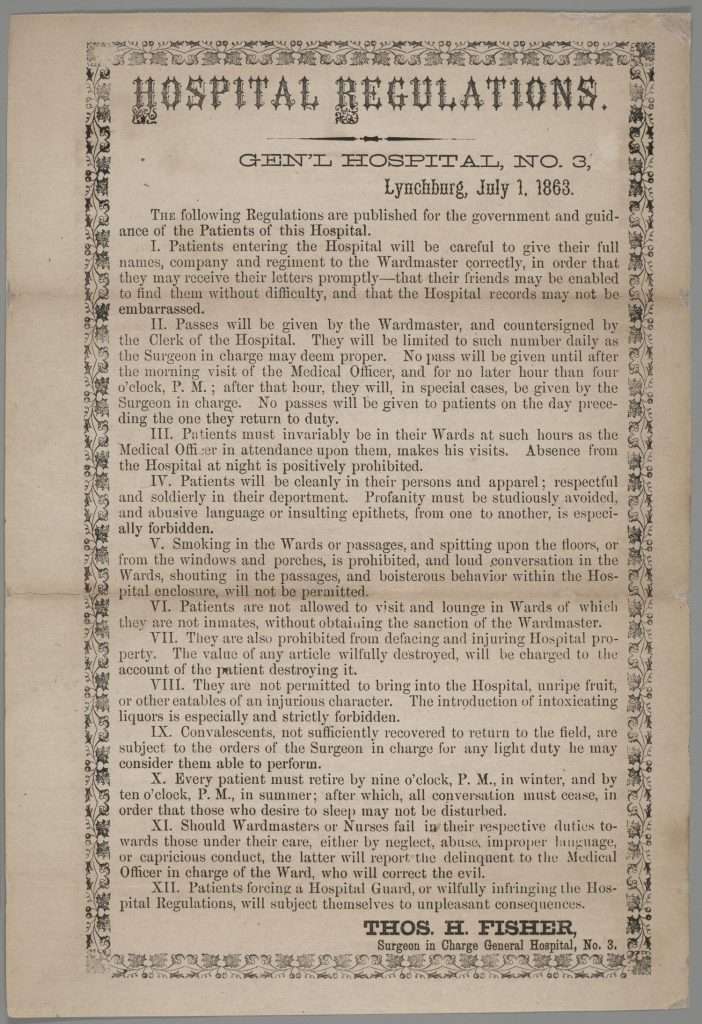 Enthusiasm for war withered as citizens came to believe that they were being asked to sacrifice too much. Civic leaders hoped that crisis might galvanize their authority while uniting the city against a common enemy. Neither occurred. Instead, the city’s elected officials proved themselves to be incompetent, and the community began to disintegrate in ways typical of other cities in the South. For instance, residents—echoing claims to personal liberty that were important to the Confederacy’s founding ideology of states’ rights—complained that the state and national governments made too many demands on their persons and their property.

In April 1862, Confederate president Jefferson Davis authorized a military draft, and resistance to this and the impressment of resources became not only common but also accepted practices. In addition, city residents came to resent the many soldiers who congregated in Lynchburg, blaming them for the rising crime rate and acts of public disorder. Inflation and supply shortages caused claims and counterclaims of speculating, price gouging, and hoarding. The poor suffered miserably, and bread riots that plagued other Southern cities were avoided only because civic leaders donated enough food to maintain some semblance of order.

For Lynchburg’s enslaved African Americans, the war meant both extreme suffering and greater autonomy. On the one hand, many enslaved African Americans who had been hired by tobacco factories were either conscripted into the military as common laborers or were left to fend for themselves because they were either too old or too feeble to help the war effort. At the same time, the lack of direct supervision and the preoccupation with the war effort enabled some enterprising slaves to expand the notorious gray market—the tradition of slaves selling stolen goods to even poorer whites—or to run away to the Union lines.

The Battle of Lynchburg on June 17, 1864, briefly restored the city’s unity as residents prepared to fend off the forces of Union general David Hunter, who had been charged by Ulysses S. Grant to destroy the canal and railroads at Lynchburg. Confederate troops under the command of Jubal A. Early drove Hunter off, and while his attack had momentarily distracted Lee from his defense of Richmond, his retreat ceded control of the Shenandoah Valley back to the Confederates. 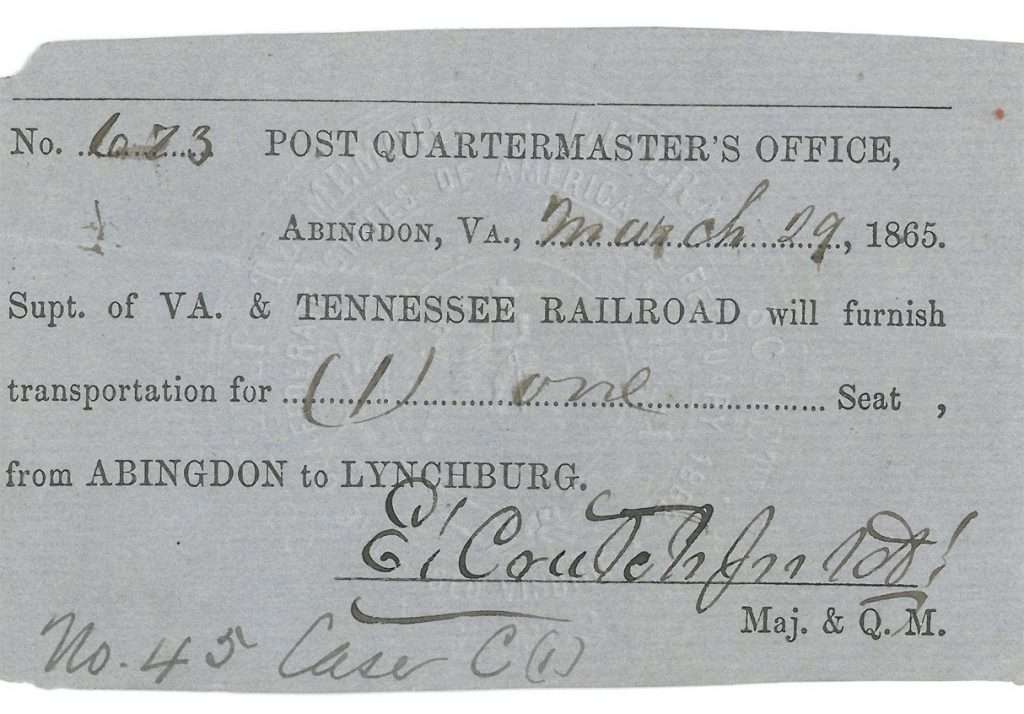 With Hunter gone, however, internal conflict returned. By late in 1864, most residents were ready to give up the fight in hopes that peace would mean a return to prosperity. The state government relocated to Lynchburg April 6–10, 1865, but by then it was unclear whether the Confederate government would have been welcome. When Union forces chased renegade remnants of Lee’s Army of Northern Virginia into the town shortly after the Confederate surrender on April 9, they found a city on the verge of chaos and civic leaders who were eager to make peace. Initially, many residents joined African Americans in welcoming the defeat of the Confederacy. In time, however, Reconstruction (1865–1877) would further divide the town along lines of race and class.

RELATED CONTENT
Categories:
MAP
TIMELINE
1757
Lynchburg is founded when John Lynch establishes a ferry service along the banks of the James River.
1860
Lynchburg has a population of 6,853, including 3,802 free whites, 357 free blacks, and 2,694 enslaved African Americans.
May 23, 1861
Lynchburg unanimously voices its approval to leave the Union in a statewide referendum.
June 17, 1864
During the Battle of Lynchburg, Confederate troops under the command of Jubal A. Early drive off the forces of Union general David Hunter, whose retreat cedes control of the Shenandoah Valley back to the Confederates.
April 6—10, 1865
The state government relocates to Lynchburg. When Union forces chase renegade remnants of Robert E. Lee's Army of Northern Virginia into the town shortly after the Confederate surrender on April 9, they find a city on the verge of chaos and civic leaders who are eager to make peace.
FURTHER READING
CITE THIS ENTRY