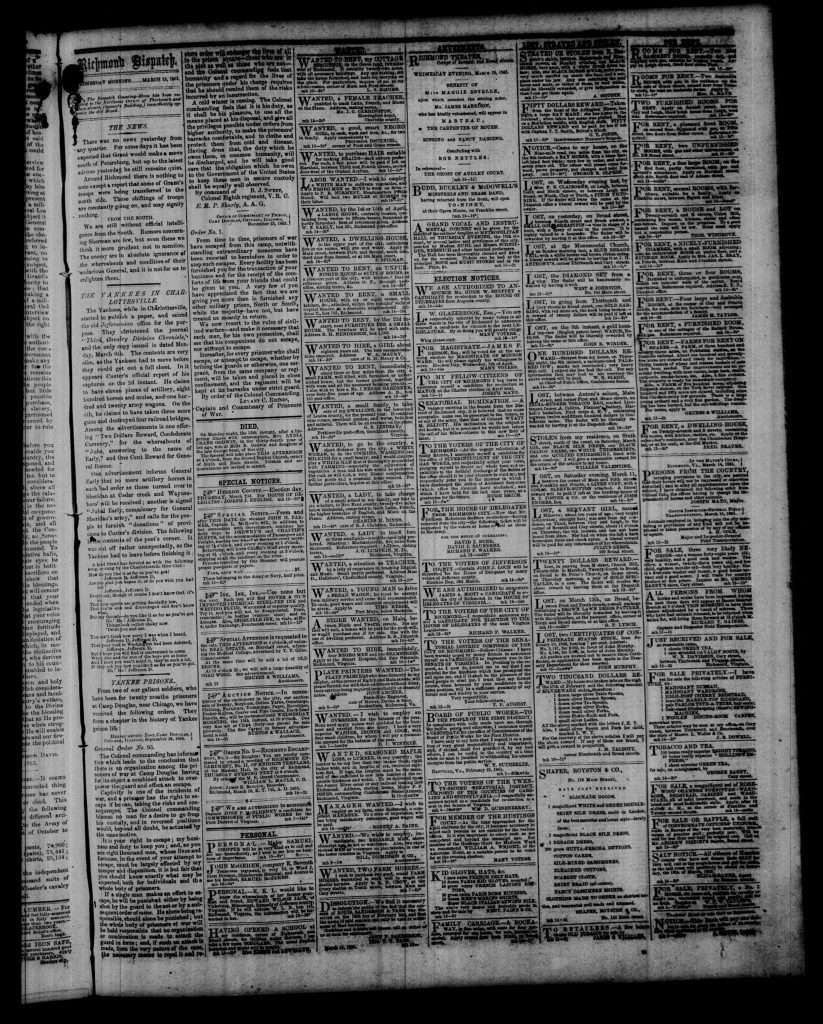 The Yankees, while in Charlottesville, started to publish a paper, and seized the old Jeffersonian office for the purpose. They christened the journal "Third Cavalry Division Chronicle," and the only copy issued is dated Monday, March 6th. The contents are very slim, as the Yankees had to move before they could get out a full sheet. In it appears [Union general George Armstrong] Custer's official report of his captures on the 2d instant. He claims to have eleven pieces of artillery, eight hundred horses and mules, and one hundred and twenty army wagons. On the 4th, he claims to have taken three more guns and destroyed four railroad bridges. Among the advertisements is one offering "Two Dollars Reward, Confederate Currency," for the whereabouts of "Jube, answering to the name of Early," [i.e., Confederate general Jubal A. Early] and One Cent Reward for General [Thomas L.] Rosser.

One advertisement informs General Early that no more artillery horses in such bad order as those turned over to Sheridan at Cedar creek and Waynesboro' will be received; another is signed "Jubal Early, commissary for General Sheridan's army," and calls for the people to furnish "donations" of provisions to Custer's division. The following is the contents of the poet's corner. It was cut off rather unexpectedly, as the Yankees had to leave before finishing it:

A kind friend has favored us with the following song, as sung by the Charlottesville Glee Club:

How do you like it as far as you've got?

Are you glad you began it, or do you wish you had not?

People say, though of course I don't know that it's so,

That your spirits are getting decidedly low,

That you're sick and discouraged and don't know what,

But say though — do you like it as far as you've got.

'Twixt you and me.

You can't think how sorry I was when I heard,

That your visit to Washington had been deferred,

But I hope you will find it convenient to come

When Abe and the rest of the boys are at home

And I trust you won't mind it, they're such a lot,

If they ask you how you like it as far as you've got.