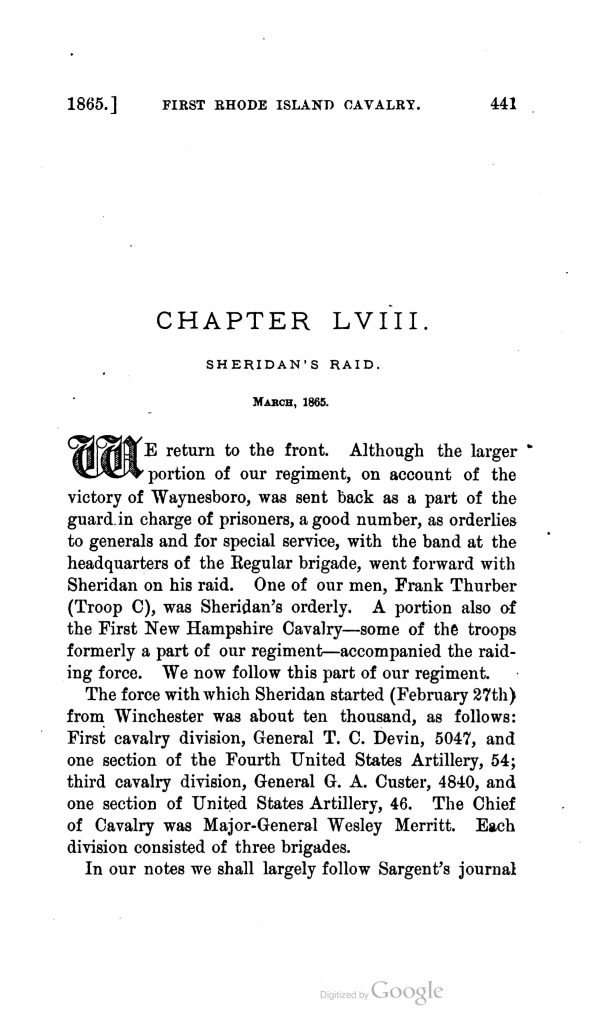 Sabres and Spurs: The First Rhode Island Cavalry in the Civil War, Page 441

We return to the front. Although the larger portion of our regiment, on account of the victory of Waynesboro, was sent back as a part of the guard in charge of prisoners, a good number, as orderlies to generals and for special service, with the band at the headquarters of the Regular brigade, went forward with [Philip] Sheridan on his raid. One of our men, Frank Thurber (Troop C), was Sheridan's orderly. A portion also of the First New Hampshire Cavalry—some of the troops formerly a part of our regiment—accompanied the raiding force. We now follow this part of our regiment.

The force with which Sheridan started (February 27th) from Winchester was about ten thousand, as follows: First cavalry division, General T. C. Devin, 5047, and one section of the Fourth United States Artillery, 54; third cavalry division, General G. A. Custer, 4840, and one section of United States Artillery, 46. The Chief of Cavalry was Major-General Wesley Merritt. Each division consisted of three brigades.

In our notes we shall largely follow Sargent's journal 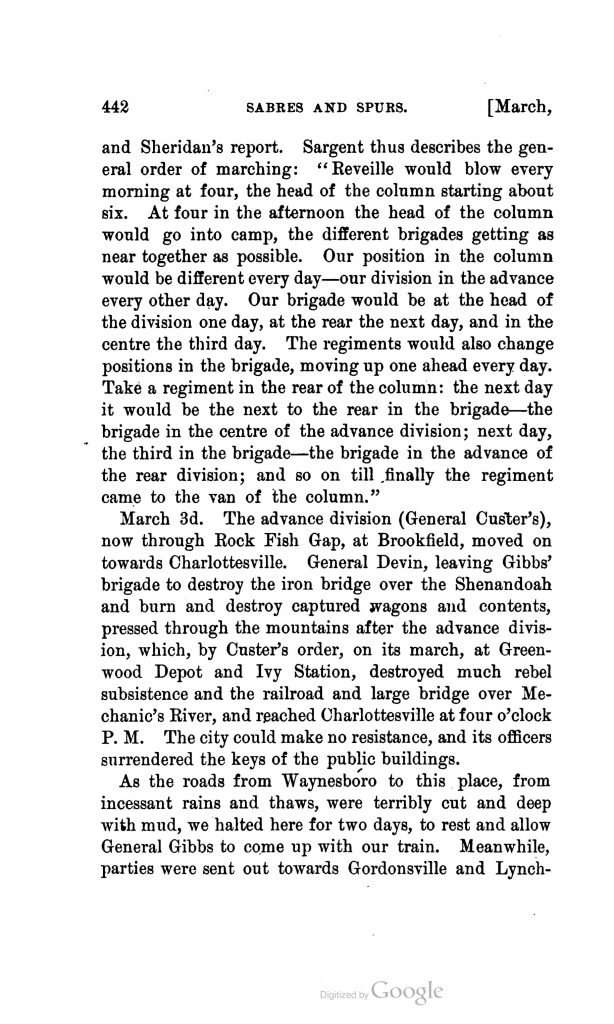 Sabres and Spurs: The First Rhode Island Cavalry in the Civil War, Page 442

March 3d. The advance division (General Custer's), now through Rock Fish Gap, at Brookfield, moved on towards Charlottesville. General [Thomas E.] Devin, leaving [Alfred] Gibbs' brigade to destroy the iron bridge over the Shenandoah and burn and destroy captured wagons and contents, pressed through the mountains after the advance division, which, by Custer's order, on its march, at Greenwood Depot and Ivy Station, destroyed much rebel subsistence and the railroad and large bridge over Mechanic's River, and reached Charlottesville at four o'clock P. M. The city could make no resistance, and its officers surrendered the keys of the public buildings.

As the roads from Waynesboro to this place, from incessant rains and thaws, were terribly cut and deep with mud, we halted here for two days, to rest and allow General Gibbs to come up with our train. Meanwhile, parties were sent out towards Gordonsville and Lynch- 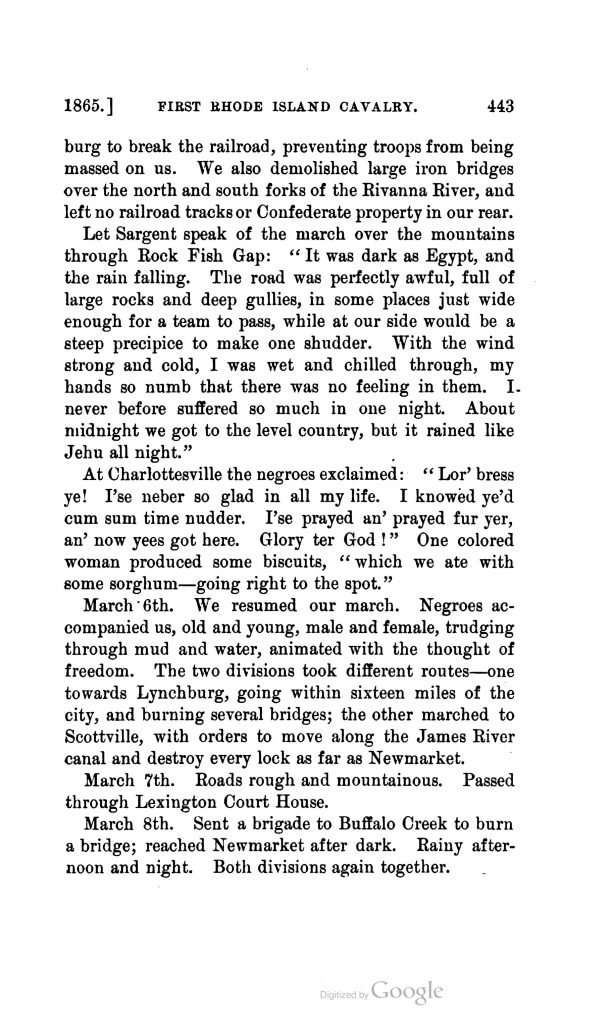 Sabres and Spurs: The First Rhode Island Cavalry in the Civil War, Page 443

burg to break the railroad, preventing troops from being massed on us. We also demolished large iron bridges over the north and south forks of the Rivanna River, and left no railroad tracks or Confederate property in our rear.

Let Sargent speak of the march over the mountains through Rock Fish Gap: "It was dark as Egypt, and the rain falling. The road was perfectly awful, full of large rocks and deep gullies, in some places just wide enough for a team to pass, while at our side would be a steep precipice to make one shudder. With the wind strong and cold, I was wet and chilled through, my hands so numb that there was no feeling in them. I. never before suffered so much in one night. About midnight we got to the level country, but it rained like Jehu all night."

March 6th. We resumed our march. Negroes accompanied us, old and young, male and female, trudging through mud and water, animated with the thought of freedom. The two divisions took different routes—one towards Lynchburg, going within sixteen miles of the city, and burning several bridges; the other marched to Scott[s]ville, with orders to move along the James River canal and destroy every lock as far as Newmarket.

March 8th. Sent a brigade to Buffalo Creek to burn a bridge; reached Newmarket after dark. Rainy afternoon and night. Both divisions again together. 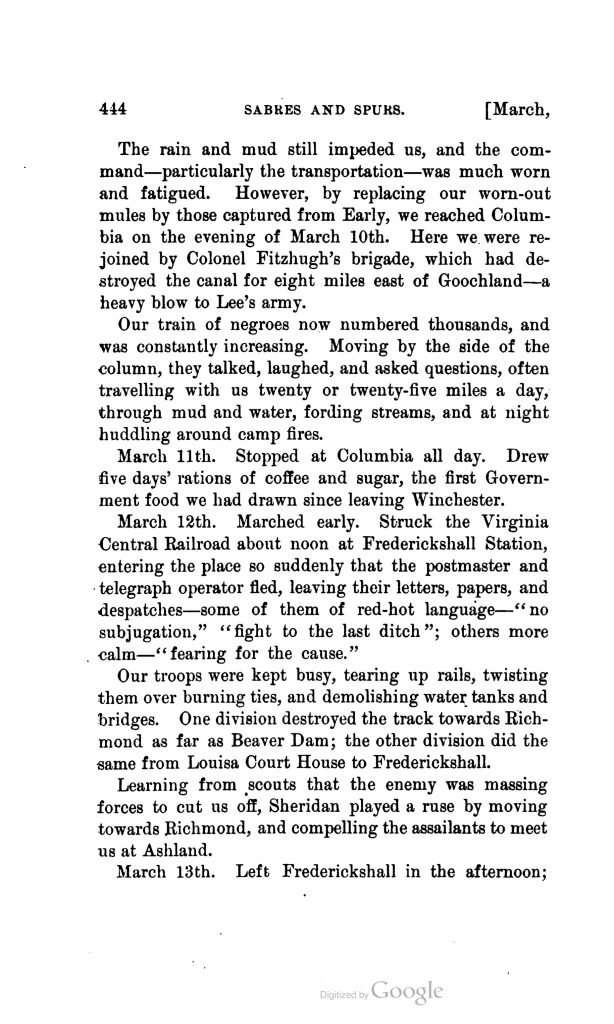 Sabres and Spurs: The First Rhode Island Cavalry in the Civil War, Page 444

The rain and mud still impeded us, and the command—particularly the transportation—was much worn and fatigued. However, by replacing our worn-out mules by those captured from [Confederate general Jubal A.] Early, we reached Columbia on the evening of March 10th. Here we were rejoined by Colonel [Charles L.] Fitzhugh's brigade, which had destroyed the canal for eight miles east of Goochland—a heavy blow to [Confederate general Robert E.] Lee's army.

Our train of negroes now numbered thousands, and was constantly increasing. Moving by the side of the column, they talked, laughed, and asked questions, often travelling with us twenty or twenty-five miles a day, through mud and water, fording streams, and at night huddling around camp fires.

RELATED CONTENT
Categories:
Type:
MAP
TIMELINE
1876
Sabres and Spurs by the Rev. Frederic Denison, a history of the 1st Rhode Island Cavalry in the Civil War, is published.
FURTHER READING