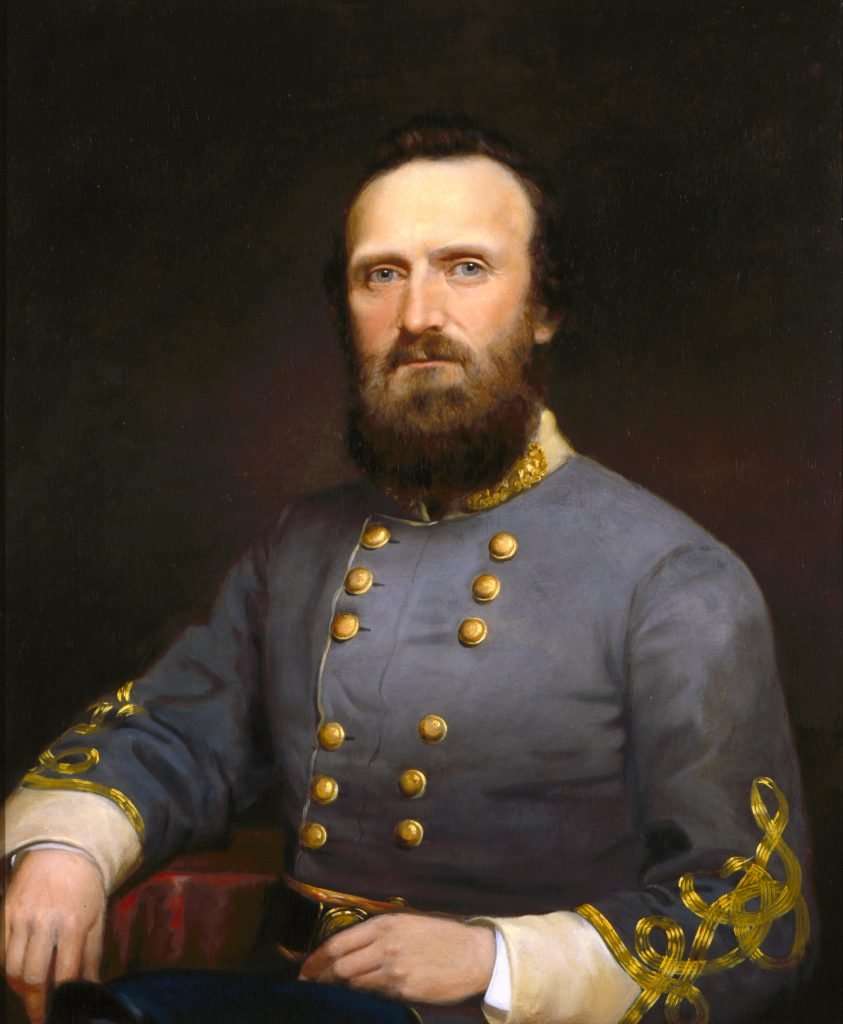 Technically speaking, the Shenandoah Valley is the northern part of the Great Valley of Virginia, approximately a 140-mile corridor extending north from Rockbridge County to the Potomac River. The valley lies between the Blue Ridge Mountains on the east and the Alleghenies on the west, its breadth never wider than twenty-five miles. The forks of the Shenandoah River flow northward to join above Massanutten Mountain—a massive topographical feature that divides the Valley and dominates its landscape—and then move as one to a splendorous junction with the Potomac River at Harpers Ferry.

By 1860, and thanks in part to antebellum travel and adventure literature, plantation fiction, and romantic landscape art, the Shenandoah Valley was already a unique and “Southern” place in popular imagination. Its associations were arcadian: admirers called it a place of unrivaled beauty, pastoral tranquility, and plenteous abundance. Those associations were given vital force in the war’s early years by the exploits of such Confederate heroes as Thomas J. “Stonewall” Jackson and Turner Ashby; in fact, one historian has suggested that the Valley possessed a revitalizing power for Confederate soldiers and civilians alike.

Despite its Confederate identity, however, the Shenandoah Valley was home to a substantial number of reluctant secessionists before the war, as well as a considerable population of Unionists, pacifists, and free blacks during the conflict. The divisions—which centered on political and economic factors, long-simmering intrastate jealously, and the uneven distribution of slavery in the region—make any generalization a tenuous one. 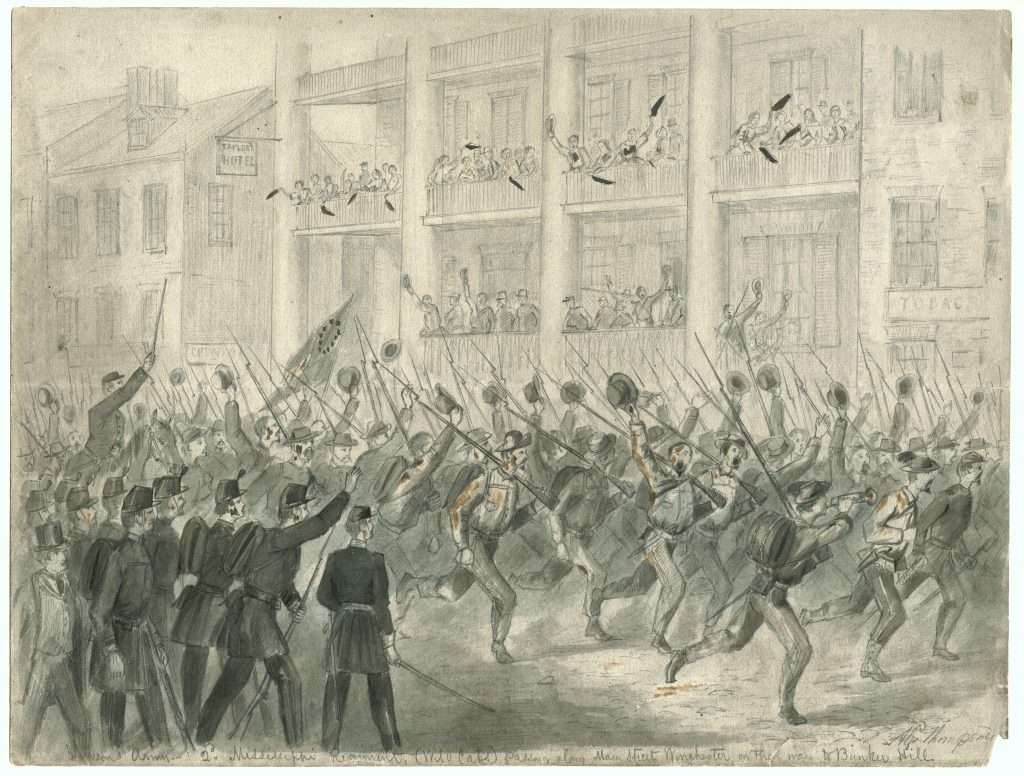 The Valley’s fissures would eventually be manifested in several illuminating ways that not only called forth the contradictions in its idyllic identity, but paradoxically may have fed and energized them: an ongoing partisan war that occasionally devolved into brutish guerrilla warfare; the breakdown of key political and social institutions; a debilitating mistrust among erstwhile neighbors; and plethoric incidents of theft, arson, intimidation, and murder. Winchester, at the head of the Valley and the Shenandoah’s most important town, was said to have changed hands more than seventy times. Indeed, the Valley’s two northernmost counties, Berkeley and Jefferson—the former’s seat, Martinsburg, was a bastion of Union sentiment; the latter, heavily Confederate and the self-proclaimed “Garden Spot of Virginia”—were detached in 1863 and subsequently shoe-horned into the new state of West Virginia.

central Virginia, the Shenandoah provided the Union high command with a potential back-door route into Richmond, the Confederate capital, while it circumvented the obstacles that were Virginia’s eastern rivers. Further, to hold the valley was to bottle up and contain the Confederate Army of Northern Virginia. (Broadening the map broadened the Valley’s importance: it could be used as a staging area into Unionist east Tennessee, always a priority for Lincoln.)

Those advantages transposed Confederate ones. Because the Valley’s direction is generally southwest to northeast, it pointed dagger-like at the North and especially at Washington, D.C., only sixty miles from Harpers Ferry. For the Confederates, to control it was to control a pressure point, a natural and physically protected invasion route northward. It was precisely this advantage that Jackson so aggressively seized in the Valley Campaign of 1862, in which his small army exploited the landscape to flummox more than 60,000 Union troops, threaten invasion and the U.S. capital, and thereby harass and stall the Union effort to capture Richmond.

On two other notable occasions, the Gettysburg Campaign of 1863 and Jubal A. Early’s raid on Washington in 1864, Confederates used the Valley to undertake offensive operations in the North. Further, as the so-called “Granary of the Confederacy”—the name suggests the increasingly powerful linkage between antebellum pastoral imagery and Confederate nationalism—the Shenandoah’s abundance supplied wheat, corn, meat, and especially draft animals to the Confederate war effort.

Stymied by ill-starred commanders and an uncoordinated grand strategy, the Union high command was slow to use its advantages. Finally, and in part because the Shenandoah had become what one scholar called an “iconic Confederate place,” the Union chose to take away enemy advantages rather than claim its own. This decision played out spasmodically, in stages, as the larger Valley Campaign of 1864 unfolded.

On May 15, 1864, a small Confederate force that included 257 cadets from the Virginia Military Institute in Lexington turned back the first Union offensive of the spring by defeating Union general Franz Sigel at the Battle of New Market. A second Union army under David Hunter succeeded in moving up the Valley all the way to Lexington, where on June 12 Hunter burned VMI as well as the home of former Virginia governor John Letcher.

Hunter, opposed in his front by a Confederate force under Early sent from Petersburg to stop him and from behind by ravenous partisans and guerrillas who disrupted his supply lines, chose to leave the valley and retreat into West Virginia. That movement reopened the Shenandoah Valley to Confederate control and made possible Early’s raid on Washington in July. Early’s movement, though unsustainable, brought to a head three summers of frustration in the Union high command and set the stage for a climatic, fiery autumn of holocaust.

The Burning and the Historians 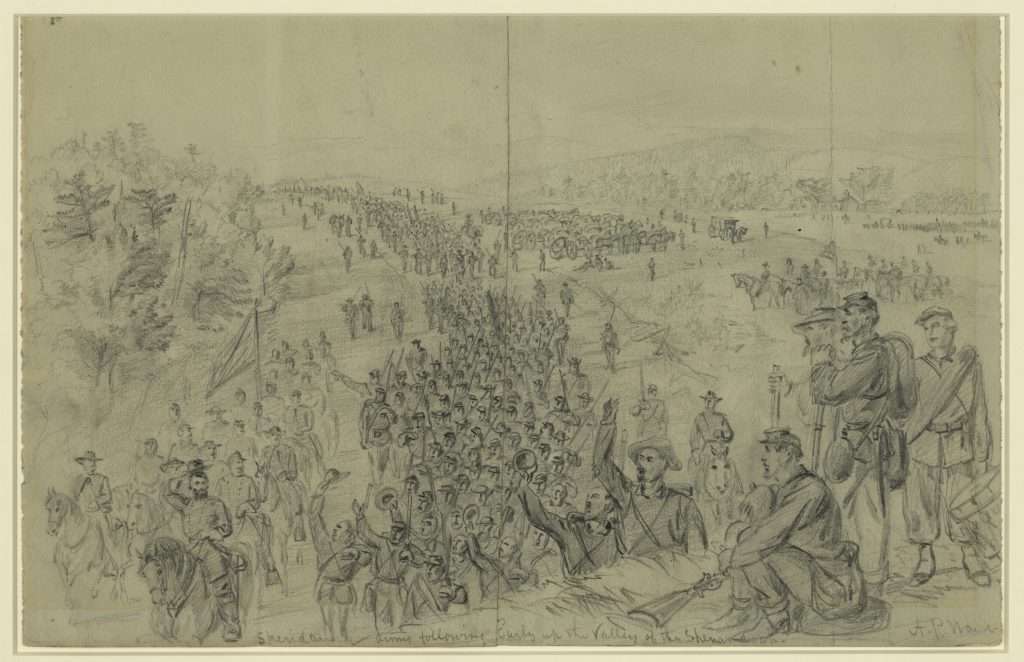 The Burning was carried out by Union general Sheridan, who replaced Hunter in August with orders to “follow [Early] to the death.” Sheridan defeated Early at the Third Battle of Winchester and at Fisher’s Hill in September and then embarked on a war against the land. Taking heed of Ulysses S. Grant‘s mandate to make the Shenandoah Valley so desolate that crows flying over it would have to carry their own provender, Sheridan claimed to have slaughtered thousands of sheep, hogs, and cattle and laid in ashes “2,000 barns filled with wheat, hay, and farming implements [and] over seventy mills filled with flour and wheat.”

The devastation followed a line of forty miles between Harrisonburg in Rockingham County to Woodstock in Shenandoah County and accomplished first in Virginia what William T. Sherman would later accomplish in Georgia: by waging a so-called hard war on the land, a war in which it was undeniably apparent that the Confederacy could not stop him, Sheridan scorched the material and emotional heart of the Confederacy. Early’s attempt to prove otherwise failed spectacularly at the Battle of Cedar Creek on October 19, 1864, an emphatic, demoralizing Confederate defeat and the last major military operation in the valley until the close of the war.

Historians disagree about the truth of Sheridan’s assertions. At a basic level, some argue that Sheridan did not destroy as much as he claimed to have destroyed; to these scholars, his assertions were one measure propaganda and two dollops personal promotion. Others insist that the Shenandoah Valley’s abundance has been exaggerated—and thus the importance of the Burning has been exaggerated as well. According to this thesis, the 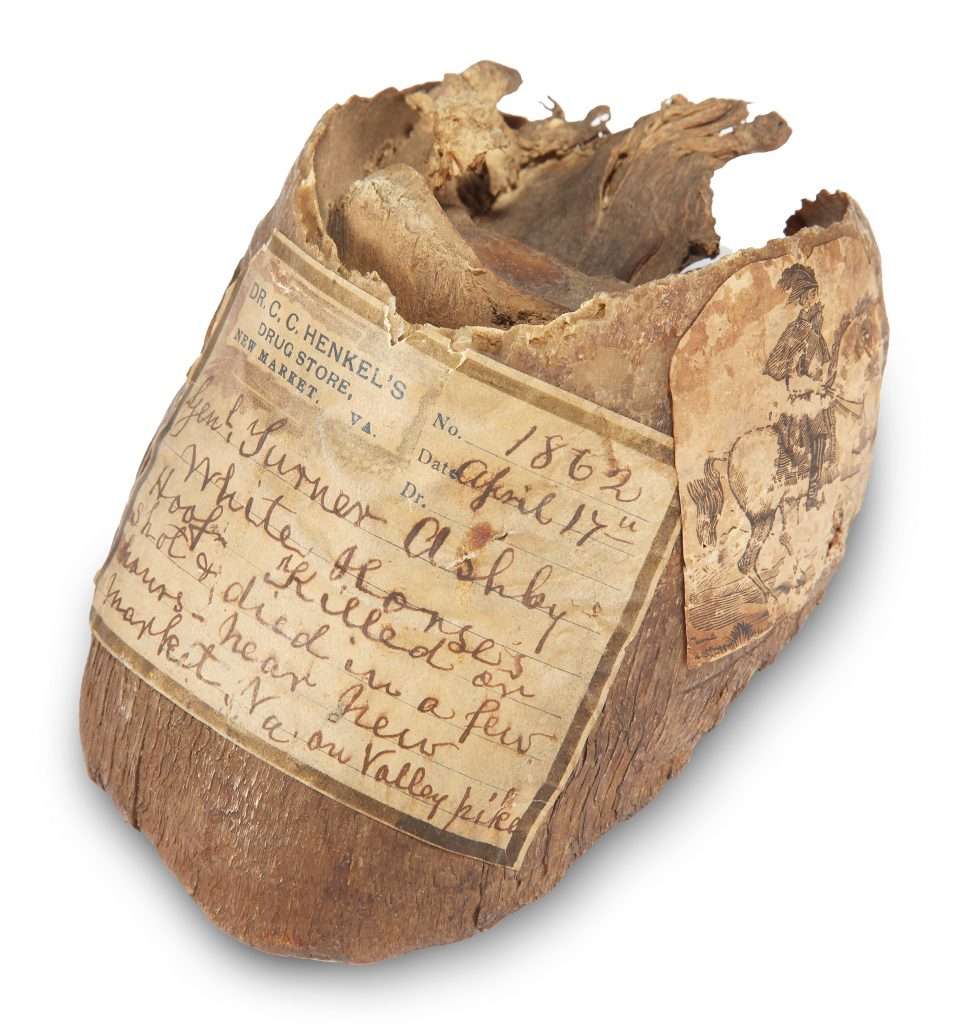 “Granary of the Confederacy” was largely stripped of its resources by late 1862. Still others, seeking to understand Sheridan’s campaign as part of a larger effort to frame the scale and character of the war, argue that his effort was not wanton waste-laying but specific, targeted, and controlled. Hence, to them, neither the Burning nor the war itself was “total” or even “brutal.”

Those who lived through the Burning—those who experienced it as well as many of those who carried it out—tended to think in terms that mock contemporary historical controversy. Not only was the Burning understood as a culminating climax to a brutalizing war, it was understood that way precisely because the mythic, arcadian identity of the Shenandoah Valley had taken such deep root. Moreover, the wartime experience in the Shenandoah Valley had generated an intense if uneasy nationalism that tied these idyllic ideas of home and place to the Confederate war effort. In many ways the Burning succeeded in destroying those material ties only to see them endure spiritually in folklore and memory.