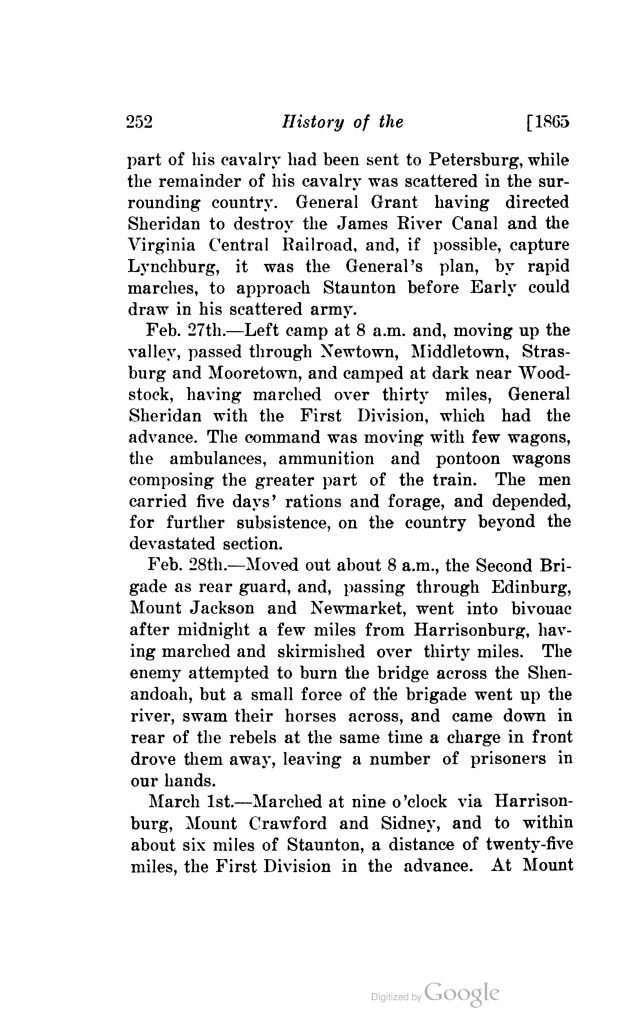 March 1st.—Marched at nine o'clock via Harrisonburg, Mount Crawford and Sidney, and to within about six miles of Staunton, a distance of twenty-five miles, the First Division in the advance. At Mount 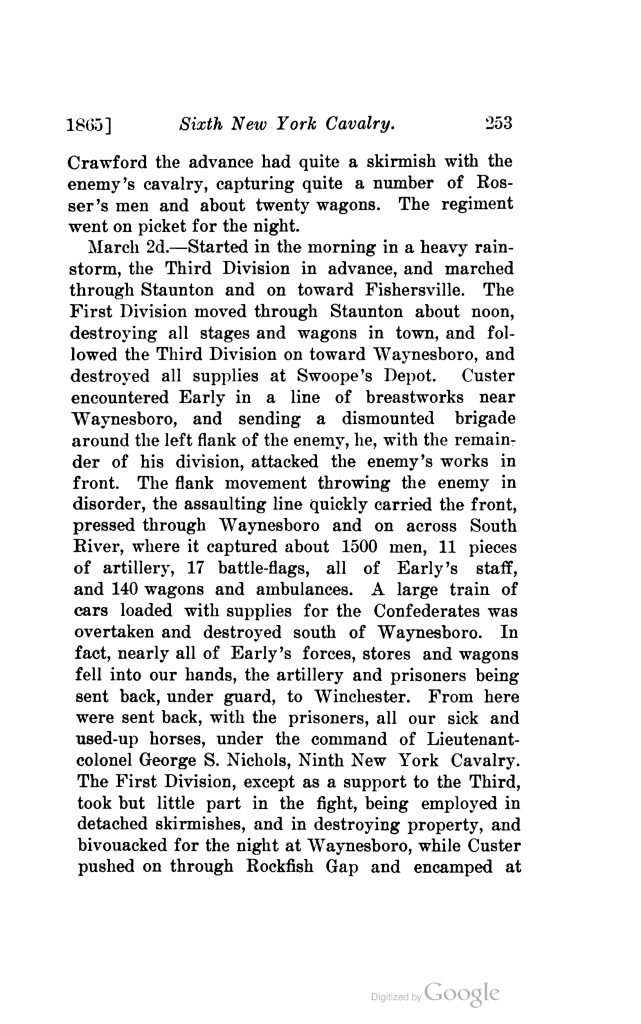 Crawford the advance had quite a skirmish with the enemy's cavalry, capturing quite a number of [Confederate general Thomas L.] Rosser's men and about twenty wagons. The regiment went on picket for the night.

March 2d.—Started in the morning in a heavy rainstorm, the Third Division in advance, and marched through Staunton and on toward Fishersville. The First Division moved through Staunton about noon, destroying all stages and wagons in town, and followed the Third Division on toward Waynesboro, and destroyed all supplies at Swoope's Depot. [Union general George Armstrong] Custer encountered [Confederate general Jubal A.] Early in a line of breastworks near Waynesboro, and sending a dismounted brigade around the left flank of the enemy, he, with the remainder of his division, attacked the enemy's works in front. The flank movement throwing the enemy in disorder, the assaulting line quickly carried the front, pressed through Waynesboro and on across South River, where it captured about 1500 men, 11 pieces of artillery, 17 battle-flags, all of Early's staff, and 140 wagons and ambulances. A large train of cars loaded with supplies for the Confederates was overtaken and destroyed south of Waynesboro. In fact, nearly all of Early's forces, stores and wagons fell into our hands, the artillery and prisoners being sent back, under guard, to Winchester. From here were sent back, with the prisoners, all our sick and used-up horses, under the command of Lieutenant colonel George S. Nichols, Ninth New York Cavalry. The First Division, except as a support to the Third, took but little part in the fight, being employed in detached skirmishes, and in destroying property, and bivouacked for the night at Waynesboro, while Custer pushed on through Rockfish Gap and encamped at 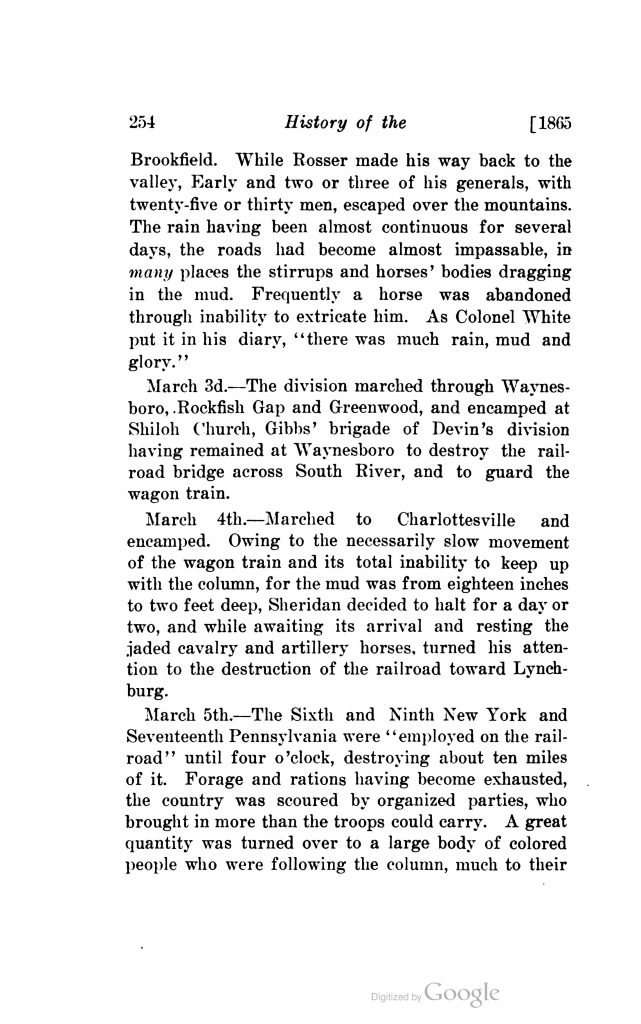 Brookfield. While Rosser made his way back to the [Shenandoah] valley, Early and two or three of his generals, with twenty-five or thirty men, escaped over the [Blue Ridge] mountains. The rain having been almost continuous for several days, the roads had become almost impassable, in many places the stirrups and horses' bodies dragging in the mud. Frequently a horse was abandoned through inability to extricate him. As Colonel White put it in his diary, "there was much rain, mud and glory."

March 3d.—The division marched through Waynesboro, Rockfish Gap and Greenwood, and encamped at Shiloh Church, [Alfred] Gibbs' brigade of [Thomas E.] Devin's division having remained at Waynesboro to destroy the railroad bridge across South River, and to guard the wagon train.

March 4th.—Marched to Charlottesville and encamped. Owing to the necessarily slow movement of the wagon train and its total inability to keep up with the column, for the mud was from eighteen inches to two feet deep, Sheridan decided to halt for a day or two, and while awaiting its arrival and resting the jaded cavalry and artillery horses, turned his attention to the destruction of the railroad toward LynchburgCW.

March 5th.—The Sixth and Ninth New York and Seventeenth Pennsylvania were "employed on the railroad" until four o'clock, destroying about ten miles of it. Forage and rations having become exhausted, the country was scoured by organized parties, who brought in more than the troops could carry. A great quantity was turned over to a large body of colored people who were following the column, much to their 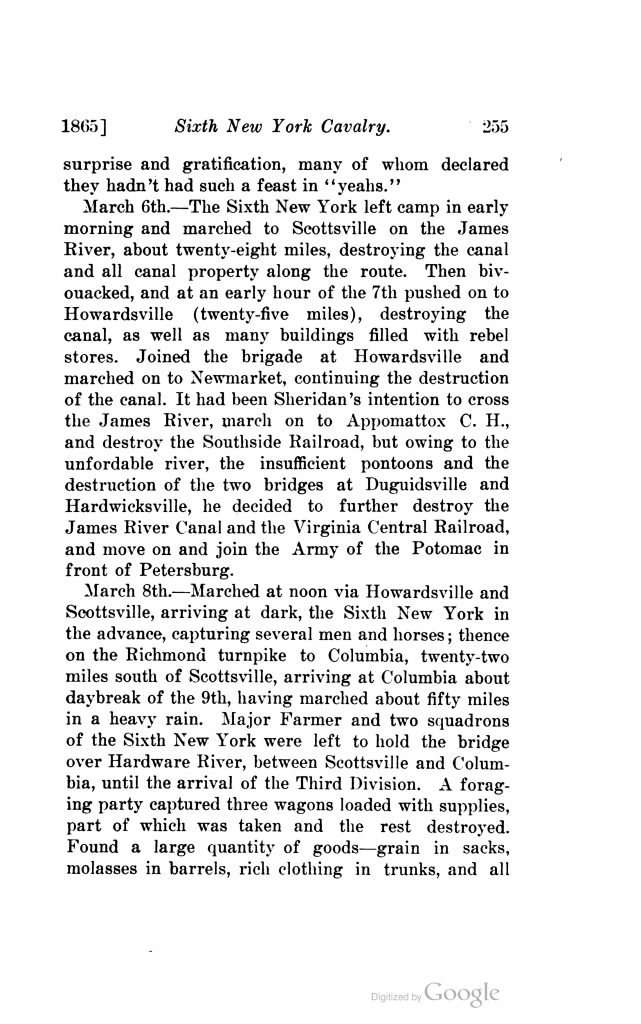 surprise and gratification, many of whom declared they hadn't had such a feast in ''yeahs.''

March 6th.—The Sixth New York left camp in early morning and marched to Scottsville on the James River, about twenty-eight miles, destroying the canal and all canal property along the route. Then bivouacked, and at an early hour of the 7th pushed on to Howardsville (twenty-five miles), destroying the canal, as well as many buildings filled with rebel stores. Joined the brigade at Howardsville and marched on to Newmarket, continuing the destruction of the canal. It had been Sheridan's intention to cross the James River, march on to Appomattox C. H., and destroy the Southside Railroad, but owing to the unfordable river, the insufficient pontoons and the destruction of the two bridges at Duguidsville and Hardwicksville, he decided to further destroy the James River Canal and the Virginia Central Railroad, and move on and join the Army of the Potomac in front of Petersburg.

March 8th.—Marched at noon via Howardsville and Scottsville, arriving at dark, the Sixth New York in the advance, capturing several men and horses; thence on the Richmond turnpike to Columbia, twenty-two miles south of Scottsville, arriving at Columbia about daybreak of the 9th, having marched about fifty miles in a heavy rain. Major Farmer and two squadrons of the Sixth New York were left to hold the bridge over Hardware River, between Scottsville and Columbia, until the arrival of the Third Division. A foraging party captured three wagons loaded with supplies, part of which was taken and the rest destroyed. Found a large quantity of goods—grain in sacks, molasses in barrels, rich clothing in trunks, 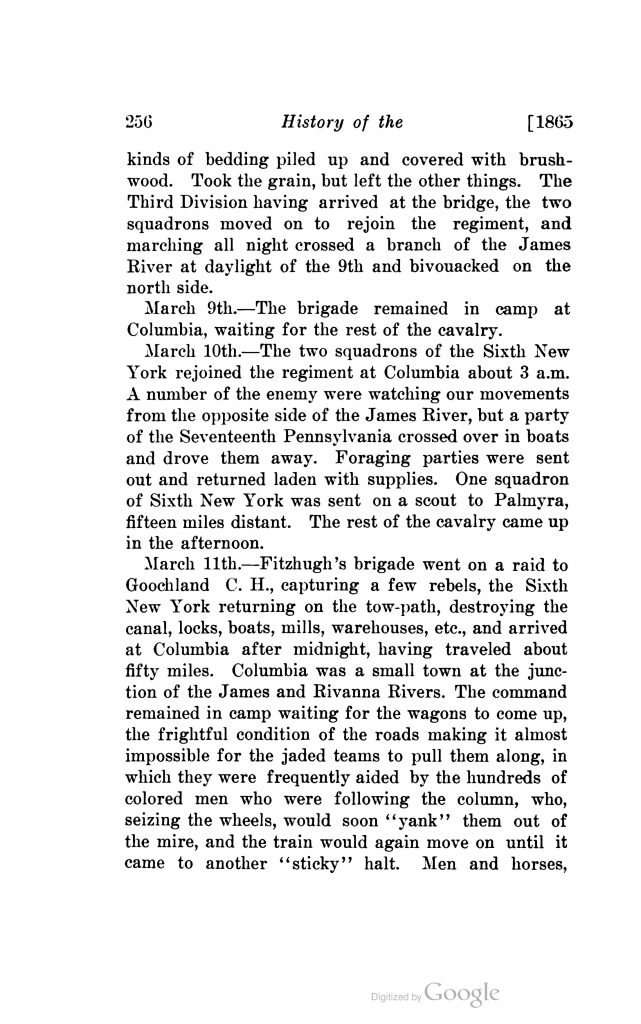 and all kinds of bedding piled up and covered with brushwood. Took the grain, but left the other things. The Third Division having arrived at the bridge, the two squadrons moved on to rejoin the regiment, and marching all night crossed a branch of the James River at daylight of the 9th and bivouacked on the north side.

March 9th.—The brigade remained in camp at Columbia, waiting for the rest of the cavalry.

March 10th.—The two squadrons of the Sixth New York rejoined the regiment at Columbia about 3 a.m. A number of the enemy were watching our movements from the opposite side of the James River, but a party of the Seventeenth Pennsylvania crossed over in boats and drove them away. Foraging parties were sent out and returned laden with supplies. One squadron of Sixth New York was sent on a scout to Palmyra, fifteen miles distant. The rest of the cavalry came up in the afternoon.

March 11th.—[Charles L.] Fitzhugh's brigade went on a raid to Goochland C. H., capturing a few rebels, the Sixth New York returning on the tow-path, destroying the canal, locks, boats, mills, warehouses, etc., and arrived at Columbia after midnight, having traveled about fifty miles. Columbia was a small town at the junction of the James and Rivanna Rivers. The command remained in camp waiting for the wagons to come up, the frightful condition of the roads making it almost impossible for the jaded teams to pull them along, in which they were frequently aided by the hundreds of colored men who were following the column, who, seizing the wheels, would soon "yank" them out of the mire, and the train would again move on until it came to another "sticky" halt. Men and horses, 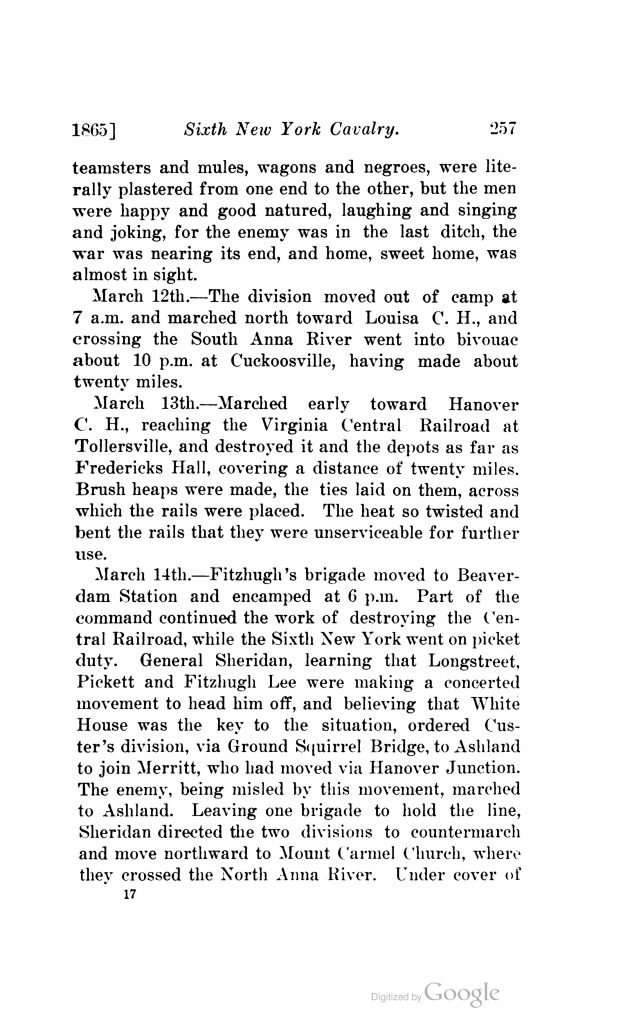 teamsters and mules, wagons and negroes, were literally plastered from one end to the other, but the men were happy and good natured, laughing and singing and joking, for the enemy was in the last ditch, the war was nearing its end, and home, sweet home, was almost in sight.