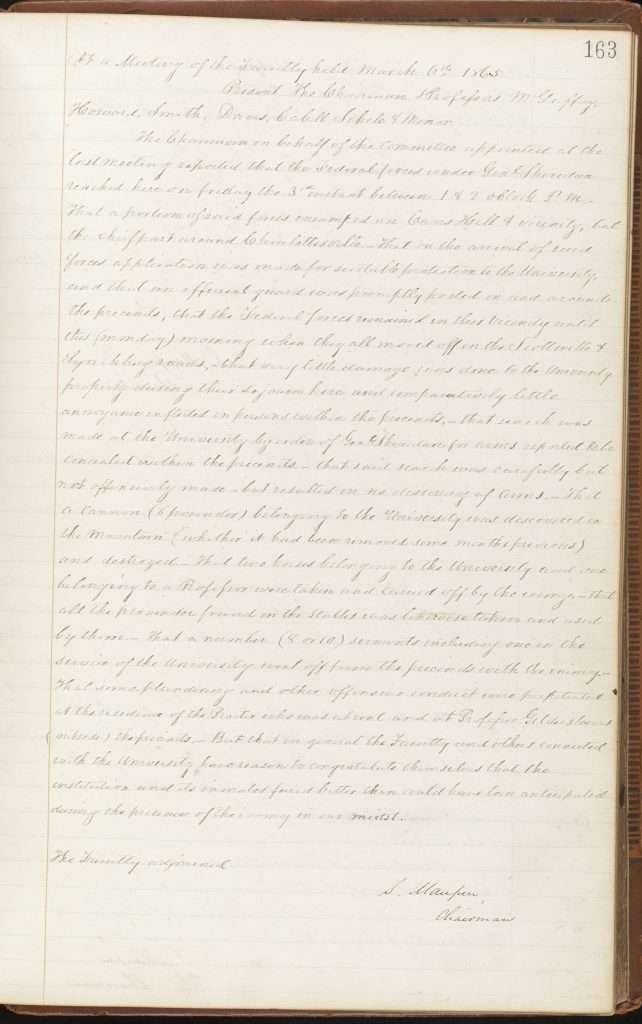 The Chairman in behalf of the committee appointed at the last meeting reported that the Federal forces under Genl [Philip] Sheridan reached here on Friday the 3rd instant between 1 & 2 o'clock P. M. That a portion of said forces encamped on Carrs Hill & vicinity, but the chief part around Charlottesville.—That on the arrival of said forces application was made for suitable protection to the University, and that an official guard was promptly posted in and around the precincts, that the Federal forces remained in this vicinity until this (Monday) morning when they all moved off on the Scottsville & Lynchburg roads,—that very little damage was done to the University property during their sojourn here and comparatively little annoyance inflicted on persons within the precincts.—that search was made at the University by order of Genl Sheridan for arms reported to be concealed in the precincts.—that said search was carefully but not offensively made—but resulted in no discovery of arms.—That a cannon (6 pounder) belonging to the University was discovered on the mountain (whither it had been removed some months previous) and destroyed.—That two horses belonging to the University and one belonging to a Professor were taken and carried off by the enemy.—That all the provender found in the stables was likewise taken and used by them.—That a number (8 or 10) servants including one in the service of the University went off from the precincts with the enemy.—That some plundering and other offensive conduct were perpetrated at the residence of the Proctor who was absent and at Professor [Basil L.] Gildersleeve's (outside) the precincts.—But that in general the Faculty and others connected with the University have reason to congratulate themselves that the institution and its inmates fared better than could have been anticipated during the presence of the enemy in our midst.