Staunton Hill and Its Original Owners

Bruce was born on March 7, 1856, at Staunton Hill in Charlotte County, the son of Charles Bruce, a wealthy planter, and Sarah Alexander Seddon Bruce. His brother William Cabell Bruce represented Maryland in the U.S. Senate, his brother-in-law was the writer Thomas Nelson Page, his nephew David K. E. Bruce served as American ambassador to France, West Germany, and the United Kingdom following World War II (1939–1945), and his niece Kathleen Bruce became an eminent historian. After attending the Norwood School in Nelson County from 1871 to 1873, Bruce spent the next two years at the University of Virginia and graduated from the law school of Harvard University in 1878. He continued his law study at the University of Virginia under John B. Minor in the 1878–1879 academic year before establishing his own practice in Baltimore in 1879.

The Plantation Negro as a Freeman

Bruce never enjoyed the practice of law and began to think seriously about the southern economy. A disciple of the New South ideal of a business and industrial revival based on values traditionally associated with the region, he initially regarded African Americans as an obstacle to progress. Bruce wrote a series of articles on the subject for the New York Evening Post in 1884 and expanded them the following year for his first book, The Plantation Negro as a Freeman: Observations on His Character, Condition, and Prospects in Virginia, for which he did not find a publisher until 1889. The volume reflected the thinking of many white southerners who then regarded African Americans as a socially and intellectually inferior laboring class. In later work Bruce recommended that blacks not needed for agricultural labor be resettled outside the South. 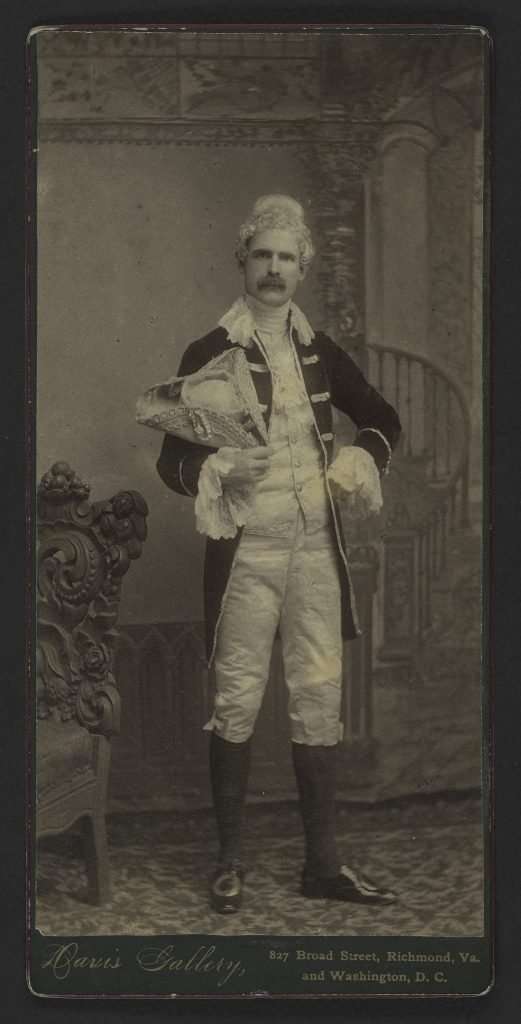 In 1887 Bruce moved to Richmond as secretary and treasurer of the Vulcan Iron Works, of which his brother Thomas Seddon Bruce was president. By 1890 Bruce had joined the editorial staff of the Richmond Times. His varied work included articles critical of women in the pulpit and editorials on race relations and economic development. Drawn toward historical scholarship, Bruce left the newspaper in 1892 to become corresponding secretary and librarian of the Virginia Historical Society. The following year he helped start the society’s quarterly historical journal, the Virginia Magazine of History and Biography. During Bruce’s five-year tenure as the founding editor, the magazine published historical documents and genealogical accounts focused on the leading colonial families, an agenda that continued for decades.

In his own research Bruce combined a nostalgia for the traditions of the Old South, the boosterism of the New South, and a new interest in the earliest period of Virginia’s history. He conceived of a three-part project intended to demonstrate that the idealized society of his youth had its basis in the seventeenth century. The first fruit of this research was Bruce’s two-volume Economic History of Virginia in the Seventeenth Century: An Inquiry into the Material Condition of the People, Based upon Original and Contemporaneous Records (1896), which made significant contributions to understanding Virginia’s early economic history and the rise to wealth of its great landed families. 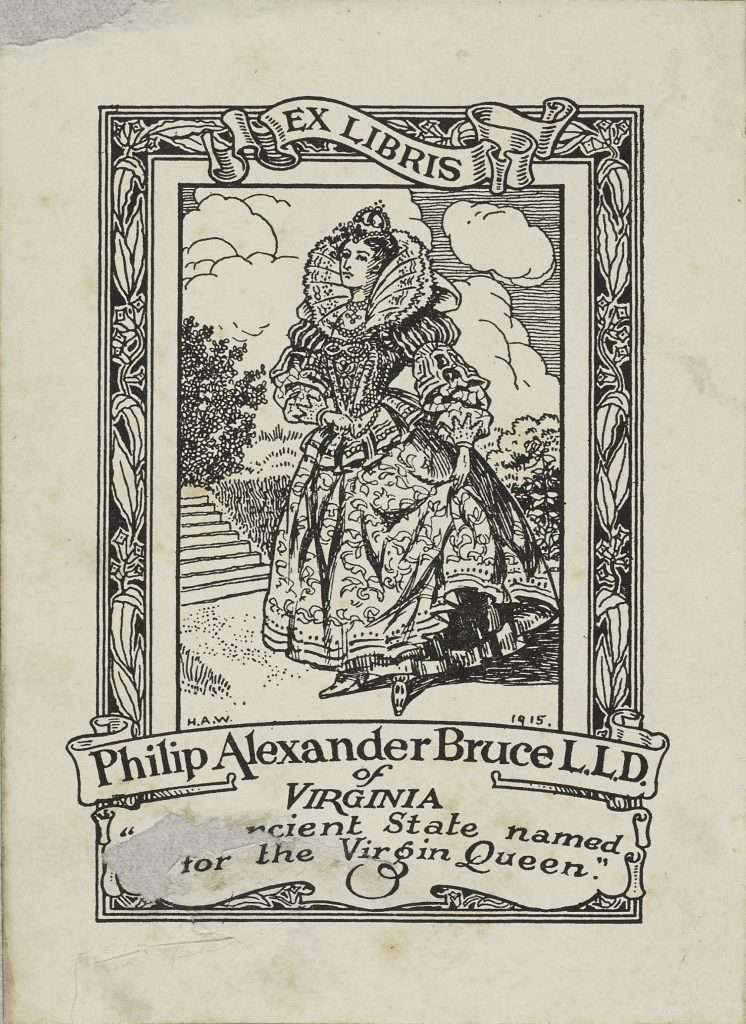 On October 19, 1896, Bruce married Elizabeth Tunstall Taylor Newton, a Norfolk widow. They had one daughter. Resigning from the Virginia Historical Society in 1898, Bruce made the first of several extended research trips to England. While there he publicized the New South gospel and tried to explain to British readers his views on race. Before publishing the results of his further research on seventeenth-century Virginia, Bruce wrote The Rise of the New South (1905), a work that established him as a leader in a school of historical scholarship that sought the origins of the New South in the ruins of the Old. Characterized by high optimism, it reads like an industrial gazetteer of the South and became one of the capstones of the New South crusade, one facet of which was restriction of African American suffrage. Modifying his stern views of two decades earlier, Bruce acknowledged a limited but useful place for black laborers in southern industry.

Bruce moved to Norfolk in 1907. He had inherited more than 1,400 acres of land from his parents’ estate in Charlotte County, the income from which enabled him to engage in historical scholarship for the remainder of his life. In 1907 Bruce published the second part of his series on seventeenth-century Virginia, the one-volume Social Life of Virginia in the Seventeenth Century: An Inquiry into the Origin of the Higher Planting Class, together with an Account of the Habits, Customs, and Diversions of the People. Its focus on the “higher planting class” fit the then-current notions of social history. Bruce sought the origins of the present in the past and attempted to discover how Virginia’s great early planters evolved into the celebrated colonial squirearchy and its commercial leaders, the forerunners of the New South.

He concluded his three-part Virginia history in 1910 with the two-volume Institutional History of Virginia in the Seventeenth Century: An Inquiry into the Religious, Moral, Educational, Legal, Military, and Political Condition of the People, Based on Original and Contemporaneous Records. Once again he focused almost exclusively on the social and political elites. Summing up all five of Bruce’s volumes on seventeenth-century Virginia, an unsigned article in the American Historical Review praised Bruce for employing new primary source materials “in lavish but discriminating profusion” and accorded him “no small measure of praise as a scholar and a thinker.”

The stereotype of the Old South took firm root in Bruce’s memory of his own childhood, his views of the past, and his scholarship. This vision is clearly evident in the laudatory popular biography of Robert E. Lee that Bruce published in 1907 and in Brave Deeds of Confederate Soldiers (1916), both reflecting his lifelong allegiance to the Lost Cause and to the mythology and symbolism of the Old South. In 1916 Bruce moved to Charlottesville as centennial historian of the University of Virginia. Working in the library and from the university’s archives he wrote the five-volume History of the University of Virginia, 1819–1919: The Lengthened Shadow of One Man (1920–1922). Bruce treated the university as both an educational and a cultural institution. The subtitle summed up his belief that Thomas Jefferson‘s influence had been pervasive throughout the university’s history and that in turn the university’s influence had been profoundly significant in the history of Virginia.

The lives of great Virginians formed the subject of Bruce’s last major publication, The Virginia Plutarch (1929). Its two volumes contained biographies of the figures he deemed the most important and influential in Virginia’s history, all eminent white men except for Powhatan and Pocahontas. Bruce published numerous articles and reviews throughout his career, several small works, and one textbook, A School History of the United States (1903). He wrote the section on Virginia’s history through 1763 for a three-volume History of Virginia published in 1924 and supplemented with three additional volumes of densely printed biographical data supplied by the subjects themselves. A revised and extended version of that essay, carrying Virginia’s history up to World War I (1914–1918), appeared as Virginia: Rebirth of the Old Dominion (1929). Bruce also contributed entries on Sir Samuel Argall, Nathaniel Bacon (1647–1676), Sir William Berkeley, and Norborne Berkeley, baron de Botetourt, to the Dictionary of American Biography. He occasionally wrote poems, some of them in imitation of Edgar Allan Poe, and he published a small volume of verse, Pocahontas and Other Sonnets (1912).

Bruce’s works of popular history and on the American Civil War (1861–1865) have long been forgotten, and most of his scholarly works have been superseded. His writings on race and on elite whites are no longer persuasive, but his five volumes on the economic, institutional, and social history of seventeenth-century Virginia are still cited as important works of scholarship. Bruce did painstaking research in colonial land and court records and grounded his work in the available primary sources. The volumes have all been reprinted and have influenced subsequent textbook authors, giving his most important scholarly work an enduring place in the literature of Virginia’s history. 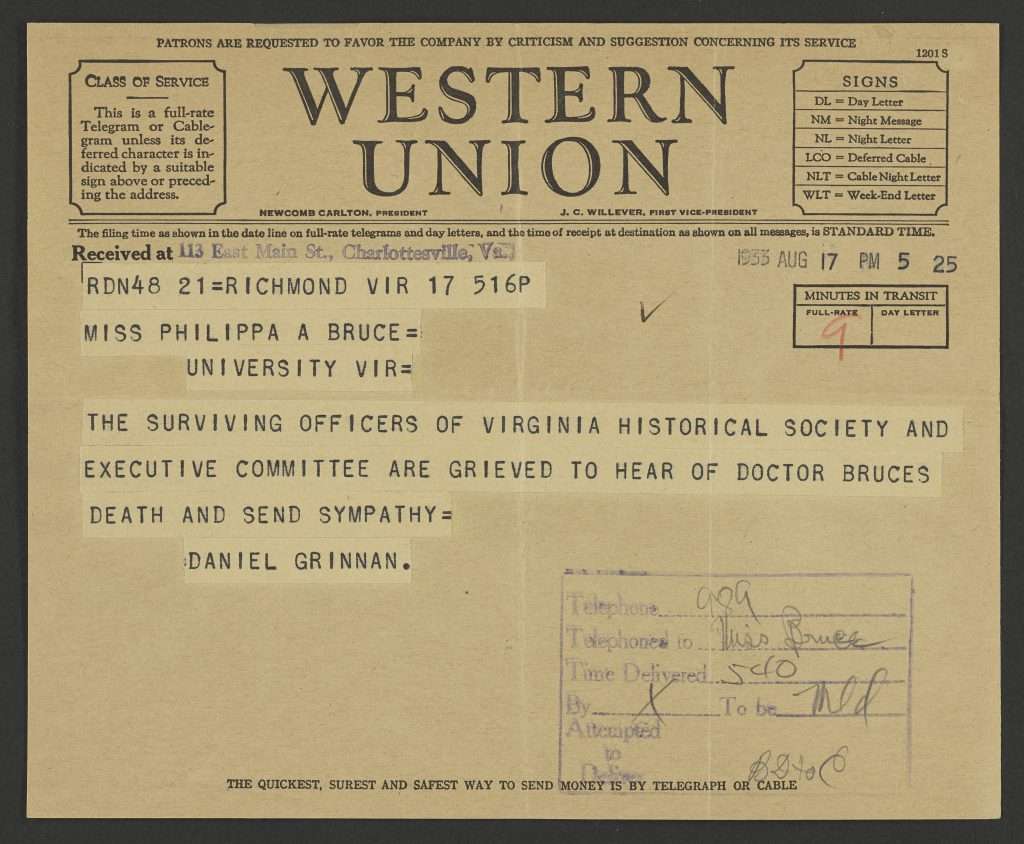 Bruce received honorary doctorates from the College of William and Mary in 1907 and from Washington and Lee University in 1908, and he was a vice president of the Virginia Historical Society from 1918 to 1933. After 1930 he was often ill. Bruce died at his home in Charlottesville on August 16, 1933, and was buried in the University of Virginia Cemetery in that city.