Thomas Nelson Page was born on April 23, 1853, at Oakland Plantation in Hanover County in central Virginia. He was the son of John Page and Elizabeth Burwell Nelson Page and so descended from two of the first prominent families—Page and Nelson—in the state’s history. Although these families differed in some ways (the Pages were planters from Gloucester County, while the Nelsons were importers and ship owners in Yorktown), they were similar in that they both arrived in the Virginia Colony from England in the mid-1600s and quickly amassed wealth, only to see it decline by the beginning of the early 1800s. By the time Page was born, the families were well-established aristocrats but were not extravagantly wealthy. Page’s father had worked to earn enough money to graduate from the University of Virginia and to set himself up as a respected lawyer in Hanover County. But despite the elder Page’s position and the fact that he owned land and about sixty slaves, the family was one of modest means throughout Thomas’s youth.

By the time Thomas Page reached his mid-teens, the Civil War had already been fought and lost. Life before the war had been quiet and peaceful, and the upheaval that followed shattered Page’s world and traumatized him in ways that would later be integral to his writing. The soldiers of the Confederacy would remain fixed as heroes of gargantuan stature to Page, who would always see them through the eyes of an adoring child. Likewise, antebellum Virginia would remain the uncomplicated place of a happy childhood—a world destroyed not only by war but also by the devastating financial hardships of the Reconstruction period that followed it.

The new world that Page found himself having to negotiate was one that demanded different strategies altogether in order to deal with dramatically different values and social dynamics. The old Virginia ruled by the aristocracy had, in his view, behaved according to rules of chivalry and codes of honor that upheld a rigid class system. This system strictly divided the worlds of aristocratic whites and poor whites, while placing aristocrats in a paternalistic relationship with enslaved African Americans. After the war, those relationships were squelched in Virginia and throughout the South by an overwhelming shift toward capitalism and new social policies. Throughout the rest of his life, Page would obsess about the sharp division between the hard capitalism of the New South Virginia and the aristocratic perspective of pleasant pseudo-feudalism of the Old South Virginia. In fact, this contrast would form one of the strongest threads in his writing.

As a youth, he attended his aunt’s day school at Oakland and, like many other aristocratic southerners, read the works of Sir Walter Scott and Alfred Lord Tennyson. Beginning in September 1869 Page enrolled at Washington College (now Washington and Lee University), where Robert E. Lee was then president, but he left in 1872 without graduating. By that time, he had decided to become a lawyer like his father. Lacking funds to pay for law school, however, he went to Louisville, Kentucky, to tutor his cousins’ children until he could earn enough money to enroll in the University of Virginia. Although he struggled as a student, he completed his work, was graduated, and passed the bar in November 1874. He practiced law in Hanover until 1876, when he moved to Richmond to set up a practice with his cousin. He retired and moved to Washington, D.C., in 1893. 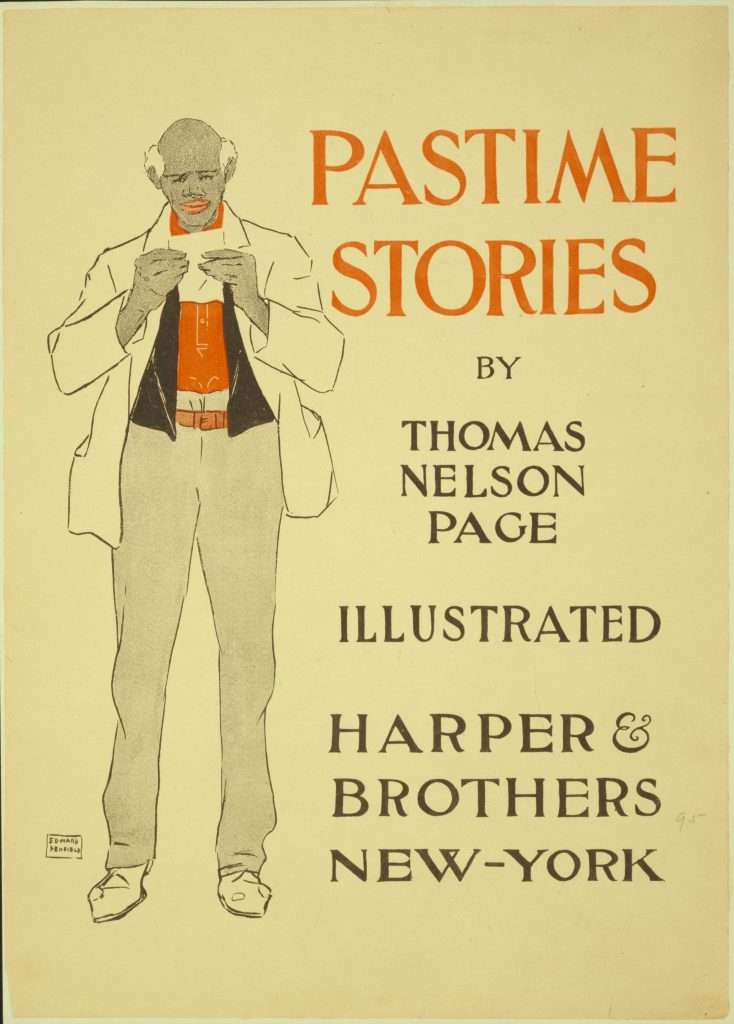 Page began writing while at the University of Virginia, where he joined the Jefferson Literary Society and contributed to the Virginia University Magazine. When he moved to Richmond, he occasionally wrote pieces for newspapers and was even commissioned by the Richmond Enquirer to report on an address given by Ralph Waldo Emerson in Charlottesville. Page’s first work as a creative writer to be published in a national magazine was “Uncle Gabe’s White Folks,” which appeared in Scribner’s Monthly in April 1877. The piece was a dialect poem, very similar to the poetry then being published by Irwin Russell (1853–1979; another white southern lawyer, from Port Gibson, Mississippi) in which an African American speaks in vernacular and praises plantation life. Russell had himself borrowed from the dialect styles of such writers as John Pendleton Kennedy and William Gilmore Simms. But where these writers had presented black people as background to the planter class, Russell actually had his African American characters speaking at center-stage. Unfortunately, their dialogue mouthed white misconceptions of black speech from a perspective that had been established by other writers and was evident in the popular minstrel shows of the day, in which white actors portrayed black singers and dancers.

Page’s “Uncle Gabe” poem demonstrated a mastery of the precedent set by Irwin Russell, but Page quickly surpassed Russell’s work in that it went beyond entertaining poetry to become highly compelling fiction. As such, it managed to influence both national policy toward sectional reconciliation and national attitudes toward race relations. About the time that “Uncle Gabe’s White Folks” was published, Page began working on a story that would stamp his name indelibly on Virginia and southern literary history. In 1880 a friend showed him a letter found in the pocket of a dead Confederate soldier that the man’s sweetheart had written to him. In the letter, she confessed her love for him but warned that if he came home to claim her without a furlough, she would not marry him. Haunted by this powerful combination of love and honor, as well as by his nostalgia for the prewar order, Page started to fashion a story in his mind. At first, he told it to his friends, gauging their reactions. Then he wrote it down and read it to neighbors, lecture audiences, Sunday school classes, and so on, keeping the parts that resonated with his audience and jettisoning those that did not. It was a composition method that he would utilize for all of his early stories, and one that would shape the finished products into finely tuned oral productions designed to be read aloud.

The story that grew out of this gestation method was “Marse Chan,” which was published in the April 1884 issue of the popular Century Magazine. The importance of this story in Page’s career and in the history of Virginia and southern letters cannot be overestimated. A frame narrative, it features a formerly enslaved narrator named Sam, who in dialect, recounts for a white listener a romantic story of Master Channing (Marse Chan), whose sweetheart, Anne, spurns him out of obedience to her father, who disapproves of their match because he differs politically with Channing’s father. When Channing leaves to fight in the Civil War, Anne realizes that she still loves him and wants to marry him. But her decision comes too late, because he has already died in battle. Sam, Channing’s personal servant, brings the dead soldier home, Anne dies of a broken heart, and the two are buried together. Aside from the sentimental romantic plot, which appealed to readers of the day, the story is important because it presents Page’s nostalgic view of antebellum Virginia. Page made this view especially potent by making the narrator a black servant rather than a white aristocrat. In placing his glorification of the Old South in the mouth of a former slave, he infused that vision with an authenticity that was all but incontrovertible to the majority of his readers (many of whom were northern whites who also longed to return to an idealized antebellum era, free from the stresses of capitalism). If plantation society’s “victims” themselves longed for the old days, went Page’s logic, then that time must have been great indeed. “Marse Chan” remains Page’s most anthologized story.

Page republished “Marse Chan” along with six other stories that developed this same nostalgic vision in his book In Ole Virginia, Or, Marse Chan and Other Stories (1887). The book was seminal in the southern local color movement, strongly influencing such writers as Grace King, Joel Chandler Harris, George Washington Cable, and Mary Noailles Murfree. It remains a classic of plantation fiction, or the so-called Moonlight and Magnolia school of southern writing that would find ultimate incarnation in Margaret Mitchell’s Gone with the Wind. The other stories in Page’s 1887 compilation offer glimpses into the mentality of the late nineteenth-century Virginia aristocracy, which sought to confirm its “cavalier” heritage even as it struggled to negotiate a world that ostensibly provided no room for the existence of that heritage. 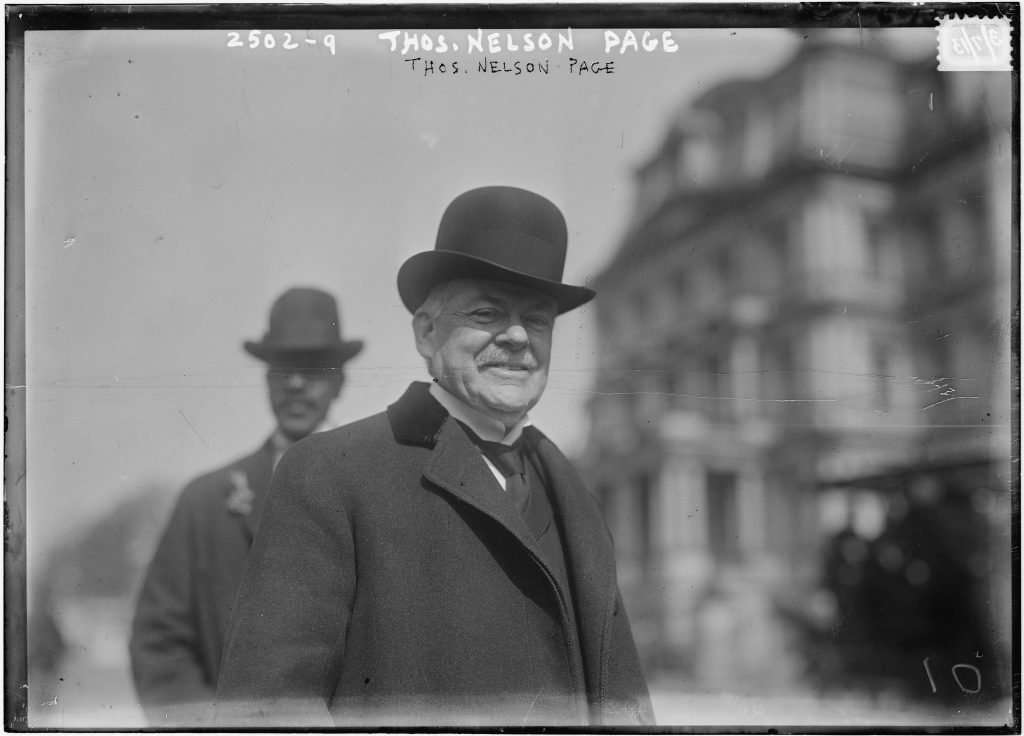 Page’s second most important fictional work, Red Rock: A Chronicle of Reconstruction (1898), follows a number of storylines as it details white aristocratic loss and reacquisition of power during Reconstruction. One of its primary strains follows the lives of the aristocratic Gray and Cary families, while another relates the marriage of southerner Steve Allen to northerner Ruth Welch. This story is a modified version of “reconciliation romance,” a popular late nineteenth-century literary device in which northern and southern whites marry, and their romantic union represents a reunion of the formerly warring factions. A long novel with a complicated plot, Red Rock nevertheless provides engaging and interesting reading and offers a vivid picture of Virginia through the eyes of the aristocracy during Reconstruction. It has also garnered a great deal of critical attention in recent years as a text that opposes the United States’ turn-of-the-century imperialism.

In addition to fiction and poetry, Page contributed a number of books in various genres, including drama, children’s literature, social and political history, literary criticism, and biography. While his topics ranged from the writings of Dante to conditions in Italy during World War I (U.S. president Woodrow Wilson appointed him ambassador to Italy from 1913–1919), Virginia and the South remained Page’s primary focus throughout his writing career. His most important titles on these themes include Two Little Confederates (a children’s book published in 1888 offering a fictionalized account of Page’s youth); and three books of social and political history: The Old South: Essays Social and Political (1892); Social Life in Virginia Before the War (1897); and The Old Dominion: Her Making and Her Manners (1908). Also among Page’s key works are Robert E. Lee: Man and Soldier (a biography published in 1909 and revised in 1911); On Newfound River (1891, a short, sentimental novel set in Virginia); The Old Gentleman of the Black Stock (1897, a short novel dealing with life in Richmond); and Gordon Keith (1903, a full-length novel about a young Virginia aristocrat who resorts to capitalism in order to regain his family’s plantation at the turn of the nineteenth century).

Page had married his first wife, Anne Seldon Bruce, in 1886, but she died only two years later, in 1888. After Page retired from law and moved to Washington, D.C., in 1893, he also lived part-time in York Harbor, Maine. From that point forward, he focused his energies on writing and lecturing. His second wife, Florence Lathrop Field, whom he married in 1893, died in 1921. Page died on November 1, 1922, at Oakland Plantation in Hanover, Virginia, which by then had been restored to its former grandeur. Before he passed away, he had been working on a novel about the Ku Klux Klan entitled The Red Riders. His brother, Rosewell Page, finished the book and it was published in 1924.