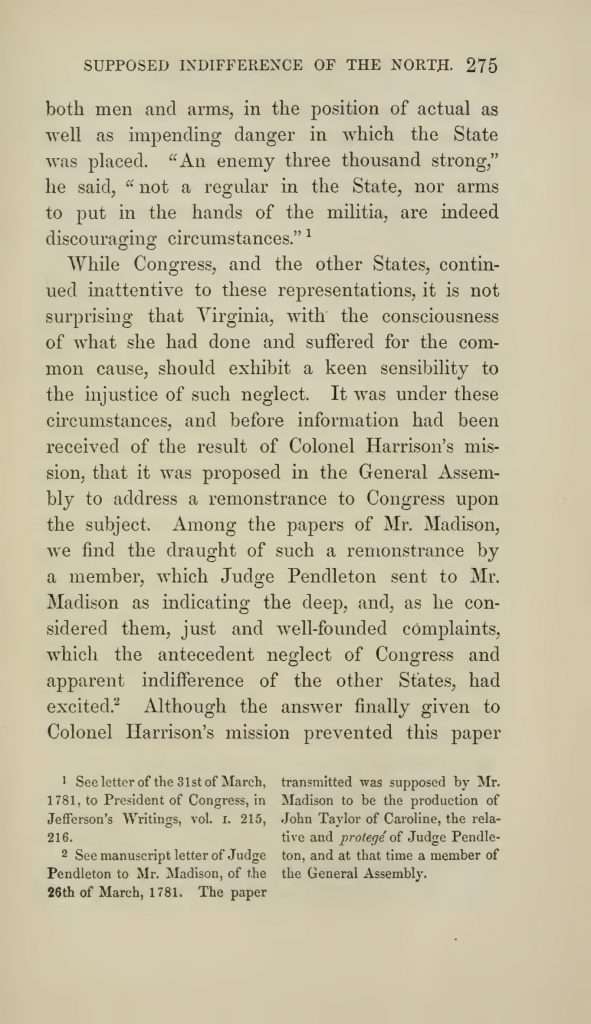 …While Congress, and the other States, continued inattentive to these representations, it is not surprising that Virginia, with the consciousness of what she had done and suffered for the common cause, should exhibit a keen sensibility to the injustice of such neglect. It was under these circumstances, and before information had been received of the result of Colonel Harrison’s mission, that it was proposed in the General Assembly to address a remonstrance to Congress upon the subject. Among the papers of Mr. Madison, we find the draught of such a remonstrance by a member, which Judge Pendleton sent to Mr. Madison as indicating the deep, and, as he considered them, just and well-founded complaints, which the antecedent neglect of Congress and apparent indifference of the other States, had excited. Although the answer finally given to Colonel Harrison’s mission prevented this paper 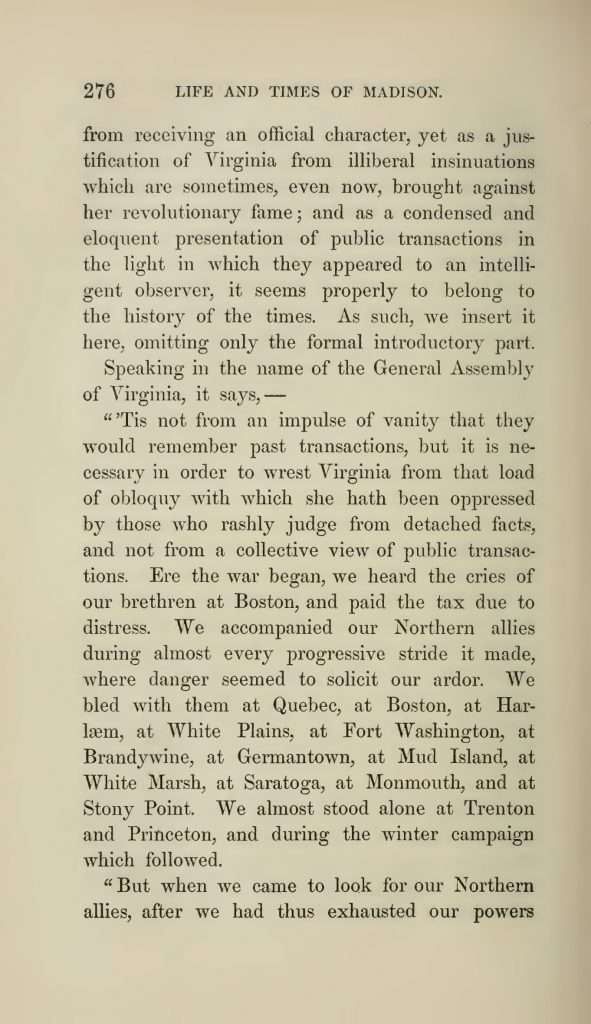 from receiving an official character, yet as a justification of Virginia from illiberal insinuations which are sometimes, even now, brought against her revolutionary fame; and as a condensed and eloquent presentation of public transactions in the light in which they appeared to an intelligent observer, it seems properly to belong to the history of the times. As such, we insert it here, omitting only the formal introductory part.

Speaking in the name of the General Assembly of Virginia, it says,―

“‘Tis not from an impulse of vanity that they would remember past transactions, but it is necessary in order to wrest Virginia from that load of obloquy with which she hath been oppressed by those who rashly judge from detached facts, and not from a collective view of public transactions. Ere the war begin, we heard the cries of our brethren at Boston, and paid the tax due to distress. We accompanied our Northern allies during almost every progressive stride it made, where danger seemed to solicit our ardor. We bled with them at Quebec, at Boston, at Harlæm, at White Plains, at Fort Washington, at Brandywine, at Germantown, at Mud Island, at White Marsh, at Saratoga, at Monmouth, and at Stony Point. We almost stood alone at Trenton and Princeton, and during the winter campaign which followed.

“But when we came to look for our Northern allies, after we had thus exhausted our powers 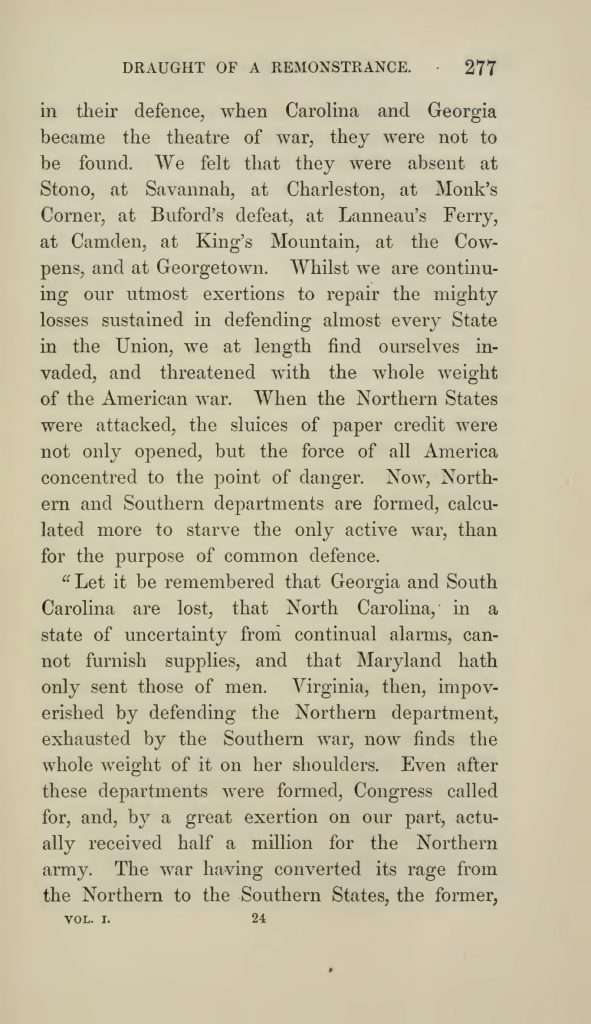 in their defence, when Carolina and Georgia became the theatre of war, they were not to be found. We felt that they were absent at Stono, at Savannah, at Charleston, at Monk’s Corner, at Buford’s defeat, at Lannuea’s Ferry, at Camden, at King’s Mountain, at the Cowpens, and at Georgetown. Whilst we are continuing our utmost exertions to repair the mighty losses sustained in defending almost every State in the Union, we at length find ourselves invaded, and threatened with the whole weight of the American war. When the Northern States were attacked, the sluices of paper credit were not only opened, but the force of all America concentrated to the point of danger. Now, Northern and Southern departments are formed, calculated more to starve the only active war, than for the purpose of common defence.

“Let it be remembered that George and South Carolina are lost, that North Carolina, in a state of uncertainty from continual alarms, cannot furnish supplies, and that Maryland hath only sent those of men. Virginia, then, impoverished by defending the Northern department, exhausted by the Southern war, now finds the whole weight of it on her shoulders. Even after these departments were formed, Congress called for, and, by a great exertion on our part, actually received half a million for the Northern army. The war having converted its rage from the Northern to the Southern States, the former, 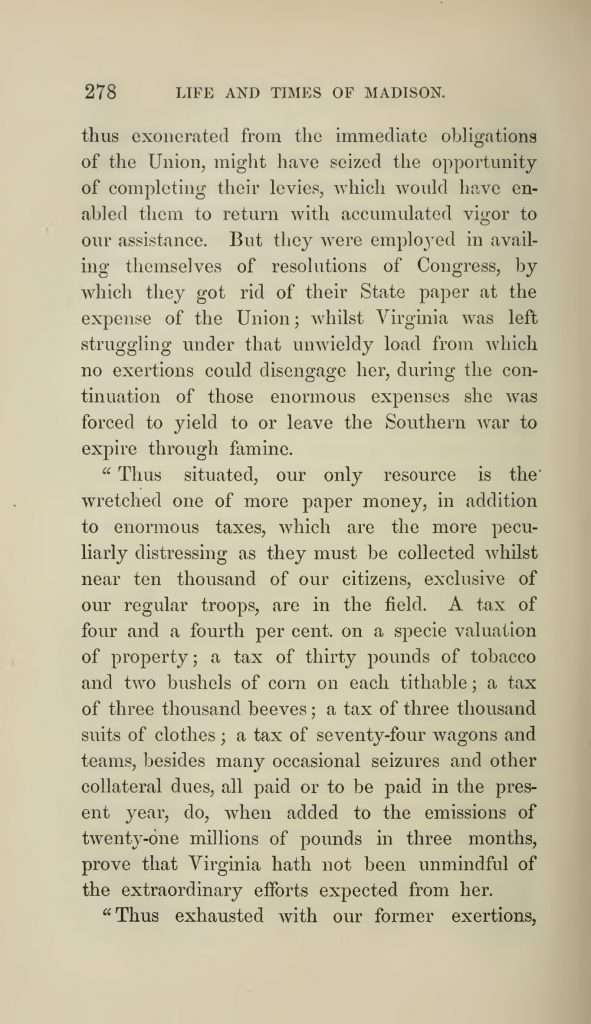 thus exonerated from the immediate obligations of the Union, might have seized the opportunity of completing their levies, which would have enabled them to return with accumulated vigor to our assistance. But they were employed in availing themselves of resolutions of Congress, by which they got rid of their State paper at the expense of the Union; whilst Virginia was left struggling under that unwieldy load from which no exertions could disengage her, during the continuation of those enormous expenses she was forced to yield to or leave the Southern war to expire through famine.

“Thus situated, our only resource is the wretched one of more paper money, in addition to enormous taxes, which are the more peculiarly distressing as they must be collected whilst near ten thousand of our citizens, exclusive of our regular troops, are in the field. A tax of four and a fourth per cent. on a specie valuation of property; a tax of thirty pounds of tobacco and two bushels of corn on each tithable; a tax of three thousand suits of clothes; a tax of seventy-four wagons and teams, besides many occasional seizures and other collateral dues, all paid or to be paid in the present year, do, when added to the emissions of twenty-one million pounds in three months, prove that Virginia hath not been unmindful of the extraordinary efforts expected from her.

“Thus exhausted with our former exertions, 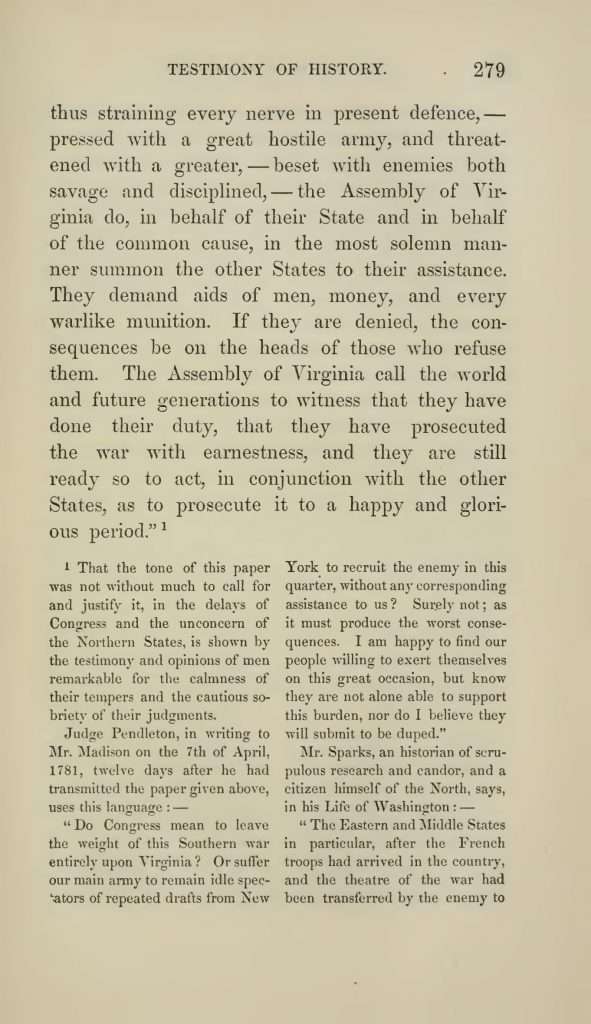 thus straining every nerve in present defence,―pressed with a great hostile army, and threatened with a greater,―beset with enemies both savage and disciplined,―the Assembly of Virginia do, in behalf of their State and in behalf of the common cause, in the most solemn manner summon the other States to their assistance. They demand aids of men, money, and every warlike munition. If they are denied, the consequences will be on the heads of those who refuse them. The Assembly of Virginia call the world and future generations to witness that they have done their duty, that they have prosecuted the war with earnestness, and they are still ready so to act, in conjunction with the other States, as to prosecute it to a happy and glorious period.”