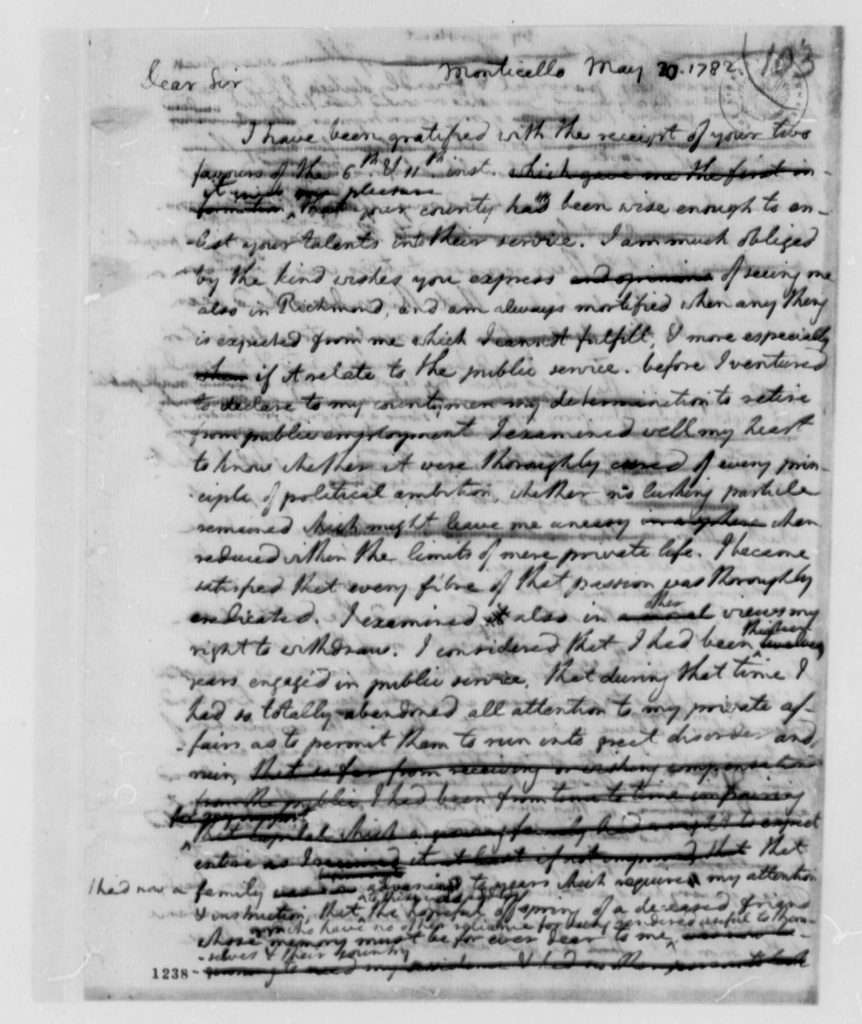 I have been gratified with the receipt of your two favours of the 6th. and 11th. inst. It gives me pleasure that your county has been wise enough to enlist your talents into their service. I am much obliged by the kind wishes you express of seeing me also in Richmond, and am always mortified when any thing is expected from me which I cannot fulfill, and more especially if it relate to the public service. Before I ventured to declare to my countrymen my determination to retire from public employment I examined well my heart to know whether it were thoroughly cured of every principle of political ambition, whether no lurking particle remained which might leave me uneasy when reduced within the limits of mere private life. I became satisfied that every fibre of that passion was thoroughly eradicated. I examined also in other views my right to withdraw. I considered that I had been thirteen years engaged in public service, that during that time I had so totally abandoned all attention to my private affairs as to permit them to run into great disorder and ruin, that I had now a family advanced to years which require my attention and instruction, that to this was added the hopeful offspring of a deceased friend whose memory must be for ever dear to mewho have no other reliance for being rendered useful to themselves and their country, 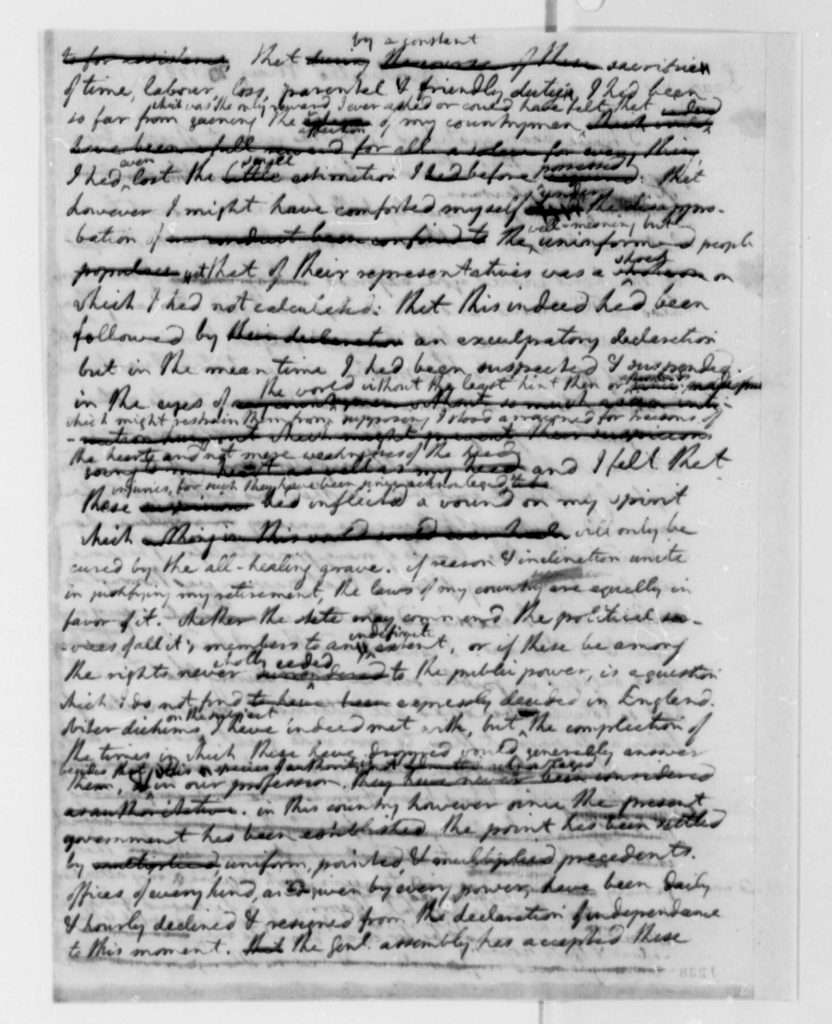 that by a constant sacrifice of time, labour, loss, parental and friendly duties, I had been so far from gaining the affection of my countrymen which was the only reward I ever asked or could have felt, that I had even lost the small estimation I before possessed: that however I might have comforted myself under the disapprobation of the well-meaning but uninformed people yet that of their representatives was a shock on which I had not calculated: that this indeed had been followed by an exculpatory declaration, but in the mean time I had been suspected and suspended in the eyes of the world without the least hint then or afterwards made public which might restrain them from supposing I stood arraigned for treasons of the heart and not mere weaknesses of the head. And I felt that these injuries, for such they have been since acknowleged, had inflicted a wound on my spirit which will only be cured by the all-healing grave. If reason and inclination unite in justifying my retirement, the laws of my country are equally in favor of it. Whether the state may command the political services of all it’s members to an indefinite extent, or if these be among the rights never wholly ceded to the public power, is a question which I do not find expressly decided in England. Obiter dictums on the subject I have indeed met with, but the complection of the times in which these have dropped would generally answer them, and besides that, this species of authority is not acknowleged in our profession. In this country however since the present government has been established the point has been settled by uniform, pointed, and multiplied precedents. Offices of every kind, and given by every power, have been daily and hourly declined and resigned from the declaration of independance to this moment. The General assembly has accepted these 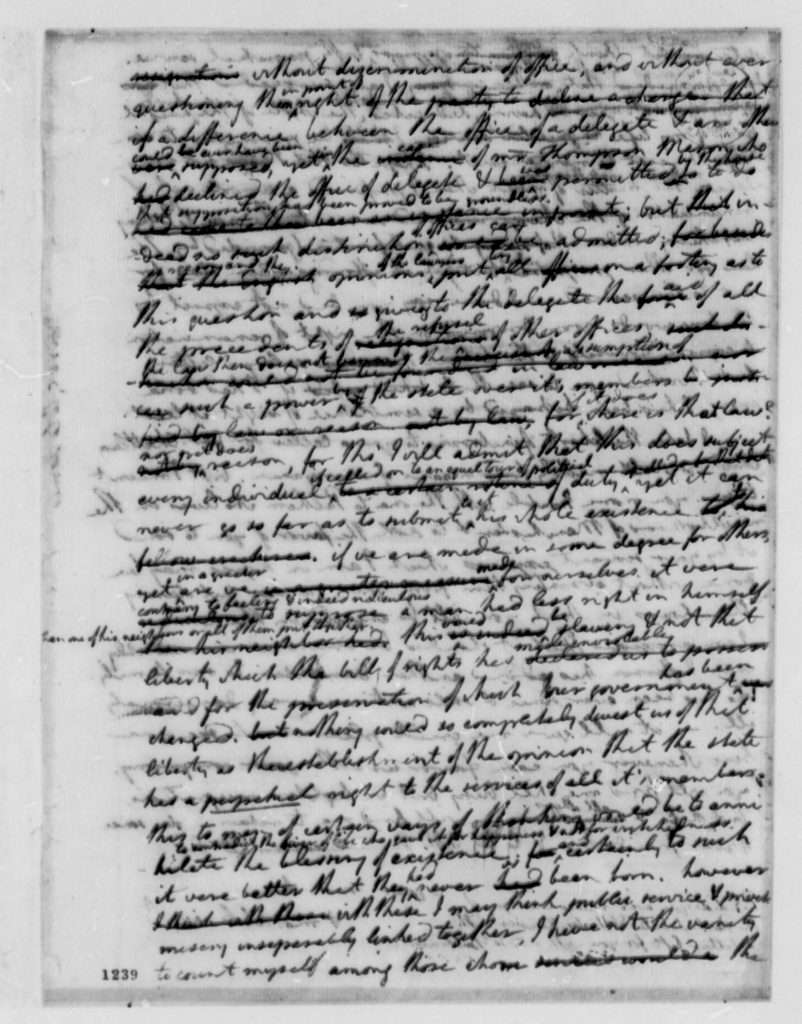 without discrimination of office, and without ever questioning them in point of right. If a difference between the office of a delegate and any other could ever have been supposed, yet in the case of Mr. Thompson Mason who declined the office of delegate and was permitted by the house so to do that supposition has been proved to be groundless. But indeed no such distinction of offices can be admitted; reason and the opinions of the lawyers putting all on a footing as to this question and giving to the delegate the aid of all the precedents of the refusal of other offices, the law then does not warrant the assumption of such a power by the state over it’s members. For if it does where is that law? Nor yet does reason, for tho’ I will admit that this does subject every individual if called on to an equal tour of political duty yet it can never go so far as to submit to it his whole existence. If we are made in some degree for others, yet in a greater are we made for ourselves. It were contrary to feeling and indeed ridiculous to suppose a man had less right in himself than one of his neighbors or all of them put together. This would be slavery and not that liberty which the bill of rights has made inviolable and for the preservation of which our government has been changed. Nothing could so completely divest us of that liberty as the establishment of the opinion that the state has a perpetual right to the services of all it’s members. This to men of certain ways of thinking would be to annihilate the blessing of existence; to contradict the giver of life who gave it for happiness and not for wretchedness, and certainly to such it were better that they had never been born. However with these I may think public service and private misery inseparably linked together, I have not the vanity to count myself among those whom the 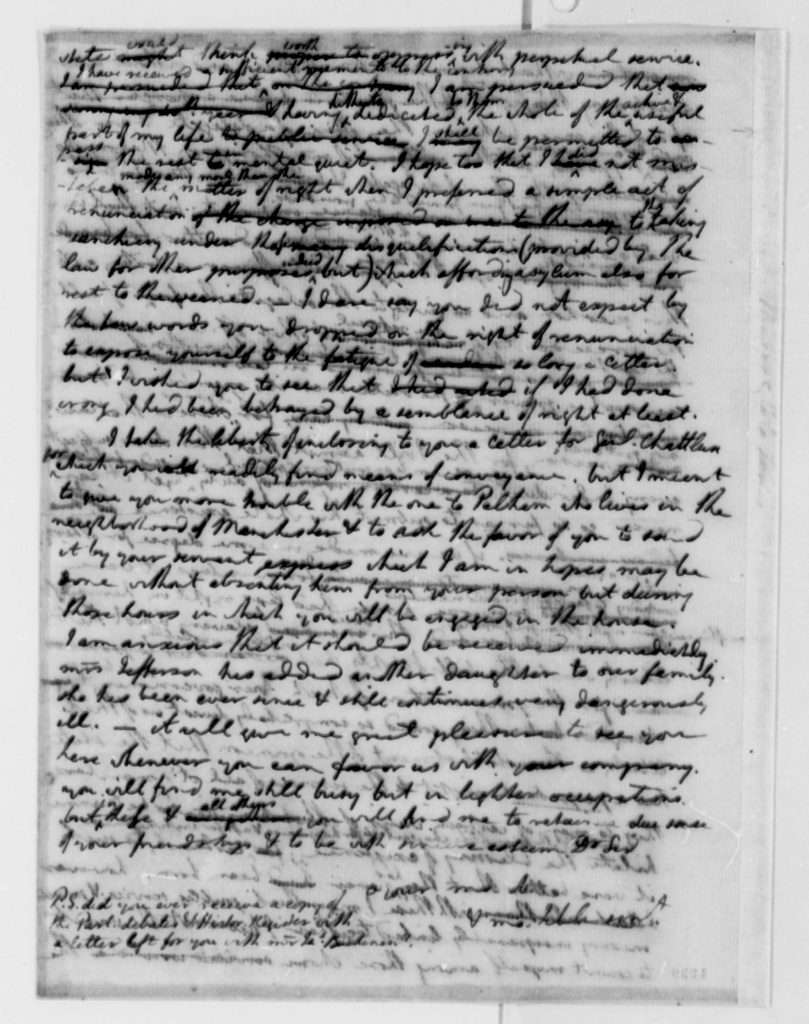 state would think worth oppressing with perpetual service. I have received a sufficient memento to the contrary. I am persuaded that having hitherto dedicated to them the whole of the active and useful part of my life I shall be permitted to pass the rest in mental quiet. I hope too that I did not mistake the mode any more than the matter of right when I preferred a simple act of renunciation to the taking sanctuary under those many disqualifications (provided by the law for other purposes indeed but) which afford asylum also for rest to the wearied. I dare say you did not expect by the few words you dropped on the right of renunciation to expose yourself to the fatigue of so long a letter, but I wished you to see that if I had done wrong I had been betrayed by a semblance of right at least.

I take the liberty of inclosing to you a letter for Genl. Chattlux for which you will readily find means of conveyance. But I meant to give you more trouble with the one to Pelham who lives in the neighborhood of Manchester and to ask the favor of you to send it by your servant express which I am in hopes may be done without absenting him from your person but during those hours in which you will be engaged in the house. I am anxious that it should be received immediately. Mrs. Jefferson has added another daughter to our family. She has been ever since and still continues very dangerously ill. It will give me great pleasure to see you here whenever you can favor us with your company. You will find me still busy but in lighter occupations. But in these and all others you will find me to retain a due sense of your friendship & to be with sincere esteem Dr Sir Your mo. ob. & mo. hble servt.

P.S. Did you ever receive a copy of the Parl. debates and Histor. Register with a letter left for you with Mr. Jas. Buchanan?