Skip to content
Author: General AssemblyTranscription Source: William Waller Hening, ed., The Statutes at Large; Being a Collection of All the Laws of Virginia from the First Session of the Legislature in the Year 1619 (Richmond: Franklin Press, 1821), 9:216–217.
FULL TEXT 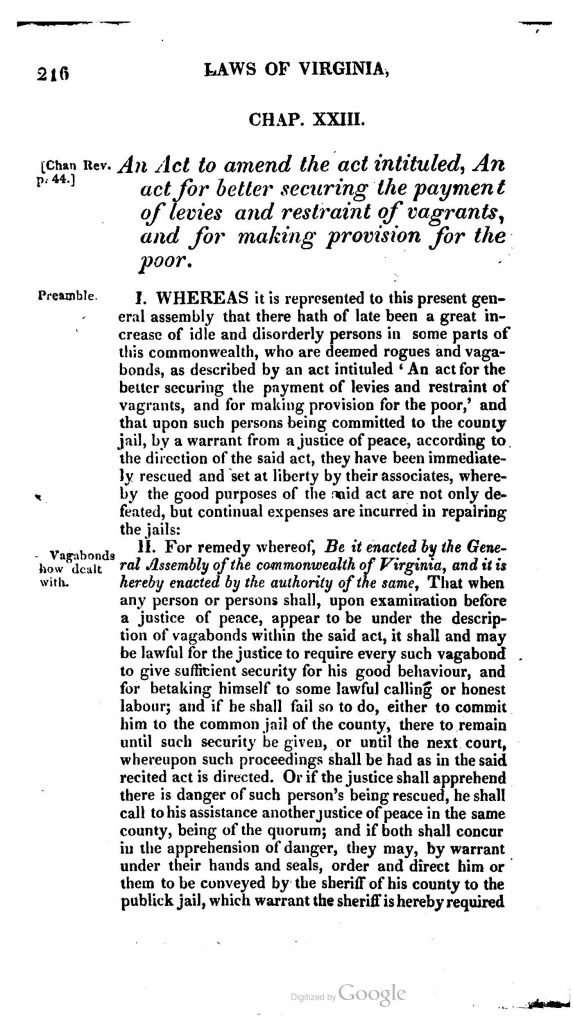 The Statutes at Large; Being a Collection of All the Laws of Virginia from the First Session of the Legislature in the Year 1619 (1821), Volume 9, Page 216

An Act to amend the act intituled, An act for better securing the payment of levies and restraint of vagrants, and for making provision for the poor.

I. WHEREAS it is represented to this present general assembly that there hath of late been a great increase of idle and disorderly persons in some parts of this commonwealth, who are deemed rogues and vagabonds, as described by an act intituled ‘An act for the better securing the payment of levies and restraint of vagrants, and for making provision for the poor’, and that upon such persons being committed to the county jail, by a warrant from a justice of peace, according to the direction of the said act, they have been immediately rescued and set at liberty by their associates, whereby the good purposes of the said act are not only defeated, but continual expenses are incurred in repairing the jails:

II. For remedy whereof, Be it enacted by the General Assembly of the commonwealth of Virginia, and it is hereby enacted by the authority of the same, That when any person or persons shall, upon examination before a justice of peace, appear to be under the description of vagabonds within the said act, it shall and may be lawful for the justice to require every such vagabond to give sufficient security for his good behaviour, and for betaking himself to some lawful calling or honest labour; and if he shall fail so to do, either to commit him to the common jail of the county, there to remain until such security be given, or until the next court, whereupon such proceedings shall be had as in the said recited act is directed. Or if the justice shall apprehend there is danger of such person’s being rescued, he shall call to his assistance another justice of peace in the same county, being of the quorum; and if both shall concur in the apprehension of danger, they may, by warrant under their hands and seals, order and direct him or them to be conveyed by the sheriff of his county to the publick jail, which warrant the sheriff is hereby required 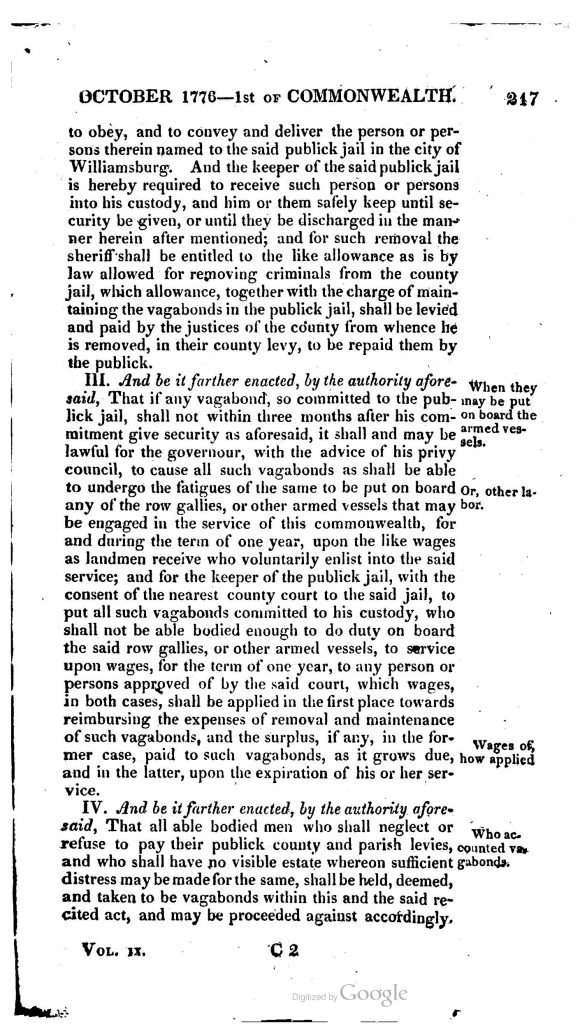 to obey, and to convey and deliver the person or persons therein named to the said publick jail in the city of Williamsburg. And the keeper of the said publick jail is hereby required to receive such person or persons into his custody, and him or them safely keep until security be given, or until they be discharged in the manner herein after mentioned; and for such removal the sheriff shall be entitled to the like allowance as is by law allowed for removing criminals from the county jail, which allowance, together with the charge of maintaining the vagabonds in the publick jail, shall be levied and paid by the justices of the county from whence he is removed, in their county levy, to be repaid them by the publick.

III. And be it farther enacted, by the authority aforesaid, That if any vagabond, so committed to the publick jail, shall not within three months after his commitment give security as aforesaid, it shall and may be lawful for the governour, with the advice of his privy council, to cause all such vagabonds as shall be able to undergo the fatigues of the same to be put on board any of the row gallies, or other armed vessels that may be engaged in the service of this commonwealth, for and during the term of one year, upon the like wages as landmen receive who voluntarily enlist into the said service; and for the keeper of the publick jail, with the consent of the nearest county court to the said jail, to put all such vagabonds committed to his custody, who shall not be able bodied enough to do duty on board the said row gallies, or other armed vessels, to service upon wages, for the term of one year, to any person or persons approved to by the said court, which wages, in both cases, shall be applied in the first place towards reimbursing the expenses of removal and maintenance of such vagabonds, and the surplus, if any, in the former case, paid to such vagabonds, as it grows due, and in the latter, upon the expiration of his or her service.

IV. And be it farther enacted, by the authority aforesaid, That all able bodied men who shall neglect or refuse to pay their publick county and parish levies, and who shall have no visible estate whereon sufficient distress may be made for the same, shall be held, deemed, and taken to be vagabonds within this and the said recited act, and may be proceeded against accordingly.