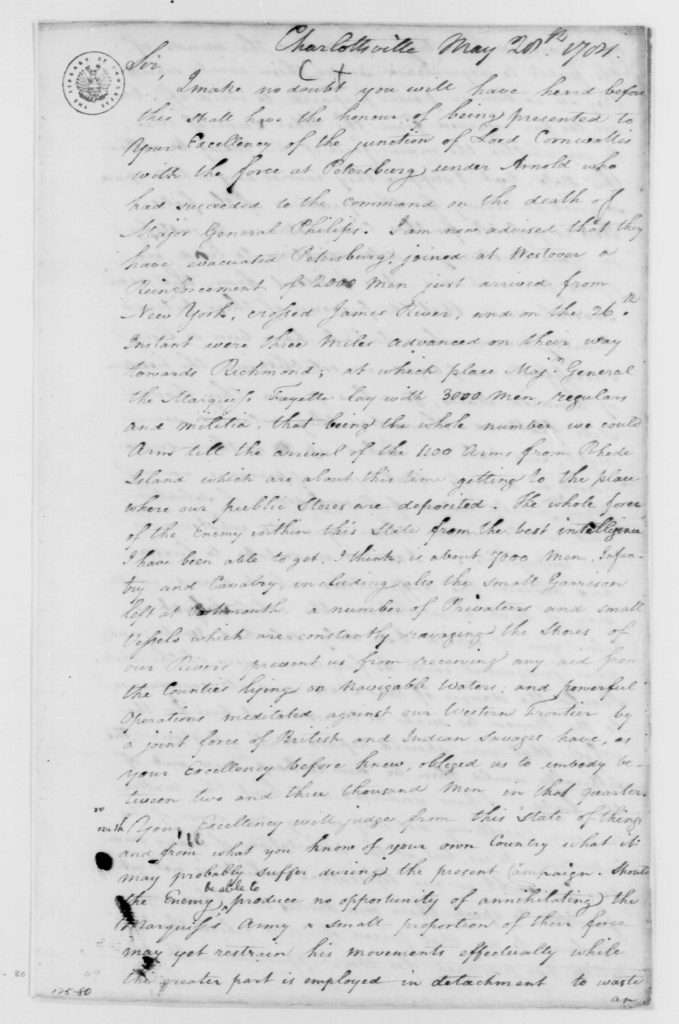 I make no doubt you will have heard, before this shall have the honour of being presented to Your Excellency, of the junction of Lord Cornwallis with the force at Petersburg under Arnold who had succeeded to the command on the death of Major General Philips. I am now advised that they have evacuated Petersburg, joined at Westover a Reinforcement of 2000 Men just arrived from New York, crossed James River, and on the 26th. Instant were three Miles advanced on their way towards Richmond; at which place Majr. General the Marquiss Fayette lay with 3000 men, regulars and militia, that being the whole number we could Arm till the arrival of the 1100 Arms from Rhode Island which are about this time getting to the place where our public Stores are deposited. The whole force of the Enemy within this State from the best intelligence I have been able to get, I think, is about 7000 Men, Infantry and Cavalry, including also the small Garrison left at Portsmouth. A number of Privateers and small Vessels which are constantly ravaging the Shores of our Rivers prevent us from receiving any aid from the Counties lying on Navigable Waters; [and powerful Operations meditated against our Western Frontier by a joint force of British and Indian savages have, as your Excellency before knew, obliged us to embody between two and three thousand Men in that quarter. Your Excellency will judge from this state of things and from what you know of your own Country what it may probably suffer during the present Campaign. Should the Enemy be able to produce no opportunity of annihilating the Marquis’s Army a small proportion of their force may yet restrain his movements effectually while the greater part is employed in detachment to waste 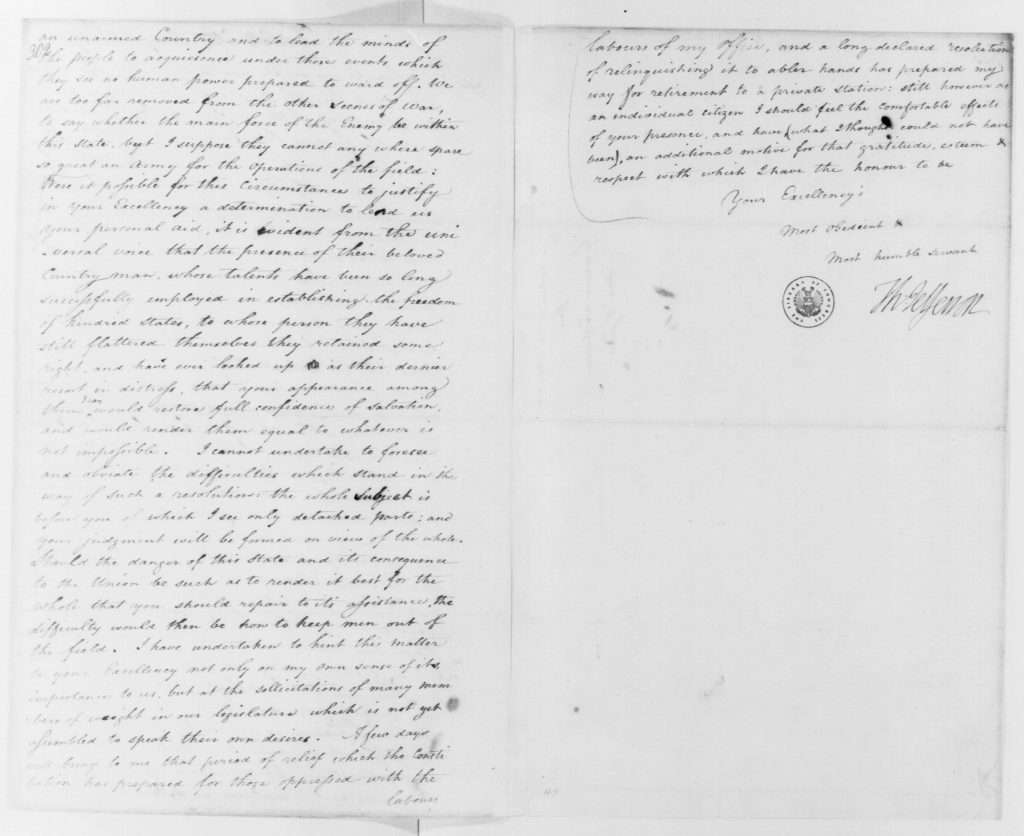 an unarmed Country and to lead the minds of the people to acquiesence under those events which they see no human power prepared to ward off. We are too far removed from the other scenes of war, to say whether the main force of the Enemy be within this State, but I suppose they cannot any where spare so great an Army for the operations of the field: Were it possible for this Circumstance to justify in Your Excellency a determination to lend us Your personal aid, it is evident from the universal voice that the presence of their beloved Countryman, whose talents have been so long successfully employed in establishing the freedom of kindred States, to whose person they have still flattered themselves they retained some right, and have ever looked up as their dernier resort in distress, that your appearance among them I say would restore full confidence of salvation, and would render them equal to whatever is not impossible. I cannot undertake to foresee and obviate the difficulties which stand in the way of such a resolution: the whole Subject is before you of which I see only detached parts; and your judgment will be formed on view of the whole. Should the danger of this State and its consequence to the Union be such as to render it best for the whole that you should repair to it’s assistance, the difficulty would then be how to keep men out of the field. I have undertaken to hint this matter to your Excellency not only on my own sense of its importance to us, but at the sollicitations of many members of weight in our legislature which is not yet assembled to speak their own desires. A few days will bring to me that period of relief which the Constitution has prepared for those oppressed with the labours of my office, and a long declared resolution of relinquishing it to abler hands has prepared my way for retirement to a private station: still however as an individual citizen I should feel the comfortable effects of your presence, and have (what I thought could not have been), an additional motive for that gratitude, esteem & respect with which]1 I have the honour to be Your Excellency’s Most obedient & Most humble servant,