Skip to content
Author: General AssemblyTranscription Source: Journal of the House of Delegates of the Commonwealth of Virginia Begun and Held in the Town of Richmond, in the County of Henrico, on Monday, the Seventh Day of May, in the Year of our Lord One Thousand Seven Hundred and Eighty-One (Richmond, Virginia: Thomas W. White, 1828), 5–6.
FULL TEXT 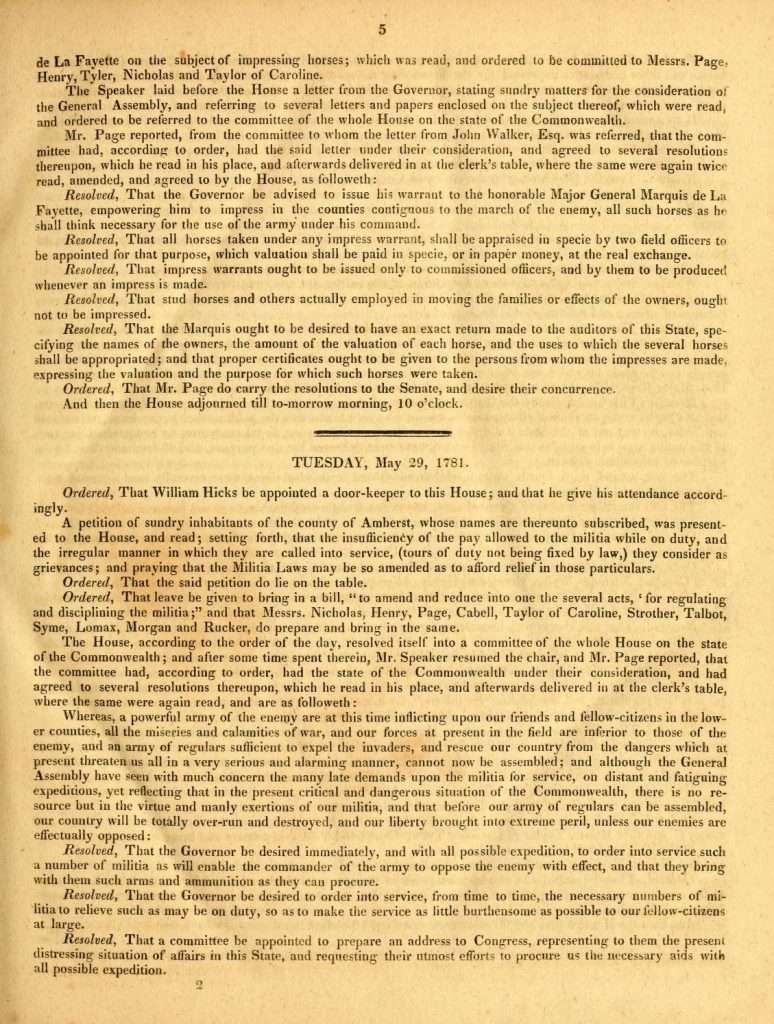 Journal of the House of Delegates of the Commonwealth of Virginia (1828), Page 5

Ordered, That Williams Hicks be appointed a door-keeper to this House; and that he give his attendance accordingly.

A petition of sundry inhabitants of the county of Amherst, whose names are thereunto subscribed, was presented to the House, and read; setting forth, that the insufficiency of the pay allowed to the militia while on duty, and the irregular manner in which they are called into service, (tours of duty not being fixed by law,) they consider as grievances; and praying that the Militia Laws may be so amended as to afford relief in those particulars.

Ordered, That the said petition do lie on the table.

Ordered, That leave be given to bring in a bill, “to amend and reduce into one the several acts, ‘for regulating and disciplining the militia;’ and that Messrs. Nicholas, Henry, Page, Cabell, Taylor of Caroline, Strother, Talbot, Syme, Lomax, Morgan and Rucker, do prepare and bring in the same.

The House, according to the order of the day, resolved itself into a committee of the whole House on the state of the Commonwealth; and after some time spent therein, Mr. Speaker resumed the chair, and Mr. Page reported, that the committee had, according to order, had the state of the Commonwealth under their consideration, and had agreed to several resolutions thereupon, which he read in his place, and afterwards delivered in at the clerk’s table, where the same were again read, and are as followeth:

Whereas, a powerful army of the enemy are at this time inflicting upon our friends and fellow-citizens in the lower counties, all the miseries and calamities of war, and our forces at present in the field are inferior to those of the enemy, and an army of regulars sufficient to expel the invaders, and rescue our country from the dangers which at present threaten us all in a very serious and alarming manner, cannot now be assembled; and although the General Assembly have seen with much concern the many late demands upon the militia for service, on distant and fatiguing expeditions, yet reflecting that in the present critical and dangerous situation of the Commonwealth, there is no resource but in the virtue and manly exertions of our militia, and that before our army of regulars can be assembled, our country will be totally over-run and destroyed, and our liberty brought into extreme peril, unless our enemies are effectually opposed:

Resolved, That the Governor be desired immediately, and with all possible expedition, to order into service such a number of militia as will enable the commander of the army to oppose the enemy with effect, and that they bring with them such arms and ammunition as they can procure.

Resolved, That a committee be appointed to prepare an address to Congress, representing to them the present distressing situation of affairs in this State, and representing their utmost efforts to procure us the necessary aids with all possible expedition. 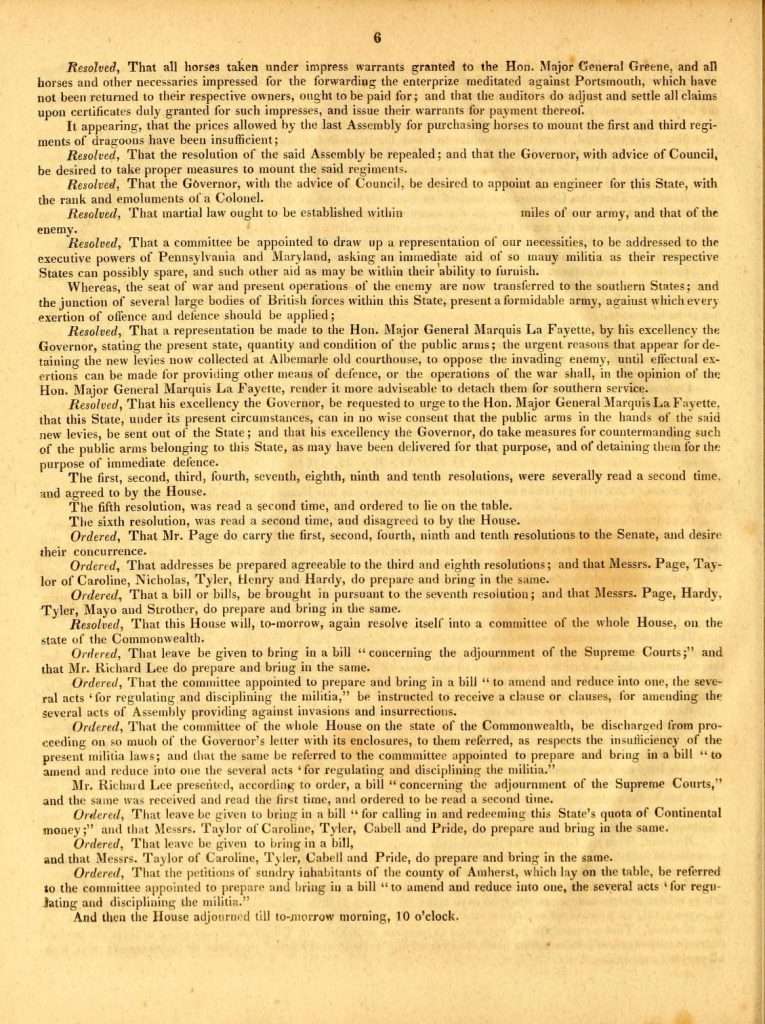 Resolved, That all horses taken under impress warrants granted to the Hon. Major General Greene, and all horses and other necessaries impressed for the forwarding the enterprise meditated against Portsmouth, which have not been returned to their respective owners, ought to be paid for; and that the auditors do adjust and settle all claims upon certificates duly granted for such impresses, and issue their warrants for payment thereof.

It appearing, that the prices allowed by the last Assembly for purchasing horses to mount the first and third regiments of dragoons have been insufficient;

Resolved, That the resolution of the said Assembly be repealed; and that the Governor, with advice of Council, be desired to take proper measures to mount the said regiments.

Resolved, That the Governor, with the advice of Council, be desired to appoint an engineer for this State, with the rank and emoluments of a Colonel.

Resolved, That martial law ought to be established within [ ] miles of our army, and that of the enemy.

Resolved, That a committee be appointed to draw up a representation of our necessities, to be addressed to the executive powers of Pennsylvania and Maryland, asking an immediate aid of so many militia as their respective States can possibly spare, and such other aid as may be within their ability to furnish.

Whereas, the seat of war and present operations of the enemy are now transferred to the southern States; and the junction of several large bodies of British forces within this State, present a formidable army, against which every exertion of offence and defence should be applied;

Resolved, That a representation be made to the Hon. Major General Marquis La Fayette, by his excellency the Governor, stating the present state, quantity and condition of the public arms; the urgent reasons that appear for detaining the new levies, be sent out of State; and that his excellency the Governor, do take measures for countermanding such of the public arms belonging to this State, as may have been delivered for that purpose, and of detaining them for the purpose of immediate defence.

The first, second, third, fourth, seventh, eighth, ninth and tenth resolutions, were severally read a second time, and agreed to by the House.

The fifth resolution, was read a second time, and ordered to lie on the table.

The sixth resolution, was read a second time, and disagreed to by the House.

Ordered, That Mr. Page do carry the first, second, fourth, ninth, and tenth resolution to the Senate, and desire their concurrence.

Ordered, That addresses be prepared agreeable to the third and eighth resolutions; and that Messrs. Page, Taylor of Caroline, Nicholas, Tyler, Henry and Hardy, do prepare and bring in the same.

Ordered, That a bill or bills, be brought in pursuant to the seventh resolution; and that Messrs. Page, Hardy, Tyler, Mayo and Strother, do prepare and bring in the same.

Resolved, That this House will, to-morrow, again resolve itself into a committee of the whole House, on the state of the Commonwealth.

Ordered, That leave be given to bring in a bill “concerning the adjournment of the Supreme Courts;” and that Mr. Richard Lee do prepare and bring in the same.

Ordered, That the committee appointed to prepare and bring in a bill “to amend and reduce into one, the several acts ‘for regulating and disciplining the militia,” be instructed to receive a clause or clauses, for amending the several acts of Assembly providing against invasions and insurrections.

Ordered, That the committee of the whole House on the state of the Commonwealth, be discharged from proceeding on so much of the Governor’s letter with its enclosures, to them referred, as respects the insufficiency of the present militia laws; and that the same be referred to the committee appointed to prepare and bring in a bill “to amend and reduce into one the several acts for ‘regulating and disciplining the militia.'”

Mr. Richard Lee presented, according to order, a bill “concerning the adjournment of the Supreme Courts,” and the same was received and read the first time, and ordered to be read a second time.

Ordered, That leave be given to bring in a bill “for calling in and redeeming this State’s quota of Continental money;” and that Messrs. Taylor of Caroline, Tyler, Cabell and Pride, do prepare and bring in the same.

Ordered, That leave be given to bring in a bill, and that Messrs. Taylor of Caroline, Tyler, Cabell and Pride, do prepare and bring in the same.

Ordered, That the petitions of sundry inhabitants of the county of Amherst, which lay on the table, be referred to the committee appointed to prepare and bring in a bill “to amend and reduce into one, the several acts for ‘for regulating and disciplining the militia.'”

And then the House adjourned till to-morrow morning, 10 o’clock.