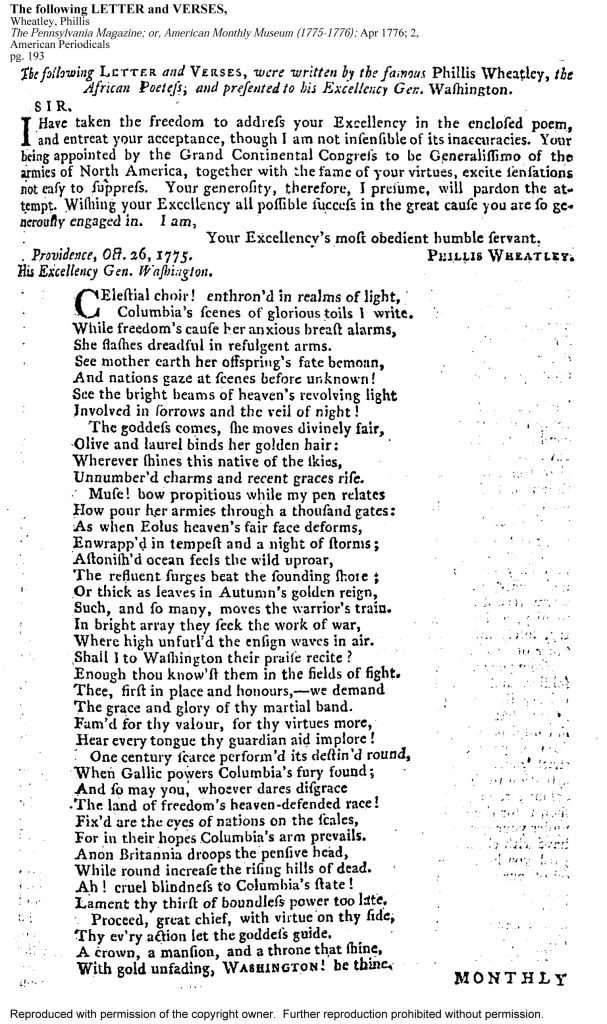 While freedom’s cause her anxious breast alarms,

She flashes dreadful in refulgent arms.

And nations gaze at scenes before unknown!

Involved in sorrows and the veil of night!

Wherever shines this native of the skies,

How pour her armies through a thousand gates:

Enwrapp’d in tempest and a night of storms;

Or thick as leaves in Autumn’s golden reign,

Such, and so many, moves the warrior’s train.

In bright array they seek the work of war,

Where high unfurl’d the ensign waves in air.

Shall I to Washington their praise recite?

Enough thou know’st them in the fields of fight.

The grace and glory of thy martial band.

Fam’d for thy valour, for thy virtues more,

One century scarce perform’d its destined round,

And so may you, whoever dares disgrace

The land of freedom’s heaven-defended race!

Fix’d are the eyes of nations on the scales,

For in their hopes Columbia’s arm prevails.

While round increase the rising hills of dead.

Lament thy thirst of boundless power too late.

Proceed, great chief, with virtue on thy side,

A crown, a mansion, and a throne that shine,

With gold unfading, Washington! be thine.