Skip to content
Author: General AssemblyTranscription Source: William Waller Hening, ed., The Statutes at Large; Being a Collection of All the Laws of Virginia from the First Session of the Legislature, in the Year 1619 (Richmond: J. & G. Cochran, 1821): 11:39–40.
FULL TEXT 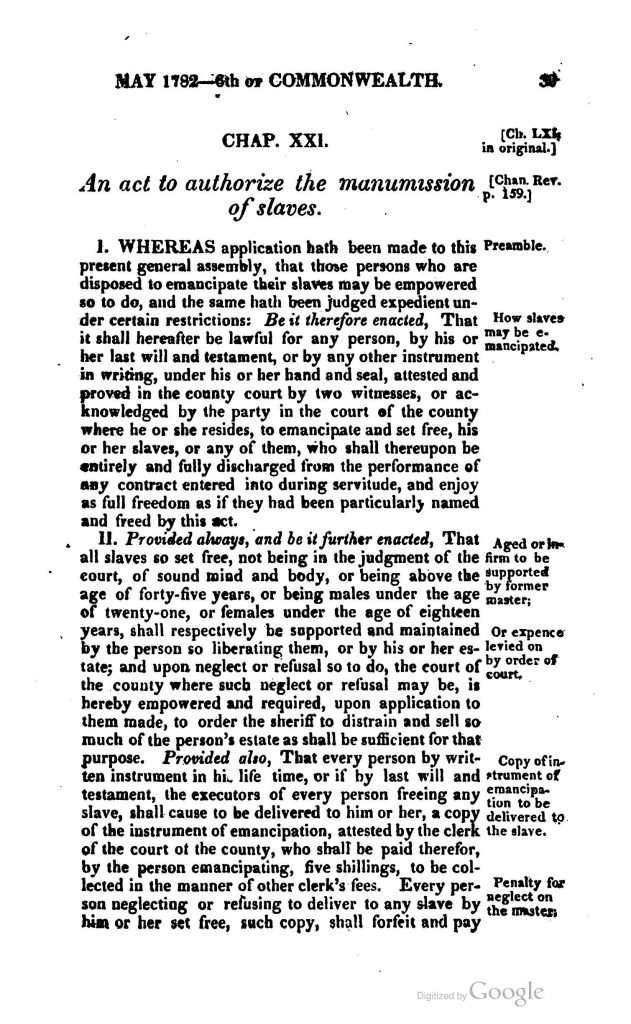 The Statutes at Large; Being a Collection of All the Laws of Virginia from the First Session of the Legislature, in the Year 1619, Volume 11, Page 39

I. WHEREAS application hath been made to this present general assembly, that those persons who are disposed to emancipate their slaves may be empowered so to do, and the same hath been judged expedient under certain restrictions: Be it therefore enacted, That it shall hereafter be lawful for any person, by his or her last will and testament, or by any other instrument in writing, under his or her hand and seal, attested and proved in the county court by two witnesses, or acknowledged by the party in the court of the county where he or she resides, to emancipate and set free, his or her slaves, or any of them, who shall thereupon be entirely and fully discharged from the performance of any contract entered into during servitude, and enjoy as full freedom as if they had been particularly named and freed by this act.

II. Provided always, and be it further enacted, That all slaves so set free, not being in the judgment of the court, of sound mind and body, or being above the age of forty-five years, or being males under the age of twenty-one, or females under the age of eighteen years, shall respectively be supported and maintained by the person so liberating them, or by his or her estate; and upon neglect or refusal to do so, the court of the county where such neglect or refusal may be, is hereby empowered and required, upon application to them made, to order the sheriff to distrain and sell so much of the person’s estate as shall be sufficient for that purpose. Provided also, That every person by written instrument in his life time, or if by last will and testament, the executors of every person freeing any slave, shall cause to be delivered to him or her, a copy of the instrument of emancipation, attested by the clerk of the court of the county, who shall be paid therefor, by the person emancipating, five shillings, to be collected in the manner of other clerk’s fees. Every person neglecting or refusing to deliver to any slave by him or her set free, such copy, shall forfeit and pay 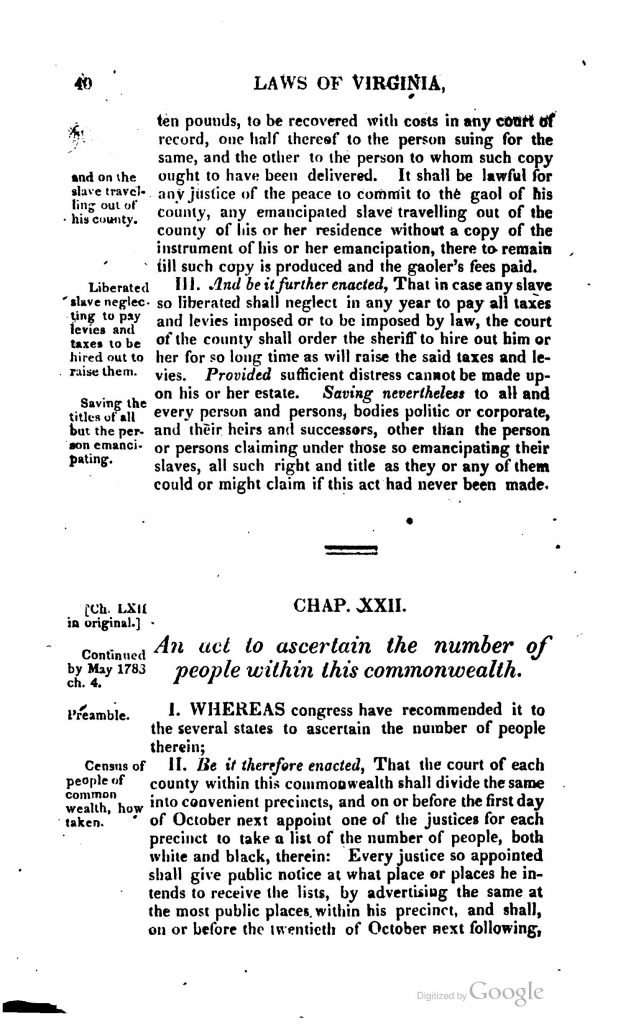 The Statutes at Large; Being a Collection of All the Laws of Virginia from the First Session of the Legislature, in the Year 1619, Volume 11, Page 40

ten pounds, to be recovered with costs in any court of record, one half thereof to the person suing for the same, and the other to the person to whom such copy ought to have been delivered. It shall be lawful for any justice of the peace to commit to the gaol of his county, any emancipated slave travelling out of the county of his or her residence without a copy of the instrument of his or her emancipation, there to remain till such copy is produced and the gaoler’s fees paid.

III. And be it further enacted, That in case any slave so liberated shall neglect in any year to pay all taxes and levies imposed or to be imposed by law, the court of the county shall order the sheriff to hire out him or her for so long time as will raise the said taxes and levies. Provided sufficient distress cannot be made upon his or her estate. Saving nevertheless to all and every person and persons, bodies politic or corporate, and their heirs and successors, other than the person or persons claiming under those so emancipating their slaves, all such right and titles as they or any of them could or might claim if this act had never been made.