Your letter of the 22d and the Reports, came duly to hand by yesterdays Post.

You will perceive by my rotation plan (with which you have been furnished—or rather by the notes annexed thereto) that if the fields allotted for Corn at the several farms were deemed inadequate to the consumption of this article, that such parts of the fields as were designed for Buck Wheat, as a Crop, might be converted to this purpose, and I repeat it again here; leaving the proportion thereof to your own judgment, with a proviso, however, that there be Buck Wheat enough sown to raise a sufficiency of Seed for all the purposes of my rotation system another year; as it is certainly a reflection upon a farmer to have his Seeds to buy. The reason why I prefered increasing the quantity of Corn ground in these fields, is, that nothing might interrupt the manurings of one field, at each farm, every year 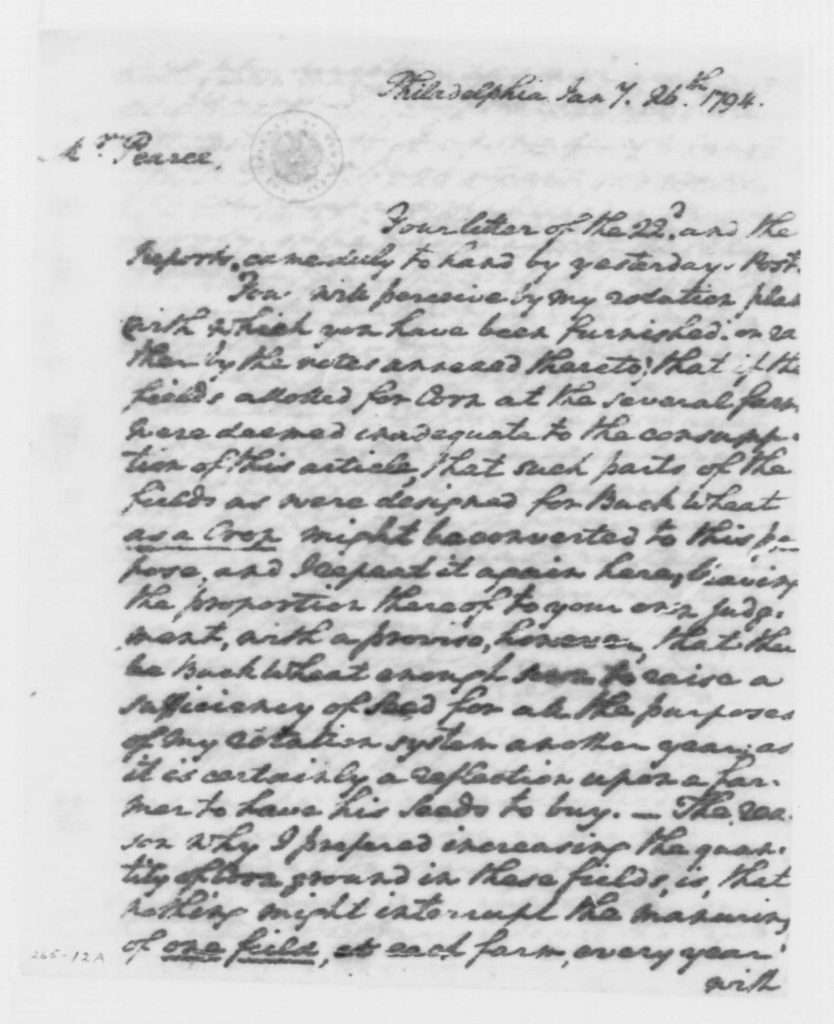 with green manure; whilst the Cowpens, & dung from the farm yards, would do the like to the poor parts of a second field, annually. By this means, and a judicious rotation, I am not without hope of bringing my land, in time, into a profitable state of cultivation; and unless some such practice as this prevails, my fields will be growing worse and worse every year, until the Crops will not defray the expence of the culture of them.

By the report of the week before last, it appeared that Stuart was plowing in No. 7; but as that field, according to the rotation which I have by me, was to remain this year in Pasture I could not account for it, otherwise than as a mistake in him, or a direction of mine which I had forgotten; the reason however of my mentioning the matter again, in this letter, is, that if that field is designed for Oats and Buck Wheat, the part, or such proportion thereof (as you like) which was designed for the latter, may go into Corn in like manner as is allowed at the other farms; but if it has not been touched, nor intended to be touched this year, (and I again desire that you 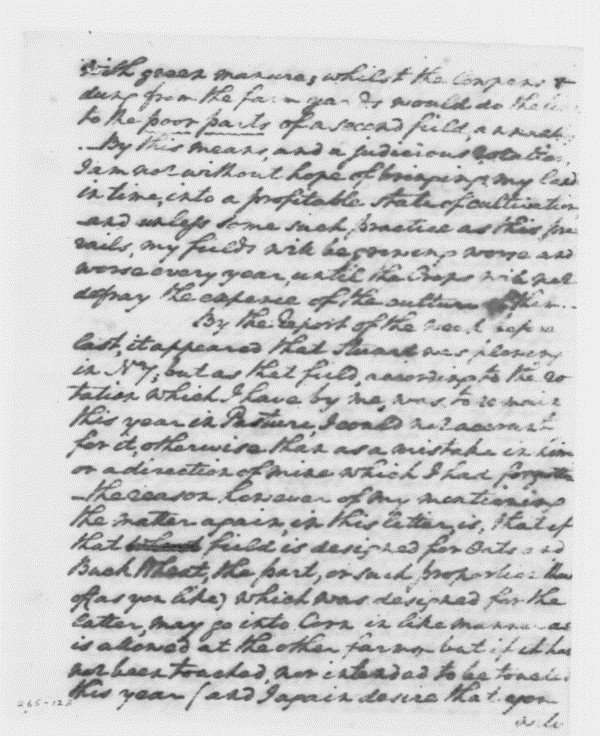 will not undertake more than you can execute well) then such part of No. 1. as you may deem proper may be put into Corn: or you may do what Stuart suggested to me before I left home4—namely—to plant all the good ground in both No. 1 & No. 3 with Corn & Sow all the broken & poor parts of them with Buck Wheat for manure; the same might be done at the other farms; remembering always, that these fields are to be sown with Wheat in the months of August & September next agreeably to the plan of Rotation, which you have.

I will send by the first vessel going round to Alexandria 14 bushls of Clover Seed, as I fear what you have (except of your own growth) is bad; and because I would not be sparing of Seed, either to the ground you have to sow, or that which has been sown, and is now missing. Of Timothy Seed I shall send more, as 10 bushels is sufficient I conceive to answer all your purposes; but it is to be feared that the Timothy & Orchard grass seeds have got mixed (as they are very much alike) for I am sure there was Orchard grass seed 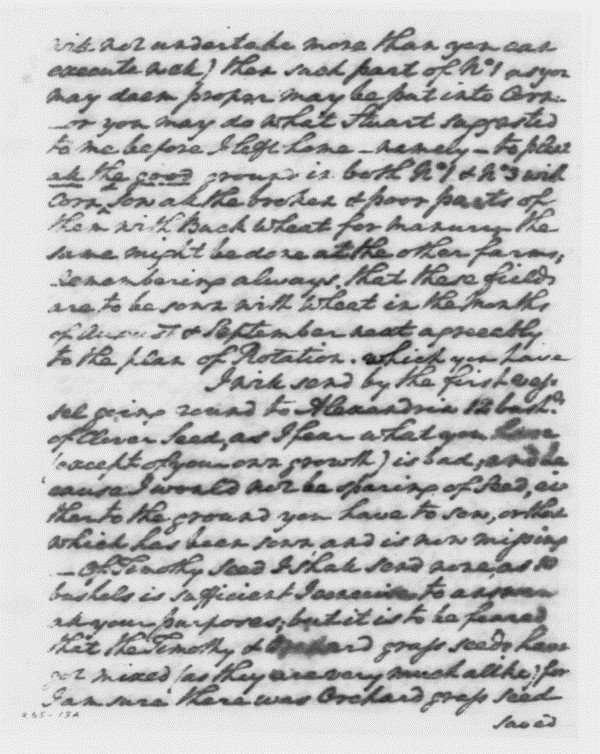 saved, & Butler and old Jack ought to know what was done with it. That you may know what dependence to place on the Clover seed which went from hence last year, & put into the Store mix it well together, & then promiscuously take out a certain (precise) number of seeds & see what proportion of them will come up. The Gardener can ascertain this, or by putting them under a brick on the ground, in a warm place, you can do it yourself. I shrewdly suspect that that seed was bad, even last year, otherwise the clover lot at the Mansion, and the Meadows at Union & Dogue run farms, would not be so dificient now (the latter after twice sowing in some parts).

Speaking of these Seeds, I must give you a hint of what I also very strongly suspect; and that is—that my Negro Seedsmen takes a considerable toll from every thing that goes into their hands—for this reason, make it an invariable rule before it is delivered to them, to mix in a bushel of Sand or well dried earth, as many pints of seed as you allow to an Acre, and let it be sown in this manner. Two valuable purposes are 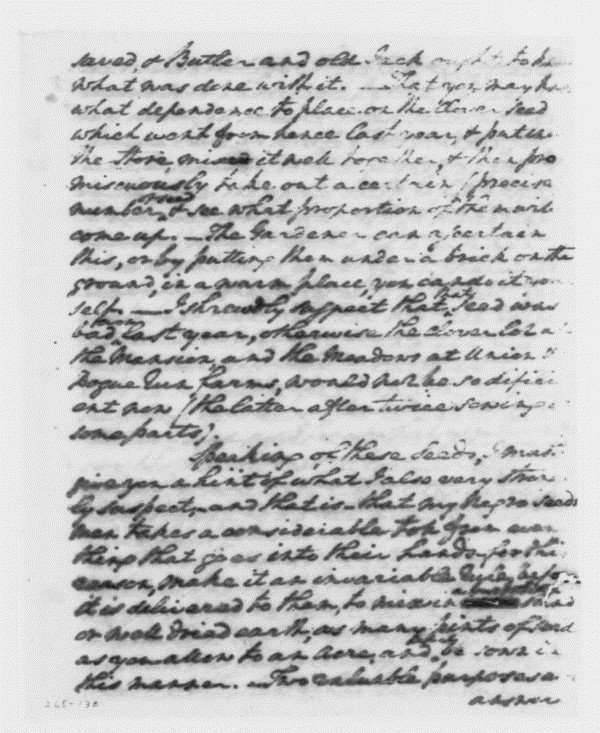 answered thereby-–1st in this State, the Seed is rendered unsaleable; and 2dly a person not skilled in sowing small seeds, will do it more regularly when thus mixed; for being accustomed to sow a bushel of Wheat to the Acre, the same cast, & fill of the hand, does for the small Seed when so mixed; in doing of which pains is to be taken that the mixture is perfect; otherwise one part of the Acre will have more sand & less seed than the other, & so vice, versa.

Give what manure you can to the lot at Mansion house which is to be sown with Oats and grass seeds; or to the one which is to be planted with Potatoes, as circumstances and your own judgment shall direct: for both, I do not presume there is dung enough. It is better to do one well than both by halves.

The Ground between No. 6 at River farm, and the Barn lane, you may apply to the purposes mentioned in your letter of the 22d, & let it remain under the fence which incloses No. 6 until a division fence can be run. It my be worth some consideration whether 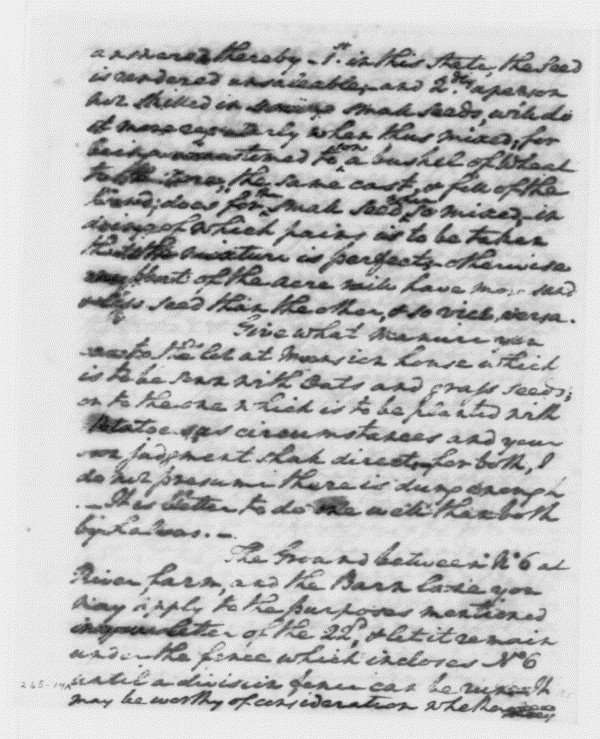 Potatoes (if some part of the Clover lot in front of the Barn does not require to be broke up) ought not to be planted in part of it.

You may continue to eat of my meat, as the white people will take it after it goes from your table, until your family arrives, and afterwards also if it shall be found more convenient than to keep seperate stocks, as I believe it will. I perceive Thomas Green draws fine flour from the Mill when the Miller & others are content with Midlings; and which I am sure is good enough for him. Does his agreement in this respect differ from the others? 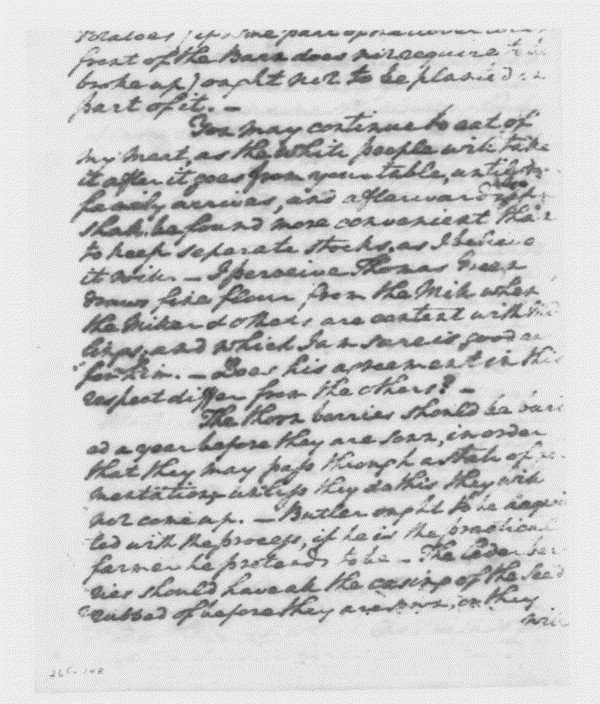 will not come up.

Mr Dulany is right in his application, but when you pay him the hundred dollars (which is herein sent you) take his receipt for £150 pounds on Acct of the Rent due to Mrs French for the year 1793; and give him a receipt for £120 for the Rent he owes me, for the same year.

There is part of the Wages for 1793 due to the Estate of Mr Anthony Whiting; but how much I am unable at this moment to say presisely. They commenced the first of Jany and he died about the middle of June, but how much of my money which was in his hands he may have applied to his own use I cannot, without some investigation, decide. If the Administrators have any thing which leads to this, obtain it from them, that the Acct may be closed; as I do not want to keep them out of what is due, a day. I remain Your friend &ca