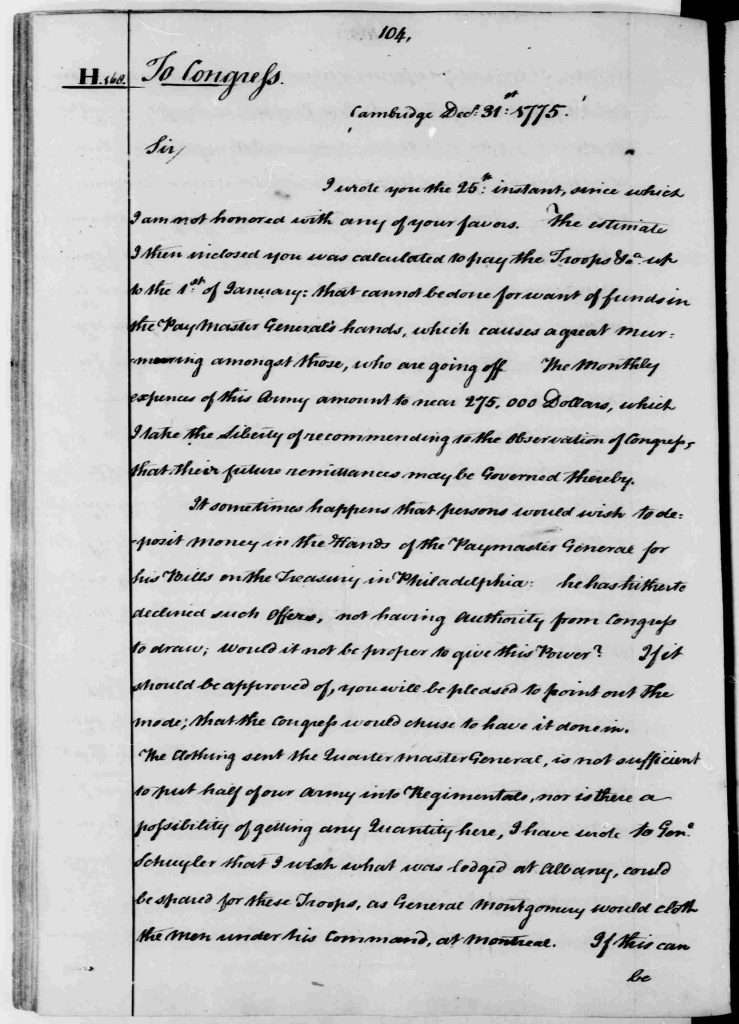 I wrote you the 25th instant, Since which I am not honoured with any of your favours—the estimate I then inclosed you, was Calculated to pay the troops &a up to the first of January—that Cannot be done for want of funds in the Paymaster General’s hands—which Causes a great murmuring amongst those, who are going of.

the monthly expences of this Army amt to near 275,000 Dollars, which I take the Liberty of reccommending to the observation of Congress that their future remittences may be governed thereby.

it Sometimes happens, that persons woud wish to deposit money in the hands of the Paymaster General, for his bills on the Treasury at Philadelphia—he has hitherto declined Such offers—not haveing authority from Congress to draw—woud it not be proper to give this power? if it Should be approved of—you will please to point out the mode, that the Congress woud chuse to have it done in.

the clothing Sent to the Quarter master Genl is Not Sufficient to put halfe our Army into Regimentals, nor is there a possibility of getting any quantity here. I have wrote to General Schuyler, that I wish what was Lodged at Albany, Coud be Spared for these troops—as General Montgomery woud cloath the men under his Command at Montreal, if this Can 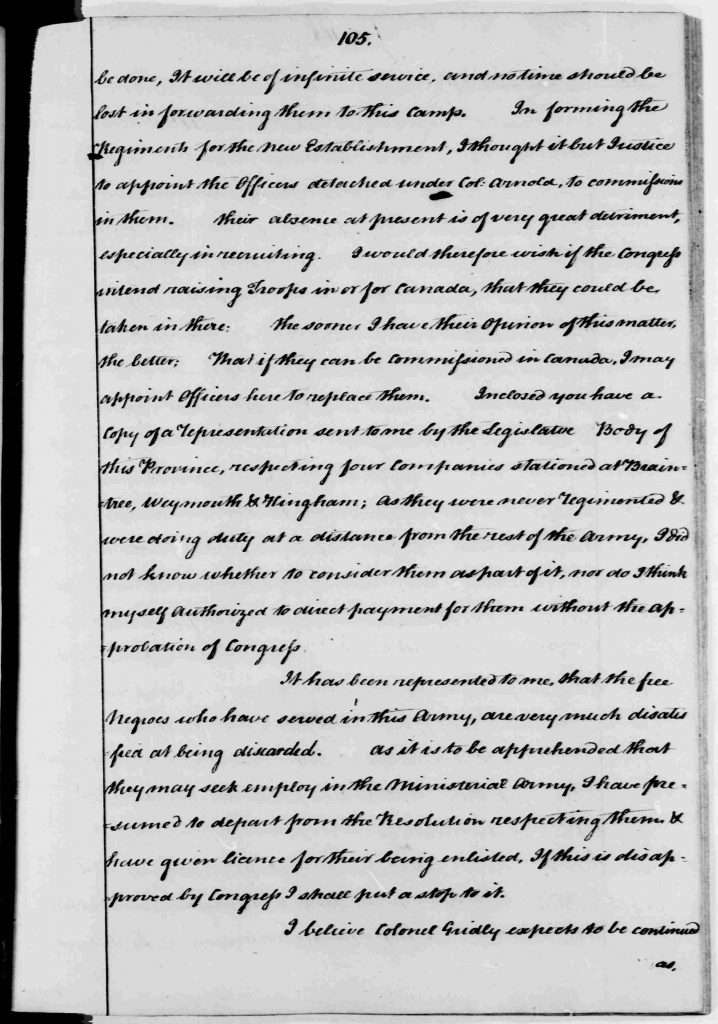 be done, it will be of infinit Service, & no time shou’d be Lost in forwarding them to this Camp.

In forming the Regiments for the new establishment—I thought it but justice, to appoint the Officers detached under Colonel Arnold, to Commissions in them—their absence at present is of very great detriment to the Service, especially in recruiting—I woud therefore wish, if the Congress intend raiseing troops in or for Canada that they Coud be taken in there—the Sooner I have their oppinion of this matter, the better—that if they Can be Commissioned in Canada, I may appoint Officers here to replace them.

Inclosed you have Copy of a Representation Sent to me by the Legislative Body of this Province respecting four Companies Stationed at Braintree Weymouth & Hingham—as they were never Regimented and were doing duty at a distance from the rest of the Army, I did not Know whether to Consider them as a part of it—nor do I think myselfe authorized to direct payment for them, without the approbation of Congress.

it has been represented to me that the free negroes who have Served in this Army, are very much disatisfied at being discarded—as it is to be apprehended, that they may Seek employ in the ministerial Army—I have presumed to depart from the Resolution respecting them, & have given Licence for their being enlisted, if this is disapproved of by Congress, I will put a Stop to it.

I believe Colonel Gridley expects to be Continued 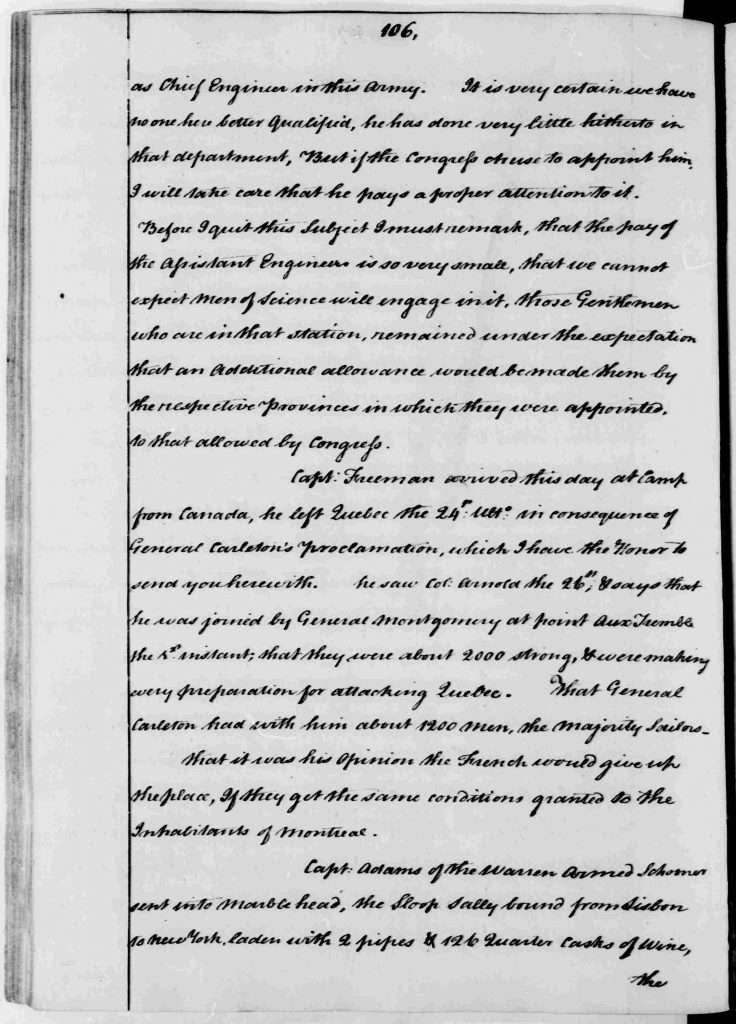 as Chief Engineer in this Army—it is very Certain, that we have no one here, better qualifyed, he has don very little hitherto in that department—but if the Congress chuse to appoint him—I will take Care that he pays a proper attention to it—before I quit this Subject I must remark, that the pay of the Assistant Engineers is So very Small, that we Cannot expect men of Science will engage in it—those Gentlemen who are in that Station, remaind under the expectation, that an additional allowance woud be made them, by the respective Provinces, in which they were appointed, to that, allowed by the Congress.

Captain Freeman, arrived this day at Camp from Canada, he Left Quebec the 24th ultmo in Consequence of General Carletons proclomation, which I have the honor to Send you herewith—he Saw Col. Arnold the 26th—and Says that he was joind at Point au Tremble by General Montgomery the 1st instant that they were about 2000 Strong & were Makeing every preparation for attacking Quebec, that General Carleton had with him about 1200 men, the majority of whom are Sailors, that it was his oppinion, the French woud give up the place, if they get the Same Conditions granted to the Inhabitants of Montreal.

Captain Adams, of the Warren armed Schooner Sent into Marblehead the sloop Sally, bound from Lisbon to Newyork Laden with 2 pipes and 126 Qr Casks of wine— 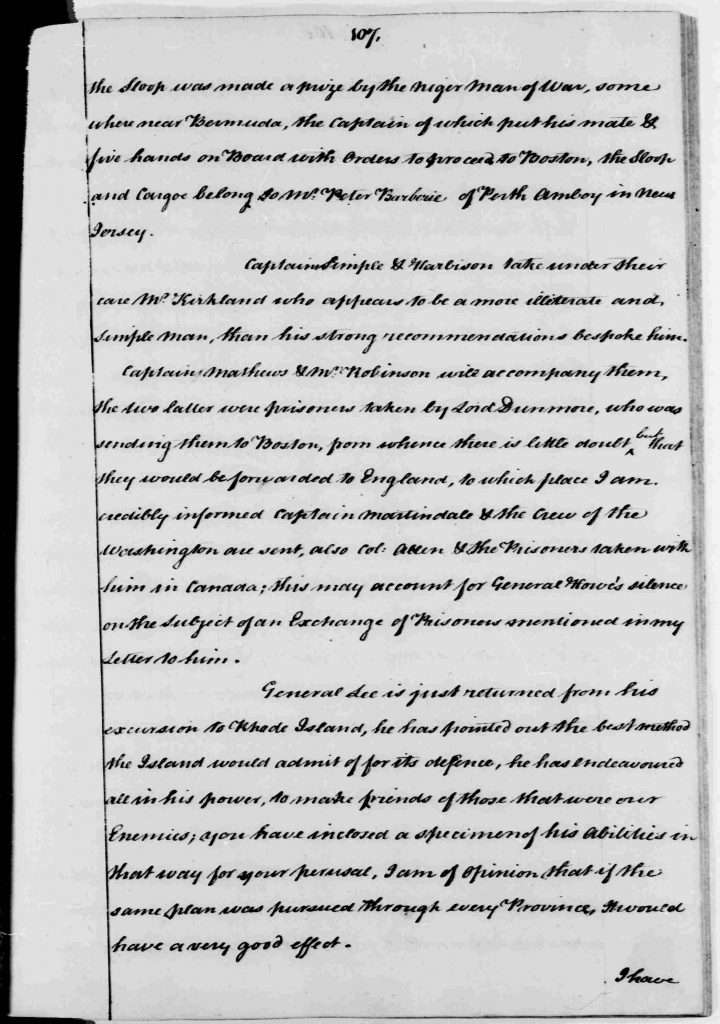 this sloop was made a prize of by the Niger man of War, Somewhere near Bermudas, the Captain of whom put his Mate & five hands on board with orders to proceed with her to Boston, the sloop & Cargo belongs to Mr Peter Barberie of Perth Amboy in newjersey.

Captains Semple & Harbeson take under their Care Mr Kirkland who appears to be a much more illiterate & Simple man, than his Strong reccommendations bespake him—Captain Mathis & Mr Robinson will accompany them—the two Later were prisoners taken by Lord Dunmore who was Sending them to Boston, from whence there is Little doubt, but that they would be forwarded to England, to which place, I am Credibly informed, Captain Martindale & the Crew of the Washington are Sent, allso Colonel Allen & the Prisoners taken with him in Canada, this may account for General Howes Silence on the Subject of an Exchange of Prisoners, mentioned in my Letter to him.

General Lee is just returned from his excursion to Rhode Island, he has pointed out the best method, the Island woud admit of, for its defence—he has endeavourd all in his power, to make freinds of those that were our enemies, you have inclosed a Specimen of his abilities in that way, for your perusal, I am of oppinion, that if the Same plan was pursued thorough every Province, it would have a very good effect. 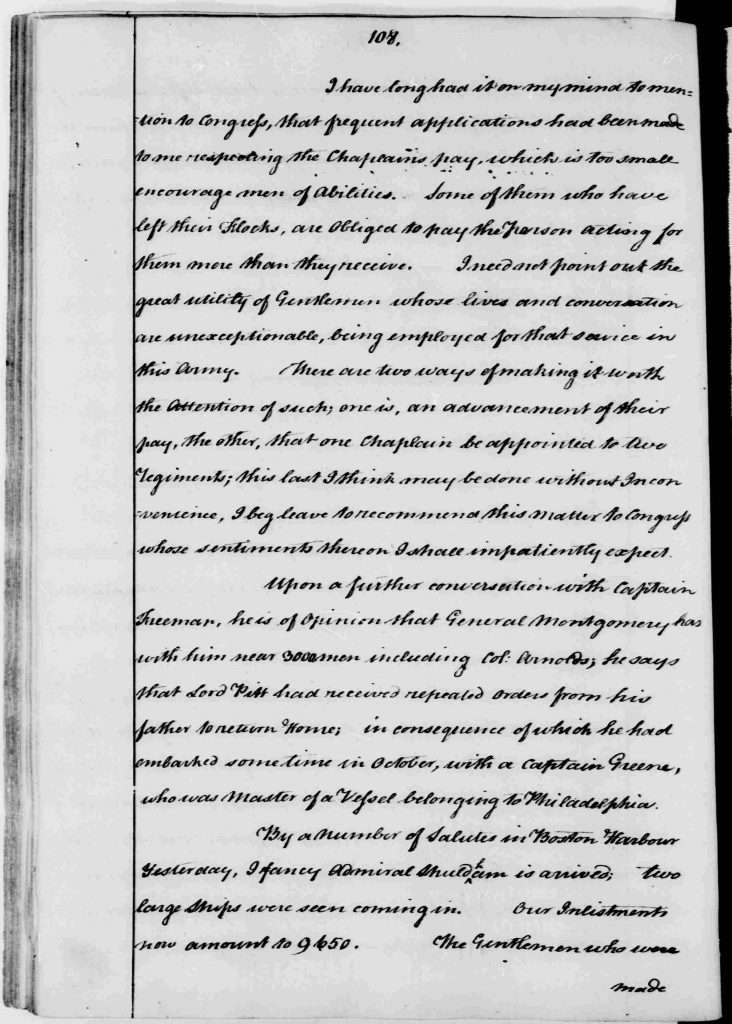 I have Long had it on my mind to mention to Congress, that frequent applications had been made to me, respecting the Chaplains pay—which is too Small to encourage men of Abilities—Some of them who have Left their flocks, are obliged to pay the parson acting for them, more than they receive—I need not point out the great utility of Gentlemen whose Lives & Conversation are unexceptionable, being employed for that Service, in this Army, there are two ways of makeing it worth the attention of Such—one is, an advancement of their pay, the other, that one Chaplain be appointed to two Regiments, this Last I think may be done without inconvenience I beg Leave to reccommend this matter to Congress whose Sentiments hereon, I Shall impatiently expect.

upon a further Conversation with Captain Freeman—he is of opinion that General Montgomery has with him near 3000 men Includeing Col. Arnolds—he Says that Lord Pit, had received repeated orders from his father to return home—in Consequence of which he had embarked Sometime in October, with a Captain Green who was Master of a vessell, belonging to Philadelphia.

By a number of Salutes in Boston Harbour yesterday I fancy Admiral Shuldam is arrived two Large ships were Seen Comeing in.

Our Inlistments now amount to 9650.

Those Gentlemen who were 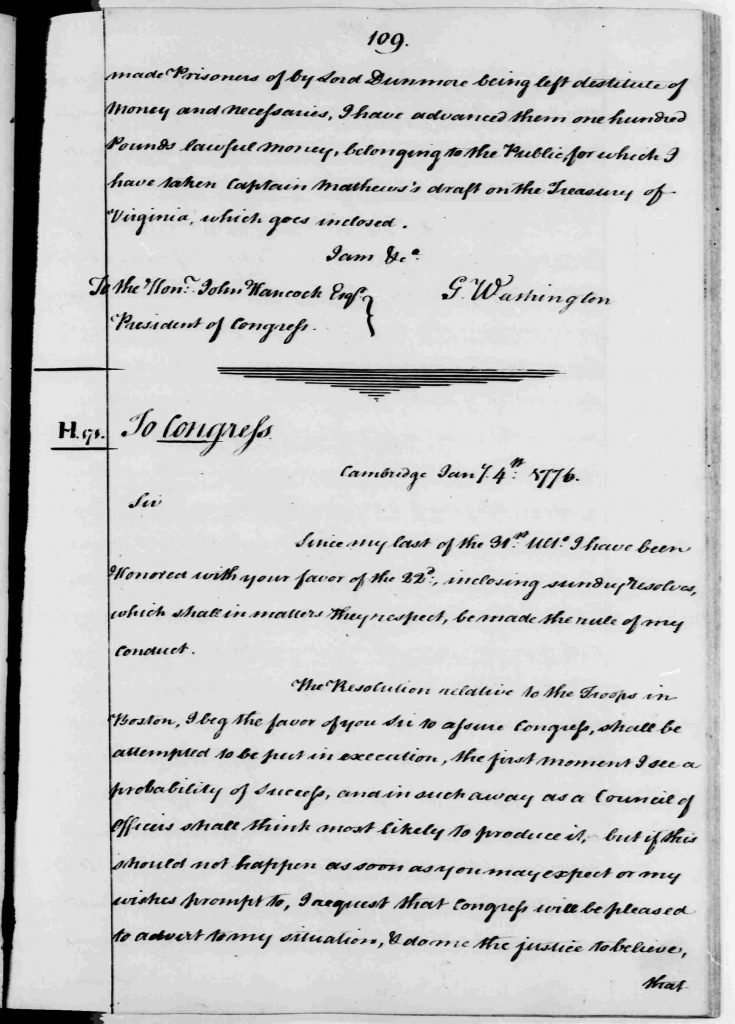 made prisoners of by Lord Dunmore being Left destitute of money & necessarys I have advanced them One hundred pounds Lawfull money belonging to the publick, for which I have taken Capt. Mathews draft on the Treasury of Virginia, which goes inclosed—I have the honour to be Sir Your Most Obedt H. St

P.S. you have inclosed the Returns of the Army.