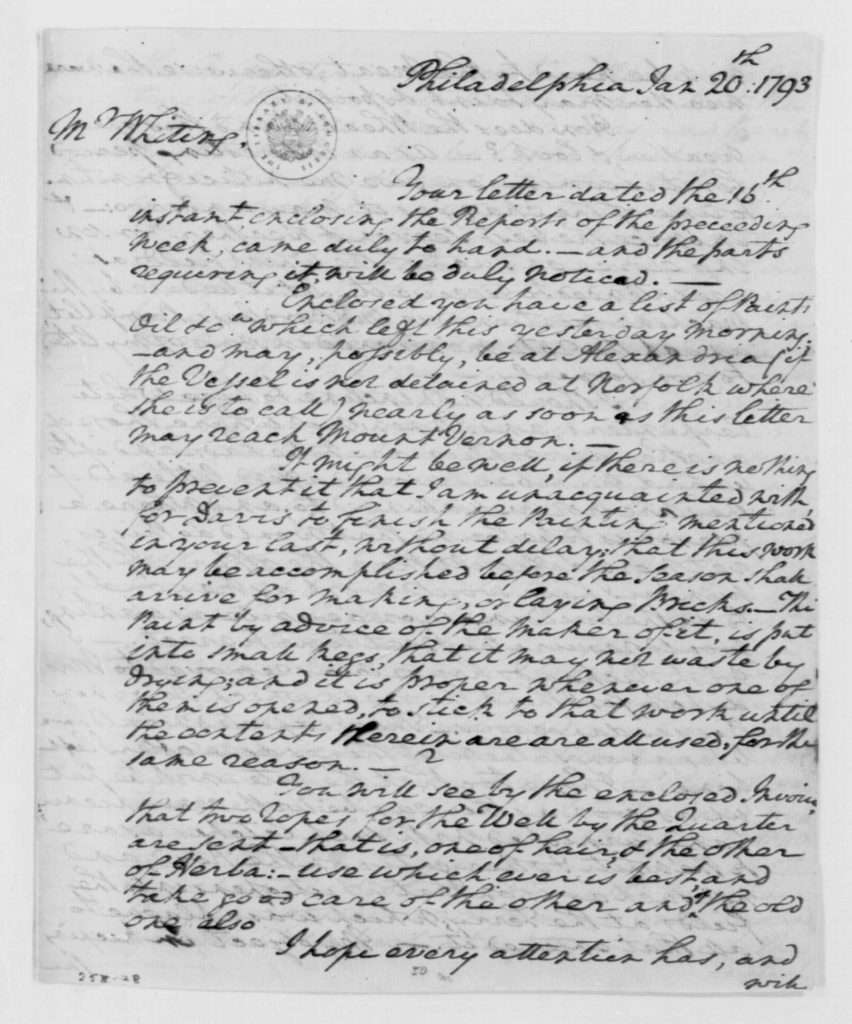 Your letter dated the 16th instant, enclosing the Reports of the preceeding week, came duly to hand. and the parts requiring it, will be duly noticed.

Enclosed you have a list of Paints Oil &ca which left this yesterday morning; and may, possibly, be at Alexandria (if the Vessel is not detained at Norfolk where she is to call) nearly as soon as this letter may reach Mount Vernon.

It might be well, if there is nothing to prevent it that I am unacquainted with, for Davis to finish the Painting mentioned in your last, without delay; that this work may be accomplished before the Season shall arrive for making, or laying Bricks. The Paint by advice of the maker of it, is put into small kegs, that it may not waste by drying; and it is proper whenever one of them is opened, to stick to that work until the contents therein are all used, for the same reason.

You will see by the enclosed Invoice, that two Ropes for the Well by the Quarter are sent—that is, one of hair, & the other of Herba: use which ever is best, and take good care of the other and of the old one also.

I hope every attention has, and 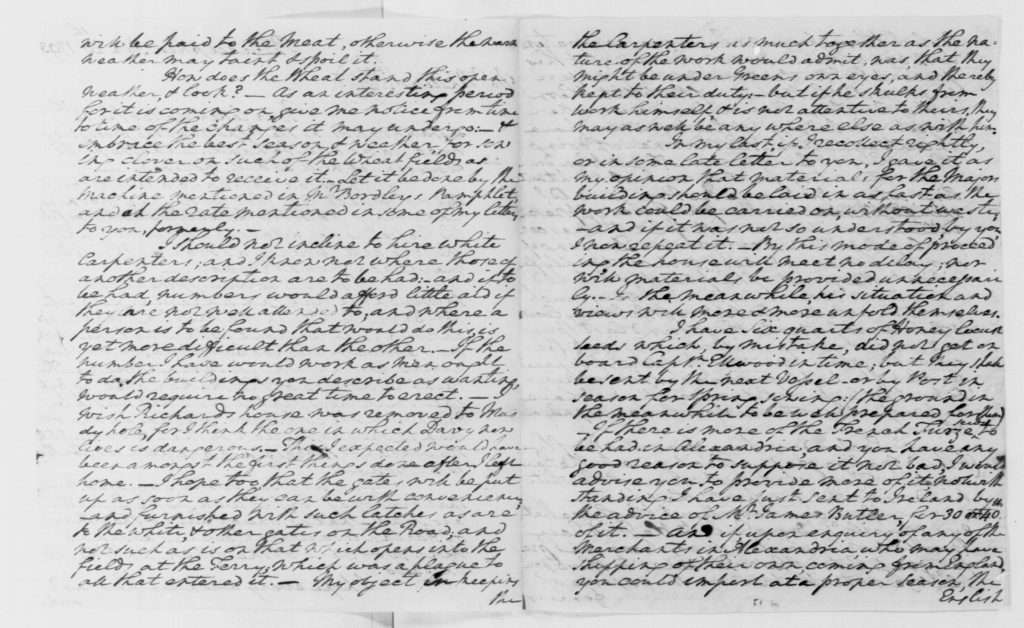 will be paid to the Meat, otherwise the warm weather may taint & spoil it.

How does the Wheat stand this open weather, & look? As an interesting period for it is coming on, give me notice from time to time of the changes it may undergo: & embrace the best season, & weather, for sowing clover on such of the Wheat fields as are intended to receive it. Let it be done by the machine mentioned in Mr Bordleys Pamphlet, and at the rate mentioned in some of my letters to you, formerly.

I should not incline to hire white Carpenters; and I know not where those of another description are to be had: and if to be had, numbers would afford little aid if they are not well attended to; and where a person is to be found that would do this, is yet more difficult than the other. If the number I have would work as men ought to do, the buildings you describe as wanting, would require no great time to erect. I wish Richards house was removed to Muddy hole, for I think the one in which Davy now lives is dangerous. This I expected would have been amongst the first things done after I left home. I hope too, that the gates will be put up as soon as they can be with convenience; and furnished with such latches as are to the white, & other gates on the Road; and not such as is on that which opens into the fields at the Ferry; which was a plague to all that entered it. My object in keeping

the Carpenters as much together as the nature of the work would admit, was, that they might be under Greens own eyes, and thereby kept to their duty: but if he skulks from work himself, & is not attentive to theirs, they may as well be any where else as with him.

In my last, if I recollect rightly, or in some late letter to you, I gave it as my opinion that materials for the Majors building should be laid in as fast as the work could be carried on, without waste; and if it was not so understood, by you, I now repeat it. By this mode of proceeding, the house will meet no delay; nor will materials be provided unnecessarily. In the meanwhile, his situation and views will more & more unfold themselves.

I have Six quarts of Honey locust Seeds which, by mistake, did not get on board Captn Ellwood in time; but they shall be sent by the next Vessel—or by Post in season for Spring sowing: (the ground in the meanwhile to be well prepared for them)—If there is more of the French Furze seeds to be had in Alexandria, and you have any good reason to suppose it not bad, I would advise you to provide more of it, notwithstanding I have just sent to Ireland by the advice of Mr James Butler, for 30 or 40 lbs. of it. And if, upon enquiry of any of the Merchants in Alexandria, who may have shipping of their own, coming from England, you could import at a proper Season, the 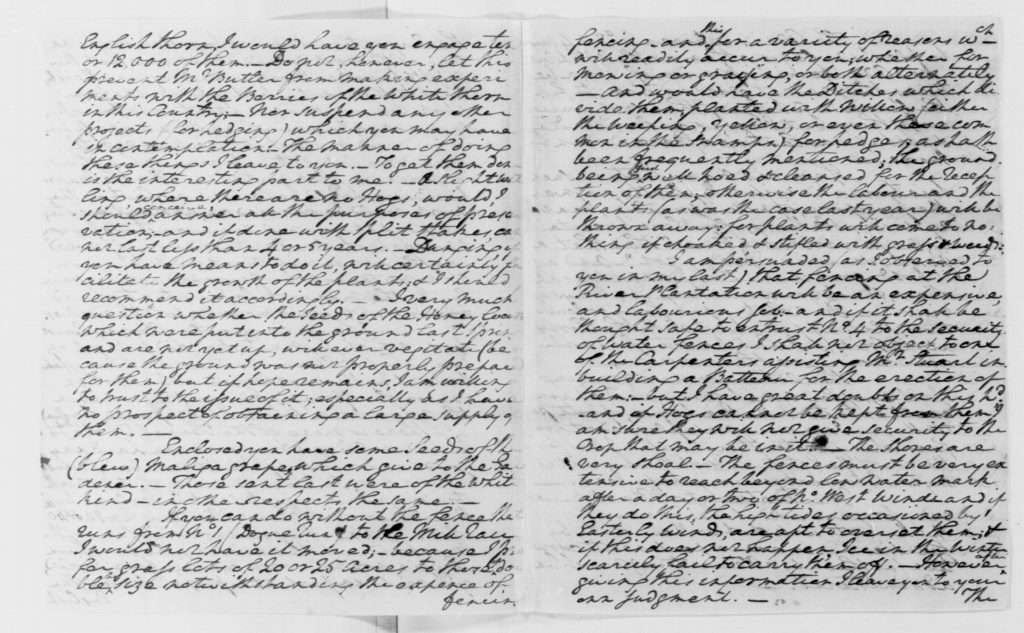 English thorn, I would have you engage ten or 12,000 of them. Do not, however, let this prevent Mr Butler from making experiments with the Berries of the White thorn in this Country; Nor suspend any other projects (for hedging) which you may have in contemplation. The manner of doing these things I leave to you. To get them done is the interesting part to me. A slight Watling, where there are no Hogs, would, I should conceive, answer all the purposes of preservation; and if done with Split Stakes, can not last less than 4 or 5 years. Dunging, if you have means to do it, will certainly facilitate the growth of the plants; & I should recommend it accordingly. I very much question whether the Seeds of the Honey locust which were put into the ground last Spring and are not yet up, will ever vegitate (because the ground was not properly prepared for them) but if hope remains, I am willing to trust to the issue of it; especially as I have no prospect of obtaining a large supply of them.

Enclosed you have some Seeds of the (blew) Maliga grape, which give to the Gardener. Those sent last were of the white kind—in other respects the same.

If you can do without the fence that Runs from No. 1 (Dogue Run) to the Mill Race I would not have it moved; because I prefer grass lots of 20 or 25 Acres to those of double the size notwithstanding the expence of

fencing—and this for a variety of reasons wch—will readily occur to you; whether for Mowing or graising, or both alternately—And would have the Ditches which divide them, planted with Willow (either the Weeping, yellow, or even those common in the Swamps) for hedges; as hath been frequently mentioned; the ground being first well hoed & cleansed for the Reception of them; otherwise the labour and the plants (as was the case last year) will be thrown away: for plants will come to nothing if choaked, & stifled with grass & weeds.

I am persuaded (as I observed to you in my last) that fencing at the River Plantation will be an expensive, and labourious job: and if it shall be thought safe to entrust No. 4 to the security of Water fences I shall not object to one of the Carpenters assisting Mr Stuart in building a Batteau for the erection of them: but I have great doubts on this hd; and if Hogs cannot be kept from them I am sure they will not give security to the Crop that may be in it. The Shores are very shoal. The fences must be very extensive to reach beyond low water mark after a day or two of No. West Winds—and if they do this, the high tides occasioned by Easterly Winds, are apt to overset them; & if this does not happen, Ice in the Winter scarcely fail to carry them off. However after giving this information I leave you to your own judgment. 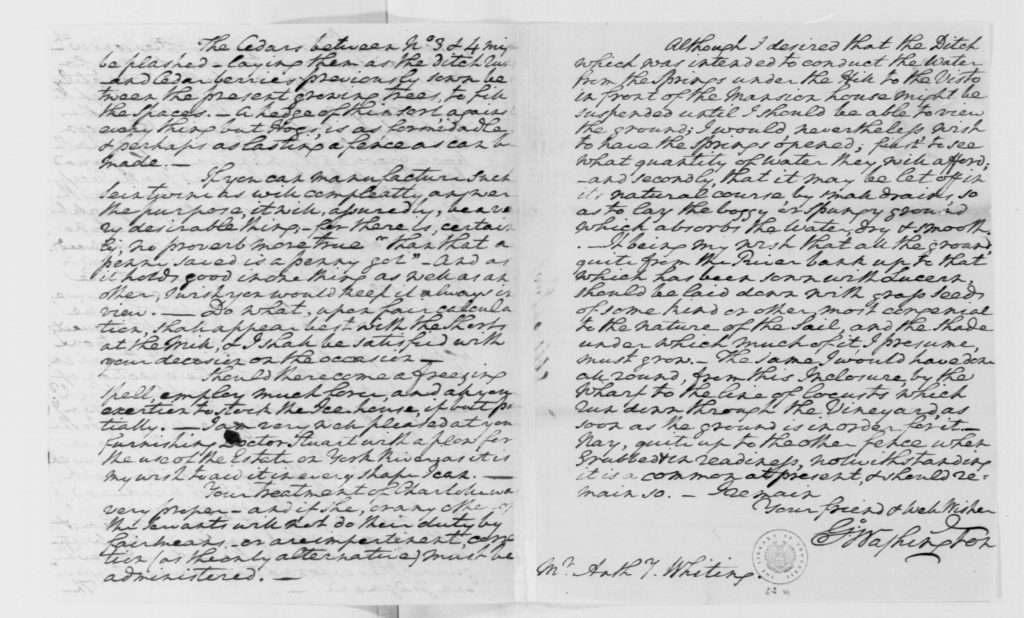 The Cedars between No. 3 & 4 might be plashed—laying them as the ditch Runs—and Cedar berries previously sown between the present growing trees, to fill the Spaces. A hedge of this sort, against every thing but Hogs, is as formidadle, & perhaps as lasting a fence as can be made.

If you can manufacture Such Sein twine as will compleatly answer the purpose, it will, asuredly, be a very desirable thing; for there is, certainly, no proverb more true “than that a penny Saved is a penny got”—And as it holds good in one thing as well as another, I wish you would keep it always in view. Do what, upon fair calculation, shall appear best with the Shorts at the Mill, & I shall be satisfied with your decision on the occasion.

Should there come a freezing spell, employ much force, and all your exertion to stock the Ice-house, if but partially. I am very well pleased at your furnishing Doctor Stuart with a plow for the use of the Estate on York River; as it is my wish to aid it in every shape I can.

Your treatment of Charlotte was very proper—and if she, or any other—of the Servants will not do their duty by fair means—or are impertinent, correction (as the only alternative) must be administered.

Although I desired that the Ditch which was intended to conduct the Water from the Springs under the Hill to the Visto in front of the Mansion house might be suspended until I should be able to view the ground; I would, nevertheless, wish to have the Springs opened; first to see what quantity of water they will afford; and secondly, that it may be let off in its natural course, by small drains, so as to lay the boggy or Spungy ground which absorbs the Water, dry & smooth. It being my wish that all the ground, quite from the River bank up to that which has been sown with Lucern, should be laid down with grass Seeds of some kind or other, most congenial to the nature of the Soil, and the shade under which much of it, I presume, must grow. The same I would have done all round, from this Inclosure, by the Wharf to the line of locusts which Run down through the Vineyard, as soon as the ground is in order for it. Nay, quite up to the other fence when Grubbed & in readiness, notwithstanding it is a common at present, & should remain so. I remain Your friend & Well Wisher