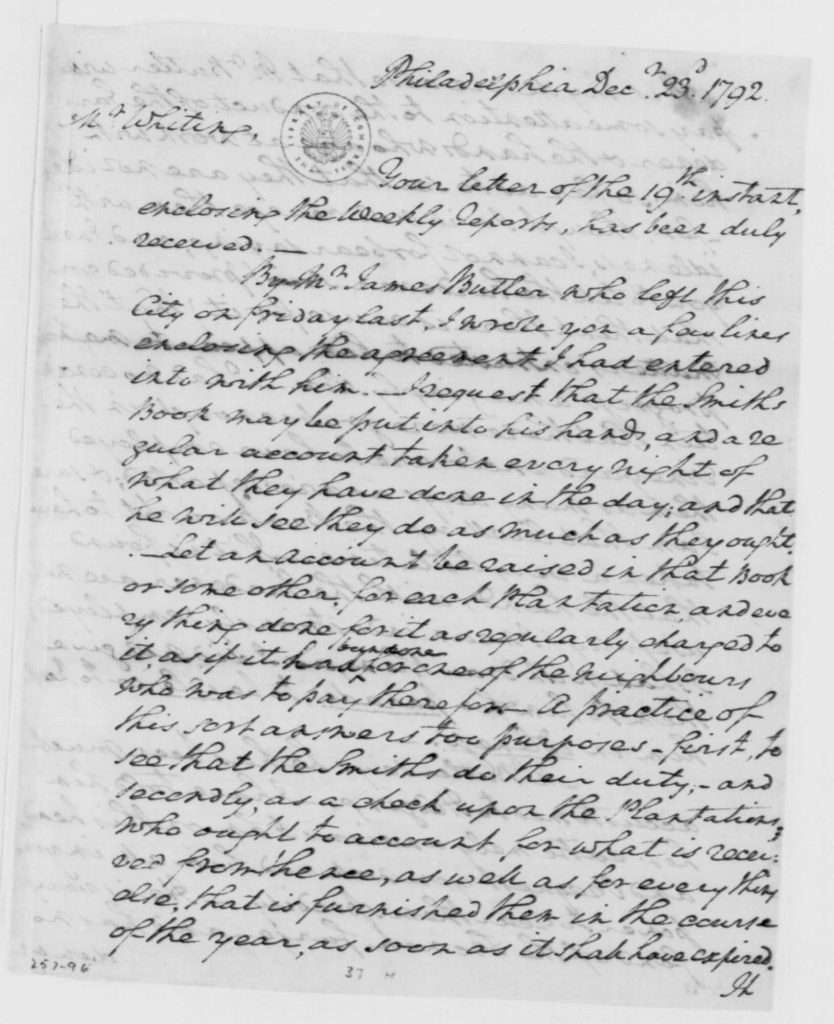 Your letter of the 19th instant, enclosing the weekly reports, has been duly received.

By Mr James Butler who left this City on friday last, I wrote you a few lines enclosing the agreement I had entered into with him. I request that the Smiths Book may be put into his hands, and a regular account taken every night of what they have done in the day; and that he will see they do as much as they ought. Let an Account be raised in that Book or some other, for each Plantation, and every thing done for it as regularly charged to it, as if it had been done for one of the neighbours who was to pay therefor. A practice of this sort answers too purposes—first, to see that the Smiths do their duty; and secondly, as a check upon the Plantations; who ought to account for what is received from thence, as well as for every thing else, that is furnished them in the course of the year, as soon as it shall have expired. 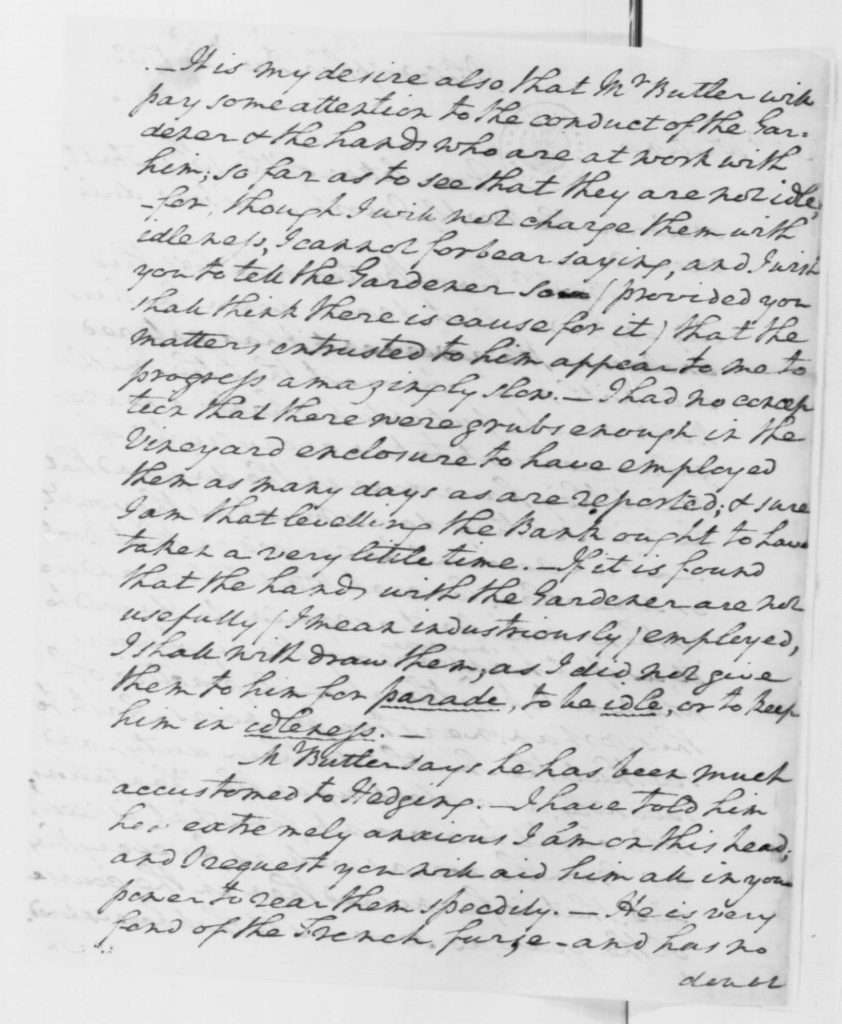 It is my desire also that Mr Butler will pay some attention to the conduct of the Gardener & the hands who are at work with him; so far as to see that they are not idle; for, though I will not charge them with idleness, I cannot forbear saying, and I wish you to tell the Gardener so (provided you shall think there is cause for it) that the matters entrusted to him appear to me to progress amazingly slow. I had no conception that there were grubs enough in the Vineyard enclosure to have employed them as many days as are reported; & sure I am that levelling the Bank ought to have taken a very little time. If it is found that the hands with the Gardener are not usefully (I mean industriously) employed, I shall withdraw them; as I did not give them to him for parade, to be idle, or to keep him in idleness.

Mr Butler says he has been much accustomed to Hedging. I have told him how extremely anxious I am on this head; and I request you will aid him all in your power to rear them speedily. He is very fond of the French furze—and has no 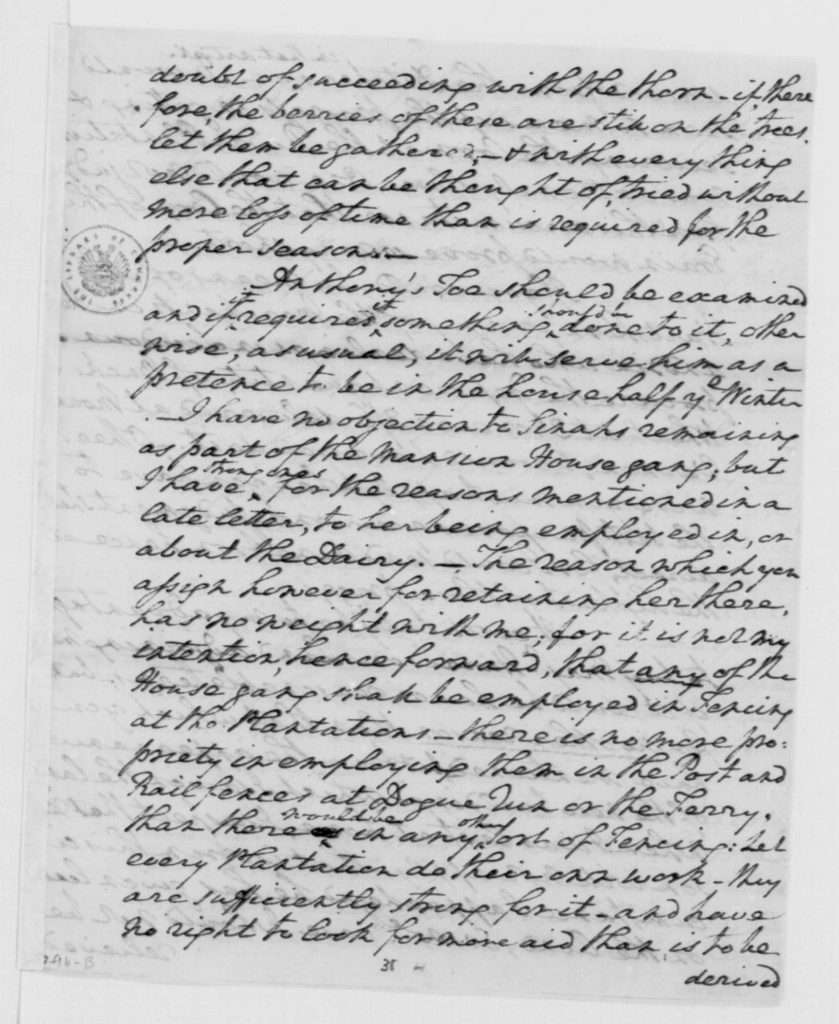 doubt of succeeding with the thorn—if, therefore, the berries of these are still on the trees, let them be gathered; & with every thing else that can be thought of, tried without more loss of time than is required for the proper season.

Anthony’s Toe should be examined and if it requires it something should be done to it, otherwise, as usual, it will serve him as a pretence to be in the house half the Winter. I have no objection to Sinah’s remaining as part of the Mansion House gang; but I have strong ones for the reasons mentioned in a late letter, to her being employed in, or about the Dairy. The reason which you assign however for retaining her there, has no weight with me; for it is not my intention, hence forward, that any of the House gang shall be employed in Fencing at the Plantations—there is no more propriety in employing them in the Post and Rail fences at Dogue run or the Ferry, than there would be in any other Sort of Fencing: Let every Plantation do their own work—they are sufficiently strong for it—and have no right to look for more aid than is to be 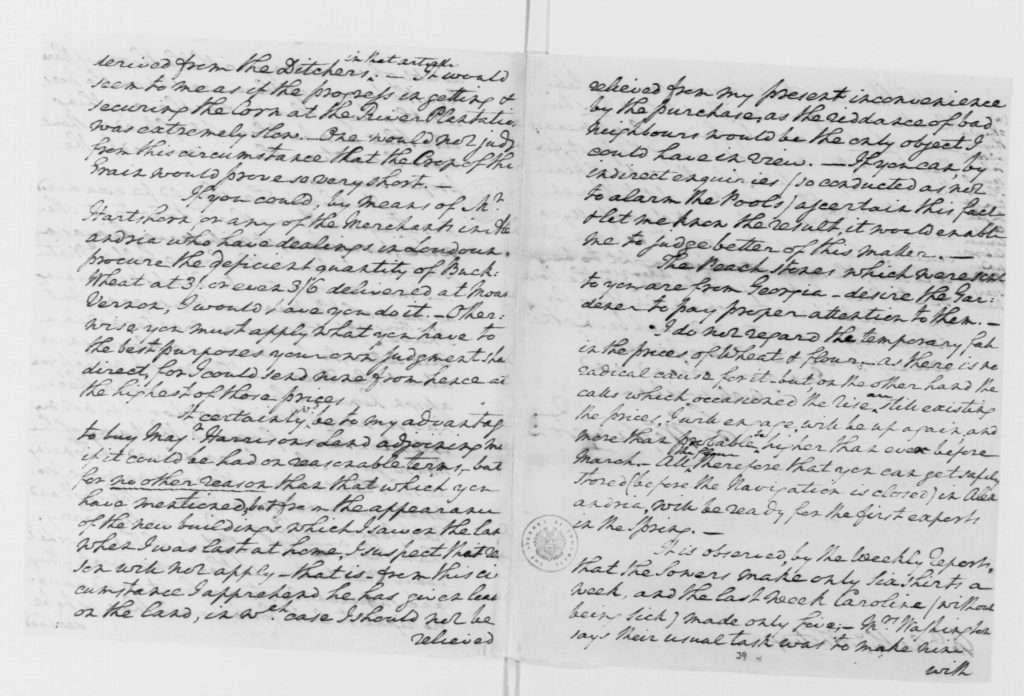 derived from the Ditchers in that article. It would seem to me as if the progress in getting & securing the Corn at the River Plantation was extremely slow. One would not judge from this circumstance that the Crop of this Grain would prove so very short.

If you could, by means of Mr [William] Hartshorn, or any of the Merchants in Alexandria who have dealings in Loudoun, procure the deficient quantity of BuckWheat at 3/ or even 3/6 delivered at Mount Vernon, I would have you do it. Otherwise you must apply what you have to the best purposes your own judgment shall direct, for I could send none from hence at the highest of those prices.

It certainly wd be to my advantage to buy Majr Harrisons Land adjoining mine if it could be had on reasonable terms; but for no other reason than that which you have mentioned; but from the appearance of the new buildings which I saw on the land when I was last at home, I suspect that reason will not apply—that is—from this circumstance I apprehend he has given lease on the land, in wch case I should not be

relieved from my present inconvenience by the purchase; as the riddance of bad neighbours would be the only object I could have in view. If you can, by indirect enquiries (so conducted as not to alarm the Pools) ascertain this fact & let me know the result, it would enable me to judge better of this matter.

The Peach stones which were sent to you are from Georgia—desire the Gardener to pay proper attention to them.

I do not regard the temporary fall in the prices of Wheat & flour; as there is no radical cause for it—but, on the other hand the calls which occasioned the rise are still existing the prices, I will engage, will be up again; and more than probable be higher than ever before March. All the flour therefore that you can get safely stored (before the Navigation is closed) in Alexandria, will be ready for the first exports in the Spring.

It is observed, by the weekly reports, that the Sowers make only Six shirts a week, and the last week Caroline (without being sick) made only five; Mrs Washington says their usual task was to make nine 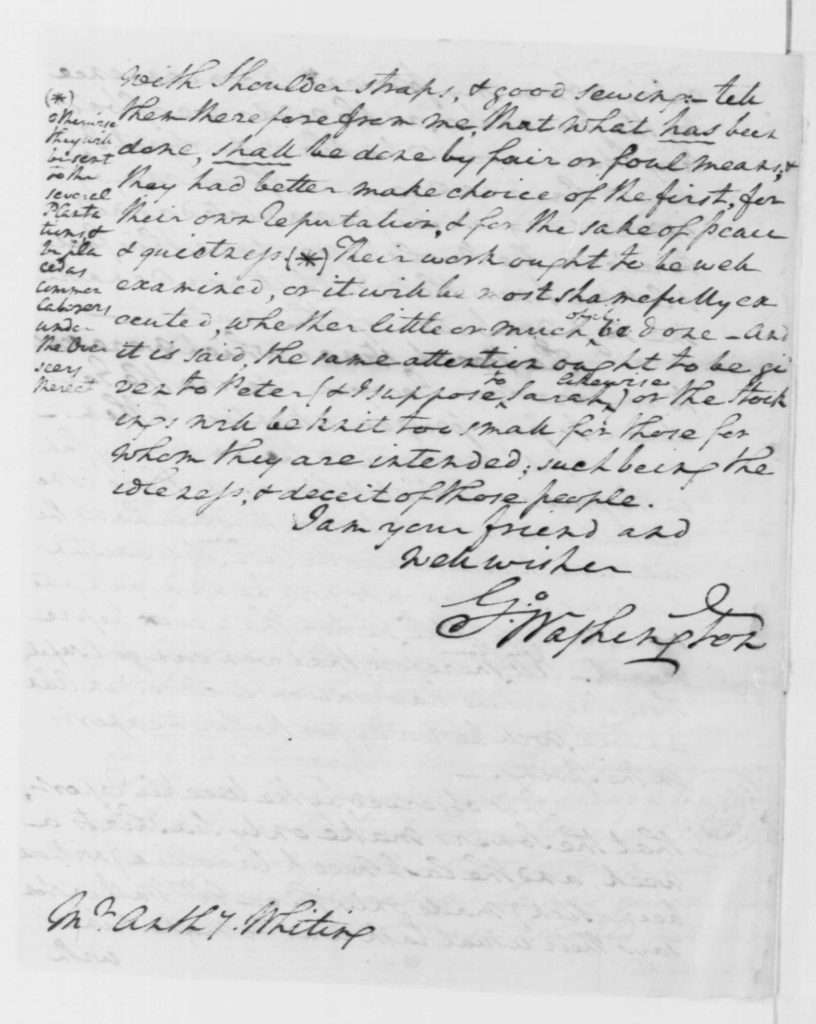 with Shoulder straps, & good sewing: tell them therefore from me, that what has been done, shall be done by fair or foul means; & they had better make choice of the first, for their own reputation, & for the sake of peace & quietness. otherwise they will be sent to the several Plantations, & be placed as common laborers under the Overseers thereat[.] Their work ought to be well examined, or it will be most shamefully executed, whether little or much of it be done—And it is said, the same attention ought to be given to Peter (& I suppose to Sarah likewise) or the Stockings will be knit too small for those for whom they are intended; such being the idleness, & deceit of those people. I am your friend and well wisher