The third Booke.
THE PROCEEDINGS AND ACCIDENTS OF
The English Colony in Virginia,
Extracted from the Authors
following, by WILLIAM SIMONS,
Doctour of Divinitie. 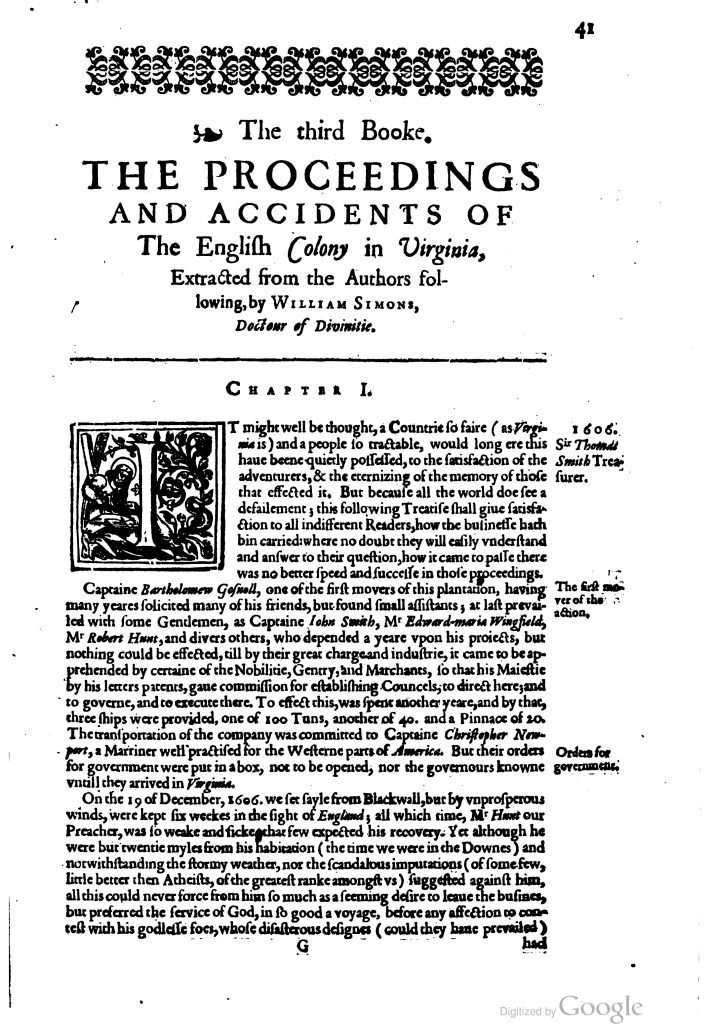 The Generall Historie of Virginia, New-England, and the Summer Isles (1624), Page 41

IT might well be thought, a Countrie so faire (as Virginia is) and a people so tractable, would long ere this haue beene quietly possessed, to the satisfaction of the adventurers, & the eternizing of the memory of those that effected it. But because all the world doe see a defailement; this following Treatise shall giue satisfaction to all indifferent Readers, how the businesse hath bin carried: where no doubt they will easily vnderstand and answer to their question, how it came to passe there was no better speed and successe in those proceedings.

Captaine Bartholomew Gosnoll, one of the first movers of this plantation, having many yeares solicited many of his friends, but found small assistants; at last prevailed with some Gentlemen, as Captaine Iohn Smith, Mr Edward-maria Wingfield, Mr Robert Hunt, and divers others, who depended a yeare vpon his proiects, but nothing could be effected, till by their great charge and industrie, it came to be apprehended by certaine of the Nobilitie, Gentry, and Marchants, so that his Maiestie by his letters patents, gaue commission for establishing Councels, to direct here; and to governe, and to execute there. To effect this, was spent another yeare, and by that, three ships were provided, one of 100 Tuns, another of 40. and a Pinnace of 20. The transportation of the company was committed to Captaine Christopher Newport, a Marriner well practised for the Westerne parts of America. But their orders for government were put in a box, not to be opened, nor the governours knowne vntill they arrived in Virginia.

On the 19 of December, 1606. we set sayle from Blackwall, but by vnprosperous winds, were kept six weekes in the sight of England; all which time, Mr Hunt our Preacher, was so weake and sicke, that few expected his recovery. Yet although he were but twentie myles from his habitation (the time we were in the Downes) and notwithstanding the stormy weather, nor the scandalous imputations (of some few, little better then Atheists, of the greatest ranke amongst vs) suggested against him, all this could never force from him so much as a seeming desire to leaue the busines, but preferred the service of God, in so good a voyage, before any affection to contest with his godlesse foes, whose disasterous designes (could they haue prevailed) 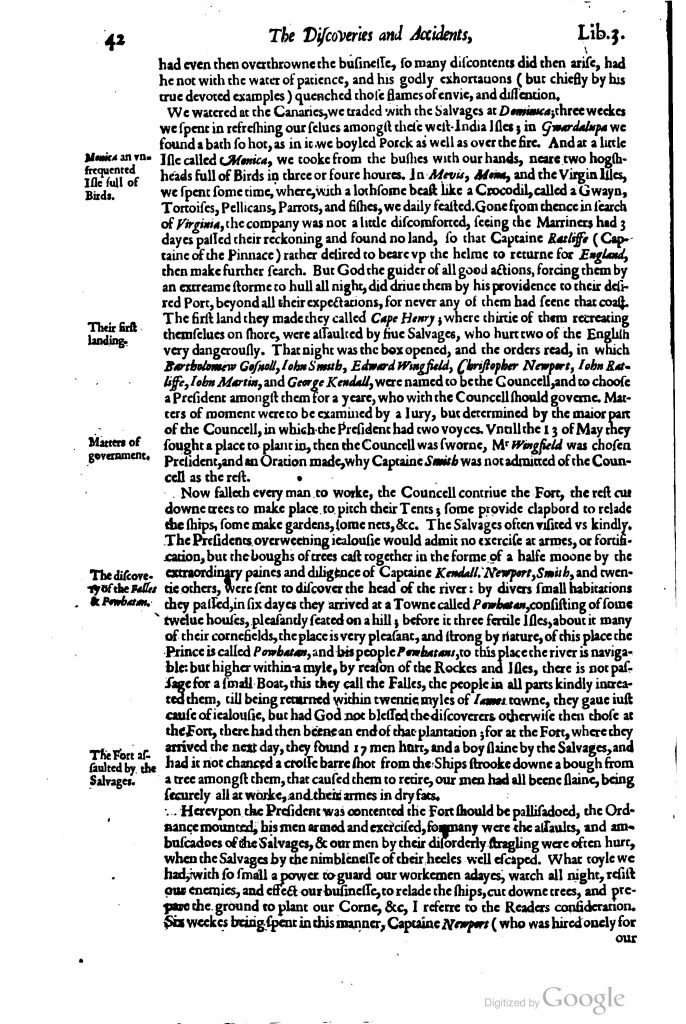 The Generall Historie of Virginia, New-England, and the Summer Isles (1624), Page 42

had even then overthrowne the businesse, so many discontents did then arise, had he not with the water of patience, and his godly exhortations (but chiefly by his true devoted examples) quenched those flames of envie, and dissention.

We watered at the Canaries, we traded with the Salvages at Dominica; three weekes we spent in refreshing our selues amongst these west-India Isles; in Gwardalupa we found a bath so hot, as in it we boyled Porck as well as over the fire. And at a little Isle called Monica, we tooke from the bushes with our hands, neare two hogshheads full of Birds in three or foure houres. In Mevis, Mona, and the Virgin Isles, we spent some time, where, with a lothsome beast like a Crocodil, called a Gwayn, Tortoises, Pellicans, Parrots, and fishes, we daily feasted. Gone from thence in search of Virginia, the company was not a little discomforted, seeing the Marriners had 3 dayes passed their reckoning and found no land, so that Captaine Ratliffe (Captaine of the Pinnace) rather desired to beare vp the helme to returne for England, then make further search. But God the guider of all good actions, forcing them by an extreame storme to hull all night, did driue them by his providence to their desired Port, beyond all their expectations, for never any of them had seene that coast. The first land they made they called Cape Henry; where thirtie of them recreating themselues on shore, were assaulted by fiue Salvages, who hurt two of the English very dangerously. That night was the box opened, and the orders read, in which Bartholomew Gosnoll, Iohn Smith, Edward Wingfield, Christopher Newport, Iohn Ratliffe, Iohn Martin, and George Kendall, were named to be the Councell, and to choose a President amongst them for a yeare, who with the Councell should governe. Matters of moment were to be examined by a Iury, but determined by the maior part of the Councell, in which the President had two voyces. Vntill the 13 of May they sought a place to plant in, then the Councell was sworne, Mr Wingfield was chosen President, and an Oration made, why Captaine Smith was not admitted of the Councell as the rest.

Now falleth every man to worke, the Councell contriue the Fort, the rest cut downe trees to make place to pitch their Tents; some provide clapbord to relade the ships, some make gardens, some nets, &c. The Salvages often visited vs kindly. The Presidents overweening iealousie would admit no exercise at armes, or fortification, but the boughs of trees cast together in the forme of a halfe moone by the extraordinary paines and diligence of Captaine Kendall. Newport, Smith, and twentie others, were sent to discover the head of the river: by divers small habitations they passed, in six dayes they arrived at a Towne called Powhatan, consisting of some twelue houses, pleasantly seated on a hill; before it three fertile Isles, about it many of their cornefields, the place is very pleasant, and strong by nature, of this place the Prince is called Powhatan, and his people Powhatans, to this place the river is navigable: but higher within a myle, by reason of the Rockes and Isles, there is not passage for a small Boat, this they call the Falles, the people in all parts kindly intreated them, till being returned within twentie myles of Iames towne, they gaue iust cause of iealousie, but had God not blessed the discoverers otherwise then those at the Fort, there had then beene an end of that plantation; for at the Fort, where they arrived the next day, they found 17 men hurt, and a boy slaine by the Salvages, and had it not chanced a crosse barre shot from the Ships strooke downe a bough from a tree amongst them, that caused them to retire, our men had all beene slaine, being securely all at worke, and their armes in dry fats.

Herevpon the President was contented the Fort should be pallisadoed, the Ordnance mounted, his men armed and exercised, for many were the assaults, and ambuscadoes of the Salvages, & our men by their disorderly stragling were often hurt, when the Salvages by the nimblenesse of their heeles well escaped. What toyle we had, with so small a power to guard our workemen adayes, watch all night, resist our enemies, and effect our businesse, to relade the ships, cut downe trees, and prepare the ground to plant our Corne, &c, I referre to the Readers consideration. Six weekes being spent in this manner, Captaine Newport (who was hired onely for 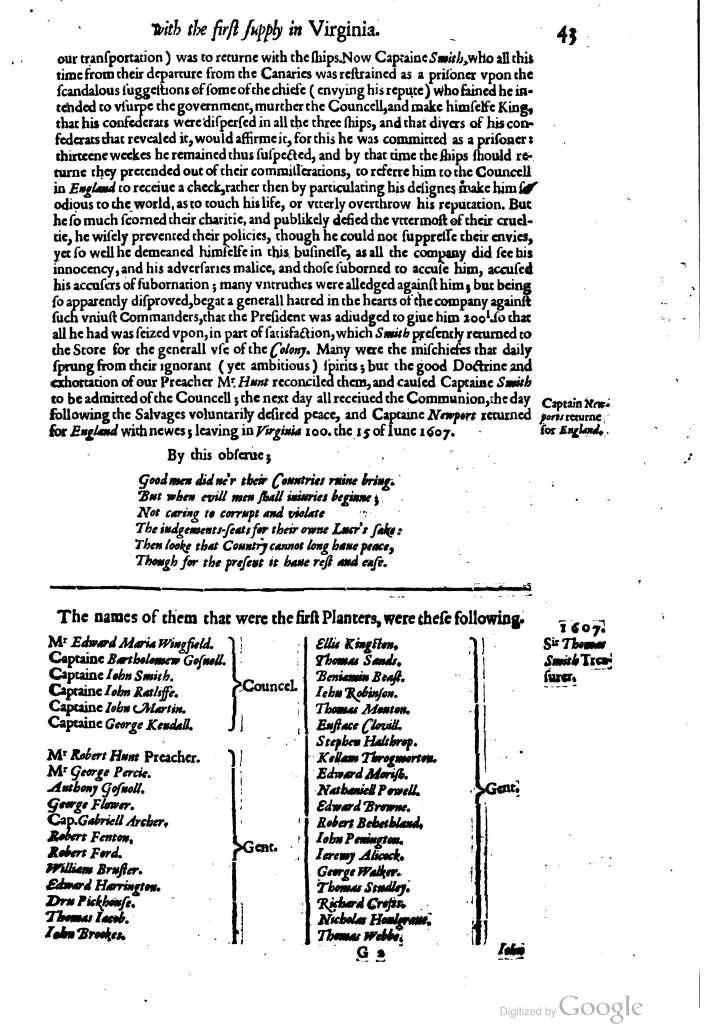 The Generall Historie of Virginia, New-England, and the Summer Isles (1624), Page 43

our transportation) was to returne with the ships. Now Captaine Smith, who all this time from their departure from the Canaries was restrained as a prisoner vpon the scandalous suggestions of some of the chiefe (envying his repute) who fained he intended to vsurpe the government, murther the Councell, and make himselfe King, that his confederats were dispersed in all the three ships, and that divers of his confederats that revealed it, would affirme it, for this he was committed as a prisoner: thirteene weekes he remained thus suspected, and by that time the ships should returne they pretended out of their commisserations, to referre him to the Councell in England to receiue a check, rather then by particulating his designes make him so odious to the world, as to touch his life, or vtterly overthrow his reputation. But he so much scorned their charitie, and publikely defied the vttermost of their crueltie, he wisely prevented their policies, though he could not suppresse their envies, yet so well he demeaned himselfe in this businesse, as all the company did see his innocency, and his adversaries malice, and those suborned to accuse him, accused his accusers of subornation; many vntruthes were alledged against him; but being so apparently disproved, begat a generall hatred in the hearts of the company against such vniust Commanders, that the President was adiudged to giue him 2001. so that all he had was seized vpon, in part of satisfaction, which Smith presently returned to the Store for the generall vse of the Colony. Many were the mischiefes that daily sprung from their ignorant (yet ambitious) spirits; but the good Doctrine and exhortation of our Preacher Mr Hunt reconciled them, and caused Captaine Smith to be admitted of the Councell; the next day all receiued the Communion, the day following the Salvages voluntarily desired peace, and Captaine Newport returned for England with newes; leaving in Virginia 100. the 15 of Iune 1607.

By this obserue; Good men did ne’r their Countries ruine bring.
But when evill men shall iniuries beginne;
Not caring to corrupt and violate
The iudgements-seats for their owne Lucr’s sake
Then looke that Country cannot long haue peace,
Though for the present it haue rest and ease.

The names of them that were the first Planters, were these following. 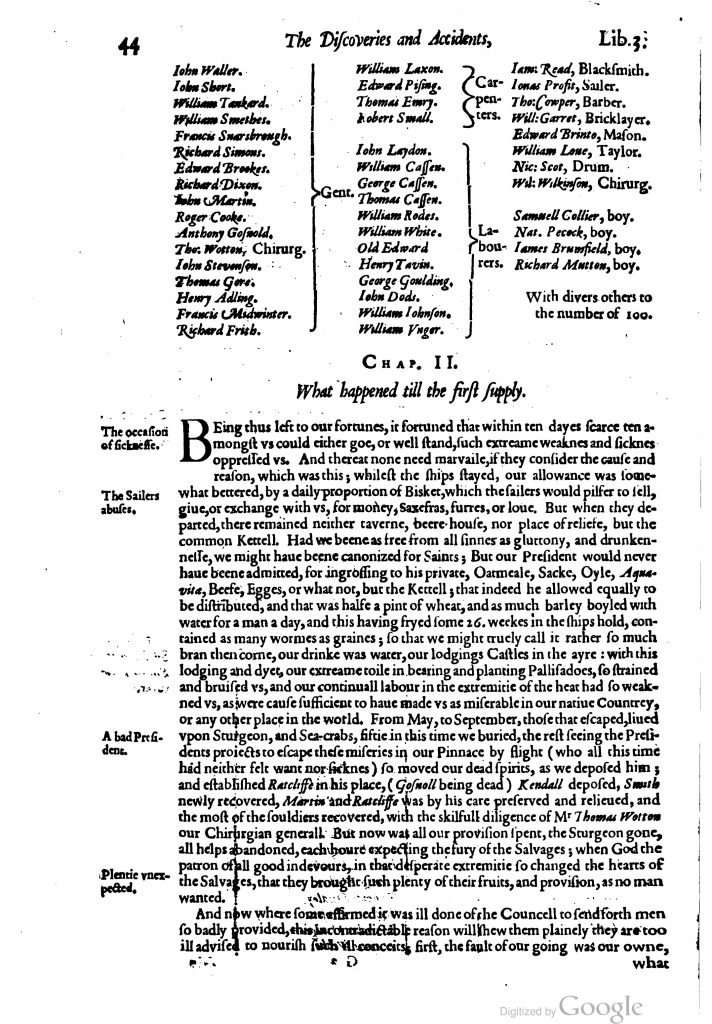 The Generall Historie of Virginia, New-England, and the Summer Isles (1632), Page 44