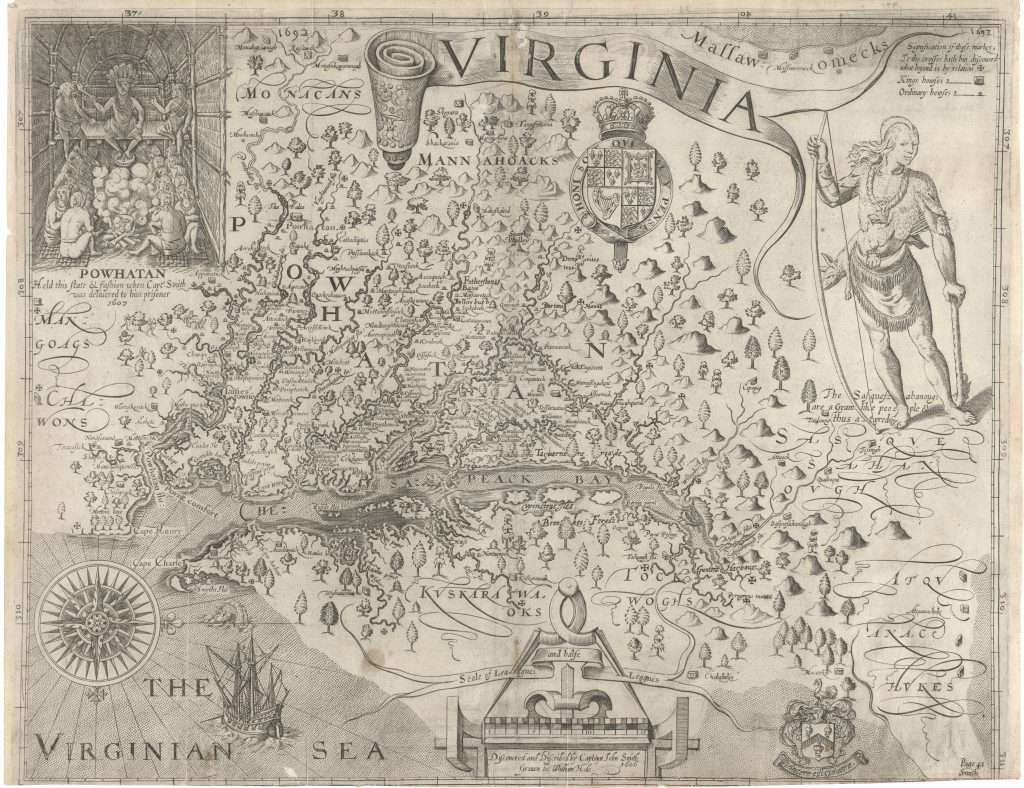 John Smith’s map of Virginia, first published in 1612, provides an early, if incomplete, record of the names and locations of towns occupied by the Algonquian-speaking Indians of Tsenacomoco, as well as other tribes. The map shows a large number of Indian towns located in Virginia’s coastal plain, or Tidewater region, which extends east from the falls of the James River to the Atlantic Ocean and is characterized by a network of rivers and streams.

Most of the towns and all of the principal towns, or capitals, Smith recorded on his map were located along these waterways. Streams were central to Indian towns, serving as sources of food and drinking water as well as avenues of transportation. In addition, the low, flat terraces of alluvial soils at the waterfronts were more fertile and better for growing corn than the soils in the forest. Comparing the locations of the towns on Smith’s map against soil surveys by the U.S. Department of Agriculture reveals that Indian women, who were responsible for farming, had already discovered the best locations for growing food. 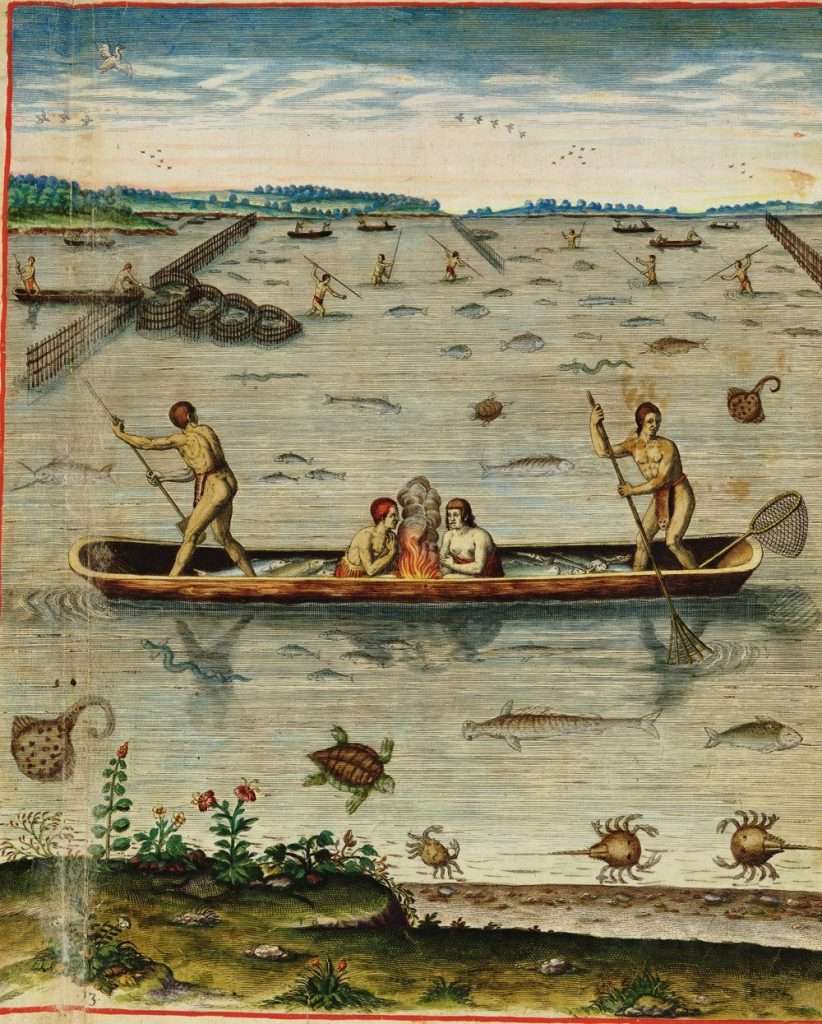 Smith’s map has a profusion of place-names, but his “warrior counts” for the districts show relatively few people to occupy so many towns. One explanation is that Smith gathered most the information for his map in the summer, when Virginia Indians typically lived in several places at once—staying briefly in their farming towns to weed crops and then traveling to various named camps to fish, hunt, and forage. Recorded town sites located on a cliff or in a marshy area, for example, would have been camps, not towns. Above the fall line, a region the English heard about largely from Indian testimony, Smith recorded far fewer towns, and these are likely to have been political centers or farming towns, rather than camps.

Another explanation for the warrior counts, supported by the writings of other English settlers, is simply that Indian towns were not densely populated by English standards. Gabriel Archer said of the James River area below the falls that most towns had a population of between forty and fifty people, while English interpreter Henry Spelman wrote that “ye greatest toune have not above 20 or 30 houses in it.”

Virginia Indian town layouts took two forms: one is what anthropologists call a dispersed settlement pattern, the other, a nucleated settlement pattern. In the dispersed settlement town layout the houses were, as Smith put it, “in the midst of their fields or gardens which are small plots of ground … but a little separated by groves of trees.” The English colonist and writer William Strachey added that the houses stood “dissite [sited or lying apart] and scattered, without forme of a street, far and wyde asunder.” This type of layout was a result of the Indian practice of building houses near their fields. And because Indian farmers practiced shifting cultivation (the system of working land and then abandoning it when the soil loses fertility), Indian residences and towns moved, amoebalike, along the banks of the waterways to wherever there was good farmland. The Indians moved their houses or built new ones near new fields, abandoning their previous residences and land. 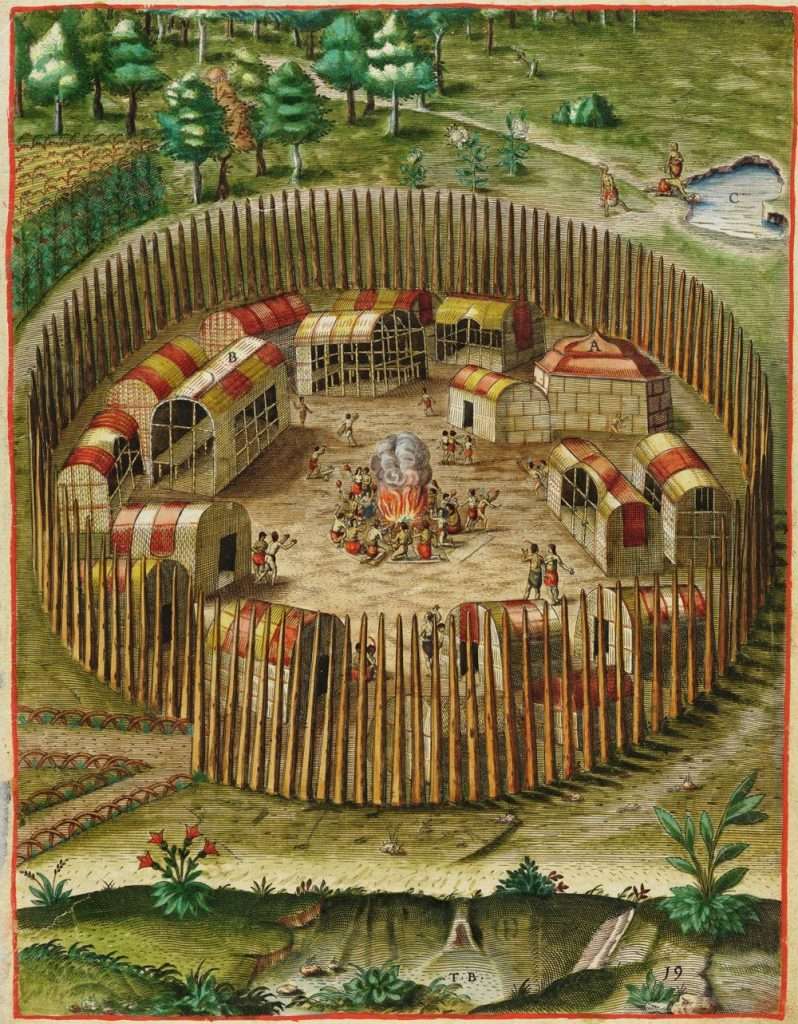 Nucleated settlement patterns were recorded or have been found by archaeologists in frontier areas, where the threat of attack from enemy tribes was high. In a nucleated settlement, a palisade surrounds a tightly packed group of houses; outside the palisade are small, scattered farming hamlets in a hinterland. Typically, a tribe’s most important members lived within the palisade; the outlying farmers took refuge in the nucleus of the town during enemy attacks. Smith described the palisades as consisting of “poles and barks of trees.” Indian palisades were of a different construction than the side-by-side pole palisades of the English, which required so many logs as to be practical only for people using metal cutting tools, which the Indians lacked. The Indian versions used fewer poles and were built by driving stakes into the ground at intervals of a few inches. An outer covering of bark shingles was then lashed onto the stakes. (English artist John White‘s eyewitness painting of Pomeiooc, an Algonquian town in present-day North Carolina, depicts an unfinished Indian palisade.) The bark covering was not meant to stop enemy arrows—it couldn’t—but rather to make it impossible for enemy sharpshooters to aim between the uprights. The town had a baffle entrance, crafted to disorient armed enemies and to force them to enter with their vulnerable left side exposed (most Indian warriors, like most modern people, were right-handed). These fortified towns moved only when the best farmland was so far away as to prohibit cultivation. 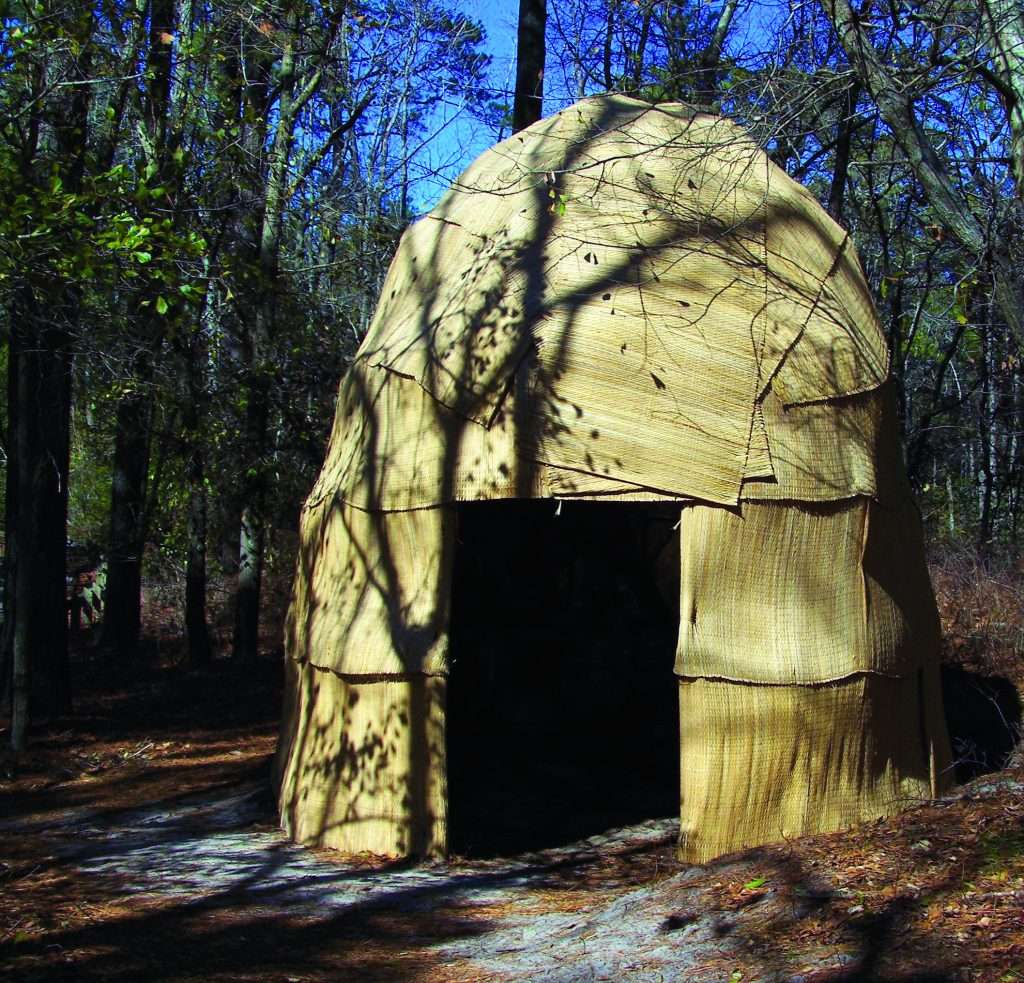 In the Mid-Atlantic region, the archaeological footprints of nucleated and dispersed-settlement Indian towns have one thing in common: because the houses (and palisades, if present), made of long sapling poles and woven-reed mats or bark, were biodegradable, and therefore rebuilt or replaced at intervals, the posthole patterns they left in the ground can be confused. Several palisade lines, showing rebuilds or redesigns, have been found at some town sites. If a nucleated town was occupied for a long time, there may be so many overlapping posthole patterns that no one residence can be discerned. Posthole patterns from discrete houses can be seen in dispersed settlement towns, sometimes oriented end-on toward the prevailing winds in their location, but scholars cannot be certain that all of the structures were standing at the same time. Dispersed settlement towns can also cover long stretches of waterfront, making them all but impossible to excavate completely.

Living in small towns is not always easy. For Virginia Indians, this was exacerbated by the dearth of visual and sonic privacy afforded by their sapling-and-mat houses and by the tremendous societal pressure for each community member to stay within a prescribed role. The Indians worked within a network of kinsfolk; everyone was brought up to know where he or she fit in, and the survival of the community depended on each member, regardless of sex or age, playing his or her part. The network could be wondrously supportive at times—and irritatingly constricting at others. Because there was no government safety net, maintaining good relationships with relatives and fellow townspeople was vital. 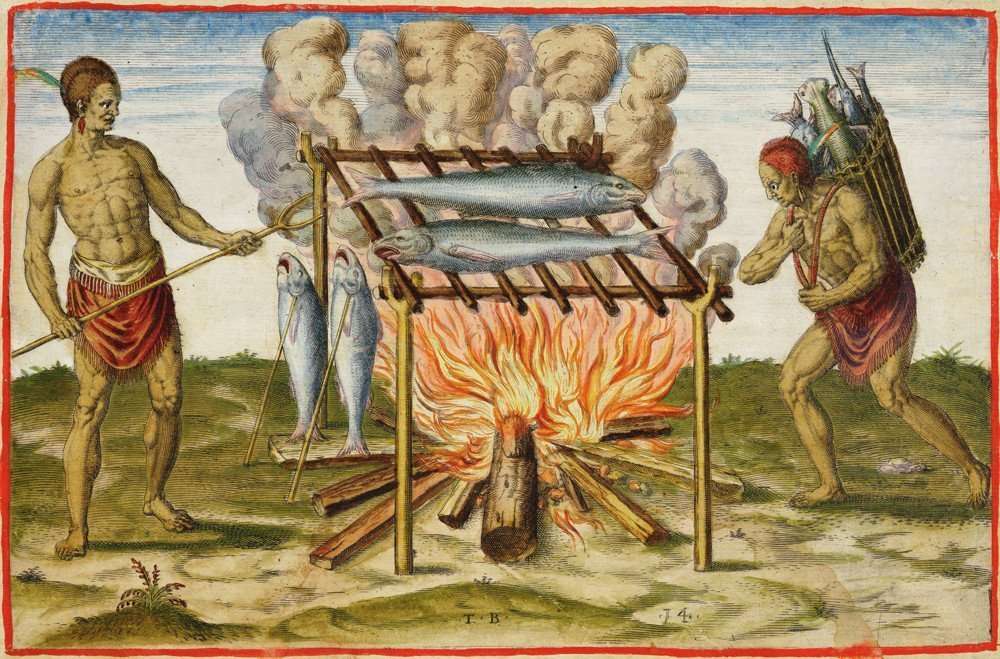 A number of factors pressured townsfolk to work together smoothly day after day, even if they had widely divergent personalities. The most important factor was the aforementioned kin ties (by blood and by marriage). A second pressure toward cooperation, as well as toward hard work, was the nature of their diet. Most of their food had to be foraged, caught, or dug up and then carried home. There was no refrigeration and no canning; most of the food that was gathered each day was consumed before bedtime. Indian communities had to stay alert to what foods were available, share the information (on most days, food-getting would have been the topic of conversation), and work steadily with family members to procure it.

Yet another factor enjoining cooperation in the towns was the threat of attack from enemy tribes. Sharing a common enemy binds people together, even those who have been at odds a short time before. The residents of Indian towns had an us-versus-them attitude born of firsthand experience. Long-term feuds with enemy tribes would have been another frequent topic of conversation in Indian towns.

Virginia Indians developed ways to minimize conflict among community members. First, their society placed great importance on manners and politeness. Stoicism was a large part of this: people kept their thoughts to themselves. And they took their belongings outside of town altogether—Strachey observed, “Their Corne and (indeed) their Copper, [iron] hatchets, [iron] Howes, beades, perle and most things with them of value according to their owne estimation, they hide one from the knowledge of another in the grownd within the woods, and so keep them all the year, or untill they have fitt use for them … and when they take them forth they scarse make their women privie to the storehowse.” Powhatan’s multiple storehouses, in 1610, were located three miles from his then-capital Orapax. 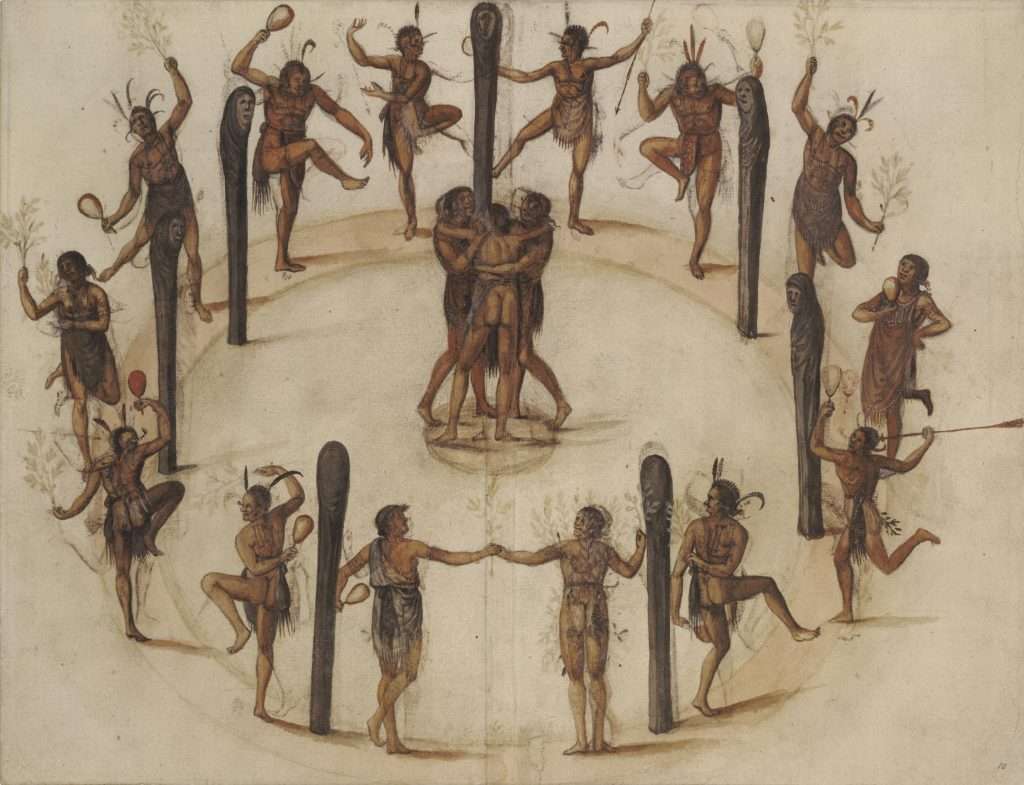 Second, the townsfolk danced and sang together nightly on the dancing ground present in each Virginia Indian town. This activity served as an outlet for any excess energy or irritation that may have accumulated during the day. Group entertainment that required a coordinated effort was also typical in English and other cultures at that time; spending an evening this way could raise endorphins and calm the spirit.

Altogether, Indian town life was intensely social, which had benefits and drawbacks: residents were aware of the supportive network, but also of the limitations on acceptable behavior. As long as they met societal expectations—not giving rein to negative feelings in public, or doing anything to incur censure—town life could be pleasant, and far less constricted by a class system and insistence on religious orthodoxy than in contemporary European societies. 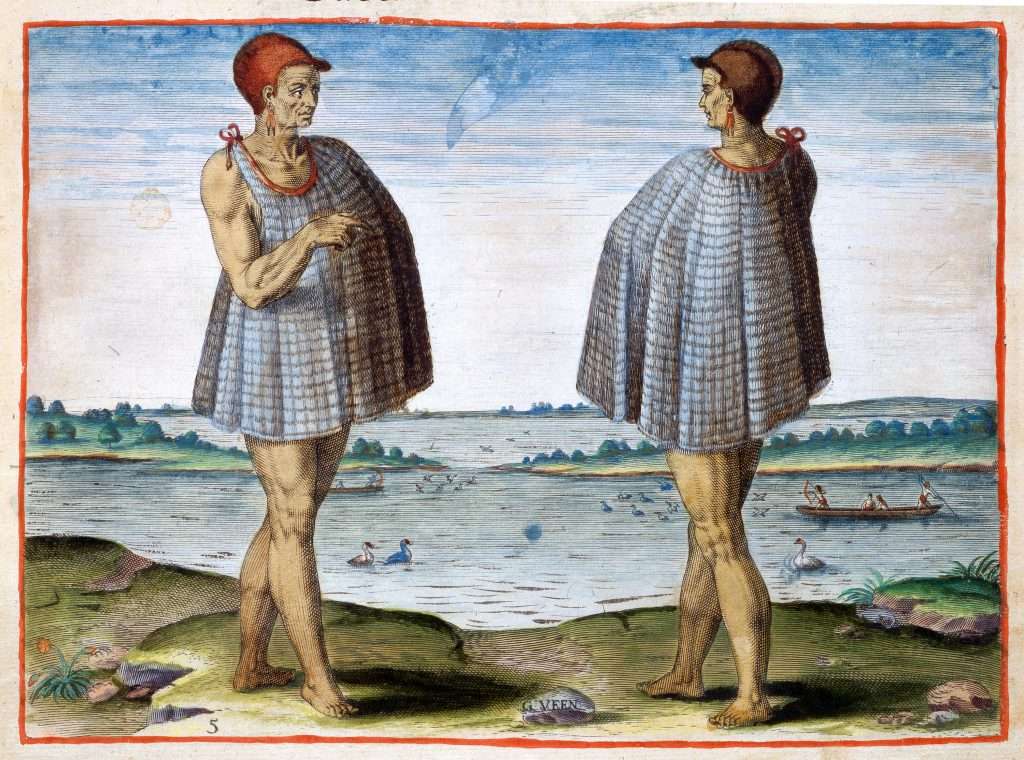 The quality of life in Indian towns declined after the English arrived and began to encroach on Indian land. Life in general became much less secure. During the seventeenth century, Indian populations in Virginia steadily decreased, while the incidence of nucleated, palisaded towns—called “forts” in the English records—increased. Virginia Indians now had to defend themselves against a new foreign enemy. An anonymous English clergyman, writing late in the seventeenth century, reported that the Indian priests, “the wisest men amongst them, whom they call conjurers; who consult their God about the success of their wars and other affairs. They say that though their God can tell them when their neighbouring Indians have any design upon them, yet he cannot acquaint them with the designs of the Inglish.” Ironically, Indian peoples’ continued insistence on living in towns, while English settlers spread themselves thin on plantations, may have contributed to English fears of local Indians long after they had ceased to be an actual military threat.

Some Indian towns survived into the 1700s and beyond, usually on sites or creeks or roads the English dubbed “Indian Town.” Two “Indian towns” survive in Virginia today—the Pamunkey Reservation and the Mattaponi Reservation. In the traditional Algonquian dispersed settlement pattern, the houses face toward the paved roads and the structures are never exactly opposite to one another.